Black Desert’s mini-map looks like a miniature version of a satellite map, and it has various information for convenience.

Just by looking at the mini-map, you can see the surroundings at once. 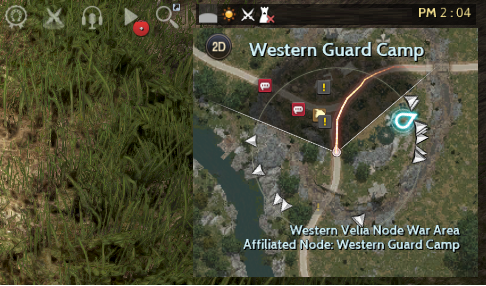 How to view a mini map?

The mini-map displays all NPCs including villagers, guards, monsters, tiny animals, and much more.

There are approximately 40 kinds of NPC display icons, and you can see their names when you hover over the icons.

If there is a quest, the region where the quest can be done is also displayed in a form of a yellow circle. For NPC mark, the front 120 degrees which is the camera’s point of view can be seen clearly, but the rest looks very blurry.

The types and shapes of the icons displayed on the mini map are as follows.

In the mini-map UI, you can adjust the scale and brightness.

To adjust the scale of your mini-map, put the mouse pointer on the mini map and scroll with mouse wheel or click ‘+’ and ‘-‘keys.

By pressing the '+'button or by turning the mouse wheel up, the mini-map will be zoomed in for a closer view

By pressing the ‘-‘button or by turning the mouse wheel down, the mini-map will be zoomed out for a wider view.

Press the small button at the bottom right of the mini-map to return to the original status.

Adjust the transparency with the control buttons on the right side of the mini-map.

The triangle button on the lower left is used to adjust the size of the mini-map, and it can be adjusted by dragging the mouse.

The Magnifier button on the upper left is Find NPC button.

The NPCs you've met so far are organized by region and you can easily find it by using the search function.

If you hover over the NPC name, you can see the activity time, amity, amity compensation, contribution point rental items, and more. If you click on the name of the NPC, the navigation to the NPC will be displayed. 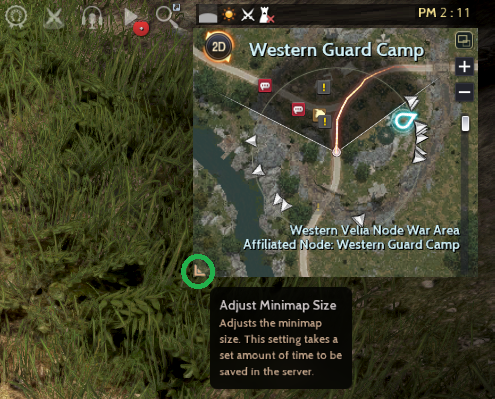 Time Bar is located above the mini-map and displays the information about the region in addition to the time within the game. The following information can be identified in time bar.

• Icons: Displays areas where it is raining or where fort and command posts can be built.

- Aerial: Movement Speed is Base speed

- Snow road: Movement Speed is slowed down to 80%.

- Desert: Movement Speed is slowed down to 80%.

• Area State: There are four types according to PvP status and penalty.

- Safe Zone: This area is not affected by PvP, and it can be the basic resurrection point.

- Combat Zone: This area is where monsters appear and can have PvP.

- Arena: The death penalty is not applied even if PvP is done, and is generally located at central villages. And Instant resurrection is freely allowed without durability reduction.

• Name of Area: Displays the name of area

• Server Info: Displays the current server information where you are located. When you click it, a selection window where you can move to other channels.

• Time: Represents in-game time which allows our adventurers to know whether or not the NPC is working now, or whether it is possible to use the Black Market.