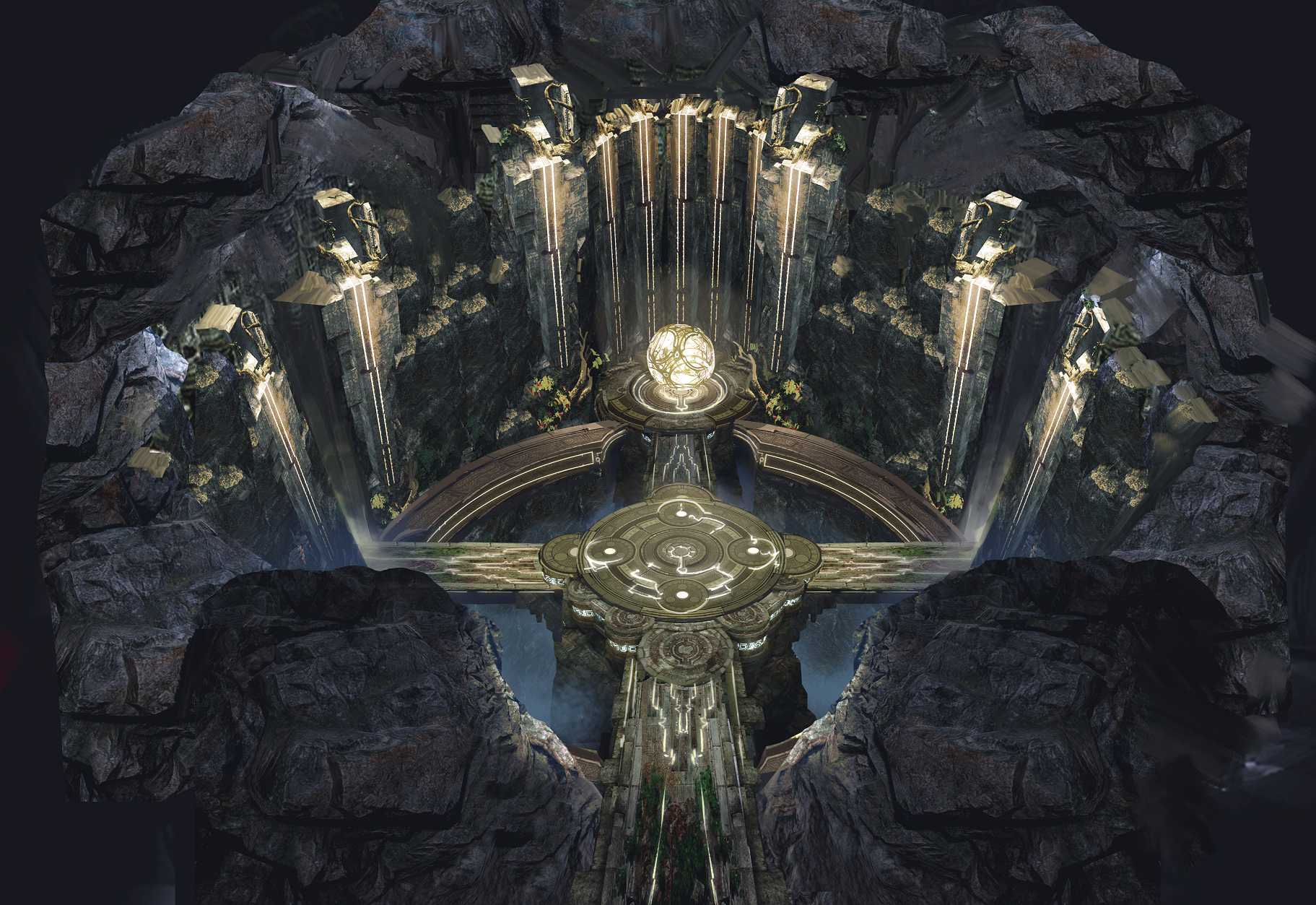 ● Atoraxxion - Vahmalkea, the Last Stronghold built to fend off the dark invaders, has been discovered.
- Added the Black Spirit main quest "[5-person Co-op] The Last Stronghold, Atoraxxion" to begin your expedition to Vahmalkea. The requirements for this quest are as follows:
- Lv. 57 or higher
- Completed the questline "Invitation from I"
- Completed either the awakening or succession questline
- You can continue to enter Atoraxxion after obtaining the Knowledge about "Talibre's Tear" and "Talibre's Door" which can be obtained during the Atoraxxion main questline by going to the Ancient Stone Chamber and making more of the item "Talibre's Tear."
- Created a new Knowledge category for Knowledge pertaining to Atoraxxion Vahmalkea.
- The quest "[Atoraxxion] Vaha's Time Capsule," which is the last quest in the main questline "[5-person Co-op] The Last Stronghold, Atoraxxion," can only be completed once per family.
* If you wish to return to the Ancient Stone Chamber while in Atoraxxion, you can go to the first Sol Magia located at the entrance of Vaha's Sky and interact with it by selecting "[Teleport] To the Ancient Stone Chamber."

The Atoraxxion main questline requires five Adventurers to proceed as it is very difficult for a single Adventurer to complete on their own. Additionally, we have added voice-overs to all the major lines for the first time in Black Desert history to help our Adventurers get truly immersed in this content. We wish you good luck on your adventure with the adorable member of the Secret Guards, Yaz!
● Atoraxxion Vahmalkea is mostly made of normal fields. Adventurers will be able to see other Adventurers that are in the same server. However, the final boss "Apex Lucretia" in Vahmalkea is in an instanced area, so Adventurers will have to focus their efforts to defeat it with their party.
- In the normal field of Vahmalkea, you will see elite Ancient Weapons (marked with the star icon on the minimap). They are called: Cetus, Monoceros, Lacerta, Creomar, and Putrakium. Each of them have a particular weakness that will allow you to defeat them quickly. Additionally, the bosses Krahtenn and Ahtenn that appear can be defeated using special tactics.
- The final boss "Apex Lucretia" is extremely powerful. It is crucial that you work together with your party to defeat it. You will not be able resurrect while combat is ongoing. When all party members die, the fight will reset and the party will be able to try again.
- Death penalties are applied when characters die in the normal fields. However, death penalties will not apply to deaths against the final boss "Apex Lucretia."

The ultimate goal in Atoraxxion Vahmalkea is to enter and defeat the final boss. You will need to fight the regular ancient weapons to get items that act as keys to the next area. Progress through each of these areas to eventually reach "Vaha's Cradle" when the final boss awaits our Adventurers. Also, you can log into an Elvia Realm Server to fight against even more difficult ancient weapons and the final boss "Apex Lucretia." Therefore, we recommend getting used to the normal version first before going into the harder Elvia Realm version. P.S. - Here's a small tip for our Adventurers entering Vahmalkea with their party: You can press SHIFT+` to ping a location for your party in Vahmalkea!
● Atoraxxion Vahmalkea is divided into multiple areas by the "Darkened Dawn" (a type of wall) to fend off the dark invaders more effectively.
- Each of these areas are blocked off from each other through an ancient piece of tech called "Sol Magia." To take control of the "Sol Magia," you will need special items that act as keys.
- For the party to challenge the final boss "Apex Lucretia" in "Vaha's Cradle," all the five party members must be in possession of the item "Lucretia Dagger." 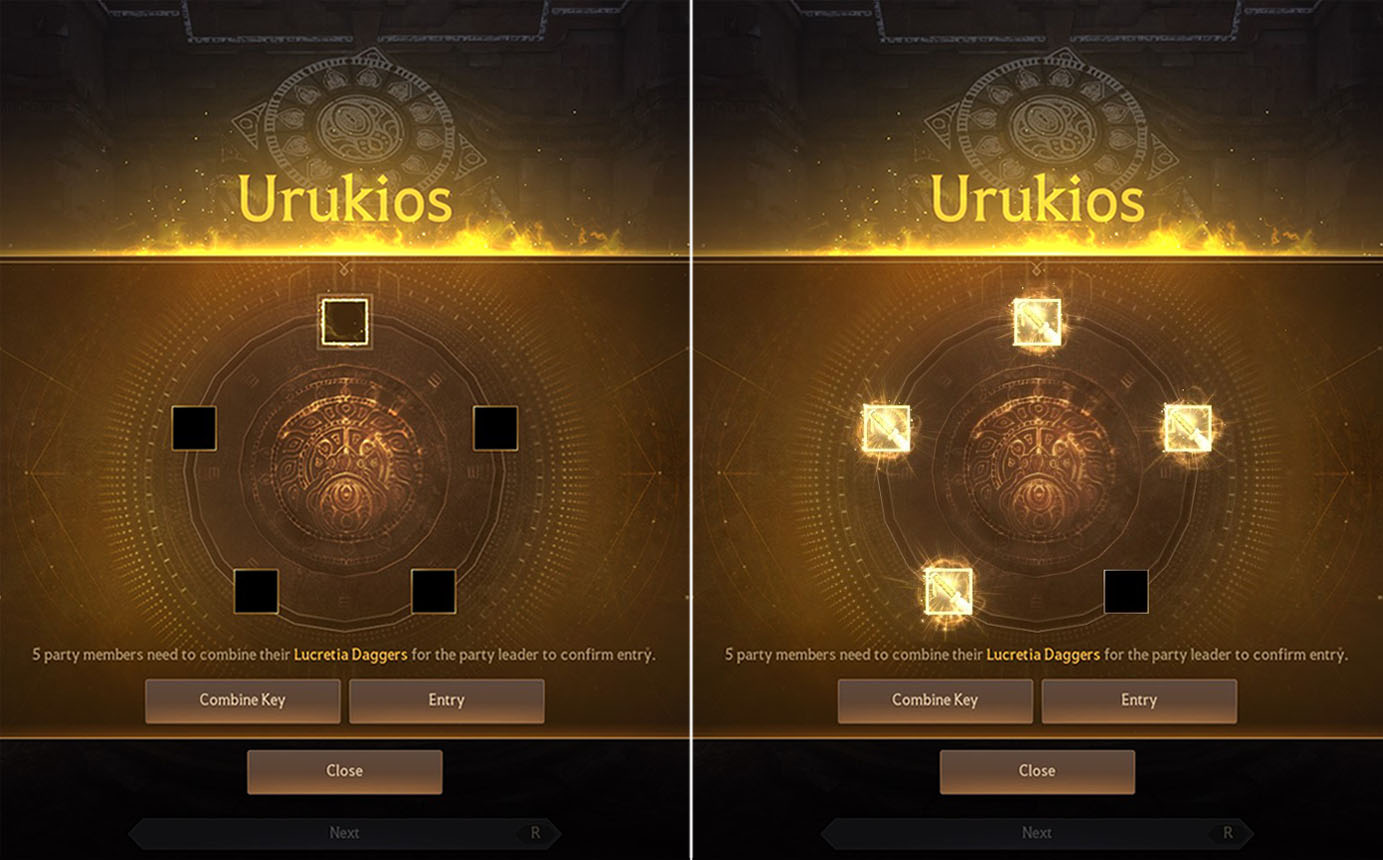 * All the loot obtained from Atoraxxion (except the item "Lucretia's Dagger" and the loot dropped by the final boss "Apex Lucretia") will be removed once you leave "Vaha's Paradise," which can be entered after defeating "Apex Lucretia."
- The party leader must have the required key items to take control of the "Sol Magia" (except for the item "Lucretia Dagger").
- The method of obtaining the required materials are as follows:
* Krahtenn appears at a set chance while Adventurers defeat regular ancient weapons in Vaha's Heart.
* The drop rate for each of the materials required are affected by item drop rate buffs.
● "Vaha's Cold Thorn" is a currency in Atoraxxion Vahmalkea that is obtained from defeating Ancient Weapons. It can be exchanged for various items at the Atoraxxion Exchange. Atoraxxion Exchanges are located in Vaha's Sky and Vaha's Heart.
* The three types of party elixirs that can be gained in exchange for "Vaha's Cold Thorn x5" can only be used in Vahmalkea. However, they cannot be used in Vaha's Cradle where "Apex Lucretia" is located.
● Vaha's Spear has been activated in Vaha's Sky and Vaha's Query of Atoraxxion Vahmalkea as dark invaders were detected.

Vaha's Spear is a trap device that can be found in the earlier areas of Vahmalkea. Adventurers will need to keep their eyes peeled for these devices while venturing through Atoraxxion Vahmalkea.
● The normal fields in Atoraxxion are different from other monster zones in that you will not get loot from the regular ancient weapons. The only monster that drops loot is the final boss. Additionally, after defeating the final boss "Apex Lucretia," you will be able to obtain "special loot" in Vaha's Paradise twice a week.
- The "special loot" can be obtained by completing the following quests with the "Vaha's Time Capsule" that protects Vaha's Paradise.
- You cannot repeat the quest with a character that has already completed one of the above three quests.
- The item "Key of the Sunless Dawn" required to complete the above quests is obtained from defeating the final boss of Vahmalkea, "Apex Lucretia."
- The items "Lucretia's Imperfect Ruby" and "Lucretia's Chipped Ruby" required to complete the above quests are obtained by completing the quest below.
- You will need 20,000 Agris Fever Points to accept the quest. The 20,000 Agris Fever Points will be consumed immediately when the quest is accepted. You cannot get the points back by forfeiting the quest.
- The above quest is a weekly quest that can be accepted again 7 days after it has been completed. You will receive Lucretia's Imperfect Ruby x1 and Lucretia's Chipped Ruby x1 as the quest rewards.
- The above quest is completed through the Sol Magia found in Vaha's Garden (the area before Vaha's Cradle, where the final boss "Lucretia" appears). You will not be able to complete this quest once you enter Vaha's Cradle. If you did not complete this quest before entering, you will need to return to Vaha's Garden again.
● Here is the list of items that can be obtained by opening the Vahmalkea Chests.
- The items "Maha's Fragment" and "Dehkima: Token of the Oath" can be exchanged for the following items through the Old Moon Managers in each city and town.
* The new item "Vaha's Dawn" can be obtained by processing an earring accessory, "Golden Tears of the Desert," and "Melody of the Stars" together. "Melody of the Stars" can be obtained by heating an enhanced blue accessory.
● A Sol Magia with damaged records was discovered in Atoraxxion Vahmalkea - Vaha's Sky. The archaeologist Lafi Bedmountain believes it can be repaired with the Knowledge scattered across Vahmalkea.
- Added The following quests to Atoraxxion Vahmalkea that can be completed once per family.
- Vahmalkea Knowledge includes the Knowledge under the following categories:
● Added titles that can be obtained from Atoraxxion Vahmalkea.
- The following titles can be obtained by progressing through Atoraxxion Vahmalkea.
- The following titles can be obtained by defeating Atoraxxion Vahmalkea monsters in normal servers.
- The following titles can be obtained by defeating Atoraxxion Vahmalkea monsters in Elvia Realm servers.
● Added a season character exclusive Atoraxxion.
- You will enter the Season Atoraxxion if you enter Atoraxxion while on a Season Server.
- Season Atoraxxion can be attempted by Adventurers with DUO (II) Tuvala gear or higher.
● Added a new weekly Atoraxxion quest for season characters.
* The above quest can only be accepted and completed by season characters that are Lv. 57 or higher.
- You can obtain the following items by opening the "Vahmalkea: Rift Chest."
● During the event period (July 21, 2021 (Wed) after maintenance - August 4, 2021 (Wed) before maintenance), accepting the quest "[Weekly] Trace of a Moment Left by Vaha" from the "Vaha's Time Capsule" on a normal server Atoraxxion will consumed 10,000 Agris Fever Points instead of 20,000 points.
● Added three new Challenges that can be completed in Atoraxxion Vahmalkea.
- The rewards for these Challenges can be collected once per family.
- You can collect the Challenge rewards by logging with a character that has the Knowledge that is learned after defeating Apex Urukios in Atoraxxion Vahmalkea.
- The following Challenges can be completed on the season and normal servers:
* These Challenges can be completed by defeating Apex Urukios and learning the Knowledge "On the Lucretia Dagger" either on the season server and the normal server.
* The Challenge "[Season] On the Lucretia Dagger!" can only be completed by a season character, therefore, it must be completed within the Season Server duration.
* You can complete both of the Challenges by learning the Knowledge from either the normal or season server.
- The following Challenge can only be completed on the Elvia Realm servers:

During last year's Calpheon Ball, we introduced Atoraxxion to our Adventurers for the first time. Now, we have finally brough this update to you! Black Desert provides a variety of party content like Savage Rift, Gyfin Rhasia Temple, Altar of Blood, Olun's Valley, and party monster zones for co-op play. Still, many of our Adventurers wanted more party content that was even more fun. Therefore, we decided last winter to create a brand new co-op dungeon. Something that is quite different from all the other content we have released until now. We have contemplated for a long time on how to bring the awesome fun of Black Desert action to co-op play in a natural manner. We are deeply moved by this momentous occasion, where at the end of our long deliberation, we are now able to present to you the results of our struggle. Thank you, Adventurers, for waiting and trusting us. We simply hope you will enjoy it. We will return with our next biome, this one underwater themed: ""Sycrakea.""