Change the Course of War: Militia!

Change the Course of War: Militia!

Choose a side, join the Militia, and show off your skills and strategies in the Conquest Wars.

Every week, Guilds fight over the right to rule over their own territory.However, what if you do not belong to one of those huge Guilds that fight the big fight?

Conquest Wars used to be a content for the more “prepared” Adventurers and Guilds. A Guild participating in a Conquest War requires a great deal of preparations and conditions to be met.

Militia has opened Conquest War for more Adventurers than ever before.

To excel in the Militia, experience in item farming and PvP fights is recommended.

Anyone who is a member of a Guild and has a combined AP and DP of 400 or higher can register for the Offensive Militia.

A Militia is a group of Adventurers solely recruited for a Conquest War.

Let’s say there will be a Conquest war in Calpheon today.

If you are in a Guild and your AP and DP combined is over 400, you qualify to register for the Calpheon Offensive/Defensive Militia.

Then you battle it out and if your Militia wins, your guild will get Guild Funds and you yourself with get Silver and Guild Activities Points.

Any Adventurer in a Guild and has a combined AP and DP of over 400 can register for the Offensive and Defensive Militia.

Registration is open every Saturday for 45 minutes starting an hour before the Conquest War:

When registration starts, press [ESC] and select Militia from the menu.

You will be presented with a list of territories where there will be a Conquest War later that night.

Choose a territory, and then choose to fight for either the Offensive or Defensive side.

You will need to be in the 1st server of the territory you want to register with (e.g. Calpheon Conquest War, Calpheon Server 1).

A maximum of 10 members of the same guild will be allowed to register for the Militia per each territory.

However, if that maximum is reached, the members of that same guild can still register for another territory’s Militia.

If you cancel your registration to a Militia, you will not be allowed to register for another Militia that same day. Please make your decision carefully.

After 19:45 (check time table above for your region) you can find out if you were selected for the Militia. 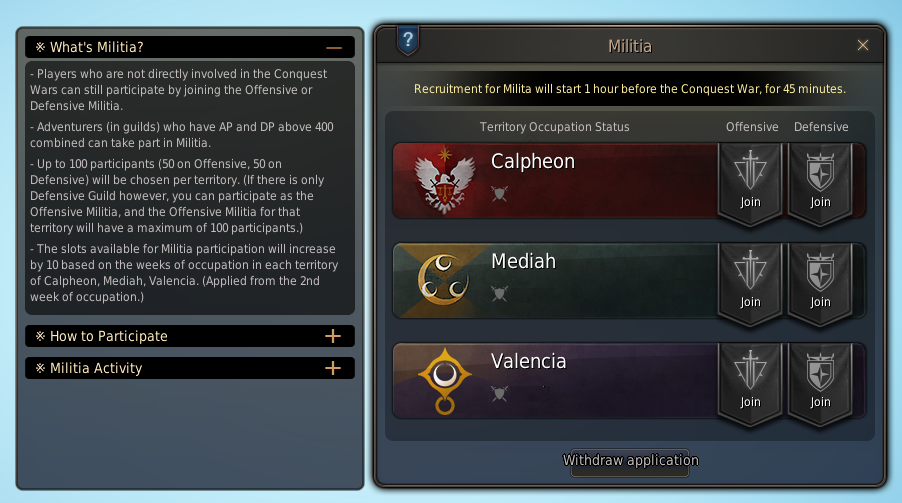 Each Militia group will have a maximum of 50 Adventurers.

If more than 50 Adventurers register, then 50 of them will be selected randomly.

If there are less than 50 Militia registrations in total for a territory, then no Militia will be formed in that territory at all.

There will be some exceptions to the 50 Adventurers maximum:

If there are both Defensive and Offensive Guilds in the Conquest War for that territory, then you can register for either the Offensive or Defensive Militia as usual.

In this scenario, the maximum Adventurers in the Offensive Militia will be raised from 50 to 100.

Also, if the same Defensive Guild has held a territory for over a week, the maximum Adventurers for the territory’s Offensive Militia will be increased by 10 every week.

Fighting in the Militia

Once you have confirmed that you were selected for the Militia, make sure are in the correct server (Server 1 of the territory you will be fighting over).

Click on the [Come Together!] icon located on the left side of the mini map after the conquest war begins to move and join the fight.

For members of the Militia, all Family, Character, and Guild Names will disappear. Militia members will be identified simply as either or .

An icon will also appear above each character’s head.

Militia Icons will additionally be marked by color:

As a Militia member, you can only attack the opposing Militia and Guild.

However, a member of one of the Defensive or Offensive Guilds can turn on Force PvP and attack allied Militia members without decreasing Karma. Therefore, you should be always careful.

Militia will be disbanded when one side if victorious.

Even if the Offensive Militia have met their Victory Requirements and all the Defensive Command Posts are destroyed, there is no guarantee that an Offensive Guild have won the Conquest War.

If there are more than one Offensive Command Post remaining at the end of the Conquest War, the territory will be emancipated.

To successfully defend the Defensive Command Post one of the following conditions must be met:

Castle Gate is not destroyed in 2 hours.

Inner Gate is not destroyed in 2 hours and a half.

Command Post inside the castle is not destroyed in 3 hours

If any of the conditions above are met, then the Defensive Guild and Defensive Militia will be victorious.

Therefore, if the 1st condition has been broken, then Defensive can keep fighting to meet the 2nd or 3rd condition.

If you are killed while fighting in the Militia, you can choose between resurrecting in the nearest Town or designated Militia areas.

However, if the place where you were killed is too far from the Militia resurrection point, you will be resurrected at the nearest Town.

Fighting in the Militia gives you up to 3 hours of focused combat. This gives you the chance to practice your PvP skills, as well as giving you a taste of what participating fully in a Node or Conquest War would be like.

※ Game Guide contents may differ with in-game contents depending on updates and content changes.