Make the [System] thingy to have a separate tab for these announcements, instead of being attached to the [System] (?).

P.S.: It's annoying to have it being flooded by game enhancement failure/successes all the time. I don't want that. 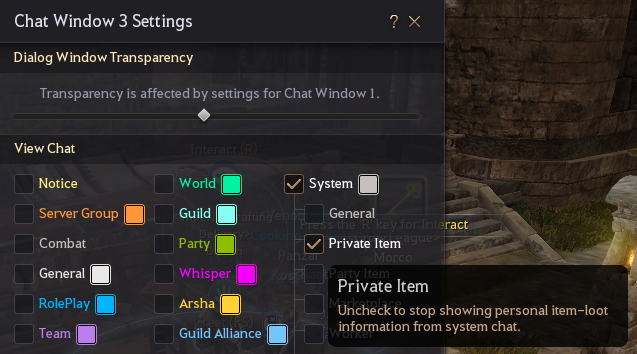 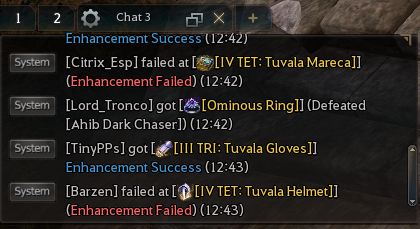 Divide the system options in the chat window, good improvement. I can get behind this.

Its a bug, those messanges should not pop up, they replace messanges in your chatbox because of ~1year old bug  PA don't care to fix ( because dead swamp KR region)

I'm not getting those enhancement messages. I get one when I log in and then no more. Never had issue with that.

I'm not getting those enhancement messages. I get one when I log in and then no more. Never had issue with that.

Because you either don't have any system message allowed in your tab, or lying.

Those messages don't show up, they replace already existing system message in your chat window, yes they replace themself, so if there is no message to replace you never see them.

KR and SEA  both dead regions where amount of playerbase can't generate enough messages to break up buffer to a pont when this bug start to appear. Don't expect this "bug" to be fixed, not a single exqlusive NA/EU bug caused by playerbase was/will be fixed, Developers don't care about any regions beside KR  and SEA.

If you want bug to be fixed, you have to report it  via global lab directly to Korean developers.