Since PA has been made positive QoL to features like the infinite potion. I want to suggest a wardrobe system similar to what I saw in a different game:

What is: A wardrobe would be similar to a "collection" system for costumes and outfits. (a)(b) Where you once you equip and bind a fashion piece, it gets added permanently into the "handbook" (c). Meaning it would be accesible at all times from the Wardrobe UI and removed from your Pearl Bag (d).

Where: This would replace the "Palette" button in your inventory window, as the dye feature would be included in the wardrobe.

Extra: Sell it if you want, just like a Tent that is convenient for remote functions.

How would this sytem be beneficial?

(a) You can preview all outfits and fashion pieces for your character even if they are not available in the pearl shop from a organized list. Weapons included.

(b) Depending on level of completion, titles or similar can be awarded. "Dark Knight Fashionista" "Stylish" "Always Dandy" etc.

(c) This would prevent players from accidentally melting costumes they wish to keep.

(d) Would clear space in your pearl bag.

- Would let you save outfit and dye combinations.

- Would let you filter by owned costumes or use a Search Function.

- Would have a buy button that takes you to the Pearl Shop if the item is for sale.

- Would let you choose bonuses regardless of which fashion piece you are wearing from the pieces you have registered on the handbook. Obviously nothing that you don't already own.

Well to begin with, I don't know why COSMETICS have stats in the first place. But that won't get removed so whatever. Now bear with me while I try to explain this.

I know that you can mix and match for some costumes and the set bonuses up to 8 slots. but it's also kind of wonky, let me show you:

First picture is correct. Second shows that weapons count for these bonuses as I removed my awakening weapon and lost the 8-part bonus. But why is the set in the third picture not giving me the four part bonus? I have enough pieces: helmet, weapon, awak weap and sub-weapon as well as underwear. I understand if it doesn't give me the 6 and 8 part bonus as the Venia Riding attire has its own bonus for occupying 3 slots. And what if I was Succession player and don't wanna waste money buying an awakening weapon skin? Does that limit me? Specially with Classic Outfit boxes, which do not include an awakening fashion weapon, so even if I was an awakening player and I like a classic costume I would need to buy another weapon skin separately. A different can of worms. 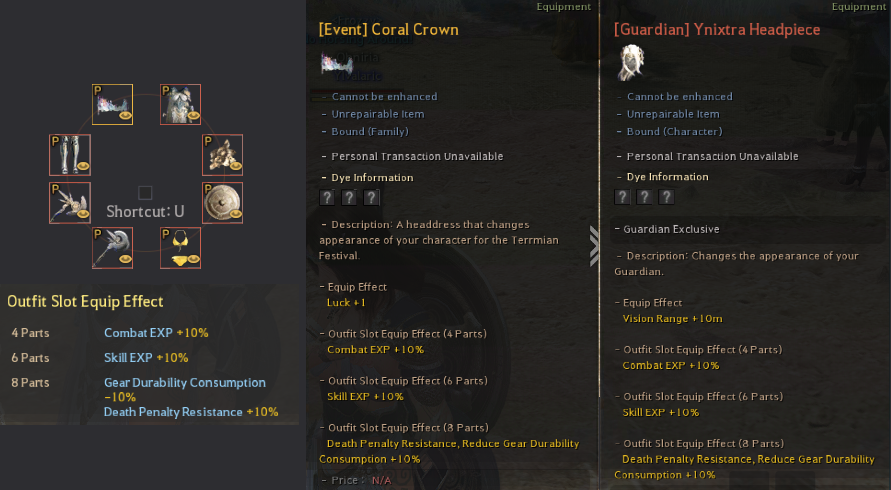 Say that I like my Coral Crown more than my Ynixtra Headpiece, why can I not wear the fashion piece I want without losing the Vision Range +10m. So, I could choose the Ynixtra headpiece effect to take place instead of Luck +1.

Also, why is the specific stat from each piece of gear not listed in the View Set Effect from Equipment Window? #Bug or QoL need? Unsure.

Another example: Some costumes have cojoined parts. Take Mueburus and Marine Romance in which the armor occupies both body and gloves piece. They have two effects:

Death Penalty Resistance +10% and Amity +10% the same effects of other armor/glove pieces. Obviously the only way I could choose the Venia Riding Attire +20% mount EXP would be the trade off. So I swap the DP and Amity + whatever effect my shoes give me for the single buff of Venia Riding Attire. While still able to keep the appereance of Marine Romance.

Now with costumes like Coco set, in which they share the same 4-6-8 part bonuses but also has added benefits in each part, you could trade 1:1 because you already own the coco parts. The tricky part is, in itself the set has an extra bonus for equipping all 4 four parts. Summer effect of swimming speed +42%. Maybe this could be a separate bonus stat you can choose.

Let's be honest, there would be no loss here. The player wouldn't be able to equip or select the Summer bonus effect unless they registered all 4 pieces of the Coco costume in their Wardrobe (which means they can't remove it and sell it afterwards.) There would be no "advantage" on other players because everyone has the same system and just like it does now, it depends on which costumes you already bought/own. So why force players to wear a specific fashion piece for their bonuses?

It goes as far as accesories. I have the [Event] Cherry Blossom Earrings, can't use them cause other earrings from pearl shop and events, such as [Corsair]Ocean's Plume, have a Chance to gain higher knowledge +5%.

Or horse costumes, that could let you have the Movement Speed +1% even if you don't have all equipped all 4 items of the same costume.

But the stats and bonuses suggestion would probably not be welcomed by many, so at least consider the handbook idea for the benefits I mentioned at the start lol

Yeah it would be nice. They could even get rid of the set bonus, doesn't really matter.

Options to toggle on and off pieces of costumes/gear that overrides the coding of costumes.

Option 1. To hide all weapons and display the costume as standard. This would include but not limited to:

Capes for Guardians. Gloves/Sleeves for Sorc, Archer and Mystic, etc

Option 3: Keep your Weaopn skins "equipped" even after using a Fishing rod/etc. Cause at the moment, we have to re-equip our Weapon fashion after we have used any tool that takes the weapon slot.