What exactly am I teaching? Well, it’s about the World Bosses!

To be specific, today’s lesson will be covering the Lord of Corruption, Kzarka! And so, new Adventurers and returning Adventurers alike, it’s time to learn more about Kzarka with me, Daisy!

Beginnings of Kzarka, the Lord of Corruption

Kzarka is Black Desert’s first-ever World Boss, as the Lord of Corruption first graced the Black Desert world during the update on March 30, 2016!

What’s the story behind Kzarka? 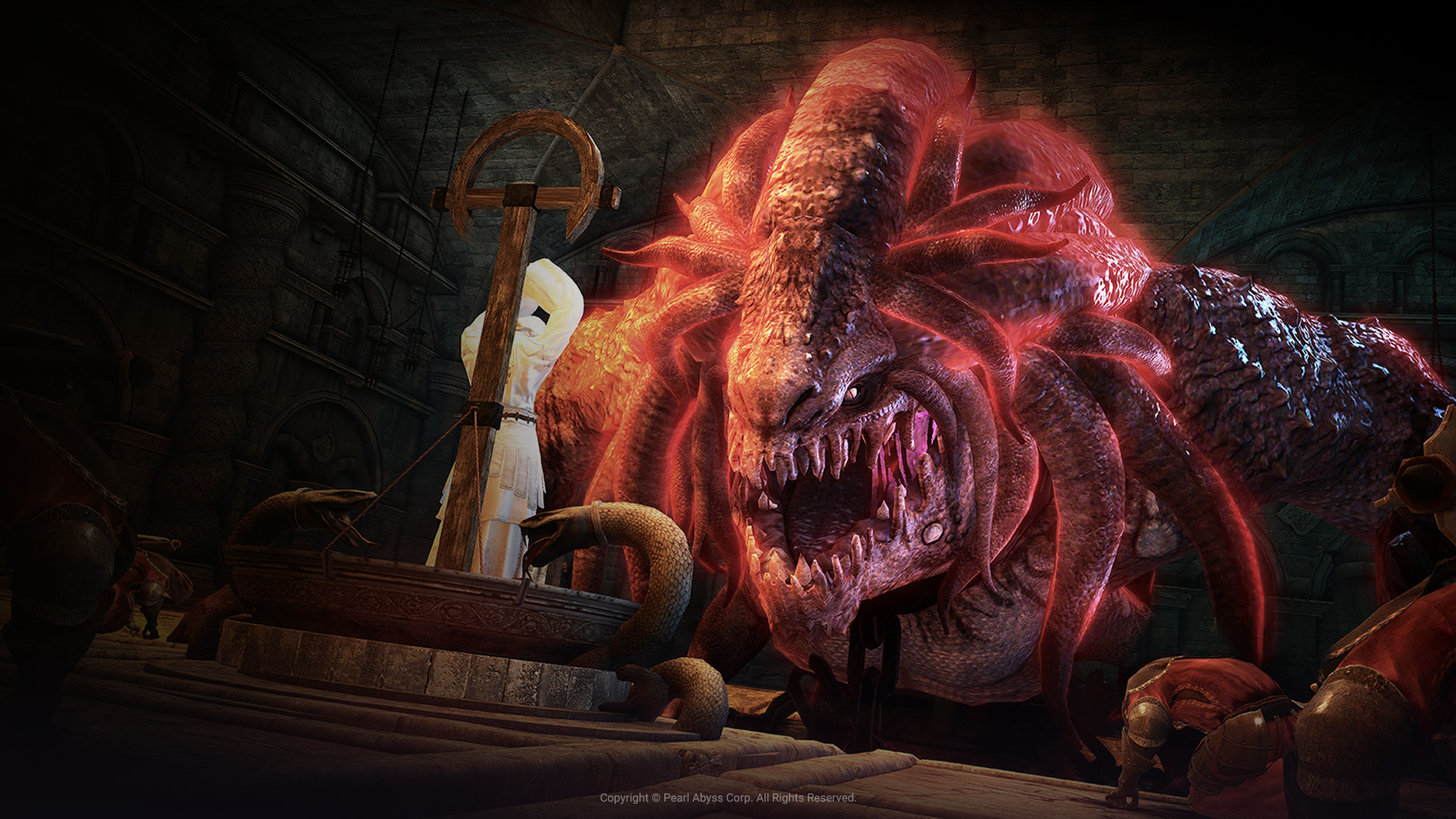 Possessing a destructive might that rivals even that of a god, Kzarka is said to have first awoken in a distant arid land and led a glorious ancient kingdom on a path to ruin. His corruption would spread out across the lands and endanger countless lives until he was sealed away by an unknown sacred organization centuries ago.

The followers of Kzarka, noticing that his seal was incomplete, began to look for a way to unseal their god. This led to the Republic of Calpheon dispatching a unit of Valkyries from the Elion Church to re-seal the partially unsealed Kzarka, but it seems there were untrustworthy figures in their midst...

For the Elion Church, which commanded the Valkyries at the time, tried to subvert Kzarka's resurrection for their own ends under the name of the Fraternity of Light. However, after much contemplation, Enslar—the leader of the Valkyries—ignored their secret orders and re-sealed Kzarka, putting an end to his imminent resurrection!

Of course, this isn’t the end of Kzarka’s story. The witch who triggered the Three Days of Darkness in Mediah is said to be “knocking on the door” of the shrine itself. Meanwhile, Kzarka's cultists continue to look to bring back the Lord of Corruption, and currently occupy regions such as Serendia Shrine, Calpheon Shrine, Bloody Monastery, and the Abandoned Monastery.

Where does Kzarka appear? What rewards do you get for defeating Kzarka?

Here’s an instructional image to answer both questions! 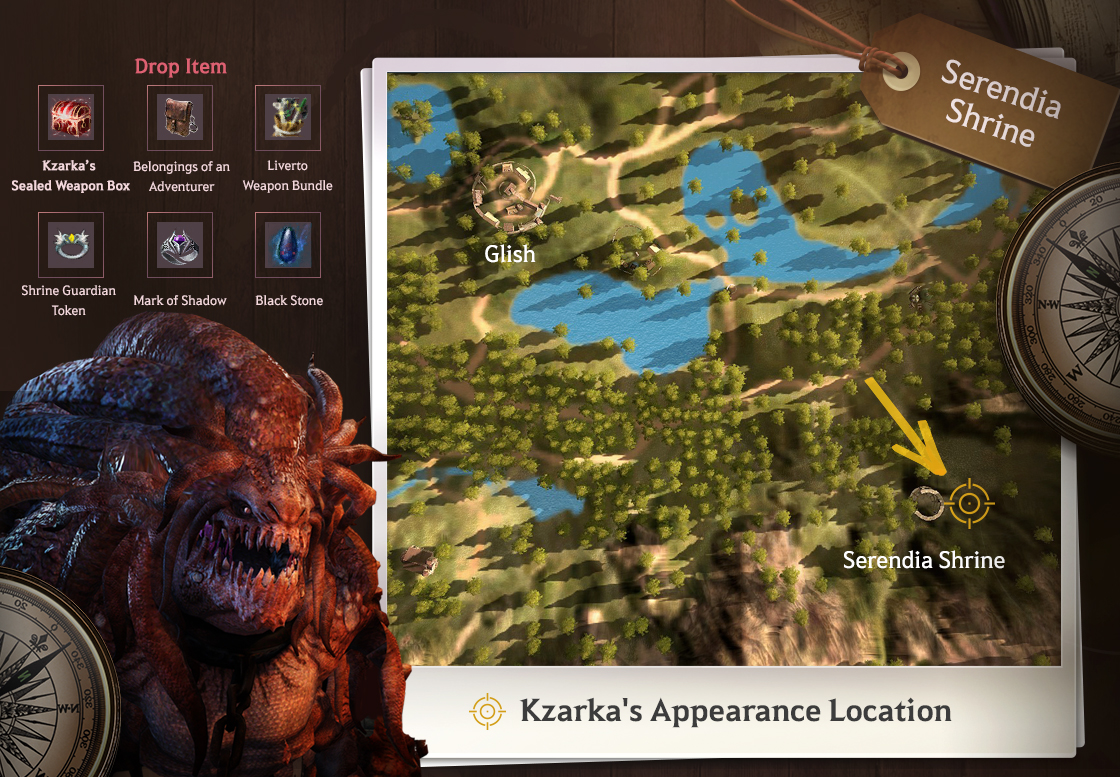 Kzarka appears at Serendia Shrine, below the town of Glish, as shown on the map!

Since Kzarka appears deep within the depths of Serendia Shrine, make sure to leave your horse outside, so you can defeat the World Boss without having to worry about your horse’s safety.

Now for what you’re probably wondering about the most. The rewards!

Before we dive in, you should be aware that the more you contribute towards defeating Kzarka (the more you hit him!), the more likely you’ll get better rewards, so don’t just hide in the corner!

Newer Adventurers are probably still unfamiliar with the terms, but have you ever seen a weapon with Kzarka in its name on the Central Market or talked about by other Adventurers?

This is a main weapon that is infused with the power of the Lord of Corruption, Kzarka!

If you ever obtain the Kzarka Weapon Box, make sure to open the box with the right character to get the appropriate weapon for the class you want to play!

These are fragments of Kzarka’s power. If you bring 100 of them to the Node Manager of Serendia Shrine, you can exchange them for a Kzarka Weapon Box.

A precious bag left behind by an adventurer who perished while defying Kzarka...

A weapon crafted by Liverto, a skilled blacksmith and once infamous mercenary captain in Serendia. Although this weapon by Liverto has seen many years, it is still in excellent shape.

Make sure to open the weapon bundle on the appropriate character to get the right weapon for your class!

By defeating Kzarka, you can obtain the Mark of Shadow, a ring that bears the insignia of the Shadow Knights. Surely this item will help new Adventurers explore the wider world of Black Desert?

Also, you should know that you need another Mark of Shadow to enhance this item!

And like the Mark of Shadow, you need another Shrine Guardian Token to enhance it!

Black Stones are one of the must-have items for adventuring in the Black Desert world that you use to enhance your weapons and armor!

Although Adventurers who are playing on the season servers with Tuvala gear don’t quite need them yet, there’ll be a day when they outgrow their Tuvala gear after the end of the season, so it’s a good idea to stock up on this must-have item. 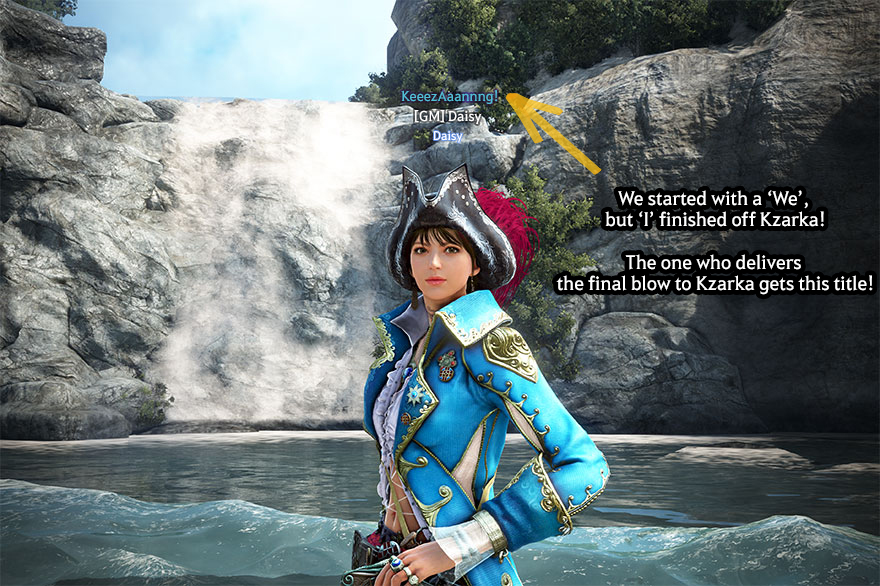 Here’s a look at the special title, KeeezAaannng!

The title’s description says, “We started with a 'We,' but 'I' finished off Kzarka! KeeezAaannng!” So, you might be wondering, just how do you get this title?

You obtain it being the one to deliver the final blow to defeat Kzarka!

Holding this title is something that truly signifies your bravery, so make sure to keep hitting Kzarka until the end!

So, when does Kzarka appear? 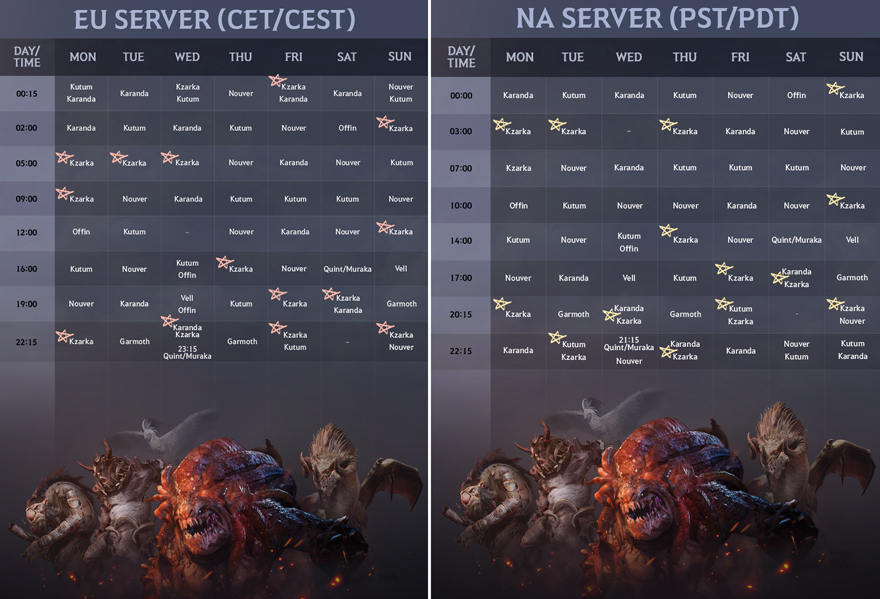 This is a form of Kzarka that is a culmination of the resentment rooted in being bereft of his soul by Illezra, the witch who unleashed the Three Days of Darkness upon Mediah!

Consuming a countless number of Adventurers who dared to stand in the way of his resurrection, his rage grows until it reaches its peak and erupts, bringing forth his more powerful “Nightmarish Kzarka” form. The appearance of this form shrouds the entirety of Serendia in a greater darkness, rousing the Lord of Serendia into calling for powerful Adventurers to vanquish it.

If you’re someone that’s scared of just the plain-old “haven’t burst into a nightmarish fit of rage yet” Kzarka! Please be careful whenever you encounter Kzarka. For no one knows when Kzarka’s rage will reach its peak!

On the other hand, if you’re someone that has no fear, defeating Nightmarish Kzarka will grant you more valuable loot braving such a powerful foe. You can obtain up to a TET (IV) Kzarka Main Weapon, and you’ll also have an increased chance of getting the Belongings of an Adventurer, Gold Bar (up to 1KG), or a type of Magical Black Stone.

We’ve pretty much covered all of the basics about the first World Boss in Black Desert, Kzarka.

If you have any questions left or you’re just a new Adventurer looking for some reassurance in defeating Kzarka for the first time, how about joining our reliable GMs?

At the times listed above on the Season1_Novice Only server, gather in front of the Serendia Shrine Node Manager to meet the GMs and try defeating Kzarka together!

That wraps everything up for Part 1! Stay tuned for Part 2 with Daisy!

View list
10
6
RedOkami
Noice!! please bring more lore like this... I love it!
2
taolurker
I like that Pearl Abyss is doing things like this, although I was hoping it was going to be more strategy, combat hints or video/animated gifs showing the Boss off, along with this. Also was hoping for more on the new Kzarka instance scrolls, but still
happy to see things like this. Good job PA!
1
Anath
I love this so much, it's a great show case ^_^
Would love to see the other bosses if possible <3
0
Shauri026
Hmmm,.. I always took Kzarka to be female. This means Karanda is the only female World Boss in BDO :(
1
Starseared
@Shauri026 Garmoth is female
0
MACDEFIANCE
@Shauri026 nope lol Garmoth is female also :)
0
MACDEFIANCE
@Starseared Oh lol didn't see u said that too XD
0
MACDEFIANCE
Awesome :D <3
0
Kiriishima
and no one ever got a TET kzarka box out of the nightmarish box :D
0
PSV
So what's the tactics for Nightmarish Kzarka?
Cancel Submit
Cancel Submit
1
View list