It’s time to level up your mounts and Training!

We all know there’s no better feeling than traveling the world of Black Desert with your magnificent mount. So, take this chance to get one step closer to Mythical Arduanatt!

● Find the GMs! Where are the GMs hiding? event has started.

The GMs thought a special hide-and-seek could be fun! So, they’ve prepared a couple of screenshots as clues for our Adventurers to solve!

It’s up to you to find out where the GMs were and take screenshots of those spots!

[Find the GMs! Where are the GMs hiding?]

● Added the following text to the Elvia Spirit buff you can obtain from the Elvia Realm:
- The duration of this effect will decrease even after disconnecting.

● Take Down (I to Absolute, Prime) - Changed the skill descriptions as shown below.

● Suicide Fall (I to Absolute) - Changed the skill descriptions as shown below.

● Changed to display "Unknown Adventurer" above the character's head when the camouflage effect is applied from the Treant Camouflage and Desert Camouflage outfits. 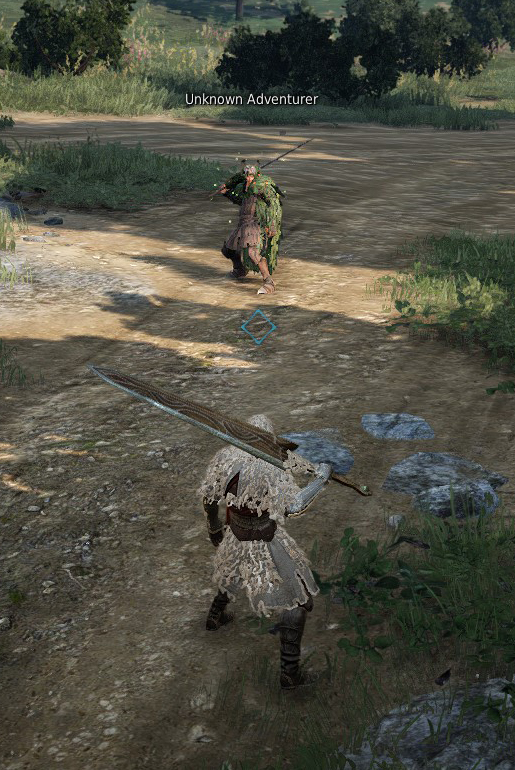 - You can exchange each part of your Desert Camouflage outfit for the following number of Cron Stones:

● Changed the tabs and the order of the tabs displayed when using the Beauty Album/Photo Gallery.

● Lowered the difficulty of the quest "Task 2: [Crossroad] Indiscriminate Attack - Combat" from Kalicha in O'dyllita as follows:

Many of Black Desert's Adventurers have sent us their opinions on wishing to proceed with the Old Moon Subjugation Request quests in monster zones of their preference. Accordingly, we added the quests so you can do them in monster zones of your preference. Also, we have prepared quests for those of you who especially enjoy Atoraxxion, so you can do the quests to defeat Atoraxxion's Ancient Weapons with your party members during the Atoraxxion main questline.
● Fixed the issue where you couldn't use the Honorable Adventurer's Certificate to accept the quest "[Season Server Graduation] Into the Big Wide World" if you had already converted your season character to a normal character and previously forfeited the quest as a normal character.
- In the case of the aforementioned character, you can proceed with the quest, "[Season Server Graduation] Into the Big Wide World" after completing "[Season Server Graduation] At the Crossroad" by receiving guidance from the NPC Leila at the Velia Workshop via "I wish to proceed with the [Season Server Graduation] Completion quest" when talking to Fughar.
- You can complete the quest by talking to Fughar in this case, since you have already used the Honorable Adventurer's Certificate.
● Changed the main quest "[Atoraxxion][Co-op] Recovered Vow" so you can now solve the thread in Atoraxxion - Vahmalkea by yourself.
- Interact with the Exchange located within Vaha's Heart to consume 10 Energy for some supplies while proceeding with this quest. These supplies will let you solve the thread all by yourself.
- To solve the thread by yourself, you will need 4 of these supplies.
- We've also deleted "[Co-op]" from this quest's name. 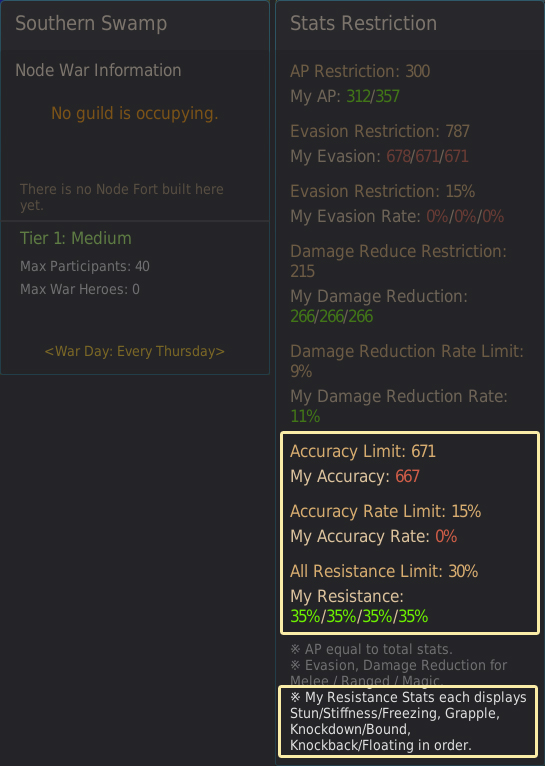 ● Added limits to Max Accuracy and Accuracy Rate for Conquest Wars in Mediah and Valencia Territories. 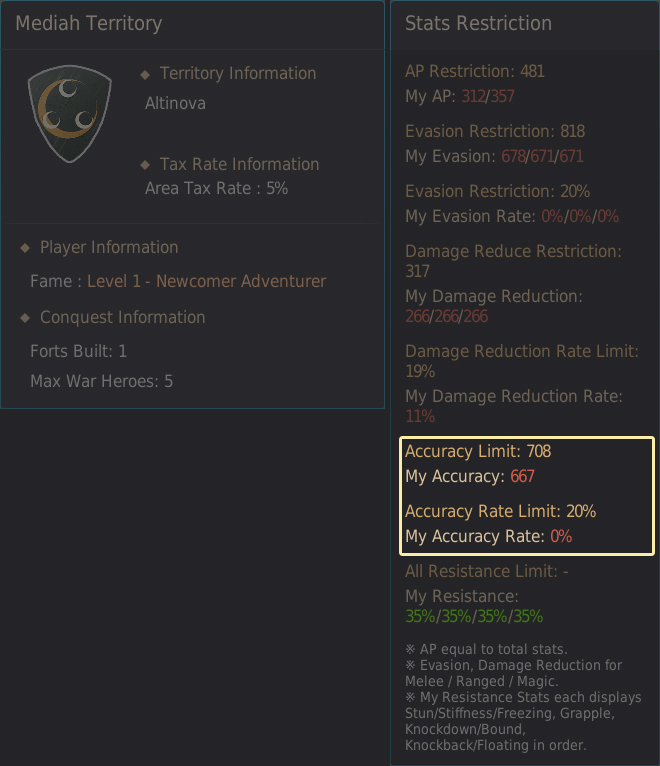 ● Increased the max durability of the inner and outer gates of Calpheon/Mediah/Valencia for Conquest Wars.
● Changed the appearance of Flimsy Barricades/Wooden Fences to differ from normal Barricades/Wooden Fences for Node/Conquest Wars.
● Changed the number of Flame Towers and Elephant Nurseries you can install on the item description of [Guild] Sturdy Square Fort (Tier 4) to match the actual number of the aforementioned items you can install.

● Changed the locations of some NPCs and sailors in the Lunar Halo Inn in Velia.

● Added the "Close UI When Hit" setting. Disable this setting to keep the following full screen UIs open even if your character is attacked. 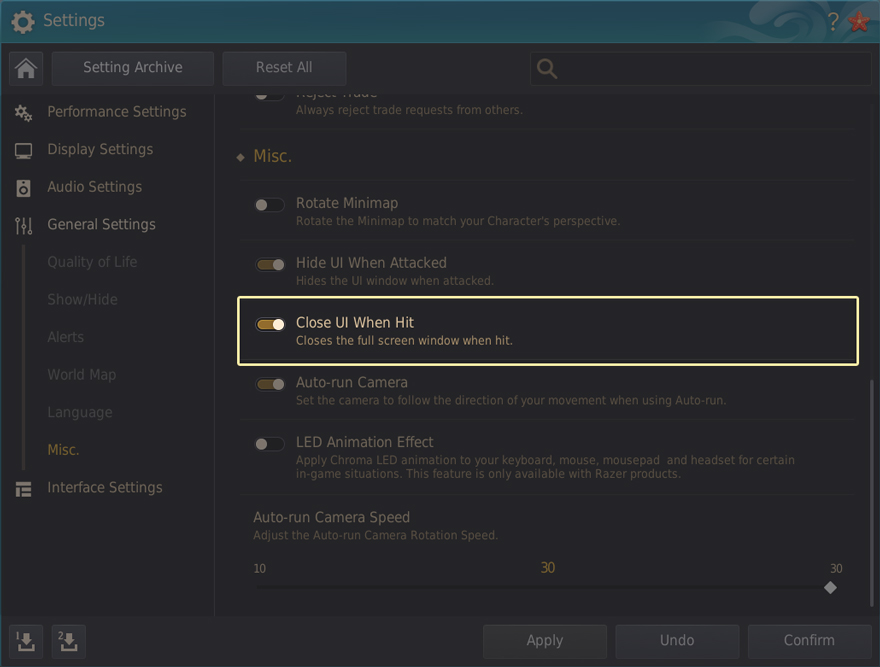 ● Added a Sort function to the list of Alliance members.
- When you select each title on the list of Alliance members, the categories will be sorted.
● Changed the spacing in Fughar's Letter of Encouragement for an easier read.
● Added the key guide to be displayed when selecting a placement in Place Mode.
● Added a feature that allows you to turn the durability display on/off for furniture with buff effects in your residence.

● Changed the scroll to move to the bottom of the list so that you can see your recent history when a new history is added to the Edit History UI in the Beauty (F4) window.
● Changed the Fugitive icon to no longer hide your character's name when equipping the Treant/Desert Camouflage Outfit Set.
● Added a category where you can check the list of items in the registration queue on the Central Market.
- The category is "In Registration Queue," and on the category list, the item price upon registration and the actual time it was registered on the Central Market will be displayed upon request. Also, if you press the following items, it will take you to a screen where you can pre-order items.
- The items displayed in the category are either items worth 20 billion Silver OR specific items listed below. These items have a 15-minute cooldown upon registration before you can purchase them. 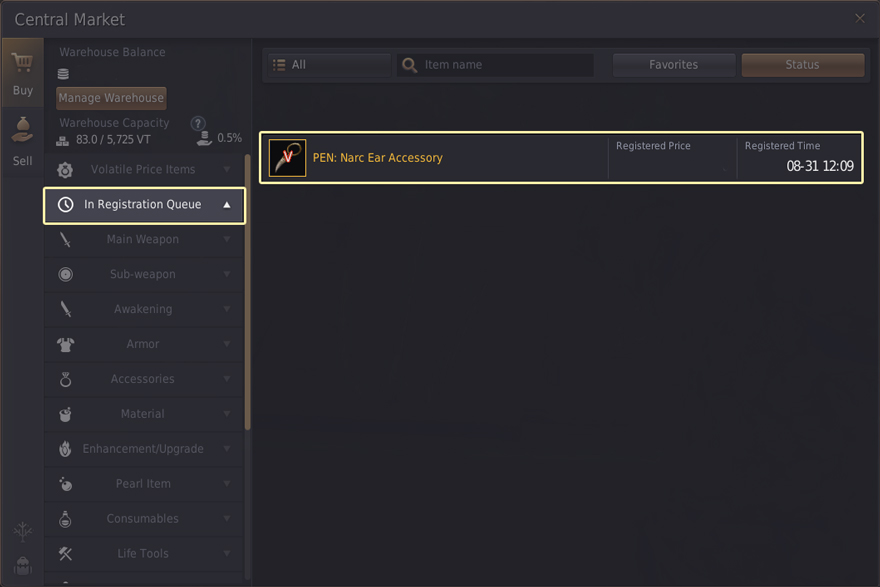 ● Made improvements to better deal with forged/fake game access.
● Added an AMD FSR function you can apply when playing Black Desert.
- The FidelityFx Super Resolution(FSR) function is an upscaling technology that delivers high frame rates and quality details while maintaining high-resolution graphics.
- You can enjoy adventures in the world of Black Desert in a smoother and more pleasant environment, depending on the settings.
* The AMD FSR function includes a feature that displays high-end graphics. For Adventurers who have set the Sharpening function from the Graphics Card settings, please keep this in mind. (Added)
* To enable the AMD FSR function, you have to enable High-End Graphics - Remastered Mode, Anti-aliasing TAA, and Upscale settings. Performance may vary according to computer specifications.
● Changed to apply the AMD FidelityFx Super Resolution(FSR) function to the Upscale function.
- You can set this function by going to the ESC menu > Settings > Display Settings > Quality > Upscale OR Settings > Performance Settings > Optimization > Upscale menu.
(However, you can adjust the detailed options of the AMD FSR function by going to Display Settings > Graphic Quality > Upscale.) 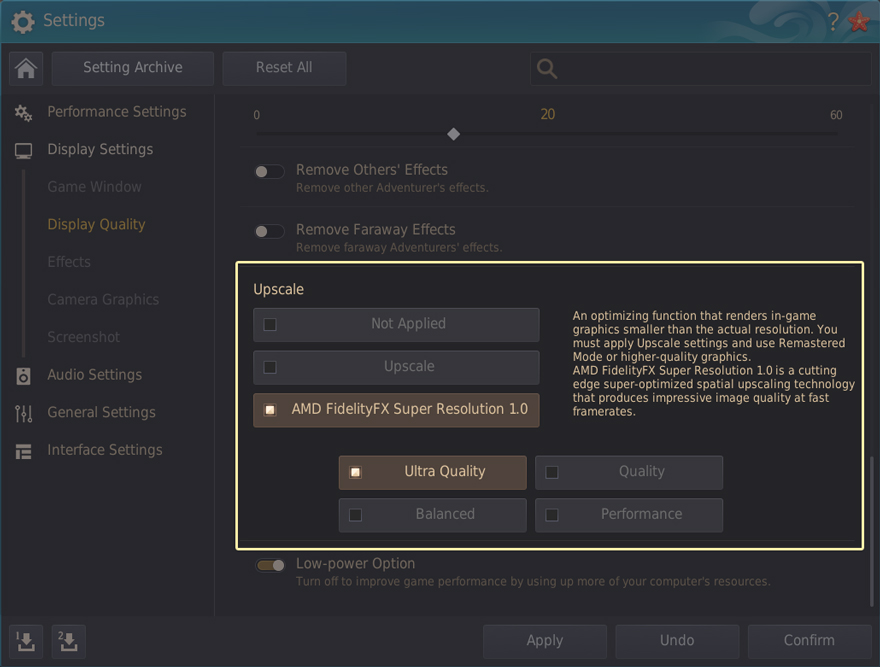 ● Added a feature that allows you to check the copyright information of AMD(Advanced Micro Devices) FSR from the following menus:
- ESC(New) menu > Information(F1) > Copyright(8) menu (Copyright Information)
- ESC(New) menu > Settings(F10) > Settings(1) menu (Copyright)
* The function works not only for graphic hardware of AMD but also for other graphic hardware. You can check the types of graphic hardware you can use via "Supported Graphic Hardware."
* It is recommended that you use the most up-to-date version of your graphics driver when using the AMD FSR function. You do not need to install an additional software.

We have implemented an AMD FSR(AMD FidelityFX Super Resolution) to Black Desert. FSR is AMD's cutting-edge upscaling technology that improves framerates, provides better quality details, and maintains high resolution without hardware upgrades. Through this added function, we hope to spread the beauty of the Black Desert world to even more Adventurers. Also, we will continue our technological research and development to provide a higher quality gameplay environment for our Adventurers.

● Adjusted the size of the game client listed in the Download page.
● Improved the layout area for comments posted under the latest news.
● Improved the adventurer's profile page to now display the number of comments per posts.
● Added a function on My Page that allows you to change your email address that you input intially when accessing the game as a Steam user.
● Improved the layout of the Parental Controls website.
● Improved the Parental Controls website to have language options for English or Korean.
● Improved the rules for deciding upon thumbnails to be posted on the gallery-style forums.
● Changed the Free Trial and Twitch Drop coupons to be usable even after failing at more attempts than the number of coupon code errors allowed.
● Added TikTok to the share link to SNS function.

● Changed requirements for Adventurers under 18 so that they must now have a legal representative's (parent, guardian, etc.) consent when signing up for membership, playing games, and using paid services under the Children's Code announced by the UK's Information Commissioner's Office (ICO).
* You can find information on receiving a legal guardian's consent for users under 18 from the following notice.
[Go to [United Kingdom and British Territories] Regarding Parental/Guardian Consent for Users Under the Age of 18 ].