[GM] Daisy is back with the sixth installment about the World Bosses! Today’s World Boss is the Crimson Dragon Garmoth! That’s right, the very dragon that drops the powerful Garmoth's Heart! Whether you’re a new Adventurer who has no idea what World Bosses are, or a returning Adventurer trying to remember where Garmoth spawns, everyone is welcome!

A follower of the Black Dragon Markthanan, Garmoth first flew into the world of Black Desert on November 14, 2018.

What’s the story behind Garmoth? 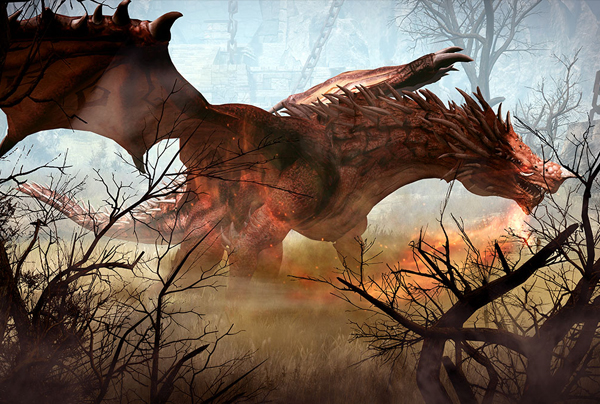 The Black Dragon Markthanan is said to have triggered the great war between the dragons and the Sherekhan, which left the entirety of Drieghan in ashes. In this war, Markthanan led the dragons of Drieghan against humankind. Although most of the records about the great war were lost, the survivors still remember the black dragon all too well — for Markthanan was the very embodiment of a cruel dragon. Markthanan supposedly gave the other dragons fragments of crimson stones from his own body, granting the dragons power and putting them under his rule.

Now you might ask, just who were the Sherekhans that fought against the Black Dragon Markthanan and his followers?

The Crimson Dragon Garmoth is one of the dragons that served the Black Dragon Markthanan in the great war against the Sherekhan. During the great war, Garmoth was grievously wounded by the Sherekhan and forced to flee. She took refuge in a place now known as the Blood Wolf Settlement, where she recovered her strength thanks to the wolves there. Having recovered, Garmoth reappeared in the skies of Drieghan, bringing terror to the people of Drieghan once more.

Garmoth has a variety of offensive aerial skills at her disposaland she can summon the Kagtum that worship her and launch large AoE attacks.

Where does Garmoth Appear? What rewards do you get for defeating Garmoth? 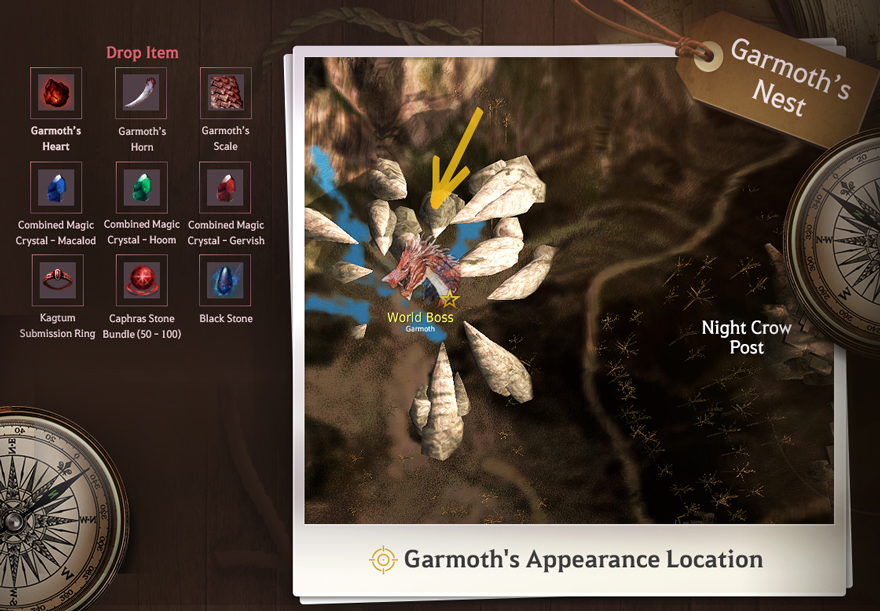 The Crimson Dragon Garmoth appears at her nest near the Night Crow Post in Drieghan, where the great battle between the dragons and Sherekhan took place. (There’s speculation that Garmoth’s nest was built by the Blood Wolves...)

Remember that you have a higher chance at better rewards the more you contribute to Garmoth's defeat, so keep your chin up and fight with courage!

It isn’t actually a heart, but rather a crystal instilled with the concentrated fiery magical powers of Garmoth. The influence of Black Stones has made it bear a dark and murky hue.

The Inverted Heart of Garmoth can be used to reform and upgrade Sub-weapons or Awakening Weapons. 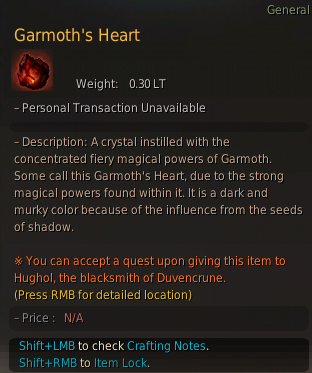 A horn of the Crimson Dragon Garmoth that broke off during a fierce battle. Bring this horn to Gerson in Duvencrune to receive a “Young Crimson Dragon.”

Garmoth’s Scales can be used to craft HAN magic crystals.

A Black Stone Crystal that can be fused into any gear socket. The set effect depends on the number of Macalod crystals transfused to your gear.

* The 2 crystal and 4 crystal set effects are applied separately, and only once each.

A ring that signifies the total obedience of the Kagtum tribe to Garmoth. It contains Garmoth’s magic and grants an Extra AP Against Monsters +1 effect.

Open this item to obtain between 50 – 100 Caphras Stones.

Defense gear worn by Akum during the Great Battle against Markthanan, the Black Dragon. Although old and crude, the spirits of the great Sherekhan warriors reside within it.

So, when does Garmoth appear? 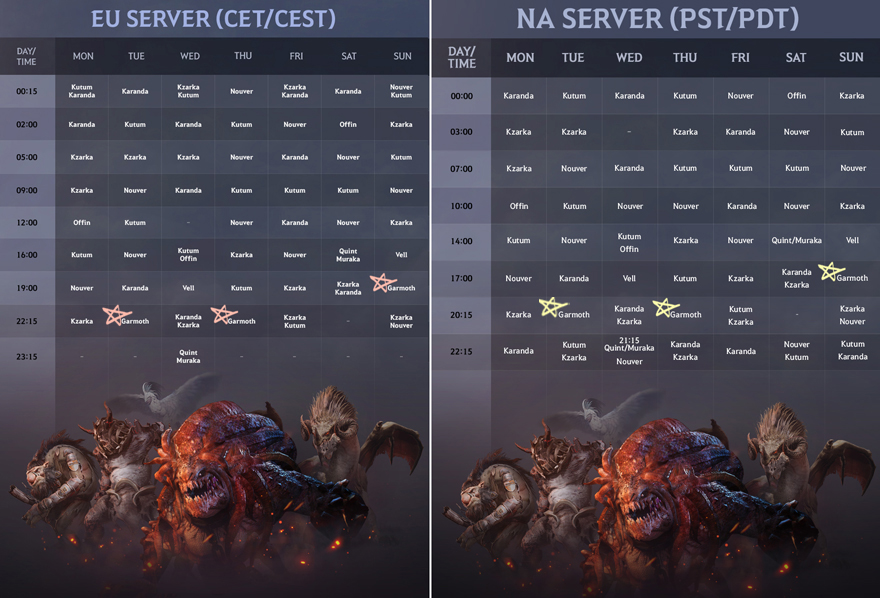 A new record about the ancient kingdom of Orzeca was discovered in O'dyllita's Crypt of Resting Thoughts, causing Queen Viorencia Odore to announce that she would grant the Resplendent Moonlight Chest to whoever helps decipher the Orzeca's Records: Time of Dragons. Rumors say that people have seen this Resplendent Moonlight Chest illuminate a radiant light, a kind of light only seen in that of a dragon's heart...

Now, let’s find out how you can obtain the Resplendent Moonlight Chest.

2. Accept the quest "Orzeca's Records: Time of Dragons" from Black Eyeroot in the Crypt of Resting Thoughts.

3. Complete all 14 missions after completing the quest "Orzeca's Records: Time of Dragons" to be blessed by Queen Viorencia. (However, this will not be an easy challenge as it is a questline that rewards Garmoth’s Heart...)

That covers pretty much everything about Garmoth. Now, it is time for you to go out and face the Crimson Dragon yourself!

Worried about taking on Garmoth? Scared to brave it alone? Join the GMs at the following times:

Come to the Garmoth's Nest node on the Season1_Novice Only server at the times listed above to meet the GMs! They’ll show you the way to Garmoth and give strategies on taking down the Crimson Dragon! See you there!

That wraps everything up for Garmoth! I'll be back with Part VII, so please stay tuned!

View list
33
4
Quelnar
You might want to fix the copy-pasta here with "the more you contribute to Offin’s defeat."