● Crack! It's the Source of Lightning! event has started.

Red lightning will come crackling down during the event period!

*Shudder*… How scary.. ༼◉_◉ ༽ But, did you know? The lightning gives you a buff!

When red lightning strikes, it will leave an electric current on the ground for a short period.

Move close to the current to receive the buff:

Let's make good use of the Source of Lightning to defeat monsters even more efficiently! •'-'•)و✧

[Crack! It's the Source of Lightning!]

● An Autumn breeze rolls in the September Challenges! event has started.

The summer heat is cooling down as the autumn breeze starts to roll in! ( ･ิᴥ･ิ)/

[An Autumn breeze rolls in the September Challenges!]

● Fixed the issue where the character did not naturally transition when using Emergency Escape, interacting to gather, or other actions suddenly when changing weapons while moving. This fix was applied to the following classes:

● Fixed the issue where the character could not use Emergency Escape, interact to gather, or perform other actions suddenly when sprinting in non-combat stance. This fix was applied to the following classes:

● Fixed the issue where the character could not use Emergency Escape while moving foward in non-combat stance. This fix was applied to the following classes:

● As we informed all of our adventurers in a previous letter, the "2021 Summer Season," which was created to relieve some of the burdens of growth for new adventurers via the season servers, will come to a close during September 15 (Wed) maintenance.
- Please refer to the [End of the 2021 Summer Season] notice for more details.
- Season character creation will be unavailable after the September 8, 2021 (Wed) maintenance.

● Storming Beast - Fixed the issue where the sound effect of the skill would sound different when the skill is used in a combo during another skill.

● Evasion, Evasive Attack, Flowing Water - Improved to turn the character towards the direction of the camera.
● Forward Evasion - Changed the skill to activate by pressing ↑ + Shift (continuous Shift).

● Meteor Shower (I to III, Absolute), Prime: Meteor Shower: Areal/Focus - Changed the skills to activate automatically after a set amount of time when used on a mount.

● Aad Sphera Training - Fixed the issue where the skill would not activate when RMB is pressed in certain situations.

● Chase - Fixed the issue where the skill Carver would activate first when pressing the commands (Shift + LMB + RMB) during the skill.

● Prime: Ocean's Allure - Changed the last slash motion of the skill to appear more natural.
● Labao on Deck! - Changed the Damage Reduction Rate effect applied to Corsair when she is in danger when Labao appears to the following:
- The effect that was applied with the Bodily Rejection effect was changed to the First Into The Fray! effect, changing the duration to 10 min.
* Therefore, the effect of the skill Labao on Deck! was changed to be now stackable with the effects from the skills Protected Area and Elion's Blessing.
● Labao on Deck! - Improved the effects of the skill when Labao appears to apply more quickly.
● Fixed the issue where the scallywags summoned from the following skills could not deal damage to annexes in Node/Conquest Wars other than the Flame Tower and Hwacha.
- Actin' Cap'n, Scallywag Trio, and Cannoneer Duo summoned with the skill Code of the Scallywags.
● Fixed the issue where the additional damage from the Cannoneer Duo were not applied to annexes in Node/Conquest Wars.
● Improved the Actin' Cap'n and Scallywag Trio to be able to call up to 5 scallyways.

● Fixed an issue where the Krogdalo's Horse Gear - Earth 5-Set effect Evasion +3 was being displayed as Evasion Rate.
● Added the information that only the following classes can get an outfit from the [Event] Marine Romance Outfit Box in the item description.

● Changed the box at Northern Heidel Quarry to drop Silver and various items when broken.

● Added a function that allows you to repair durability of your cooking utensils and alchemy tools. You can repair the following tools: 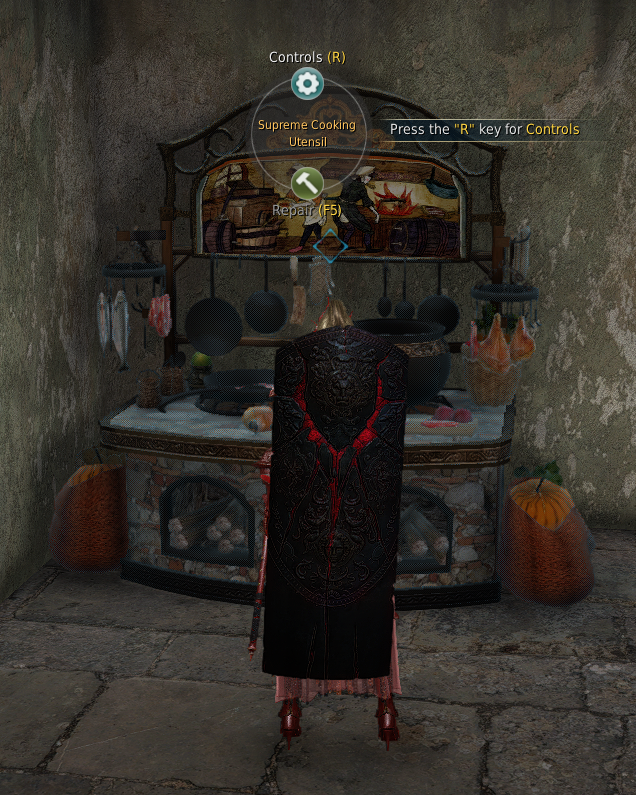 ● Added four types of repair tools appropriate for each installment that you can set up within your residence.
- You can hand over one cooking utensil or alchemy tool with max durability to an NPC in a major city or in Velia to exchange it for one repair tool appropriate for each installment.
* These items can be stacked. They can be placed into Storage and moved by Maids/Butlers. 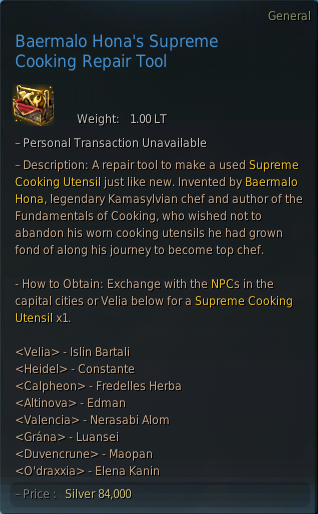 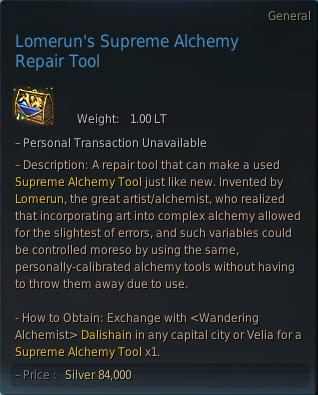 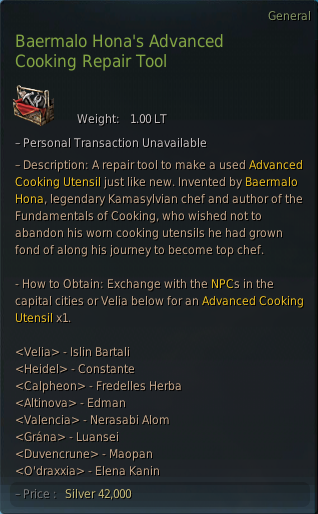 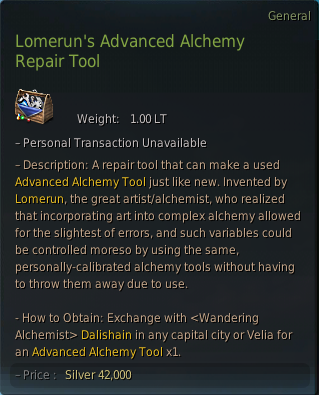 Previously, the residence was crowded with a variety of cooking utensils and alchemy tools, but with the addition of the ability to repair cooking utensil/alchemy tools, you can now install just one tool rather than setting up multiple tools. We hope this opens up options for Adventurers who enjoy cooking/alchemy and decorating their residences. The weight of the repair tool in the Black Desert Global Lab used to be 10LT, but it was changed to 1LT because Barmalo Hona and Lomerun only put in the essential tools to repair. The repair items stacks and can be moved to storage using maids, just like it does in Global Labs, so we hope you find it useful.
● Added a filter on the Barter Information that distinguishes trade information by level.
- The filter that distinguishes the trade information by level are as follows:
- By setting the filter to "All Barters," you can filter items in order by level as was the default prior to the update. 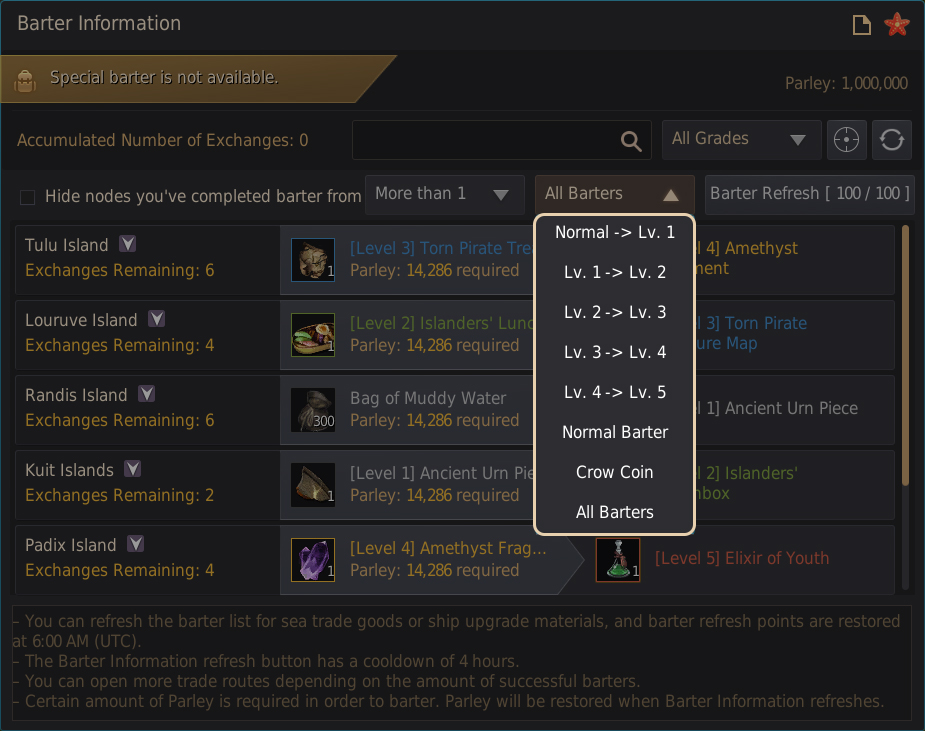 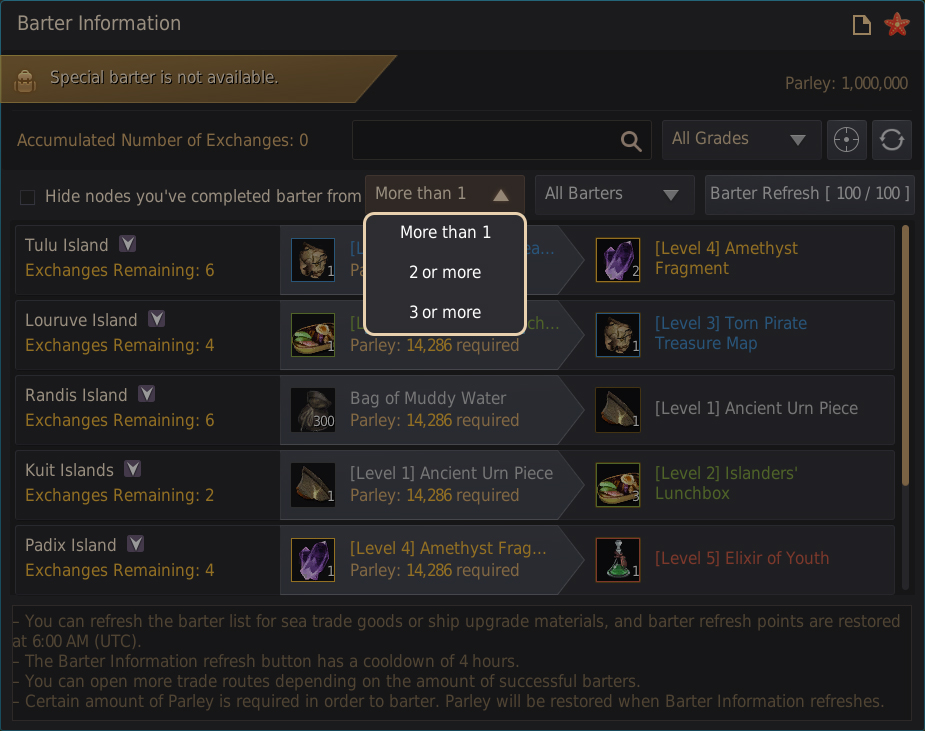 ● Added a function to see items in the Central Market by pressing LMB on the button from the World Map (M) and the Barter Information screen for materials that can be obtained on land and through the Central Market.

It was previously difficult to navigate the Barter Information UI because setting the filter by level displayed both exchangeable items and items that will be exchanged. Some of the items were also sorted by level, giving the impression that the filter had been applied incorrectly. Items will now be properly differentiated by level, and the filter can also be set to arrange items by exchangeable amount. Adventurers will now be able to find items they need or want based on their location, and we believe it will make for a more enjoyable experience at sea as a result of these changes. We're also working on adding more quality-of-life improvements, which we hope you'll look forward to.
● Changed the Composition/Score screen to enable the use of Ctrl + C (Copy) and Ctrl + V (Paste) and not have the mouse cursor disappear when the CTRL key is pressed while the Composition Note is open.
● Added different alerts in the 1:1 chat with friends.
- You can use this feature to set individual messenger alerts for each friend in your friend list.
● Changed to no longer display guild recruit announcements if the guild recruit notice hasn't been updated in 3 months.
● Improved resurrecting in the Red Battlefield to automatically resurrect the character in the resurrection area of the Red Battlefield if they try to exit the battlefield while the character is dead.
● Added a new entrance screen when entering the Last Stronghold, Atoraxxion, from the Ancient Stone Chamber, where you can choose which stronghold to enter.
- Please note that you can only enter Vahmalkea at the moment. 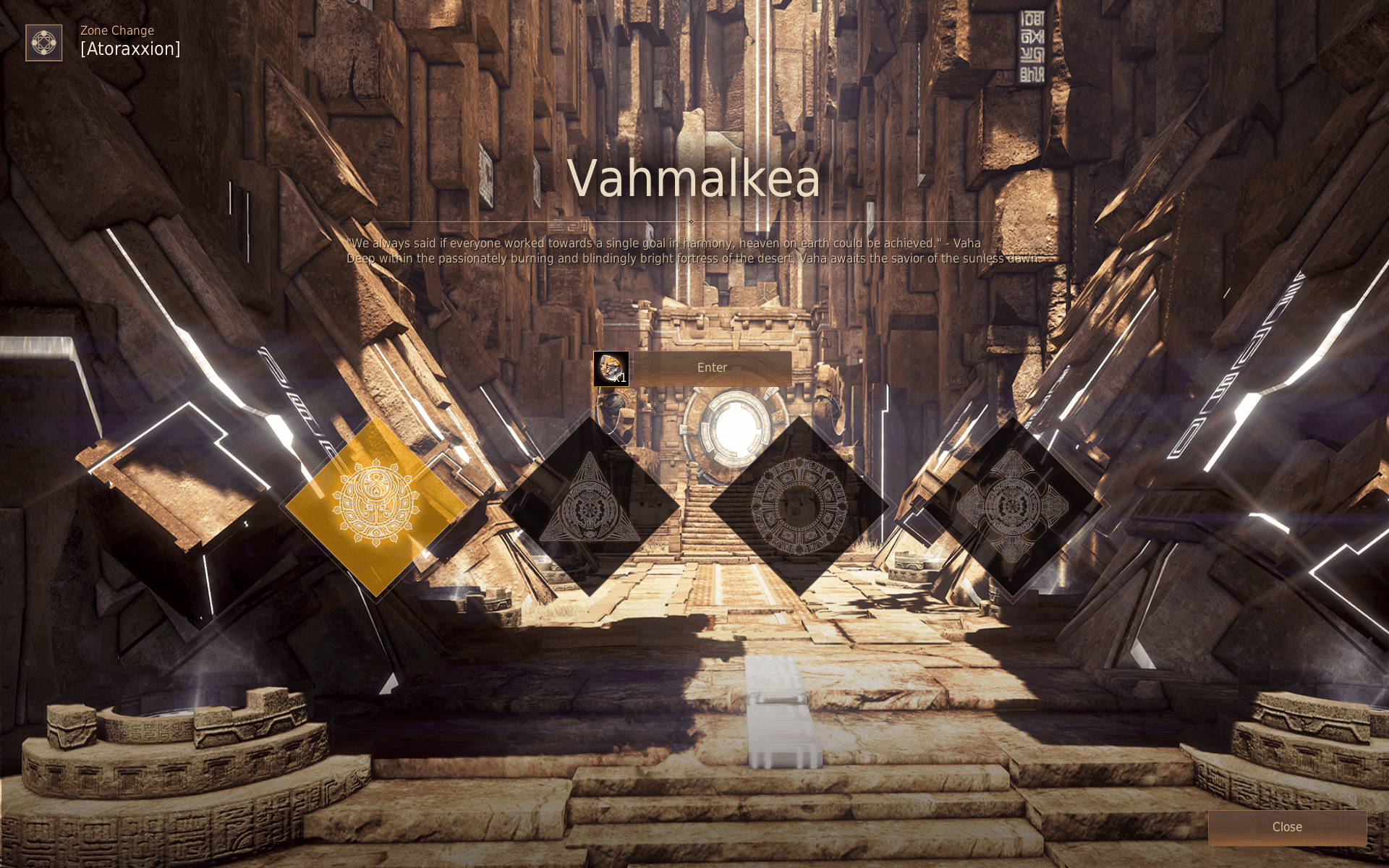 ● Karashu, the alchemist in Sand Grain Bazaar, buried an alchemy device somewhere deep in Hystria Ruins. When the Ancient Teleporter connects to the Hystria Ruins, the light that seeps out from the alchemy device will reveal where it is connected.
- It is said that Adventurers who help Karashu can see the light that it emits from the ancient teleporter.
- Go to Quest (O) - Preferred Quest Type - Combat in order to accept this quest.

The teleporter found in the desert frequently led players to undesirable monster zones, because it was difficult to predict where it would take them. In this update, we've added an effect to the teleporter device that leads to Hystria Ruins. The teleporter devices can be distinguished by competing a simple quest, so we hope you like this change.
● Improved Illezra's movement to appear more natural when she appears behind Tranan Underfoe during the quest "Hammer that Wakes the Morning of Velia."
● Improved the camera effect to appear naturally when talking with Maudi Budar.
● Changed the "Hakuna M'Otters" knowledge keyword to match the actual method of acquiring the knowledge.
● Changed the names of the [Daily] Old Moon Guild Subjugation Request quests that you can accept from the Old Moon Guild Manager Jetina.

● Revamped "liberation" for territory Conquest Wars into a point rank system.
- In the event there is no victorious guild/alliances, rankings will be determined based on the remaining durability of Command Post/Field HQ and annexes from each of the guilds if there are two or more guilds/alliances remaining at the end of the Conquest War.
- The highest ranking guild/alliance will win and become the lords of the territory.
- From the remaining guilds/alliances when the Conquest War ends, the top 5 guilds/guild alliances, excluding the highest-ranking guild/guild alliance, will now receive more rewards for defeats than the previous defeat rewards.
- The points for the rankings are based on the following:

- The rewards for each rank are as follows:
* Rewards will only be available once and the higher rank rewards will be sent. 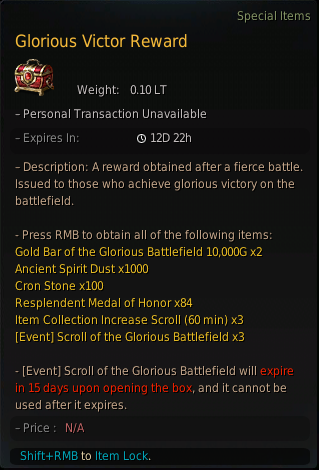 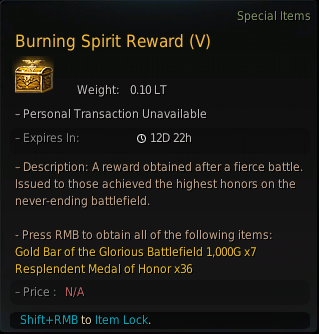 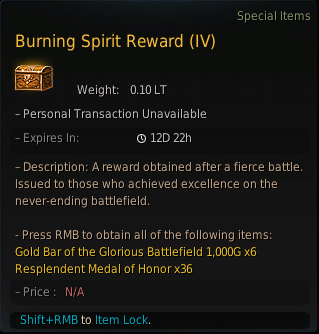 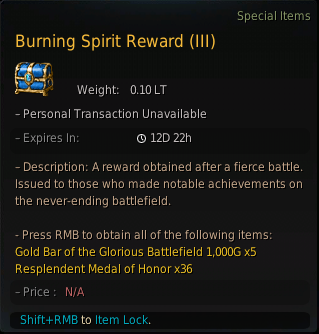 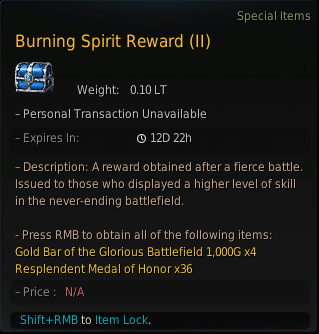 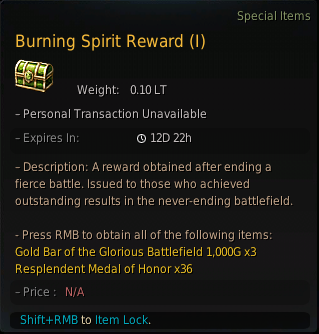 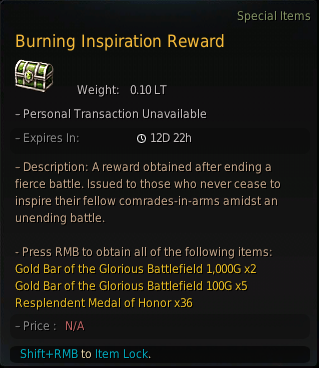 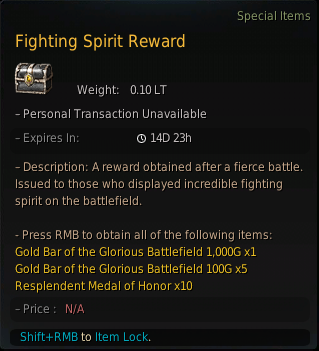 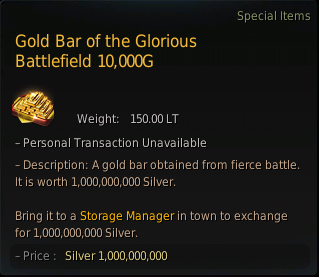 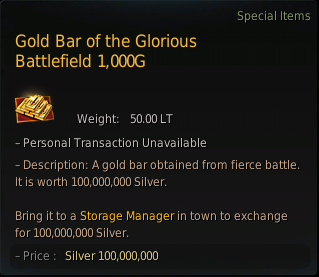 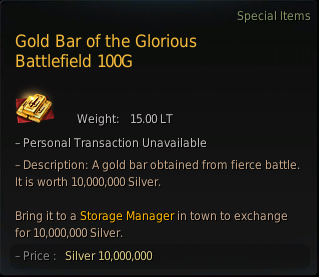 ● The Relief Aid Priest Laderr has appeared at the Abandoned Monastery node. You can purchase various potions and Atanis Fireflies from Laderr.

● Changed the allignment of the Warning UI to display correctly when navigating in the Elvia server under a specific resolution setting.
● Enlarged the scroll buttons on the following UI:

● Improved Skill window (K) by enabling the search function to find the following skills in the "grab" category.

● Improved the Family Inventory to allow items in it to be linked to the chat window.
- To link items, open the chat window (Enter) and press shift + LMB on the item in the Family Inventory.
● Changed the "Steal" interaction with NPCs to show a notification if the character does not have enough energy.
● Changed the scroll to move automatically to the corresponding item if the searched item is available in the Inventory, Storage, or Warehouse.
- You will be notified through a system message if there are no search results.
● Changed Auto-sprint setting button to appear with the Stamina UI.
● Changed the mouse cursor to change its appearance to the input shape when right-clicking on a skill preset slot.
● Changed the following UI to display the amount collected when selling horses at the Horse Market:
- Confirmation message window upon collection.
- System message in the chat window after collectiion.
● Changed the error message to be more apparent when an error occurs in certain situations with items that were registered on the Central Market with the 15-min wait time.