Hey, what are you planning for the Manor update?

Afterward, I’ll look into a Contrabass and Music Stand for the 2nd-floor terrace.

That way, I’ll have a nice little concert spot.

Then I’ll put a table and some chairs nearby.

Gazing at the night sky with the refreshing smell of Acacia as company sounds pretty nice, right?

It sounds like a great way to spend some time. Make sure to invite me!

How do you think Adventurers will be decorating their manor now that the update is out..?

Are you an Adventurer who always wanted to really delve into decorating a home or garden? Maybe you’ve been disappointed at the lack of space or yard?

If so, we’re super excited to finally introduce you to the Blue Maned Lion's Manor! From chandeliers to fireplaces and even fountains, it’s a place where you can really unleash your inner home decorator! 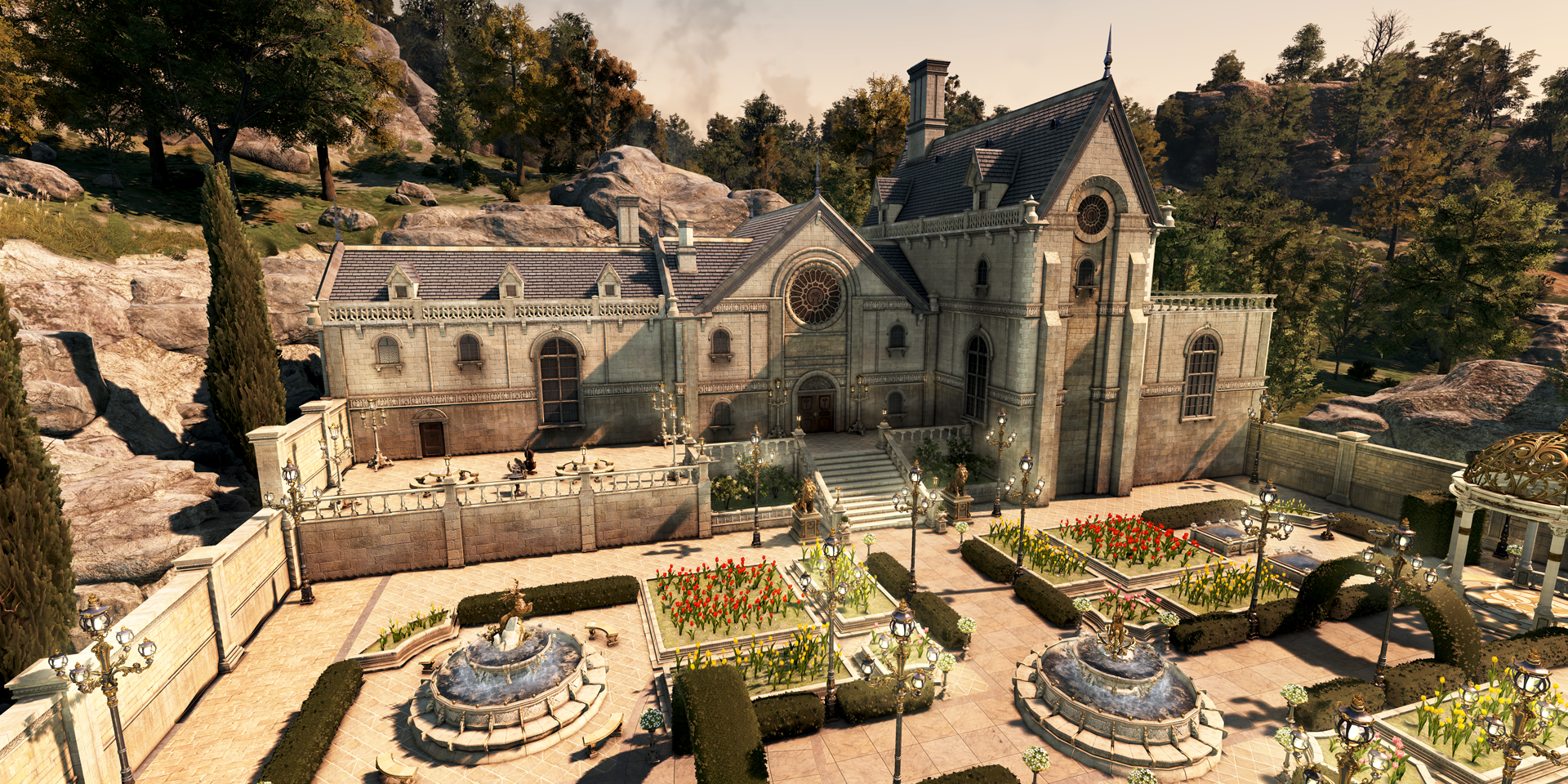 If you follow the Demi River and head a little east, you’ll be able to see the manor in person. 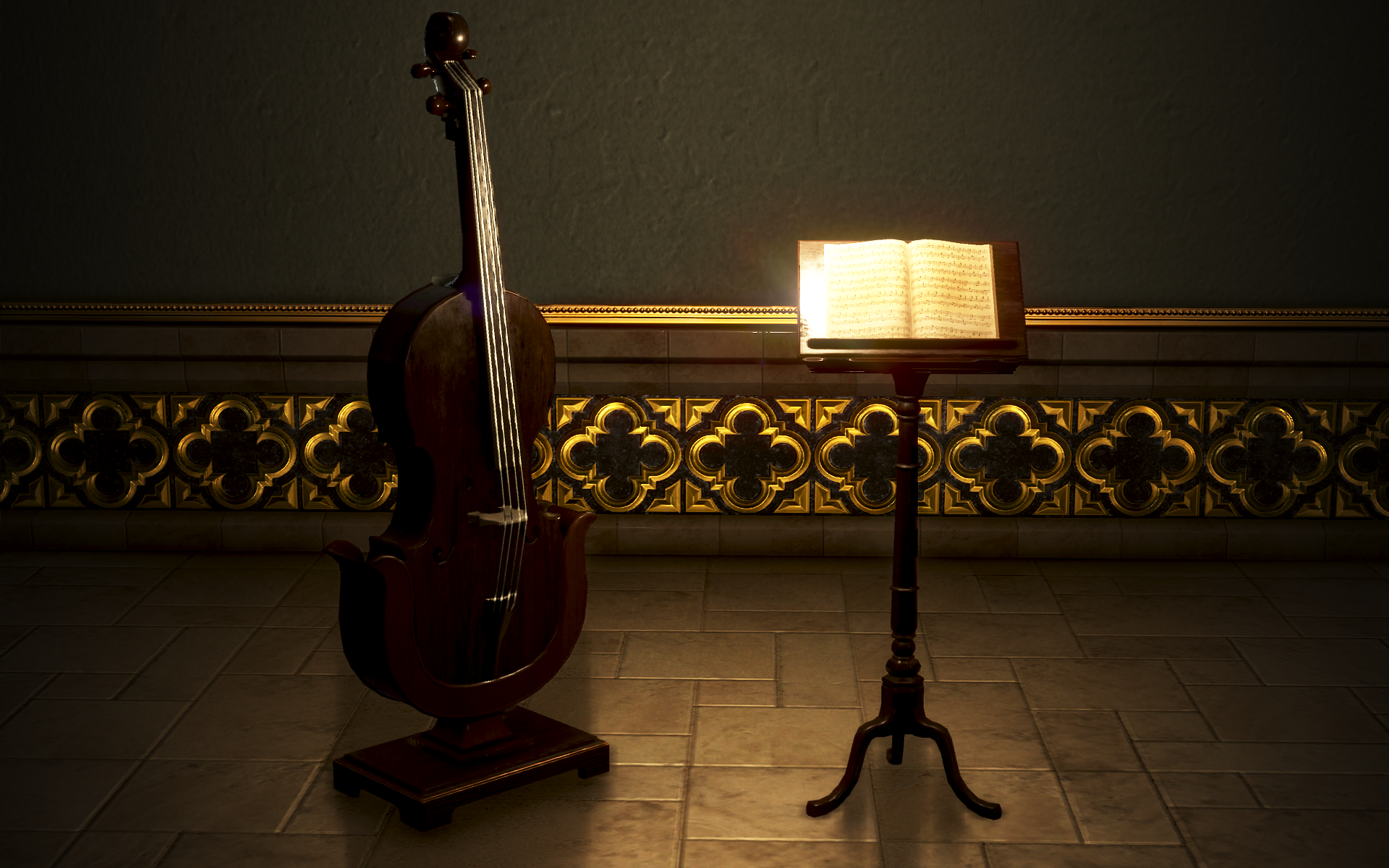 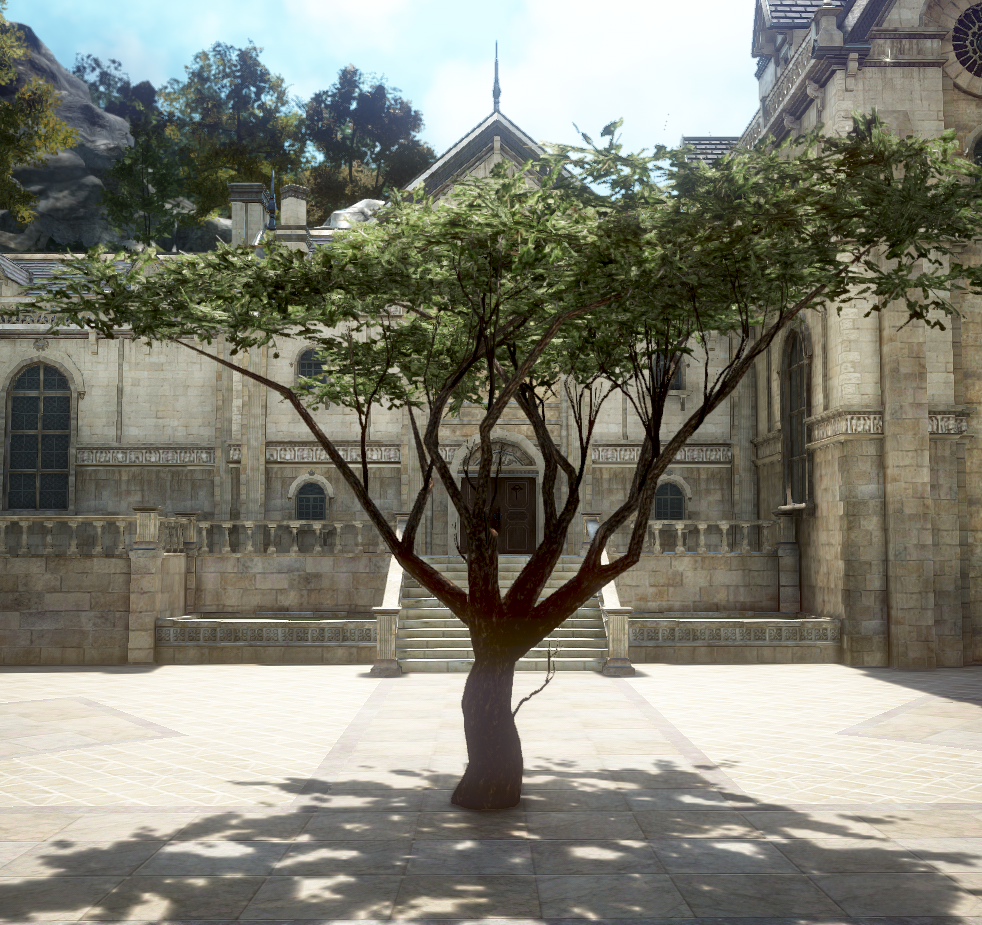 Before you can start decorating, let’s learn more about the Blue Maned Lion's Manor first.

Once you’ve completed the “Looking for Adventurers” or “[Boss] Witch of Horrors” in the main questline, you’ll be able to accept the “[Manor] Crucio Domongatt's Summon” quest from the Black Spirit.

From there, you'll follow another questline that will allow you to rent the Blue Maned Lion’s Manor. The questline itself is quite easy – all you need to do is visit NPCs and find some hidden objects that are nearby, so don’t let a questline scare you away!

After you’ve completed the questline, head to the Blue Maned Lion’s Manor, which is located near the Eastern Border. Once you arrive, just approach the door and you’ll see an option to purchase it for five Contribution Points.

* The Contribution Points will be returned when you release ownership of the manor.

Once you’ve provided the Contribution Points, press “R” to open the door and view the contract below. 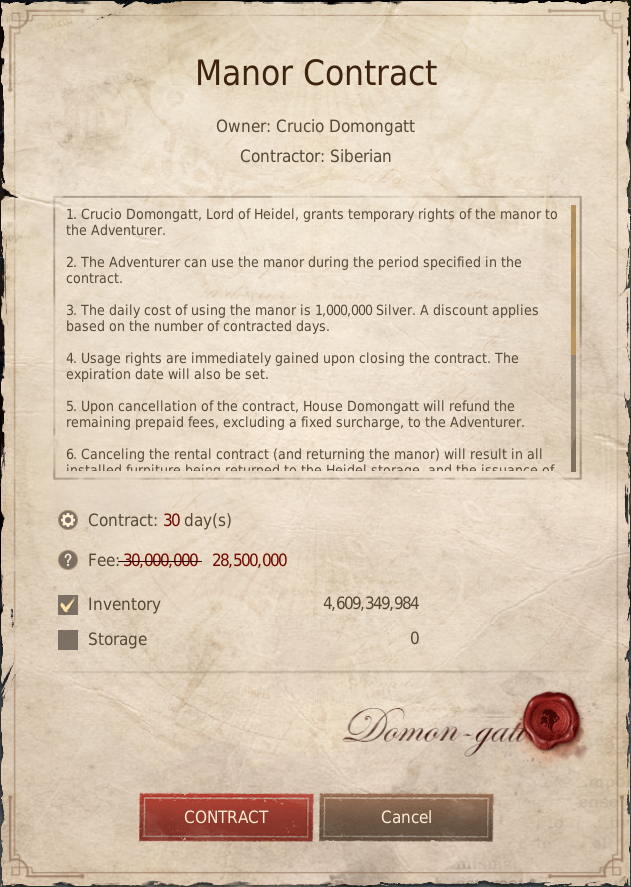 Select the gear-shaped icon to set the contract period from 1 to 365 days. If you sign the contract for a period longer than 30 days, you can get a discount! 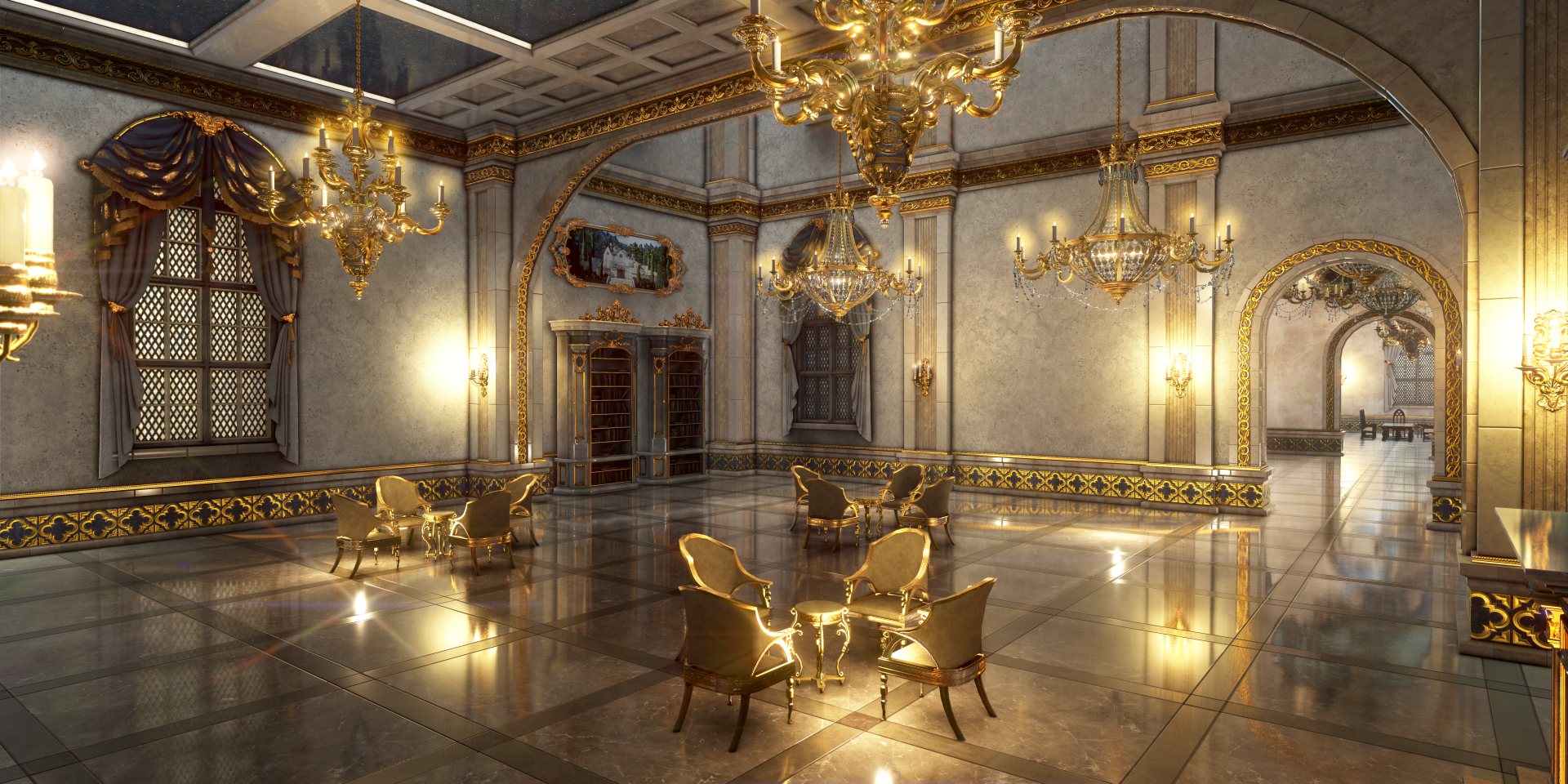 Q. How is the Manor (Blue Maned Lion’s Manor) different from existing residences?

Q. Can I invite my friends to my manor?

A. Of course! Friends, guild members, and party members are free to visit your manor via the “Visit” option. Make sure to invite them to show off your decorating skills!

Q. How do you make furniture that can be installed in the manor?

Manor furniture and exterior items can be obtained in a variety of ways such as through the Furniture Workshop, Processing (Manufacture), and quests. Directions on crafting grand set pieces like the Rearing Golden Horse Fountain and Flondor Pond can be found via [F2] - [Crafting Notes] as well. Later on, the instructions on obtaining manor furniture, sculpture, etc. will be added to the Adventurer’s Guide.

View list
19
Maaroki
Can i put down farms in the garden on the manor?
Skullmonkey
What actual benefits does this manor give me besides having a place to buy and display pearl decorations?

See these are the things that other games like Archeage, Final Fantasy and heck even Skyrim give us with player housing. Some of it is a premium upgrade while others are available through in game means.

This is just empty eye candy with no real benefit but takes away from our contribution and puts a daily tax on our silver.


Smart folks would find a way to give us some of the above functionality I mention above with the benefits of a value pack, book of the old moon or kamasylvia tree so that way it encourages more players to have all three of those items active. That way it's
a win/win for both the players and the company.
LunaRoyal
@Skullmonkey They specifically said that this mansion only exist for players who loved to decorate their in-game homes and have an opportunity to make their wildest home fantasy come to life. Building up a luxurious place that solely exists as a way to
flex your ego and desires. The only people you'll see buying this place are the ones that would bother putting in the time to gather the stuff they want for the place and decorate it heavily. (someone like me to be honest but I'm not buying THIS manor because
it only has three rooms. I'm waiting for a manor that has multiple floors or 4 to 5 rooms. Good thing they're adding one in Calpheon in the future).
Skullmonkey
@LunaRoyal That is just an excuse to justify bad game design. It's standard PR to dress up this feature but at the end of the day it's lackluster content for a small niche group of people vs the entire playerbase, which is by definition bad game design.
You can white knight it all you want but the fact of the matter is it could have been designed with so much more usefulness and functionality in mind for the ENTIRE playerbase while still being a profitable addition to the game for the company.


Like nearly everything else in BDO it's just another example of missed opportunity and potential.

Frostix
@Skullmonkey yeah houses in FF14 have no functionality and are simply eye candy so....
LunaRoyal
@Skullmonkey Your missing the point.

I'm not trying to White Knight it. Heck, someone pointed out how the houses in Final Fantasy are more Eye candy than practical. Not all forms of housing have a purpose in MMOs. In Fallout 4 there are some unlockable residences that don't give any function except
to serve as a place to rest during a trip. You would need a mod to make it practical. Half of all MMOs use housing more as a place where players can express themselves by making a home of their own and use it as a place to relax. You won't need to pay too
much as once you stop paying rent, all your items stay in tact and you just get locked out until you pay it again. Not to mention that the contribution cost is extremely cheap for the rentable version (I know they're gonna add a non-rentable deed for the manors
that's gonna be super expensive to obtain).

Getting a manor means being able to use its exclusive furniture that can't be used in any normal residence. Most of which needed to be crafted in steps and can be an expensive method to obtain, but that's the point of a manor: an expensive investment for a
house that is used to flex or glorify yourself. You have to do the quest to unlock the manor to even do certain quests that lets you get certain furniture or parts to make said furniture. You are not supposed to like the Manor if you only see houses to serve
a practical use, like cooking or alchemy or buffs, but that's why it's not for everyone. The fact you missed the point that the manor is meant for players who want to live in an expensive yet stylist house is an account of your narrow mindset for only seeing
every addition to the game to serve mechanical purposes instead of cosmetic.
LunaRoyal
My only disappointment is how they underdelivered the number of rooms in the manor. When I see a manor, I expect it to have like, 50 rooms, not three. Hope the Calpheon one offers more rooms
Desmond1
Up for the special function of the manor! Crop quantity boost (idk maybe 10%),or extra crop slot for farming in the garden. Maybe +1 energy recovery till contract is active.The manor should have a basement,and there the new summoner/shapeshifter class
can make contracts with "his" celestial and demonic spirits,whos form he can wear like an outfit /turn in to/,every spirit has own different battle style (only 4-5 skill pro spirit,player controllable/ tanky golem,dps firefox,no not the browser,fast wind element
bird thing( 20+ spirit in the game but only 5 can be contract in the same time,switching form depending on situation. Contract is RNG.there can be stronger and weaker ones. etc its just a silly
idea,i know :-)
SummerJack
(Manor) Quest Whom Shall She Choose is not working properly please explain any alternatives
Kagedancer
Hello - This Manor is not considered "housing" for wearing underwear - but we can wear underwear outside the manor itself as it's a safe zone. Can you change the flag on the inside of the Manor itself to wear underwear like other homes?
JhaelannaBanana
@Kagedancer They dont show maids in the manor either...Which I find to be super odd. Who's cleaning that entire manor? Surely its not me 😏
LunaRoyal
@Kagedancer I seen a picture of someone using the hot tub with their swimsuit, and its a safe-zone sooooo you can use the function to toggle undergarments which is only available in your gear page when in a safe zone
Joey
Im just wondering if the Missions to get these decorative pieces are weekly missions or what? Let me explain, the mission for the Mermaid Fountain, you have to get clickety clack keys to open treasure chests to get the fountain, the treasure chests are
obviously RNG but say i dont get said fountain out of ALL 10 keys (which i did not) can i pick up the quest again when the weekly resets? or am i now unable to get the fountain because RNG found another way to bite me in the butt?
LunaRoyal
@Joey most of the manor quests seem less weekly resets and more "Do one quest to even unlock the process of getting it". I could be wrong
Eryhon
Anyway, it's a good start. I'm sure many players will appreciate it.
Afinys
People ask questions, but developers find answering questions demeaning to their greatness! they are above that! they are Gods!
piratecapn
I can see why they wouldn't add a bunch of other features to this, although if you can place your farming fences in the manor that would be pretty cool.
APTX4869
This year is the worst year for Black Desert operations. For developers, a clear development plan is important. Most players only want to play new battle content instead of rough add-ons.
Tycoon
NICE
Cancel Submit
Cancel Submit
1
View list