Not sure what a Season Server is? Don’t worry, because this GM Note has got you covered with everything you need to know!

“Season Servers” are special progression-focused servers that are available for even novice Adventurers, which can allow them to quickly adapt to the Black Desert world. 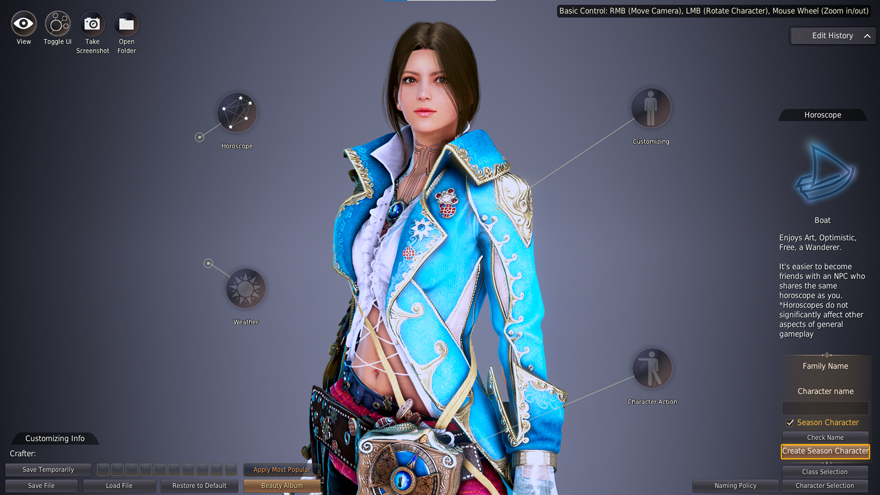 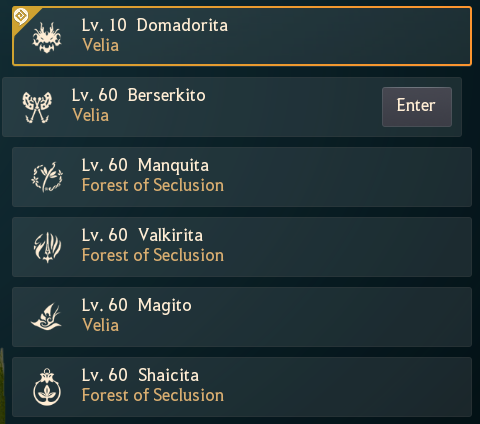 ▲ Season characters have a small yellow season indicator at the top-left of their character slot.

Now to really dive into the crux of the Black Desert’s Season Servers & Character – their perks!

By reaching certain level milestones on your Season Character, you can receive level-up rewards from the Challenge (Y) menu. The rewards for each season may slightly differ, so make sure to check out the event page to learn more about them.

As the season servers are focused on character progression, they offer 24/7 EXP buffs to allow faster progression. Just like the level up rewards, the EXP buffs may slightly differ for each season, so take a look at the event page for the exact details.

The Season Pass is only available in the Season Servers. It serves as a “guide” to what you should accomplish on the season servers and rewards you for doing so.

* The Season Pass Challenges and Rewards may differ from season to season. 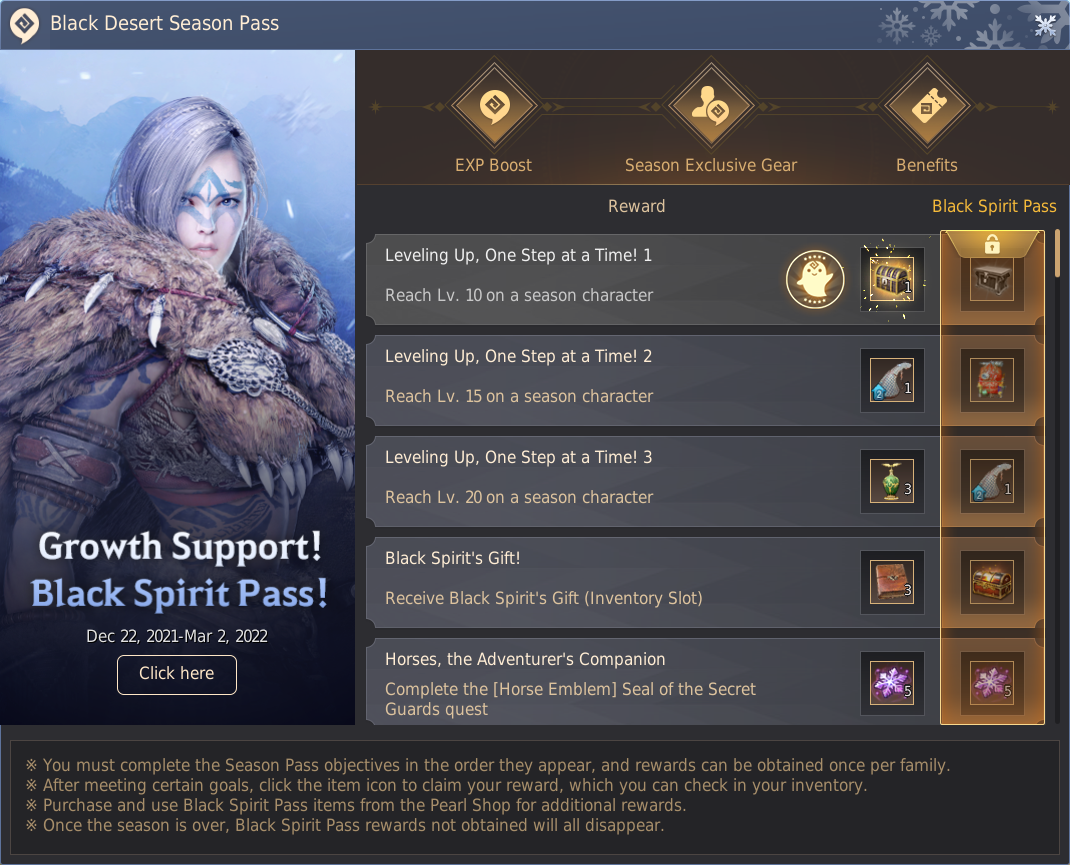 As for the final Season/Black Spirit Pass reward, [Season] Crow Merchants Guild Contribution Certificate I/II, this item allows you to access a daily quest via Fughar for a variety of rewards.

Season Servers offer a special set of equipment known as “Tuvala.” This equipment is intended to help novice Adventurers get their footing in the Black Desert world, so it has a higher rate of enhancement compared to normal equipment. 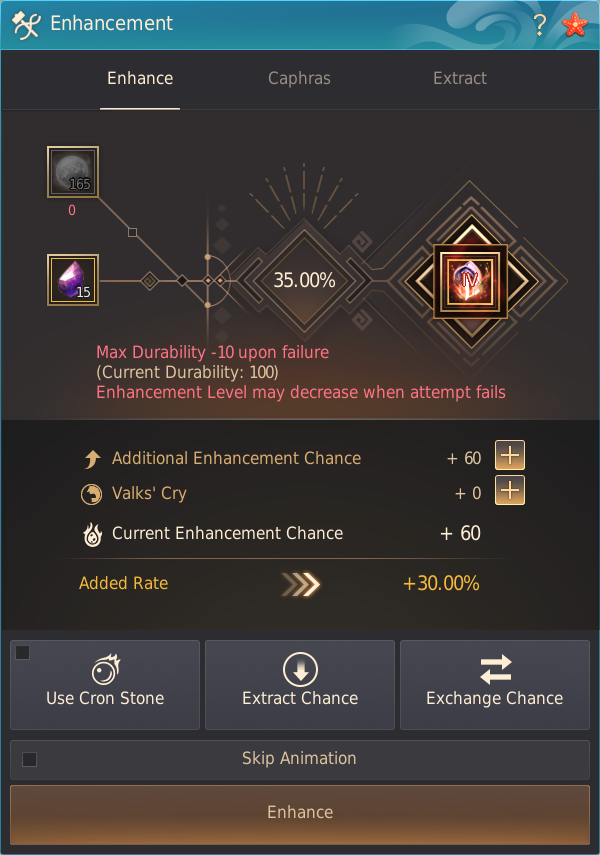 There are several ways to obtain Tuvala Equipment while playing on the season servers. For instance, After enhancing Naru Equipment to PEN (V), season characters can convert this gear in the Equipment UI for PRI (I) Tuvala Equipment.

In the Season Servers, you can obtain special materials that are used to obtain and enhance Tuvala Equipment, or can just be sold to NPC Vendors for Silver. 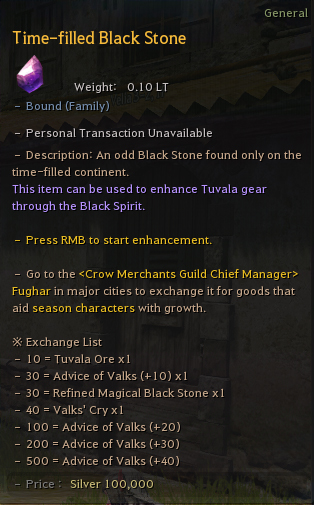 - In the Quests > Recurring tab’s “[Season] Stronger Tuvala Gear” quest list, you can accept the weekly quests from each zone’s Node Manager.

What if you created your season character as Class A, but now want to play with Class B...?

Don’t worry! Because you can use “Fughar’s Timepiece” to transfer your season character’s season status and Combat/Skill EXP!

* Quests that are in progress or completed on Class A will not be transferred to Class B.

Additionally, the Class B character must be Lv. 25 or lower to allow the transfer. (The Class A character must on a normal server with all their gear unequipped.)

Afterward, you can use your new season character to experience season-exclusive in-game content such as the Rift Echoes, Season Atoraxxion, Season Red Battlefield, and more. Make sure to check out the patch notes for more details!

If you fulfill the requirements, you can “graduate” from the Season Servers and receive several special rewards to help you get ready for the normal servers. “Graduation” allows you to quickly convert your season character to a normal character. This system is only available after a certain of time has passed since the start of the season. And of course, once you graduate, you will no longer be able to revert your character into a season character.

In order to graduate, you must not have “Fughar’s Timepiece,” and you must have claimed all the rewards from the Season Pass.
* Graduation requirements are subject to change. Please refer to the upcoming patch notes for the exact details.

When you decide to use the Tuvala Conversion Stone, make sure to avoid converting the wrong Tuvala Equipment if you have multiple of the same type.

The NPC Fughar offers a special gift quest, which you can complete to obtain the “Season Special Gift Exchange Coupon” that allows you to select one of the special season rewards.

Note: You cannot claim a reward that you’ve claimed previously.

After you graduate or the season ends, you’ll be able to receive the Gift Box Full of Memories, which contains a variety of useful items.

Not sure what happens after you graduate from the Season Servers?

You can further explore the massive Black Desert world, test your mettle against more powerful monsters, delve deeper into the various Life Skills, and more.

If you want to become stronger, we recommended starting the “Guaranteed PEN (V) Accessory questline” or “Guaranteed PEN (V) Boss Gear Upgrade questline.” You can also learn more about various content such as Cooking, Gathering, etc., and receive rewards from the Progression Pass.

View list
5
Submit
FarrArrow
Wow oh wow, what a well-written article! Now I finally understand what I must do in this strange sexy silly fun very addictive game. Thank you so very much. I didn't have "much of a clue" before I read this article.
Exnea
Very clear thanks
Gormanx
"you can graduate only after a certain of time has passed since the start of the season"...How much time we are talking about pls ?
Qahar
i love this game gg black desert
Guinea
WHEN DOES THIS SEASON ENDS?
Cancel Submit
Cancel Submit
1
View list