In order to understand the world of 'Black Desert,' you need to interact with various NPCs.

They know a lot of things you do not know, and they provide you with everything you need to explore the Black Desert.

But it is not common for everyone to touch and talk first to a stranger.

Help NPCs first to the extent of your power. They will become a strong ally and your partner. 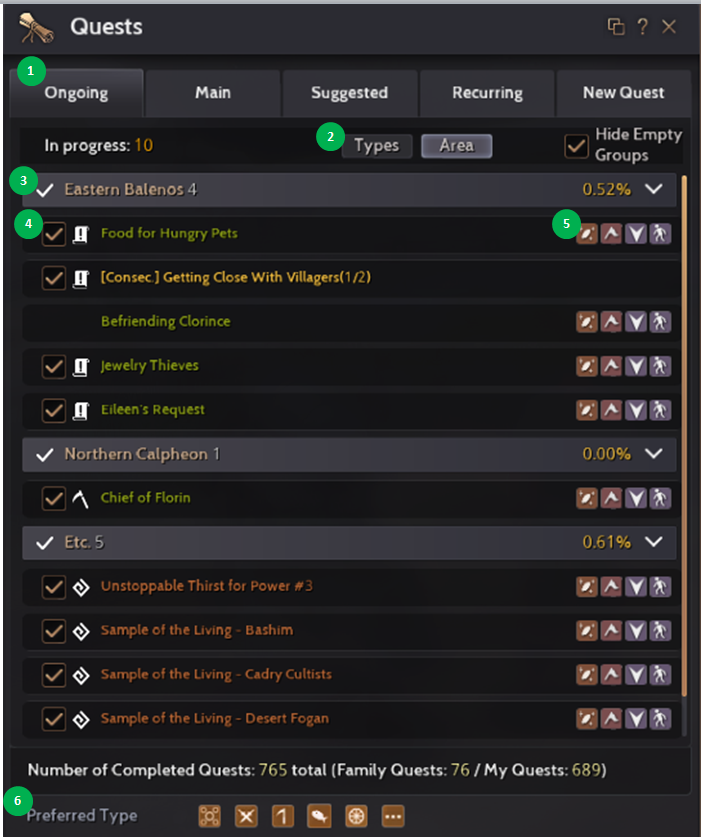 ▲ Press to activate your Quest Window.

1. Display Quest Type: You can select whether you want to view ongoing quests or suggested quests.

2. Sort: You can check quests you are conducting by region or type.

4. Display in quest tracker window: If you uncheck this box, your quest will not be exposed on the quest tracker.

6. Preference: This is a function that allows you to choose which kinds of quests to receive from Black Spirit and NPCs. You can only receive quests belonging to the activated type. 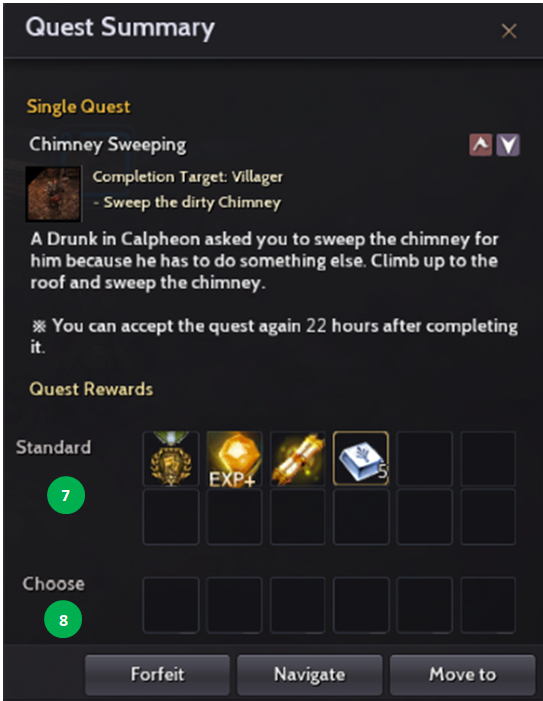 Manage your quests with quest tracker!

The quest tracker that is displayed on the right side of the screen distinguishes main quests’ (the Black Spirit's quests and story quests) from other quests.

Black Spirit's and Main story's quests will guide you to hunting grounds (grinding grounds) for each level, or to a reward of good items, they will always help you to explore the Black Desert World, so you should always pay your attention to the quests displayed at the top of the quest tracker.

The yellow part at the top of the quest tracker shows the three most recently received or completed requests.

Even if you conduct many quests at the same time, it takes just a glance to view the progress of your quests. 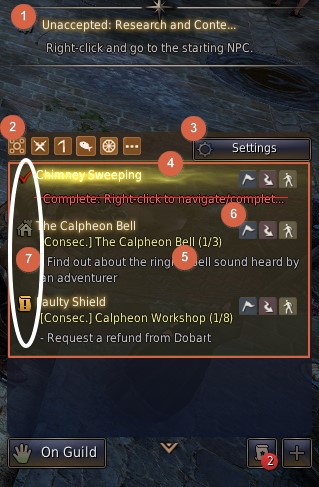 1. Main Quest: The main quest that is in progress or not yet accepted is displayed.

2. Quest Accept Settings: Click the icon to specify the type of quests you want to receive. However, this function works only at level 20 or higher.

3. Settings: You can set the quest tracker in more detail.

4. Recently Updated Quest: Up to three newly requested or completed quests can be displayed.

5. Completed Quest: Completed quest gets crossed out by a red line. You can receive rewards by talking with the designated NPC.

7. Quest Types: You can identify what types of quest it is; for example, story quest, Black Spirit' quest, and repeated quest through this icon.

8. Available Quest: This icon indicates the number of main quests you can carry out. Click this icon to guide you to the main quest of nearest place among them.

9. View details: Press the + button to open the quest window (shortcut O). You can check the quest status in more detail. 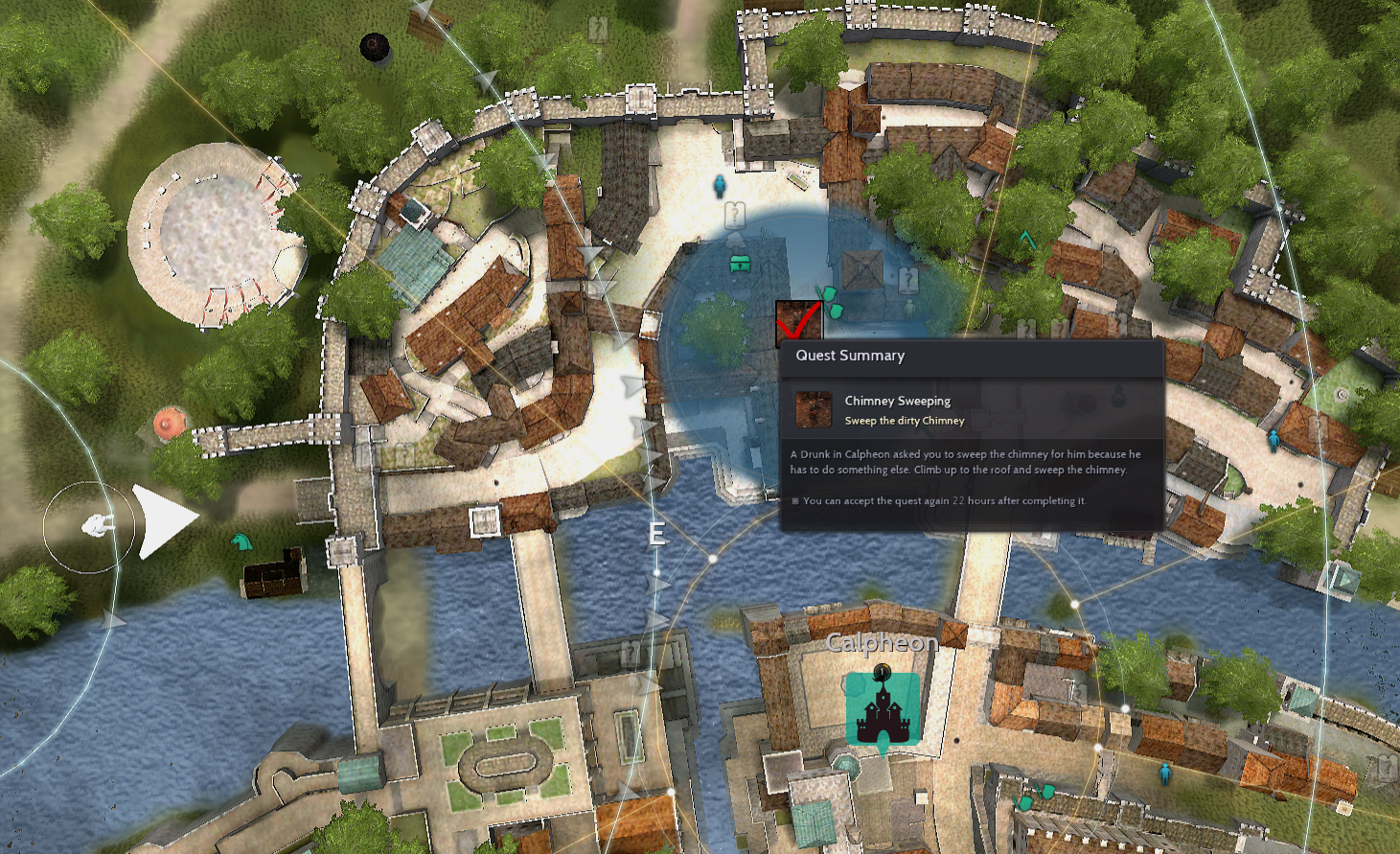 ▲ In the World Map, you can view the area and summary of your quest. 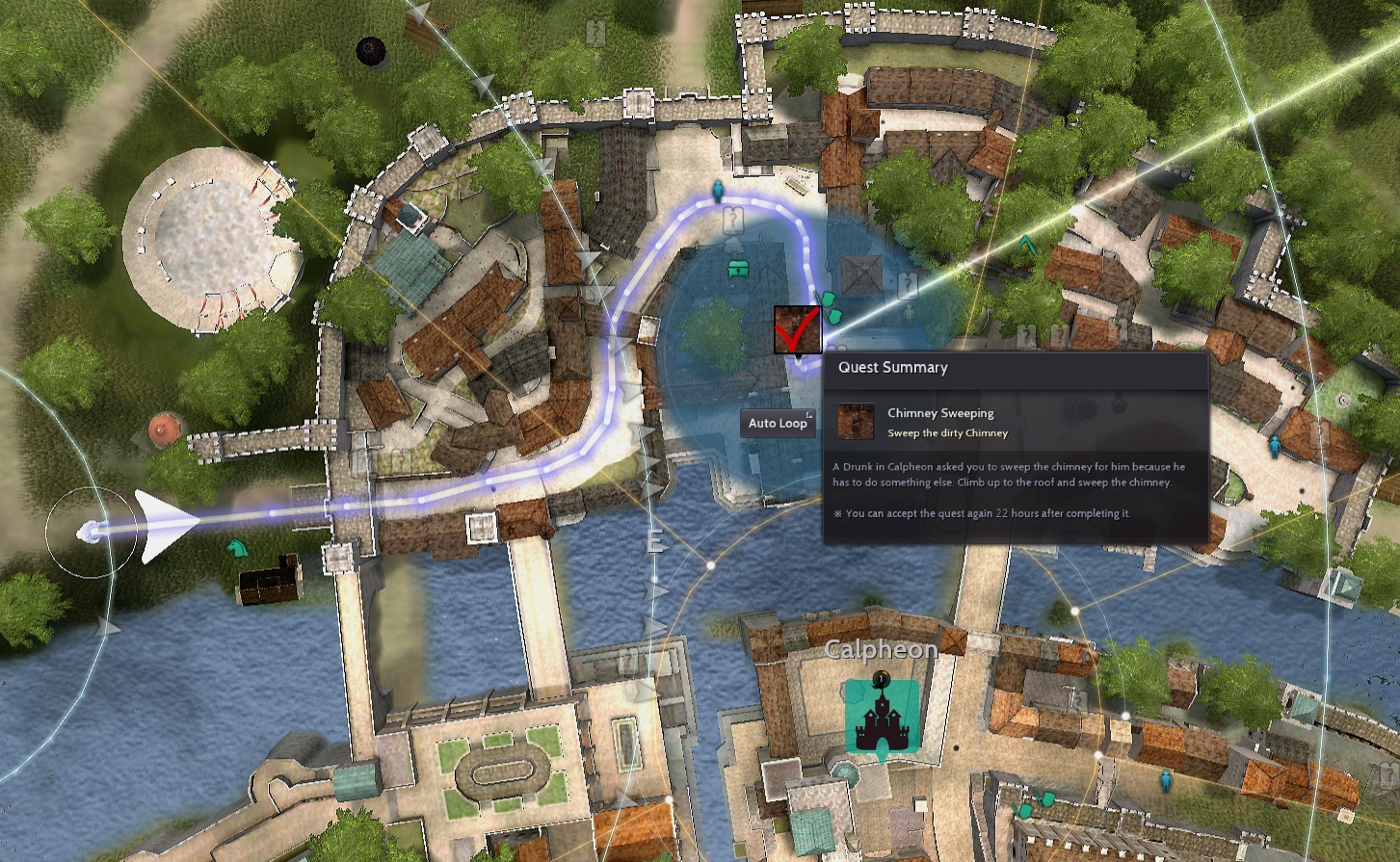 ▲ In World Map, right-click on the quest icon to view the path to the area 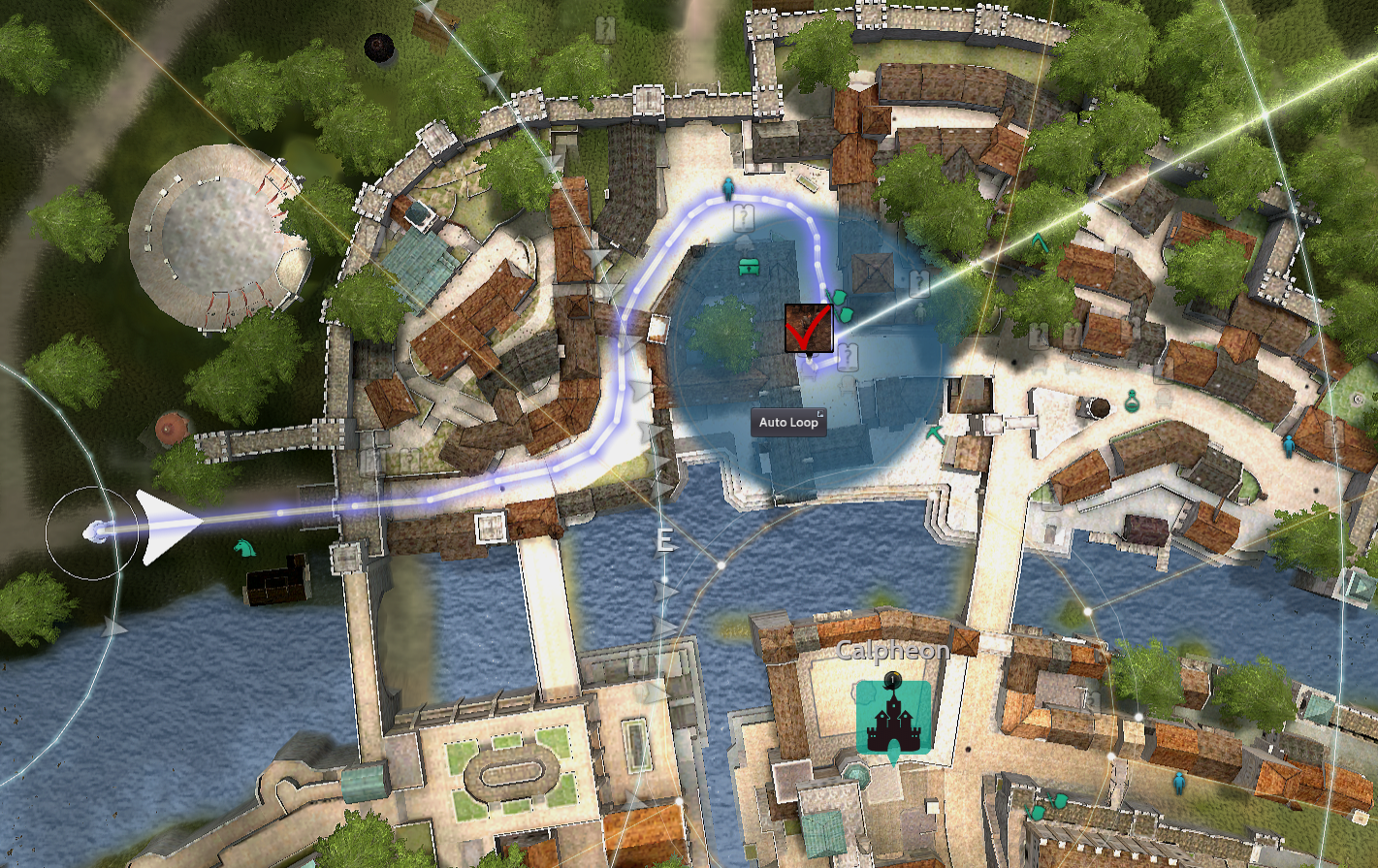 ▲ In World Map, view the quest area and the path to it.

Completing quests is a way to get a variety of rewards including contributions, useful items, and knowledge etc.

However, because there are so many quests in the Black Desert, it may be a little harder to complete all the quests you encounter at the start of your adventure.

Therefore, if you are a character of level 20 or more, you will be able to select only the type of quest you want.

If you select the 'Settings' button in the quest tracker or select the Preference at the bottom of the Quest Window (Shortcut ), you can proceed with only the quests of desired series.

If you want to proceed with a repeated quest, such as daily quests, you can select 'Other Quests'. 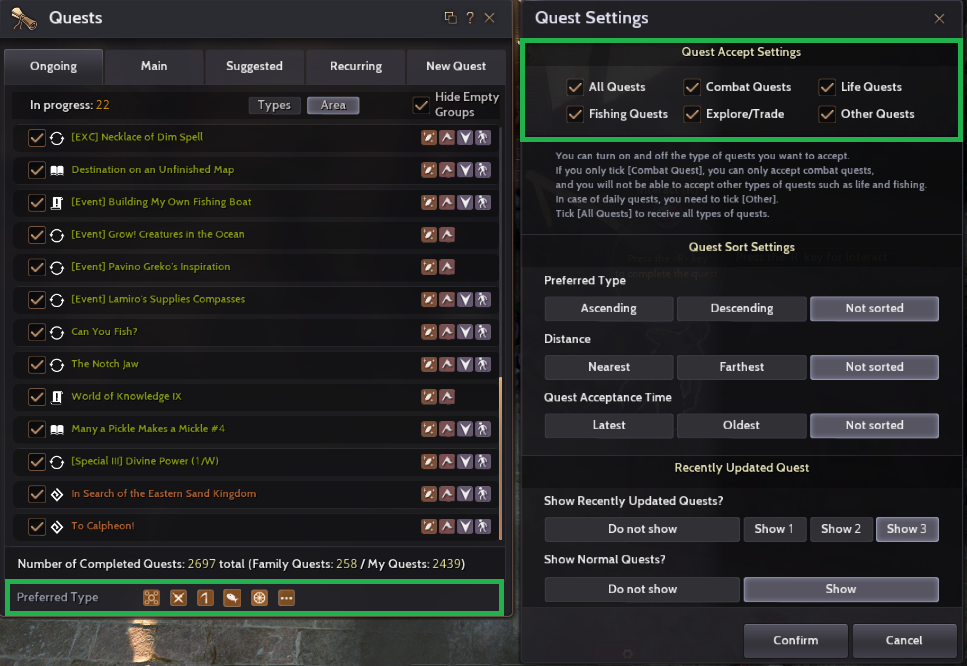 ▲ You can receive only the kind of quests you want by pressing the filter which is located at the bottom of Quest Window or the quest tracker's 'Settings' button.

Do I have to proceed with the quest?

The quest also provides the most helpful information about what is happening in the Black Desert and serves as a tutorial to help you experience various contents.

Furthermore, quests help you through rewards such as HP potions, contribution points, skill points, etc. that are essential for the in-game play.

Of course, not proceeding with the quests does not affect you enjoying the game contents, but if you want to know what is happening in the Black Desert and want to enjoy various contents, following the quests could be a good way to play the game.

I want to proceed with my favorite quests only.

Some quests only appear after you complete the prerequisite quests.

Depending on each quest, the prerequisite quest may be a different quest, or it may be achieving a certain level.

Other quests only appear when you have specific knowledge or when the character moves to a certain location. 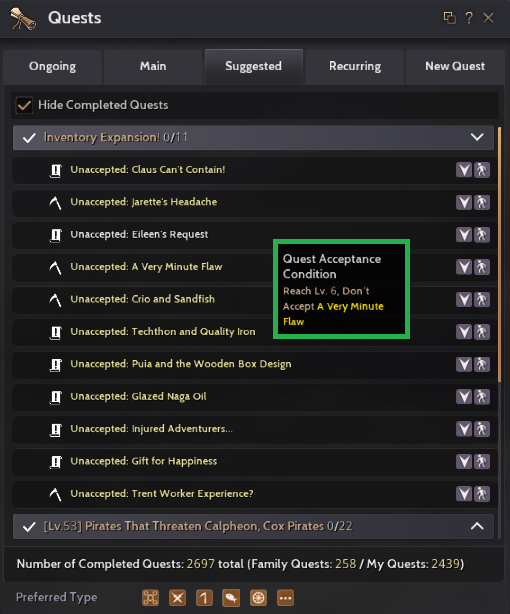 ▲ If the quest does not appear, please check the prerequisite quests

How to Receive a Quest

To receive a quest, you must go to an NPC who is waiting for an adventurer. An NPC with a quest have an icon in yellow border over its nameplate. You can get close to NPC and press the interaction key (R) to listen to their concerns.

You can check the progress and completion status according to the color of the icon border.

Yellow means the quests not yet accepted

Blue means the quests in progress

Red means the quests completed and ready to give out rewards

Note that the quest for production activities such as fishing, gathering, alchemy etc is shown in light green, not yellow when it is not received.

▲ Different colors according to the quest type.

A guild quest is rewarded only if the quest has been completed within a certain period of time from the point when the guild master pays the down payment in advance and accepts the request.

Rewards are made up of the essentials for guild operations.

There are seven types of quests in Black Desert:

You may notice what type the quest is by the icon in front of the quest title.

1. Black Spirit Quest: The black spirit gives you this quest when you reach a certain level or meet certain conditions

3. Town Quest: This is a basic quest given by any NPC throughout the game.

4. Exploration Quest: These quests send you to find new areas.

5. Trade Quest: These quests are related to trade goods.

6. Production Quest: This type of quest will require you to produce a specific item.

7. Repeatable Quest: Quests that can be repeated at set intervals.

A Crossroads quest is a quest that the contents is changed by your choice.

When a specific quest is accepted, another NPC (most of the time black spirit) intervenes and gives a new quest.

If you accept the quest, the previously accepted quest is automatically canceled and a new quest appears.

It is better to choose a crossroads quest after checking the reward rather than choosing it thoughtlessly because the reward is totally different for each quest.

If you cancel the quest, your options will be reset and you can make selections again from the beginning. 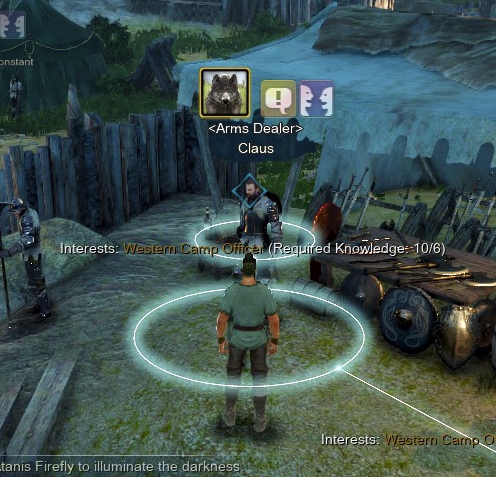 ▲ Let's help Feinia who has trouble with an injured soldier 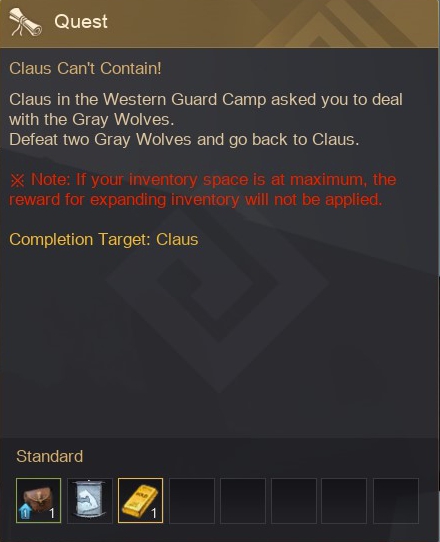 ▲ This wants you to find out about young tree spirit….

▲ Suddenly, the Black Spirit has appeared 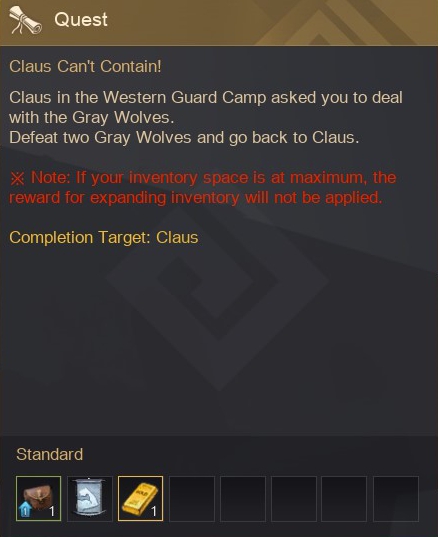 ▲ Consider a reward and choose which quest you want to proceed

When you complete a quest, an NPC offers a variety of rewards:

Contribution points, skill points, EXP, all kinds of potions and enhancers and items etc that are essential for the in-game play.

Especially, it is more efficient to obtain skill points and contribution by completing quests rather than acquiring them by other methods.

Quests that guide you through an unfamiliar system will give you reward items that are useful for you to use in the system.

A wagon that is convenient for trade, a collection tool that is necessary for collecting, the magical gemstones for transfusion, furniture that can be installed in your house etc are given to anyone who completes the quest.

You should select one of the several rewards when it comes to 'Optional reward'.

If you do not select a reward, the reward on the far left is automatically selected, so make sure to check if there is something you want.

Also, if the number of inventory slots is smaller than the number of reward items, you cannot complete the quest. The items you don't use must be sold to a store or discarded into the trash.