- You can use Fughar’s Timepiece to change your season character.

- After the transferal is complete, you will receive Tuvala weapon exchange coupons to convert your old season character’s weapons into those appropriate for your new season character.

- You can always create a new season character after deleting one, but proceed with care when doing so. 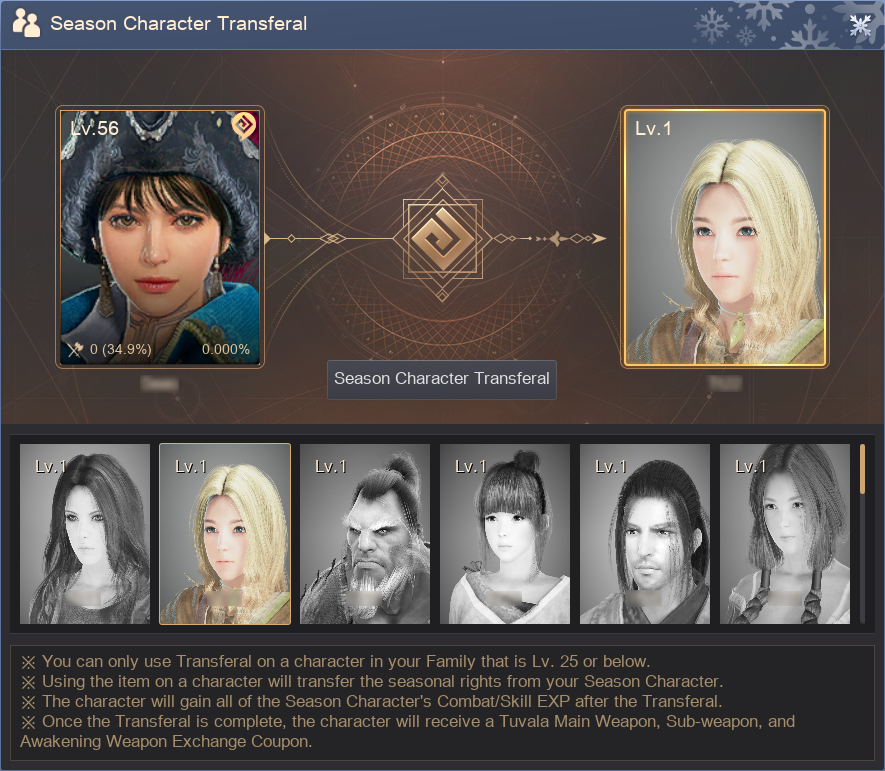 Steps on Using Fughar’s Timepiece (A: Current season character / B: New character for the transferal)

- Your current season character must be Lv. 25 or higher to accept the quest from the NPC Fughar.

- Storing character A’s seasonal gear into your storage will expedite the process.

- A will retain their current Combat and Skill EXP.

- Use the Tuvala weapon exchange coupons with A’s seasonal weapons to convert them into those appropriate for B. (Ex: Tuvala Longsword → Tuvala Longbow)

- Skill points awarded from quests will not be copied over.

- You can only use Fughar’s Timepiece once per Family.

However, deleting a character requires a certain period of processing time which varies depending on the character’s level. Also, any Season Pass rewards claimed by your current season character will be deleted as well.

Season Pass rewards are only able to be claimed once per Family, and if you delete a season character that has already claimed them once, you won’t be able to receive them for the season again.

If you choose to delete your season character to change them, we strongly recommend that you make sure that you’ve moved all seasonal rewards (such as the Leveling Aid Box) into your storage.

Also take note that if you used Fughar’s Timepiece once on a new season character, then delete that character, you will not receive an additional timepiece for the rest of the season.