Magic Crystals are usually obtained by defeating monsters. However, the types you can obtain differ for each monster zone. So, try looking in the Central Market for the magical crystals with the desired effects. 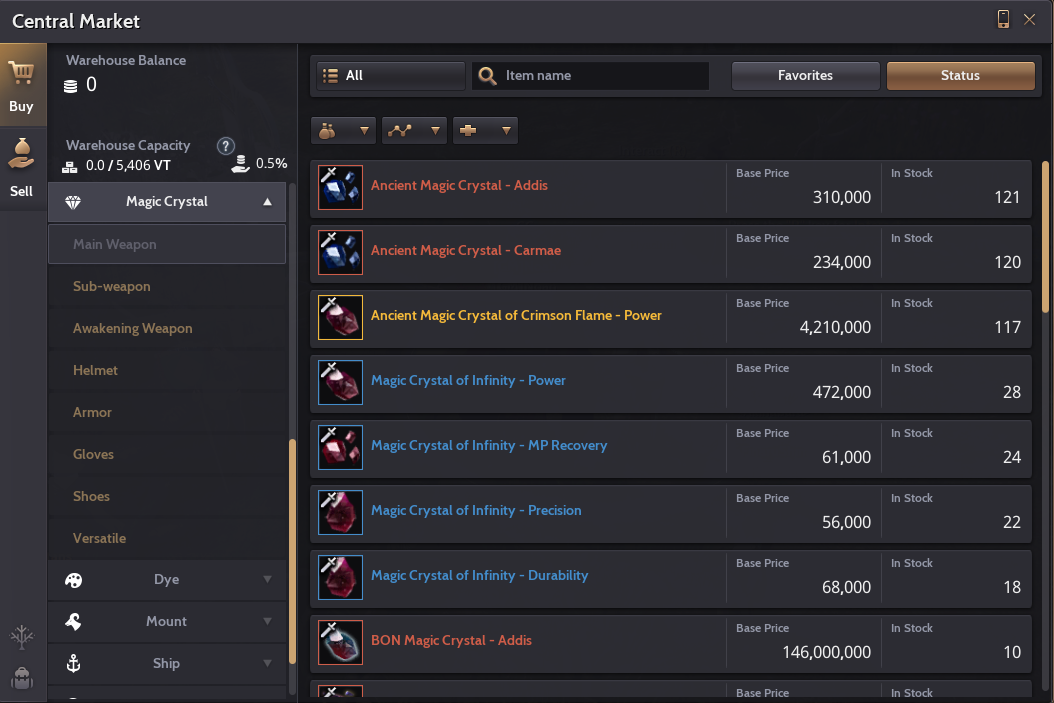 ▲ You can purchase a wide variety of magical crystals from the Central Market.

Check out the “Transfusion” guide for details about magical crystals. 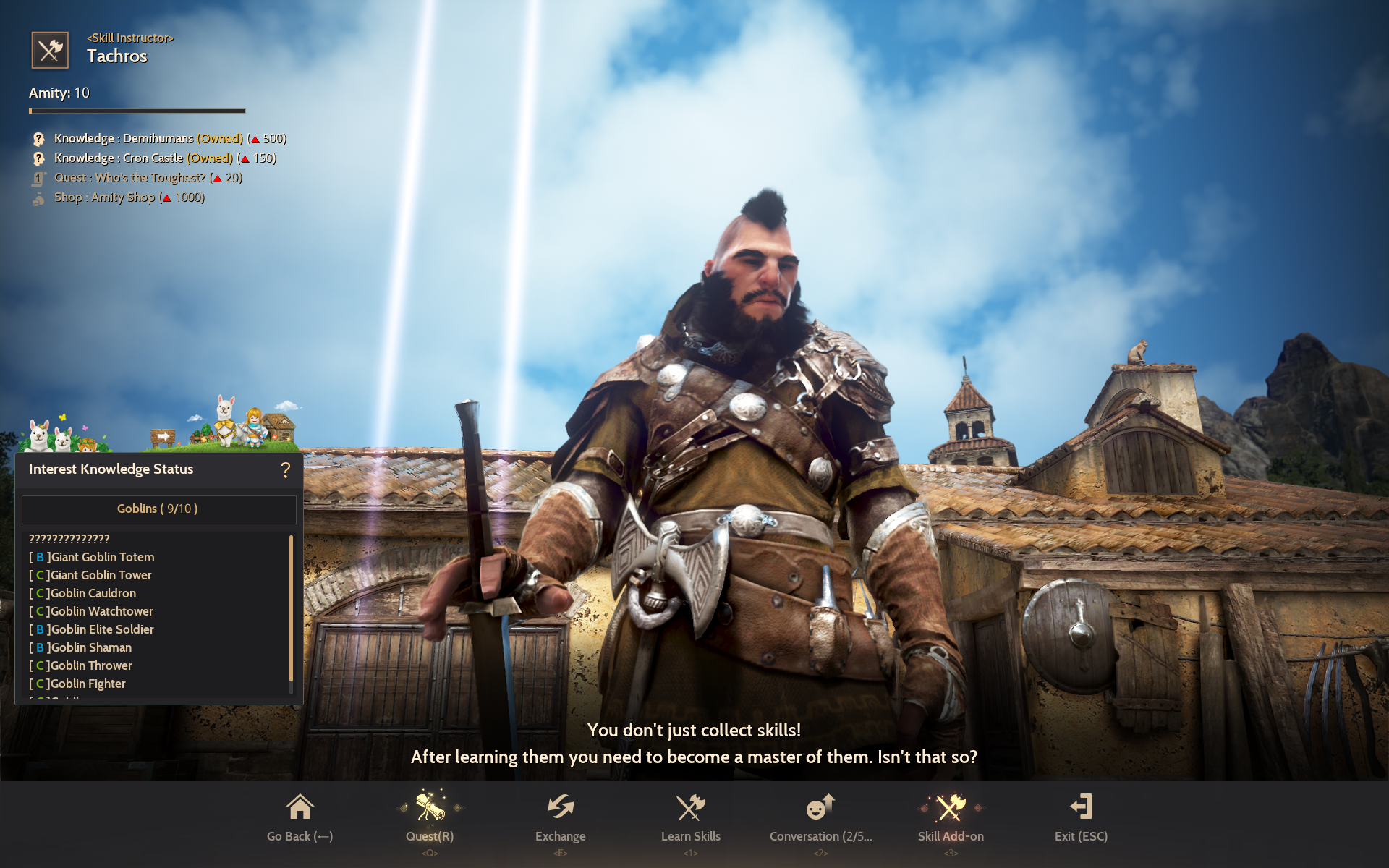 ▲ You can get skill add-ons through Skill Instructor NPCs found in major cities and towns. 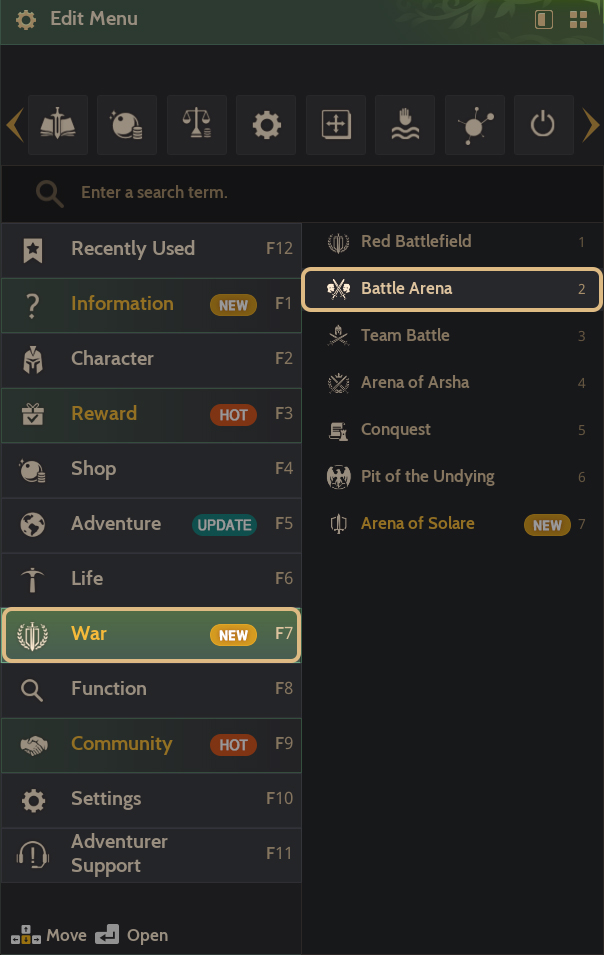 ▲ You can adjust your skill add-ons easily by entering the Battle Arena then talking to the skill instructor, Tachros.

Check out the “Skill Add-ons" guide for details about skill add-ons.

All effects that positively affect a character are known as “buffs.”

And, in the world of Black Desert, there are a large array of buffs to choose from.

Buffs that improve your combat stats are especially great for increasing your combat efficiency.

However, not all buffs can stack with each other. So, you will need to select buffs that can be used in conjunction with one another.

▲ Current buffs applied to your character are displayed on the Buff bar.

The table below lists commonly used buffs that stack together. They are listed in the order of priority.

※ The priority for the buffs were decided by comparing their expense, difficulty of obtaining, amount of stats increased, and their duration.

※ You can only get 1 buff for each type of buffs at one time. Details of each item’s buff can be seen on their in-game item descriptions.

2. Campsite buffs can be purchased through a campsite. For details about campsite, check out the “Campsite” guide.

3. Gold Bar buffs can be exchanged for Gold Bar 10G x3 (worth around 3,000,000 Silver) at major cities and towns through an NPC. However, it isn’t the most efficient buff as traveling from the NPC to your desired monster zone takes time.

Just getting your skill add-ons, magical crystals, and buffs is enough to get you started, however, there are other ways to improve your character’s combat capabilities.

If you are trying to reach lv. 61 or even higher, it will be extremely beneficial for you to know about the various Combat EXP buffs.

By the way, Combat EXP and Skill EXP are their own separate systems in Black Desert. So, it will be best for you to get both types of buffs.

※ Combat EXP buffs are calculated by adding them all together.

There are a large variety of EXP buffs, however, it may be difficult for Adventurers that are just stepping into the world of Black Desert to get every type of buff available.

Still, the Combat & Skill EXP 530% Scroll (60 min) can be purchased via the Pearl Shop with Silver. So, be sure to get them! 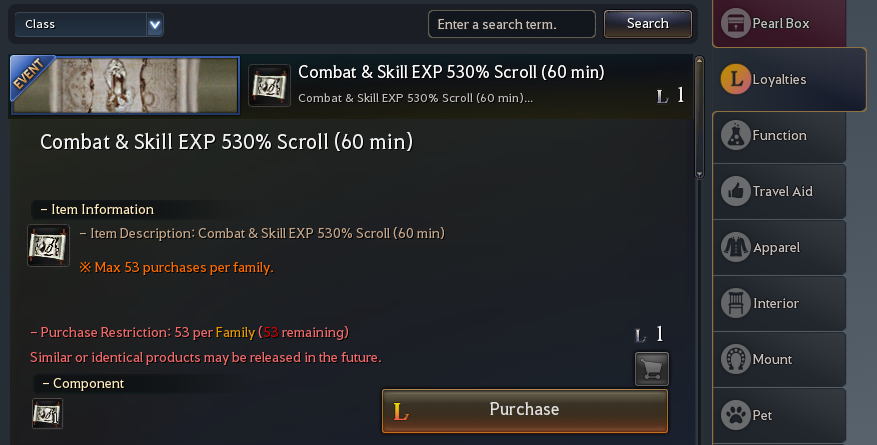 ▲ You can purchase 1 of these via the Pearl Shop for very little “Loyalties.”

You can use this item to level up quickly, but you can only get 53 of them per Family. So, be sure to use them wisely!

However, there could be occasional special events in the future that allows you to purchase more of them.

Using the Sealed Book of Combat does not get consumed but continues to give you a +100% EXP buff every time you use it during its period.

New Adventurers can obtain this item from their Challenges and login rewards. When you get one in your Inventory, you need to right-click on it to be able to use it. When you right-click on it for the first time, you will be shown a message asking if you really want to use the item. 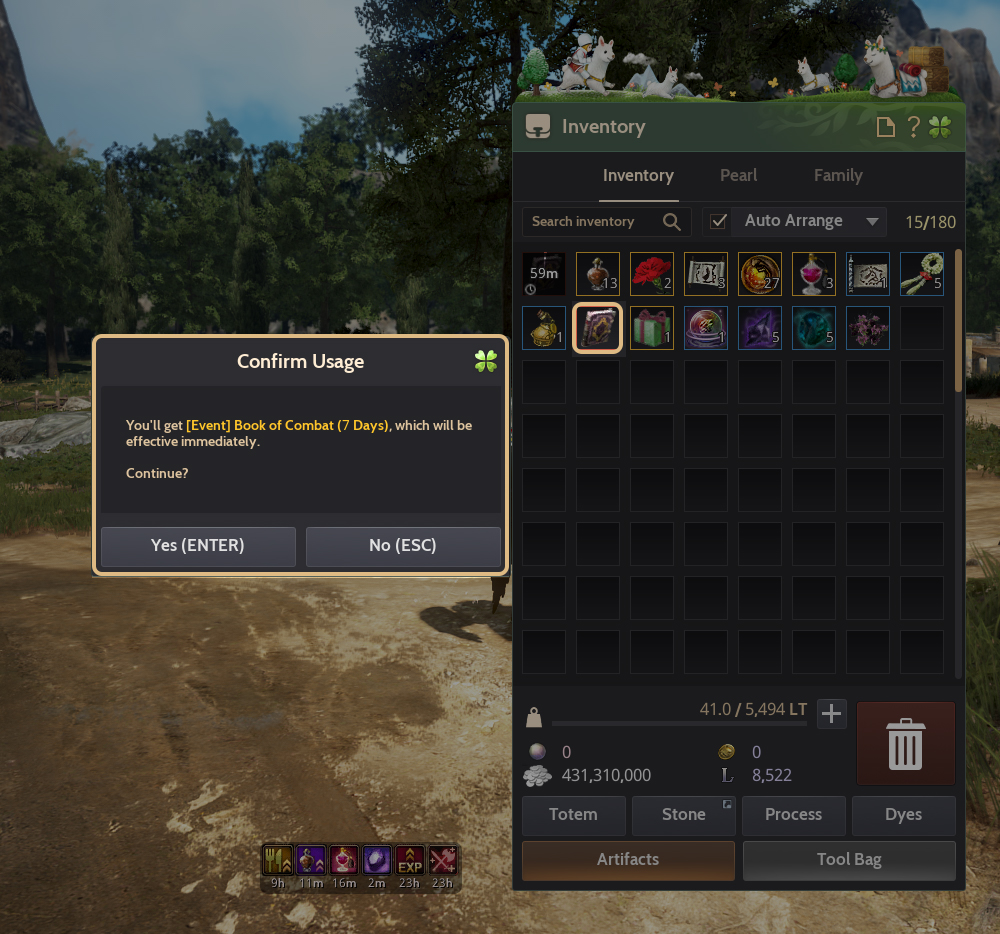 ▲ Opening a Sealed Book of Combat.

Press “Yes (Enter)”, then the duration of the Book of Combat will start to count down. You can keep using the item during the period.

New Adventurers can obtain this item from their Challenges and login rewards. They are also given out as part of events and other means. 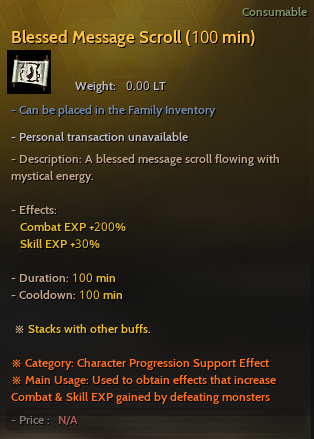 There are more ways to get Combat and Skill EXP buffs in the world of Black Desert.

There is food like the Simple Cron Meal that increases EXP gain and combat stats. You could also use Beast's Draught and other items that give important buffs as well.

There is also the Black Spirit’s buff that you can obtain by consuming Energy. 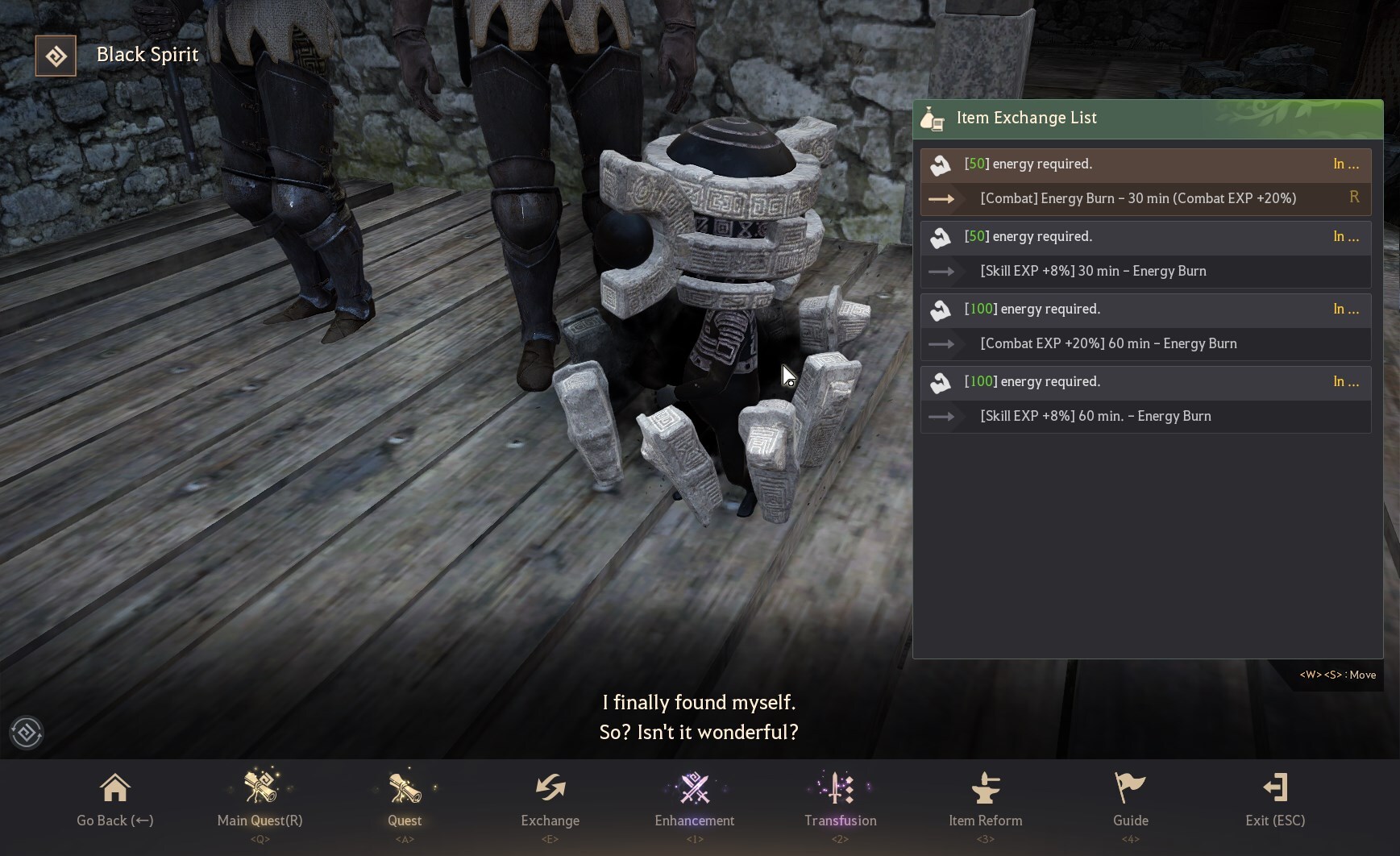 ▲ Open the Black Spirit menu > Exchange then select an option to consume Energy for an EXP buff.

If you would like to find out more about EXP buffs, check out the various guides written by veteran Adventurers.