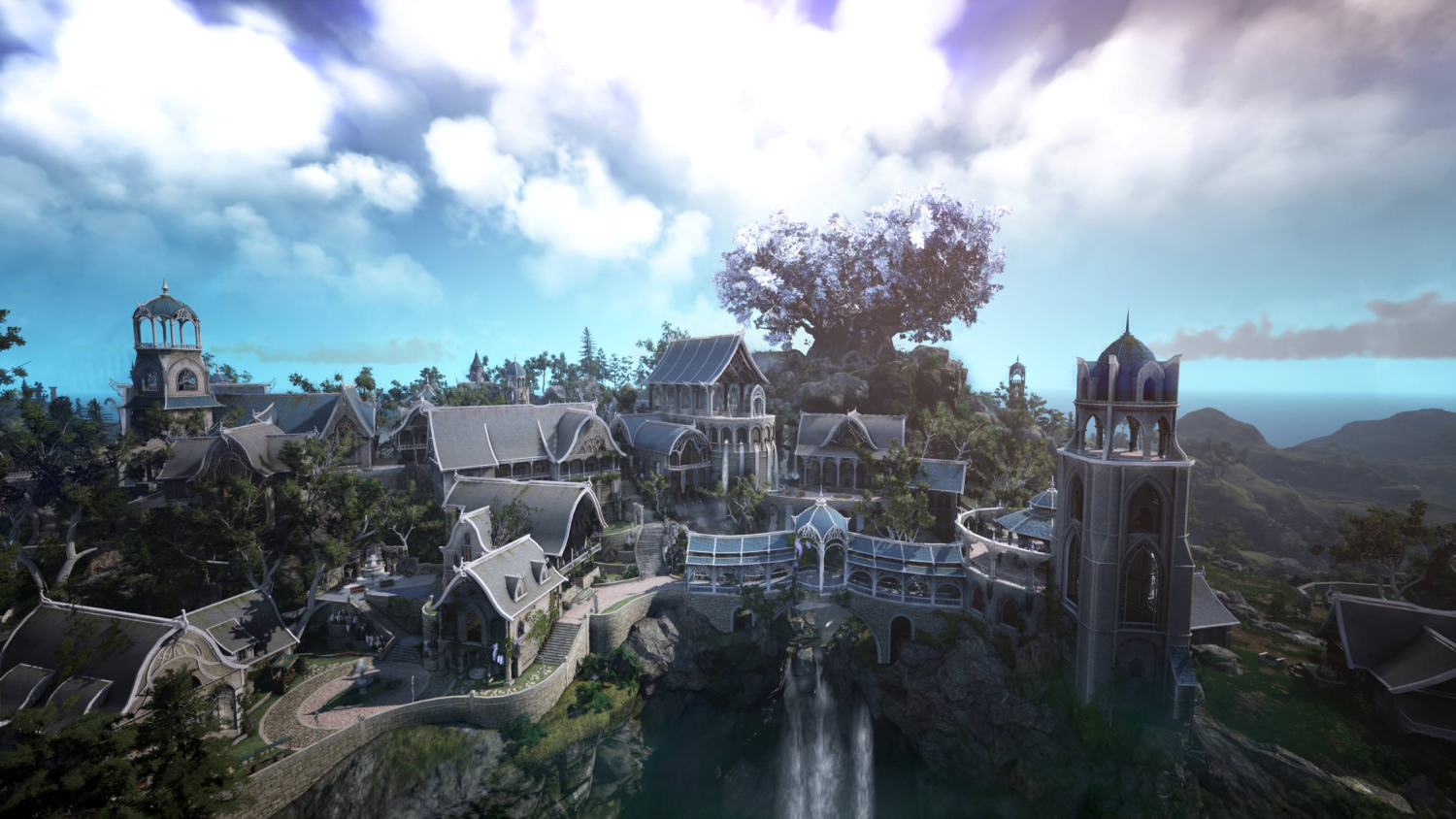 In the time before recorded history, a holy tree stood rooted in the highest place in the forest. The goddess Sylvia descended alongside the spirits of nature and named the tree 'Kamasylve.' The sun and moon gave her the energy to bring forth the Ganelles and Vedirs, and she was blessed with the verdure and tooth faires of the forest.

The king of Calpheon, Guy Seric, marveled at the sight of Kamasylvia and called it the "fortress protected by nature." The height of the large trees that covered Kamasylvia were greater than any seen before. It almost felt as if the large, tranquil trees were living and breathing. Kamasylvians were famous for mastery of the bow. Guy Seric saw this as an opportunity to bolster Calpheon's own bow mastery and sought to form a military alliance with Kamasylvia. Although hesitant at first, Kamasylvia agreed to Guy Seric’s persistent proposal. Kamasylvia sent its archers to the Anti-Troll Fortification and Saunil Fortress in the south. Nelydormin, the Elf Saint, led a group of priestesses to Longleaf Tree Sentry. To unwitting observers, it seemed Calpheon benefited most from this alliance. However, peacekeepers saught to hide the truth from outsiders that Kamasylvia and Grána were in the middle of a bloody civil war.

Brolina Ornette, who became a queen at a young age, did what she could to resolve growing tensions in Kamasylvia. She was born with strong Ganelle powers--both wise and with a strong spiritual connection to nature. The people of Kamasylvia praised her as a worthy queen. However, the ongoing war was a different story. The Ahib, one of the Vedir faction, constantly harassed Kamasylvia, something that greatly angered Brolia Ornette. Things were not always like this between the Ganelle and Vedir. The goddess Sylvia created Ganelle and Vedir from the energies of the sun and moon. However, the calamity that swept across the land in Elionian Year 235 put their bonds to the test. The descendants of Sylvia, who only sought a life of extravagance, experienced their first trial when the dark spirits invaded their lands, and their lives only worsened over time. The descendants of Sylvia could only rely on the power of the Kamasylve to survive. The ailing land cried out in pain to the descendants of Sylvia. Upon hearing the cries of the land, they prayed but the goddess did not answer them.

The Vedir searched for a source of power to repel the invaders. Unfortunately, the Vedir were unable to find a source of power greater than Kamasylve itself. One Vedir proposed burning the Kamasylve to harness its power. The power that came from burning the Kamasylve was powerful and destructive. But as this was done, the power of Kamasyvle became unstable. A great sense of loss resonated throughout the land when Kamasylve’s power began to fade away entirely. Fortunately, it was the song of the forest that woke Kamasylve from its slumber. The song of hope resonated throughout the forest for the first time in a very long while.

The black spirits that once ran amok disappeared from the land. However, the descendants of Sylvia were concerned they could no longer draw power from the goddess. To protect themselves in times of crisis, they used the power of Kamasylve to forge powerful weapons. The rangers, who were skilled with the bow and sword, created the Acher Guard, who took it upon themselves to protect Kamasylvia, preventing all outsiders from entering Kamasylvia. Since then, the Ganelle and Vedir continued to drift further apart. Although the source of power was the same, each faction wielded the power very differently. The Ahib rose to challenge the Ganelle. The Ahib were the factions of Vedir that relied on supernatural powers. Many say that Ahib came into existence during the time when the Vedir burned the Kamasylve for its power. The Ahib were arrogant and looked down on other factions. They went as far as to discredit the long history of the land. This led to Kamasylvia branding the Ahib as heretics. As a result, there was a sense of mistrust between the Vedir. Some declared their neutrality between the conservative Acher and the radical Ahib. The group of Vedir that declared neutrality possessed dark powers, unlike the Ganelle, but they still fully inherited the Kamasylvian rituals and were entrusted to protect Kamasylvia. The Acher, Ranger, Dark Knight and Ahib found it difficult to find a common ground.

The Ahib grew even more arrogant as time went by. There were rumors that the Ahib were involved in suspicious activity in Loopy Tree Forest and Kabua Mountain. The Acher Guard set up posts to closely monitor and prevent the Ahib from further entering their territory. The Dark Knights also opposed the Ahib, but the Ganelles grew even more resentful against the Vedir faction. They openly expressed their discontent towards the Vedir. The Acher were not afraid to wage war, while the Vedir faction knew they were greatly outnumbered and at a disadvantage, numbering just over half the total population of the Acher. As tensions escalated, the Dark Knights left Kamasylvia. On the day the Dark Knights disappeared from the history of Kamasylvia, the Acher moved against the Ahib, defeating them and forcing the Ahib to flee southeast. The Acher tried to exterminate the Ahib, but were forced to retreat at Ferocious Salun Bear's Realm.

It is said that the ferocious Salun Bear cannot be reasoned with. With their monstrous mass and eyes that glow in the dark, the Salun Bears are a terrifying sight. In spite of that, the Ahib were able to find a common understanding with the Salun Bear. The Acher had no choice but to retreat from the border of that barren land where thorny vines grew. The Acher focused on healing the ravaged lands that resulted from the frequent conflicts. They also needed to find a way to preserve the life force of Kamasylve. Some of the Vedir faction did not leave Kamasylvia. Some of them possessed Ganelle powers while others went so far as to seal their power as a sign of discontent with Vedir as a whole. Regardless, the Acher allowed them to stay in Kamasylvia.

8 years since the Ahib fled to the Arid Land... an Ahib stronghold arose in O'dyllita, a land shrouded in darkness, as rumors abound of a new weapon created from their alliance with the Salun Bears. The once dried-up thorn briars now bear murderous intent, as the barren soil now radiates with a crimson hue. In the northern plains of Kamasylvia, the Lemoria Guards kept a wary eye over the Ahib while bolstering their defenses. One day, the Lemoria Guards and Ahib from the Arid Land were caught in a skirmish at the Duzak Tunnel. The Lemoria Guards called for reinforcements, but the results were disastrous. They lost half their forces in the fight, which ended with the Kamasylve Priestesses sealing off the tunnel, as the Ahib withdrew. They were not the same Ahib as before. What did it take for them to become so strong? It was as frightful thought as meeting with the dark spirit. As the Ahib's reach continued to expand, the Achers grew restless. For the moment of the Kamasylve's restoration was ever so near. Yet with the current tide of the Ahib, peace may be a lost option...

Queen Brolina opened all the gates and roads coming into Kamasylvia. She sent out messengers to Calpheon and Drieghan.