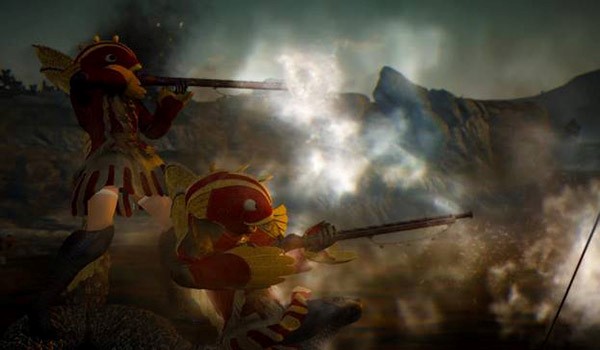 Have you ever seen the in-game announcement that says “Blue Whale has appeared”?

Well, it’s not totally wrong. The announcement means that Blue Whale appeared somewhere in the ocean. They are large monsters, meaning you can’t hunt it single-handedly. You should hunt it down together with others with guns. It can be scary for a beginner.

However, this does not mean the Blue Whale is out of your league. While it requires multiple players, a hunting gun and a mount or boat, this is all it takes to participate. Stop worrying and just give it a try!

Hunting! I Choose You! 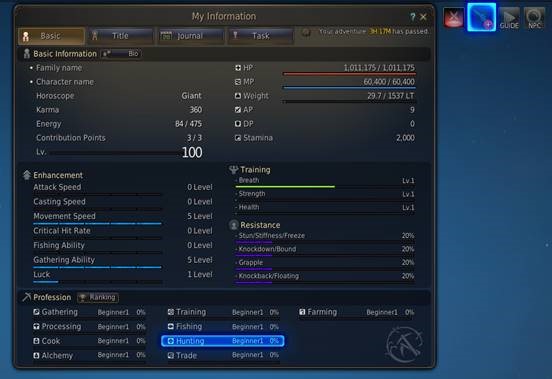 ▲ You can see the hunting level in the life section of character window.

You can see that there is ‘hunting’ in the life section. If you never tried it out, your level will probably be at Beginner level 1. If you hunt down the Blue Whales and the Fugitive Khalk, this level will go up in no time.

Let's take a look at the top-right corner of the screen. Sometimes there is a + icon beside the handgun icon. This means that a Raid Hunt Monster such as Blue Whale or Fugitive Khalk has appeared.

▲ A worldwide announcement notifying the adventurers about the Blue Whale

Getting Ready to Hunt

Just like you stock up some potion when you go hunting, you need to prepare for hunting as well. But nothing too fancy.

You can’t harm a hunting monster with normal attacks. You can harm them only with the hunting muskets.

You need to make the muskets yourself since you can’t buy them at the shops.

You can craft it at the tool workshop at your house. The level of hunting musket depends on the level of the workshop. If you’re too lazy to make one yourself, you can buy it at the Marketplace. Go the Main Weapon section and find the musket that’s right for you.

Please note that it is possible to enhance hunting muskets with black stones. But you need to be aware of the fact that you might fail enhancement once you reach enhancement +7, and the level will go down if you fail.

Try out for enhancement +7 when you have enough money and you’re confident.

You need a mount no matter what you’re hunting.

You need a boat since Blue Whales are on the sea. Since a lot of people can get on the ship, if you have a captain, you can get on that ship and enjoy hunting right away.

Fugitive Khalk appears in the ocean rather than a continent.

So you need to hunt while running around in a horse. You don’t need a very fast one, a normal horse is fine. It just needs to fit your style.

But you will definitely need the Butcher Knife. Everything would be useless without a butcher knife.
You need a Butcher Knife to loot after hunting down a monster. Don’t forget because you can’t visit the loyalty shop once you get on a ship.

There is a variety of butcher knife depending on your hunting level, but it doesn’t matter that much. What’s important is the durability of the knife. 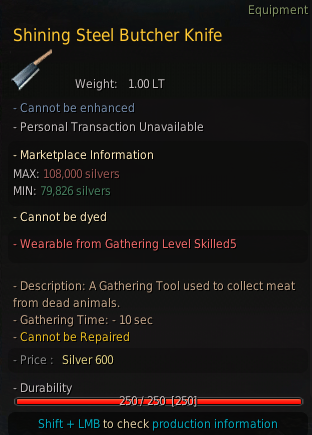 Once you are all set, you should prepare to go hunt a Blue Whale or the Fugitive Khalk. If you want to know what it’s like, try hunting some monsters on your own. You can try hunting Humpback Whales on the sea or the Freshwater Crocodiles inland. We recommend you to hunt Freshwater Crocodiles of Lake Kaia since it takes a long time to find a Humpback Whale from the sea. 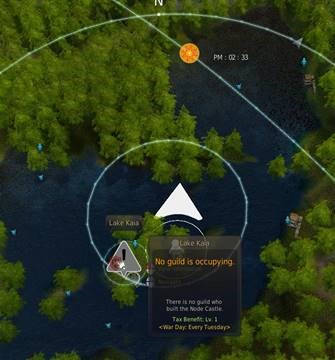 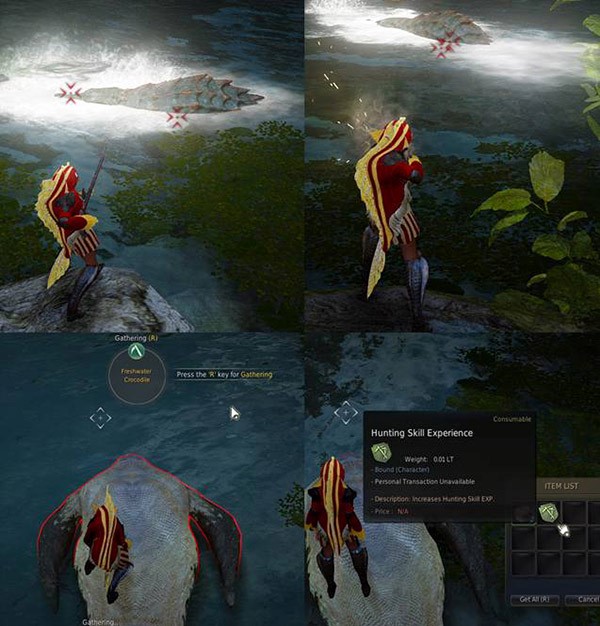 If you kill a Freshwater Crocodile, the body comes up on the water. Then you can get on its body and cut it with a Bucher Knife. If you succeed in butchering and finish looting, then you can earn hunting EXP. If you press the space bar while hunting, you can bend down. You’ll have better fire range if you bend down so don’t forget!

You can use a Hunting Musket only on the land. Observe the route crocodile moves in and shoot them whenever you get a chance. You can cut it with a butcher knife and earn hunting EXP and meat.

It’s fun to hunt the Blue Whales and Fugitive Khalks, but the rewards are even better.

In case of the Blue Whale, it appears three times a day per channel. But the time is random.

There’s nothing special that you should be worried about. Blue Whales are quite fast, so one of the party members should sail the fast boat (fishing boat) to chase down the Blue Whale and others should keep on shooting. The Blue Whales have a very high HP, so you should cooperate with other parties to hunt them down.

▲ The routes of Blue Whales

If it’s your first time hunting a whale, you should take a close look at the world chat. You will occasionally find other players asking for Blue Whale’s whereabouts, and there are a number of “Professional Whalers” in Black Desert. Get to know those guys and join their party to learn about whaling.

There seems to be hunting parties with adventurers of high hunting level these days, so you should join them and enjoy the experience.

If you succeeded in killing a whale in any from, then it is time to loot. The ‘loot right’ goes to the top 5 parties that contributed in the hunt, and party members in this list will get a chance to butcher the whale once. You can get great items such as the Blue Whales molar, so keep them!

▲ Team up with others to hunt down the whale. Remember that it is a party looting.

Fugitive Khalk appears in southwestern Calpheon around Longleaf Forest or Tungrad Forest and Hasrah Cliff in Mediah. Be sure to ride a horse since they Khalks fly around.

Fugitive Khalks, unlike Blue Whales, appear only twice a day per channel. It also appears randomly. 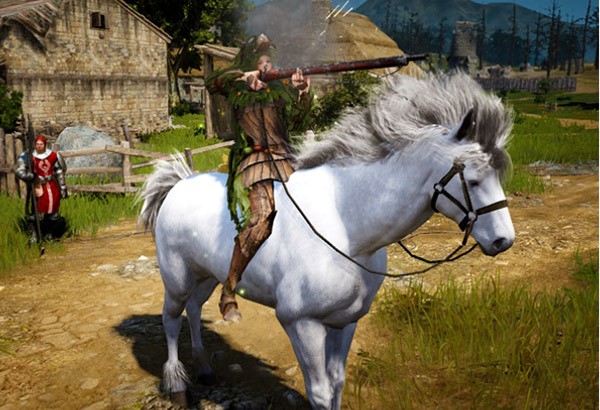 ▲ Get equipped first, then get on the horse to hunt

It is easier to find compared to the Blue Whale since the route is short and there is no restrictions in your movement. One thing you need to keep in mind is that you need to be careful while riding.

It is because you need to see where you are going and look at the sky at the same time. You’ll get used to it soon enough. The rules for receiving the rewards is also similar. Only the top 5 participating parties get to loot. 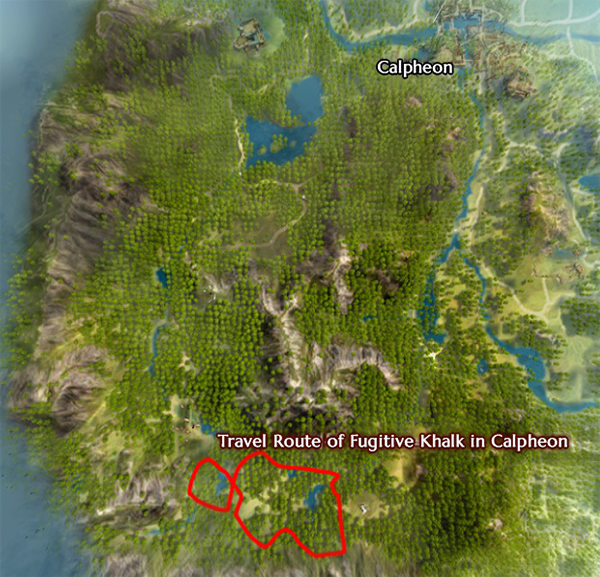 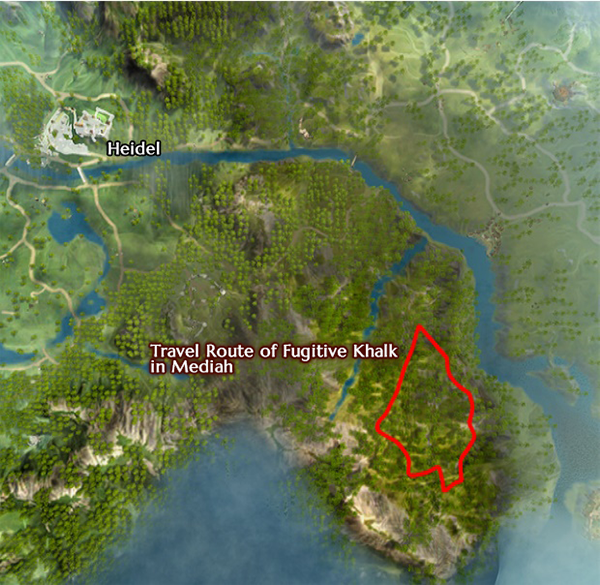 Fugitive Khalk flies in the air, so it’s good to have an understanding of the geography and good control of your horse. It might feel akward at first, but you’ll get used to it soon enough.

These are the top items that you can get!  Other items can be obtained as well.