The Hunting Grounds of Valencia 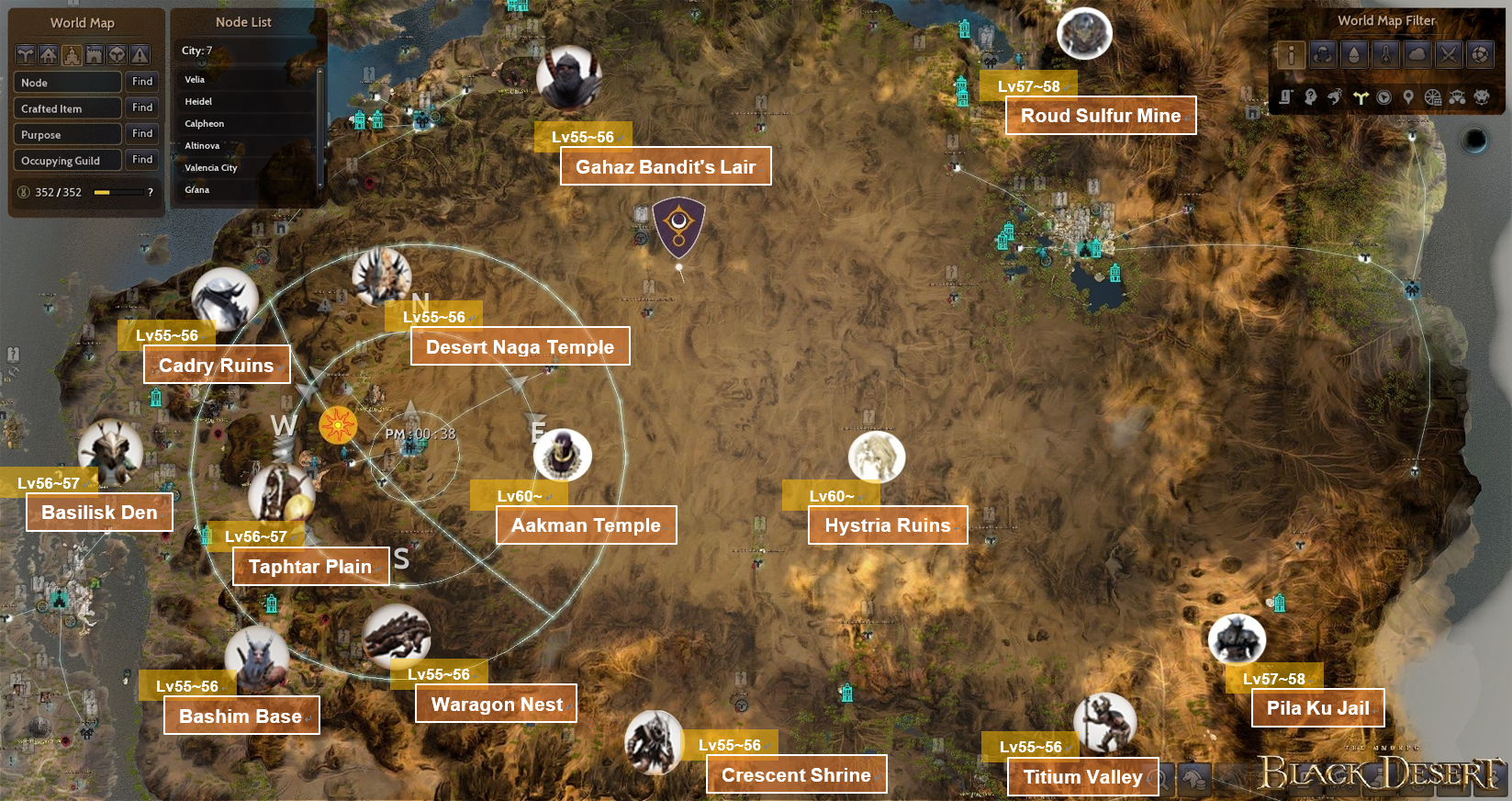 You may feel as if you’re ready to take on the world now that you’ve awakened your character. If you’re looking for challenge, then look no further. The hunting grounds of Valencia is full of challenges (and surprises).

One’s level, equipment, and skill will determine the difficulty of the hunting grounds. It’s a good idea to prepare plenty of meals, potions, elixirs, and Elion’s Tear before you start your journey.

It is possible to hunt on your own in Valencia, but we recommend that you assemble a hunting party to farm more efficiently.

The large stretch of land here is the home of the Bashim, the ancient demibeast tribe of Valencia.

The Bashims are proud of their rich culture and speak an indigenous language. Because the Bashims are reclusive and hostile, adventurers avoid contact with this ancient tribe.

The old Cadry Temple, once part of Valencia, has become a den for cultists that believe they can achieve eternal life by consuming the Black Stone’s powder. The cults worship Kzarka and believe that one day the Lord of Corruption will be resurrected. Rumor has it that the cults also kidnap travelers or adventurers to offer them as sacrifices to Kzarka.

The Waragon that inhabits Valencia is different from the Waragon species that live underground and on wetlands. The desert Waragon live in the canyon and build bird-like nests in the shade to adapt to harsh land conditions.

This region is home of the Desert Naga, who are the ancestors of the Naga that inhabits Serendia.

Because the region is located in the heart of the desert, the Desert Naga consider their home as the cradle of civilization.

The Gahaz Bandits were driven away from the Katan military a few years ago.

Gahaz Tuval, the leader of the bandits, is a well-known figure in the black market. Recently, Gahaz Tuval has captured a black dragon and is looking to return to the land they were expelled from.

The remnants of the ancient Valencia civilization can be found in the Crescent Shrine.

Although much of the ruins have been covered in sands, you can still find traces of this ancient Valencia civilization. It is rumored that the remaining Argos Saunil still hold blood festival whenever there is a crescent moon.

This is where the Desert Fogans decided to settle down and take root, but they have weakened due to many of them migrating to Serendia. Still, they are in good spirit because they live in a valley with fresh water flowing through. This valley is named after the Fogan Chief, who is like their prince, Titium.

Shakatu bought this peaceful land for his beloved Taphtar. But now, the Centaurus roam the land. Shakatu was furious and put up a bounty to have them exterminated. However, the Centaurus were too fast for the Katan Military to do anything.

The Centaurus live here because deep within the plain they have a sacred inheritance handed down to them by their ancestors, the ‘Burning Black Stone’.

This is where the intelligent and treacherous Basilisks dwell. This region is even more dangerous, because it is surrounded by rocks. Brave Adventurers have attempted to search for them, but only a few return.

“There weren’t any basilisks, only humans turned to stone. I want to forget everything!”

Roud Sulfur Mine is in the Gavinya Volcano northeast of Valencia.

It is the only place where you can mine 99% pure sulfur ores.

However, there always is the danger of a sudden explosion caused by toxic gas in the air.

Although the exact time of Pila Ku Jail’s construction is unknown, the most credible sources seems to say it was built during the reign of Valencia’s 3rd king.

It is said to have been constructed to imprison the evil alchemist, Caphras. They don’t know if Caphras died or escaped, but there is even a rumor that he has an immortal body. However, one thing is for sure, the prisoners that had committed terrible crimes are still imprisoned there.

The Aakman are a group of worshippers that worship the ancient giants of Valencia.

The worshippers will gather every month to worship the ancient giants at a place simply known as Aakman. The exact location of this place remains a mystery. However, it is rumored that the Aakmans gather in secrecy with the intention to resurrect the ancient giants.

The artifacts of the ancient Valencia civilization are buried in Hystria Ruins.

You can only enter Hystria Ruins by finding the ancient artifact device that appears in certain parts of the desert.