Initially, your black spirit is a floating ball of black smoke with glowing red eyes, but much like yourself, it will grow as you progress during your adventure through the world of Black Desert. The black spirit will be your companion, your guide, and that nagging voice that leads you forward. 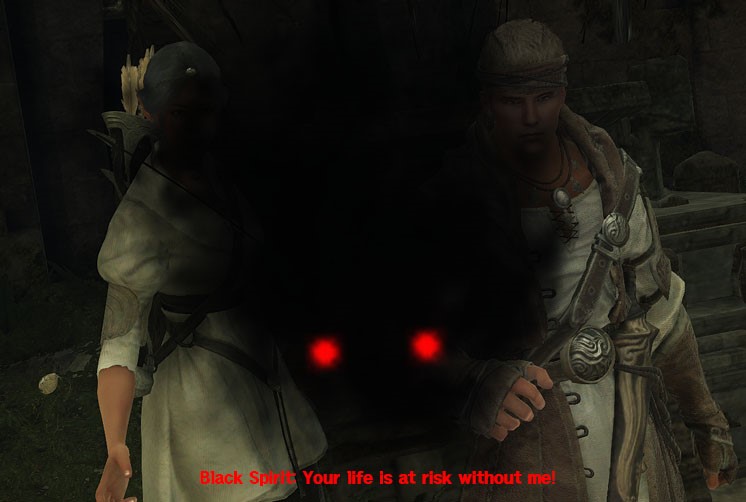 The Black Spirit will offer quests throughout the game. Often, these are triggered by exploring new areas, accepting other quests from NPCs, or reaching specific levels. Some of the quests will have you explore ancient artifacts that empower the Black Spirit to unlock new abilities.

Black Spirit can be summoned at any time via the shortcut key [/]. Please note that the default shortcut key will depend on your keyboard layout. 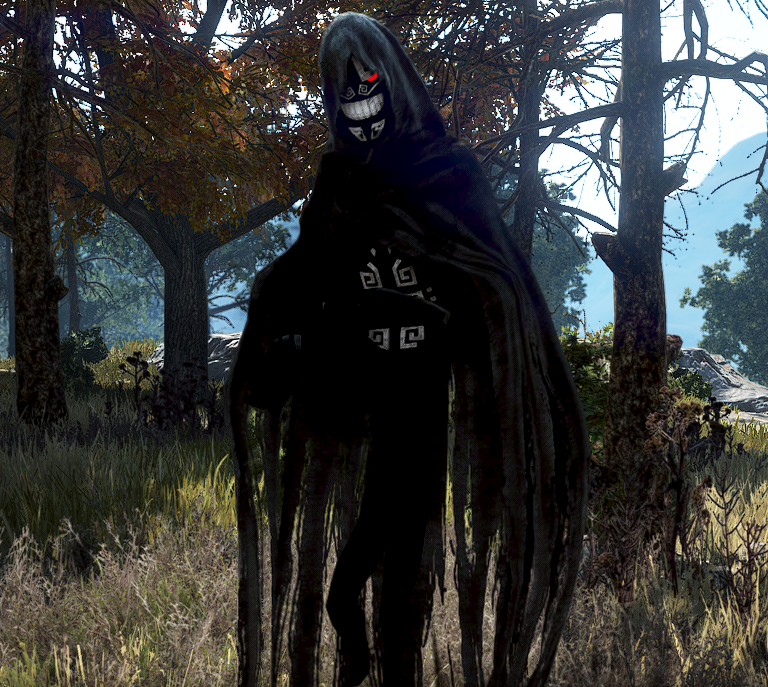 ▲ Black spirit changes its appearance as it grows. 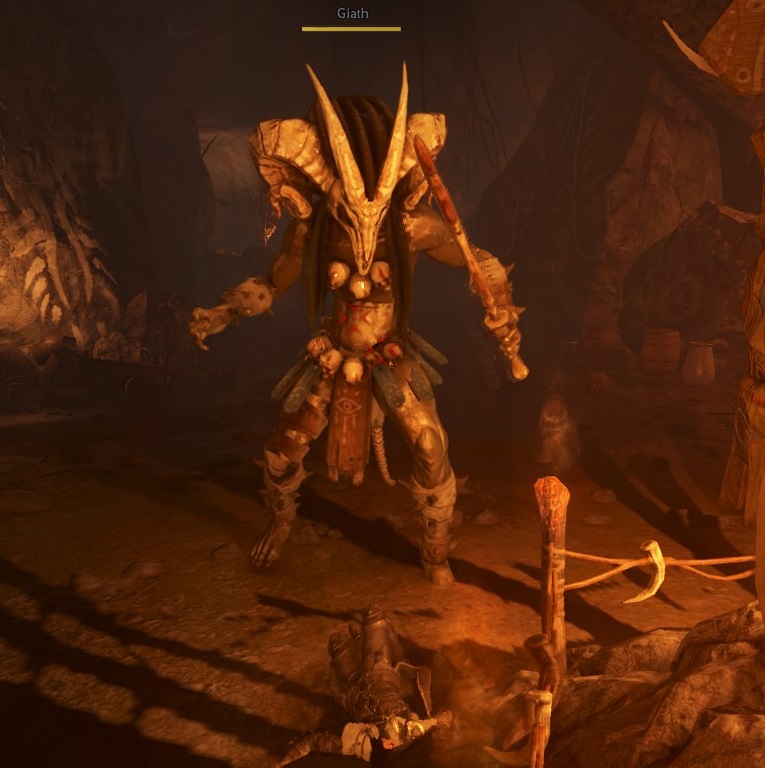 ▲ You may summon a boss monster as you proceed with a Black Spirit quest. 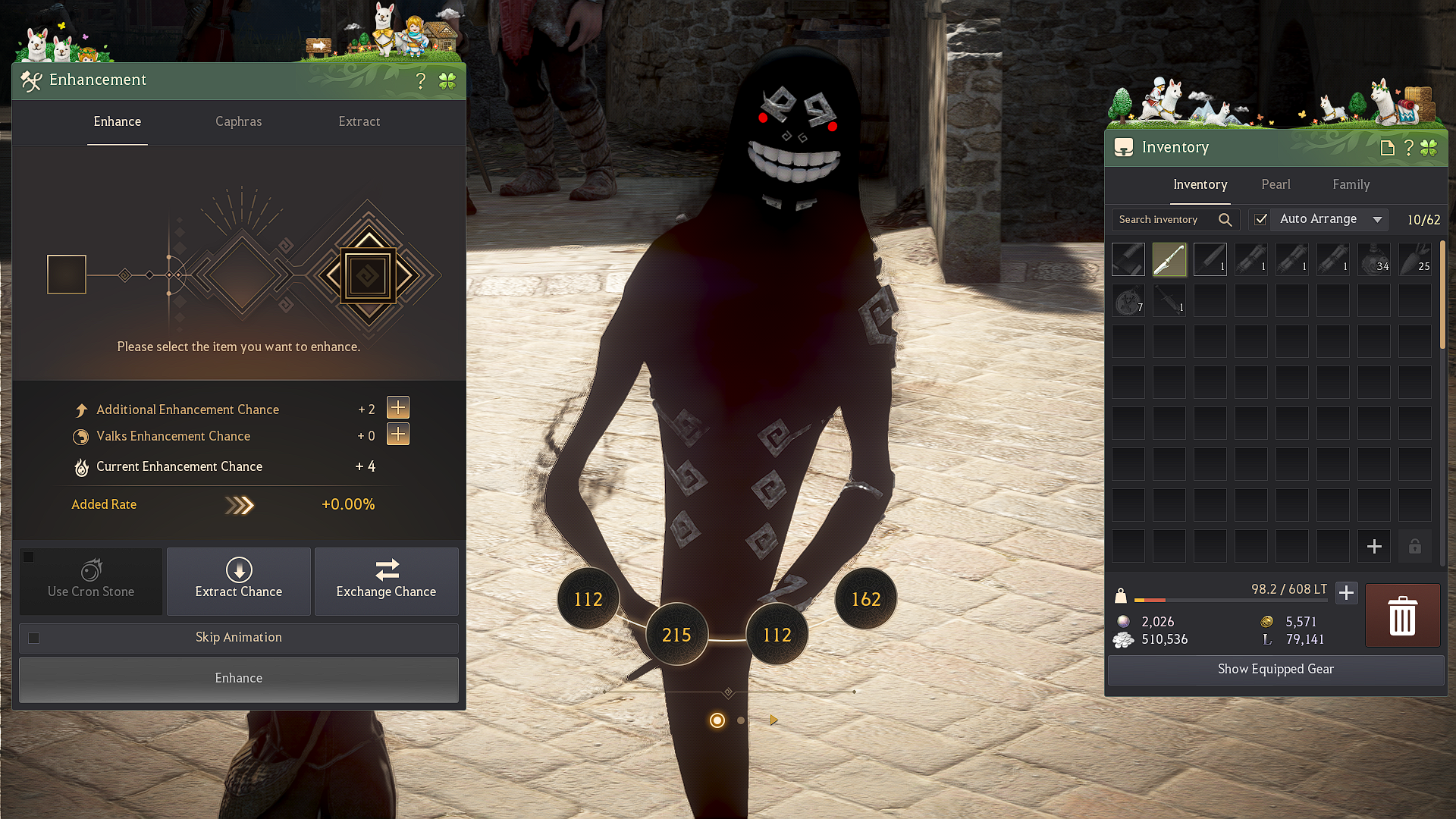 ​​​​​​​▲ Enhancement and transfusion are essential to become stronger.

Additionally, remember that you need to complete a quest from the Black Spirit to level up to Lv. 50. Even if your character has reached full EXP, if you see you cannot level up, you must complete the Black Spirit's quest! This is important, as Lv. 50 unlocks the game’s PvP content.

Some features of the game are only unlocked via the Black Spirit, and they’re only made available after completing specific quests or achieving a certain level.

This option will let you see all the main quests currently available to your character. These include the ongoing main quest story for every territory, your character’s Awakening and Succession quests, as well as additional quests unlocked by the previous two, such as useful items given as gifts for completing them.

These are other quests given by the Black Spirit. Here you can find:

- Suggested quests, which tend to be introductory quests for many of the features available in the game. For example, as seen below, Adventure Logs or unlocking the ability to obtain Godr-Ayed weapons.
Many lengthy secondary quests also start via a quest from the Black Spirit. For example, as seen below, Crow’s Nest’s or [Elvia] Obsidian Ashes’ once per family quest chains.

- Recurring daily or weekly quests. Many of them are quests that will reward you with scrolls to summon bosses with. Defeating these bosses serves a variety of purposes, such as obtaining their looted items for another quest’s objective, and being a source of black stones.
These scroll quests are unlocked as you progress through the main quests with your character.

- Event quests. These change every time there is a new event or feature added to the game. 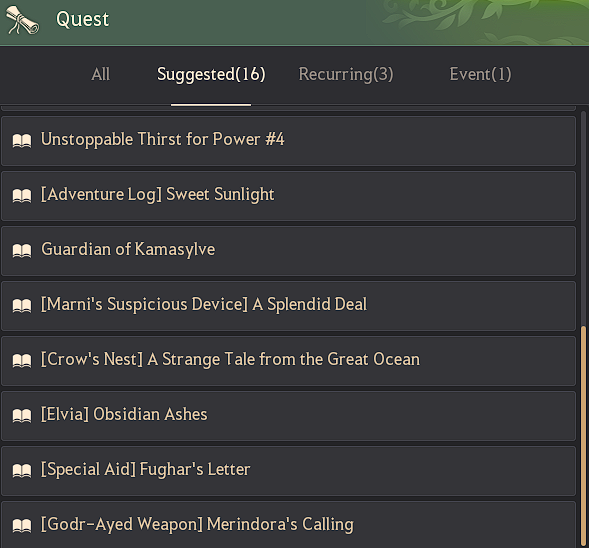 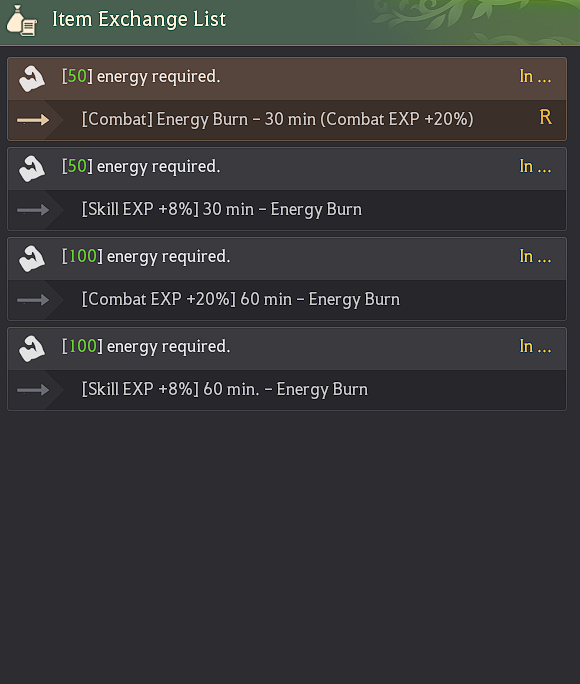 This feature allows you to enhance, improve, your equipment using black stones. The statistics increased through enhancement overwhelm the default values of any equipment, so it is considered necessary as your adventures progress.

This feature allows you to insert magic crystals into equipment with open slots. Depending on your play style and your class, you will discover that many options are available for customization.

This feature allows you to give additional effects to equipment items using reform stones. These stones can be obtained in different ways:

- You can craft weapon and armor reform stones if you set the purpose of a house as a refinery and send workers to craft them. Depending on the grade of a reform stone, the result of reforming equipment can be different. For non-boss equipment.

- You can loot unique stones from World Bosses to improve your boss Awakening weapons and boss sub-weapons.

- You can craft certain crystals referred to as cups from materials obtained in Elvia content to improve your yellow-grade accessories. 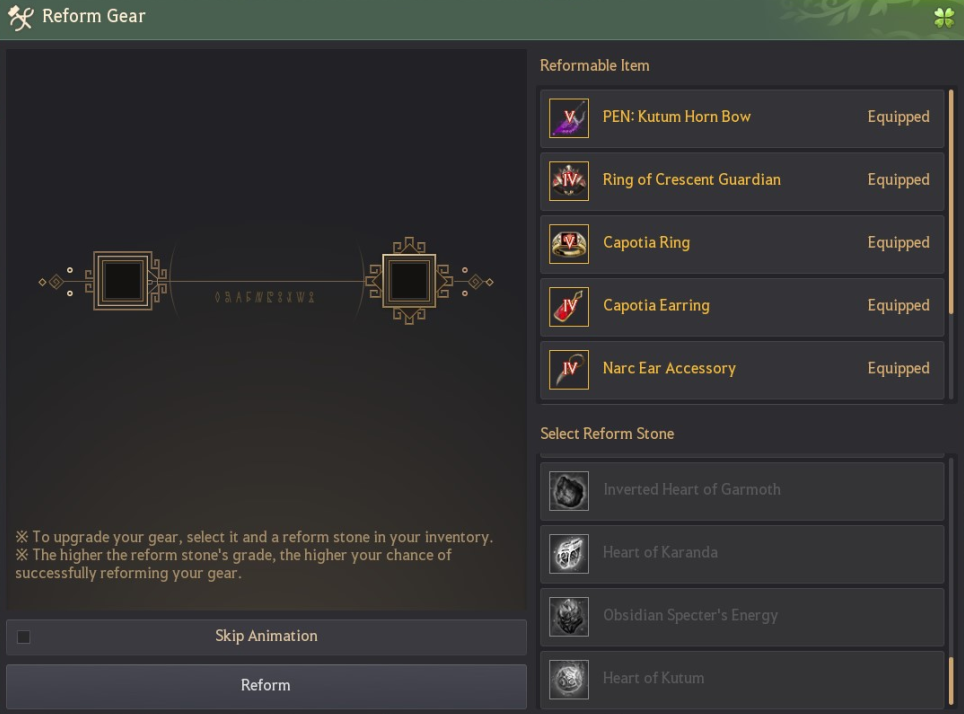 ​​​​​​​▲ If you have a valid equipment piece and matching reform stone in your inventory, the window will let you know in its bottom right section.

When you want to enjoy adventures in other areas besides combat, such as fishing, trading, etc. you can get help from the Black Spirit. There is a vast amount of guide objectives that will help you experience different activities the game offers. For example, as you advance through the various Life skills, the Black Spirit will give you newer guide objectives for them, marked as leap quests.

Additionally, we also recommend that you listen to the guiding voice of the Black Spirit every time it has something to say, because it will give you important information during your adventure in the world of Black Desert. 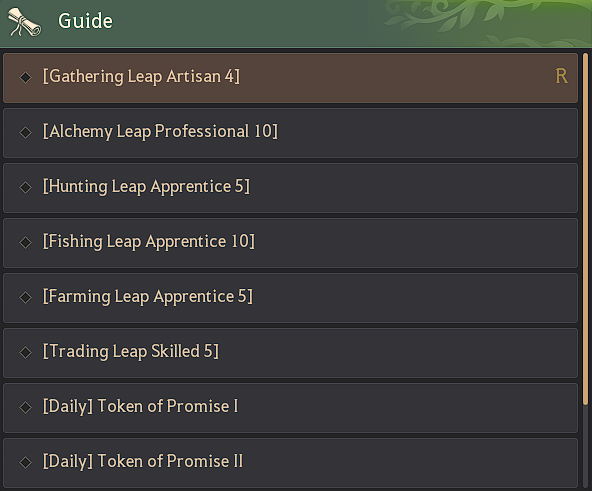 In the bottom left section of the Black Spirit interface you will see an icon that will let you select the appearance of the Black Spirit you prefer. Keep in mind you can only choose between those forms you’ve unlocked, and that this feature is only available after you’ve progressed past a certain point of the main quest. 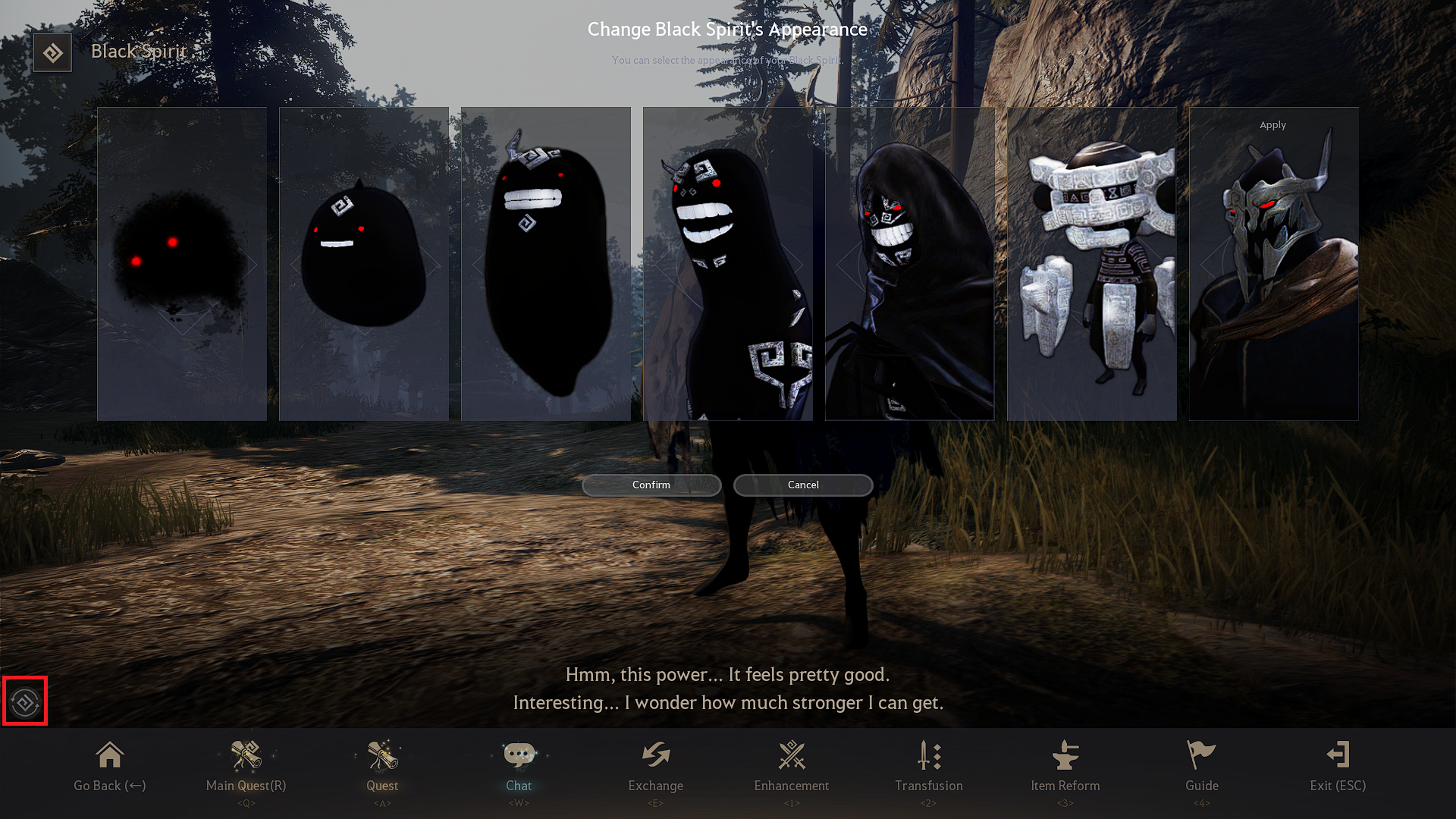 ▲ You can see the icon to open this screen in the bottom left (marked in red in the image).