Did you know Black Desert has “Season Servers?”

Here is a list of frequently asked questions from Adventurers that are new to the Season Servers.

Characters that progressed in season servers can graduate to be played in regular servers.

No, they do not. Like we mentioned above, season characters can graduate. They can graduate by completing the graduation questline or when the season server ends.

The season characters can continue to be used as normal characters when the season server ends.

You can create up to 22 characters in a family and make good use of all of them!
Even though you are free to focus on a single character and have them progress through Black Desert, you could also choose to have a variety of characters and become more efficient by using them to do multiple contents.
With more characters, you could go looking for monsters then switch over immediately to another character to gather materials. You could even be out at sea then switch over to a character to fight Kzarka then get back to sailing.

* Note: The deleted character’s data will be completely deleted from the game.

Naru gear are made to aid you in completing the main questlines from Calpheon to Mediah efficiently.
Completing quests will grant you Beginner Black Stones, which are used to enhance Naru gear. Naru gear also boasts a higher success rate for enhancement than normal gear.

Once you’ve completed the Mediah main questline on a season character, you will be able to take your PEN (V) Naru gear and exchange it for PRI (I) Tuvala gear (of the same armor/weapon type) by talking to Fughar.
Please note that Naru accessories can only be enhanced to TRI (III) enhancement levels, and they cannot be exchanged for Tuvala accessories.

Tuvala gear is ehanced using Time-filled Black Stones looted from defeated monsters in a Season Server. Tuvala gear upgraded to PEN (V) enhancement levels are comparable in power to TET (IV) boss gear. They will help you in your adventures beyond the Season Server.

Once a season comes to a close, you will be able to exchange one of your Tuvala gear pieces with one of the following boss gear! 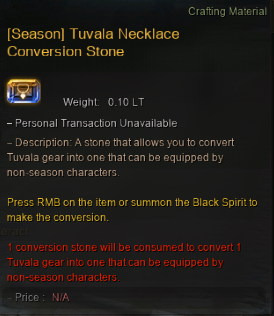 10. I bought gear from the Central Market, but I can’tequip them?

Items which you can be equipped on season characters have the icon displayed below:

The Season Pass offers objectives you must complete in sequence for Season Graduation.
Completing each objective and obtaining its reward will slowly but surely help your character grow into a better adventurer. You can also purchase the “Black Spirit Pass” from the Pearl Shop (F3) to gain access to additional rewards. 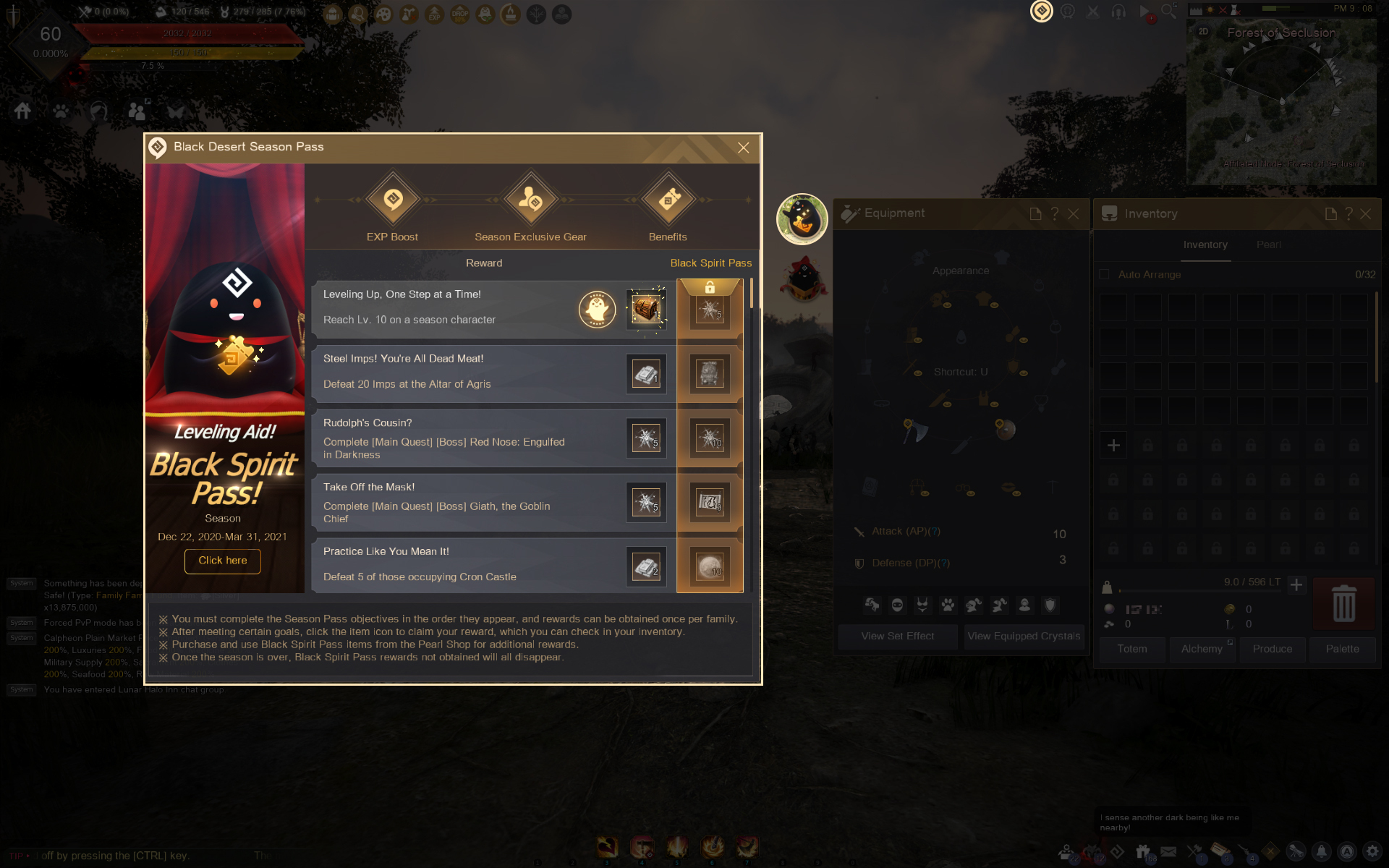 ▲ Click on the Season Pass icon located in your inventory or at the top of the screen!

There are two ways to convert your Season Character to a Normal Character.
First, is to let time do its job. Once a season ends, your character will convert automatically.

Second, is to complete the Season Graduation questline.
Once you graduate, you can no longer play on the Season Servers, so please keep that in mind before you go through with graduation.

We especially recommend you graduate after you’ve enhanced your Tuvala gear to the maximum enhancement levels.
That’s because, it is much harder to acquire items with similar performance to Tuvala gear on normal servers.

So please note, many adventurers enhance all Tuvala gear to PEN (V) before graduating from the Season Servers!

As much as these gears are expensive, getting one by graduating a season character is very efficient.

Additionally, you can exchange the Season Special Gift Exchange Coupon for that particular piece you’ve been needing.

A season character will only get one special gift.
You can even opt for a previous season’s gift if you would like.

So, if you couldn’t get the gear this season, you can make another season character in the future to get it!