How to Obtain Gear through Quests

As a New Adventurers taking your first steps into the world of Black Desert, you might be wondering what kind of gear you should be looking to equip and how to get them so that you can take on stronger monsters.

Fortunately, Black Desert helps Beginner Adventurers to grow with quests offered at opportune moments that reward you with useful gear.

While these quests may not have the best type of gear available,

they will be enough to help you complete the Main Questlines.

Use this guide to discover the various types of gear you can obtain from quests.

And if you feel this gear is better than the gear which you currently have, why not try your hand at completing these quests now?

Naru Gear can be obtained by completing the main quests early on in the game,

and you can get one for each slot, including Main/Sub-weapons, all armor and accessories.

You will also earn plenty of Beginner Black Stones to enhance this gear.

They also have a higher chance for successful enhancement than regular gear,

and are of relatively decent quality when you obtain them in the game.

You can also exchange PEN (V) Naru Gear with either Narchillan Gear,

or, if you’re a Season character, for PRI (I) Tuvala Gear of the same slot.

It is truly a must-have gear for New Adventurers. 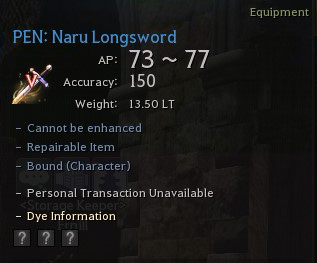 You will continue to obtain Naru gear as you proceed with the Main Questline.

You can also get Naru gear by exchanging Beginner Black Stones with the NPC Fughar, who is found in major capital cities.

Accessories can be enhanced by using accessories of the same type that have not been enhanced. 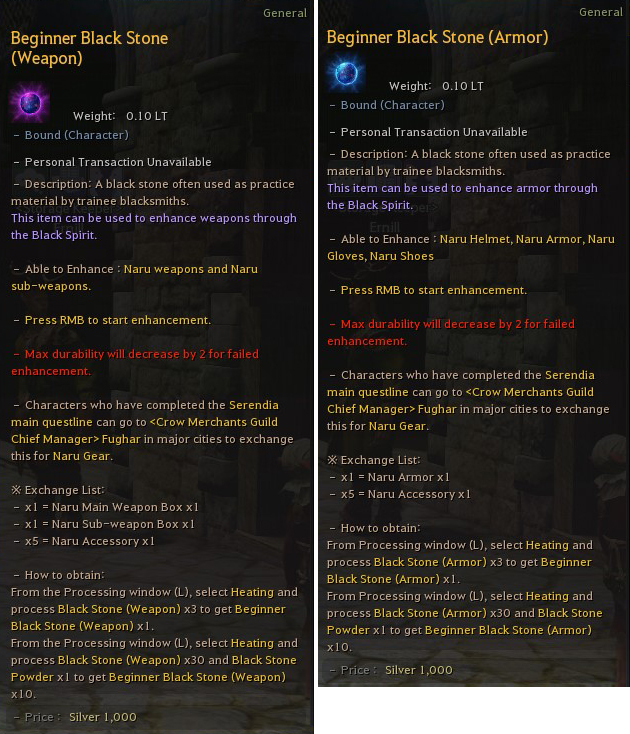 Naru gear is quite useful not only in the early stages of your adventure,

but also for being exchangeable for even higher quality gear.

You can exchange Naru gear for “Narchillan” or “Tuvala” gear. 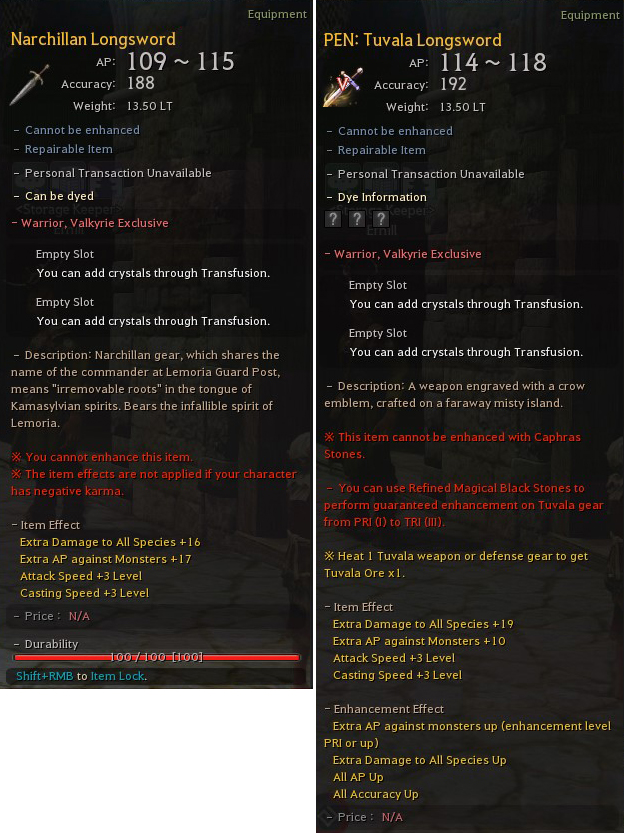 Narchillan gear can be exchanged with PEN (V) Naru gear after accepting a quest available once per Family.

To proceed with this quest, you will either have to had completed the Calpheon Main Questline with a Lv. 50 or higher character, or simply be on character who is Lv. 56 or above.

If you meet all these conditions, you can summon the Black Spirit (Hotkey: , ) and accept the “[Special Aid] Fughar’s Letter” quest. 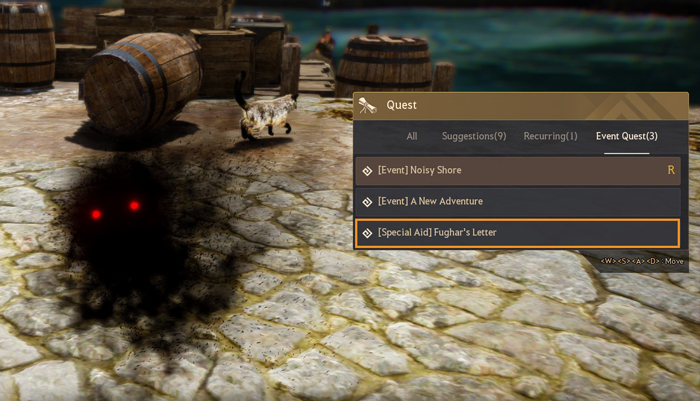 After accepting the quest, try looking for the NPC Fughar, who is located in all major capital cities.

You can talk to Fughar in any town he appears in to continue the quest. 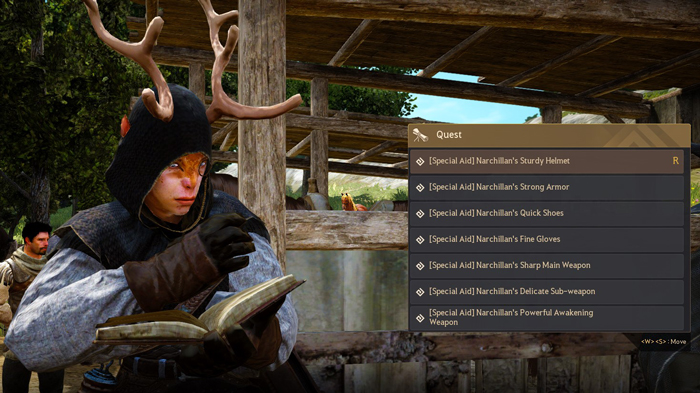 ▲ You can receive Narchillan gear by talking to the NPCs.

If you have a piece of PEN (V) Naru gear and have completed the Mediah Main Questline, you can exchange it by talking to Fughar in any town.

In the process of enhancing Tuvala gear, quite often you’ll be running low on Time-filled Black Stones,

will save you the many Time-filled Black Stones required for enhancing Tuvala gear.

You can get Magical gear from quests available after reaching Lv. 50.

However, this gear isn’t available for new characters created after the Main Questlines were revamped in July 2020, but only for characters who had accepted the quests prior to the revamp.

to ultimately craft the “Roaring Magical Armor” and “Weapon of Sealed Magical Power.”

The quality of the gear obtained is similar to that of PEN(V) Naru gear.

At first glance, you might not be able to see its true value, but being that you can easily obtain it just by leveling up,

there's no need to turn down the chance to increase your power,

especially since Roaring Magical Armor can be used by all characters in your Family and thus is quite useful for when you create a new character. 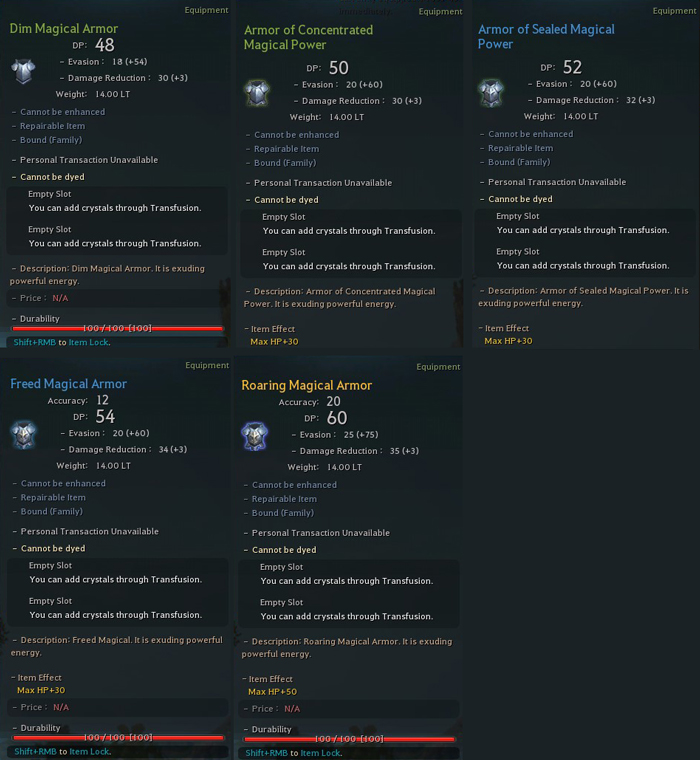 ▲ With each quest completed, the gear becomes stronger.

First complete either “[Boss] Witch-Hunting" or “Looking for Adventurers,”

then complete the quest “While preparing for Mediah..” to obtain “Dim Magical Armor.”
Then, continue proceeding with the questline until you upgrade it to the Roaring Magical Armor.

Upon completing either “[Boss] Witch-Hunting" or “Looking for Adventurers,” available from Lv. 50 or higher, 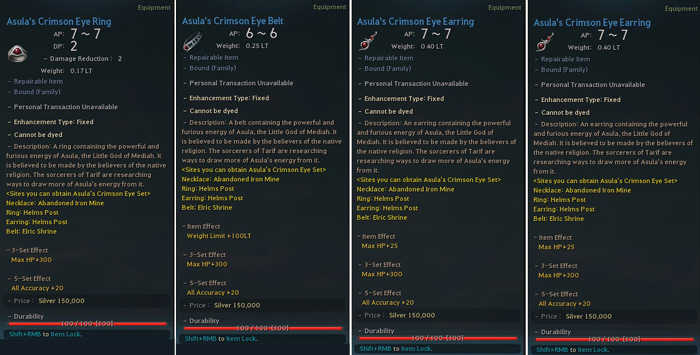 around Helms Post and Abandoned Iron Mine in the Mediah territory.

Asula’s Crimson Eye accessories are quite powerful in the early to mid-stages of the game.

▲ Asula’s Weakened Magic accessories can be used for either enhancements or be exchanged for other accessories.
Where to Obtain Asula’s Crimson Eye Accessories
Subjugation Missions to Obtain Enhanced Asula’s Accessories

There are 4 types of Subjugation missions

that will automatically proceed once you enter a specific monster zone with the appropriate level requirement.

▲ Enter the monster zone to start the Subjugation quest!

You can get accessories as a reward for completing quests.

There are 4 types - the Red Sand Crystal Ring, Forest’s Eye Earring, Rock Heart Belt, and the Tears of the Wind Necklace.

You can get these by completing the Main Questlines of Valencia, Kamasylvia, Drieghan, and O’dyllita, respectively.

Not only are these accessories quite decent for New Adventurers,

but you can also enhance them up to TRI (III) grade. Should enhancement fail, the accessory will only lose durability rather than being completely destroyed.

Characters from the same Family can equip these accessories without any limitations.

They can also helpful for strengthening newly created characters. 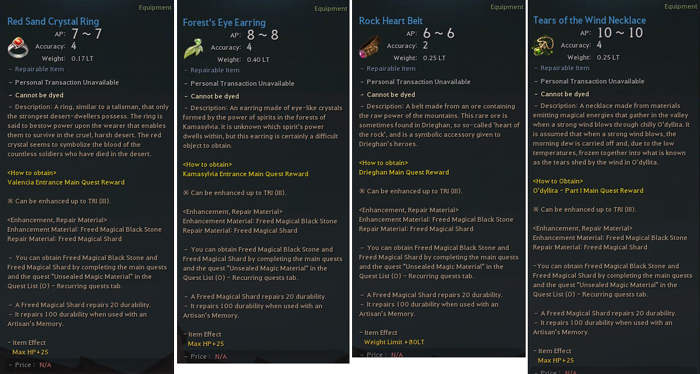 ▲ Accessories you can get from quests. You can enhance them until TRI (III) grade.

Complete the quests above once per character to be rewarded with an accessory.

If you find a quest difficult to complete, you can always get the help of a friend or your fellow guild members.

You can enhance these accessories with “Freed Magical Black Stones,”

and if your enhancement fails, the accessory will not be destroyed, but it will lose durability.

However, you can restore their durability by using “Freed Magical Shards”.

However, if you find yourself running low, more can be obtained by completing Recurring and Daily Quests. 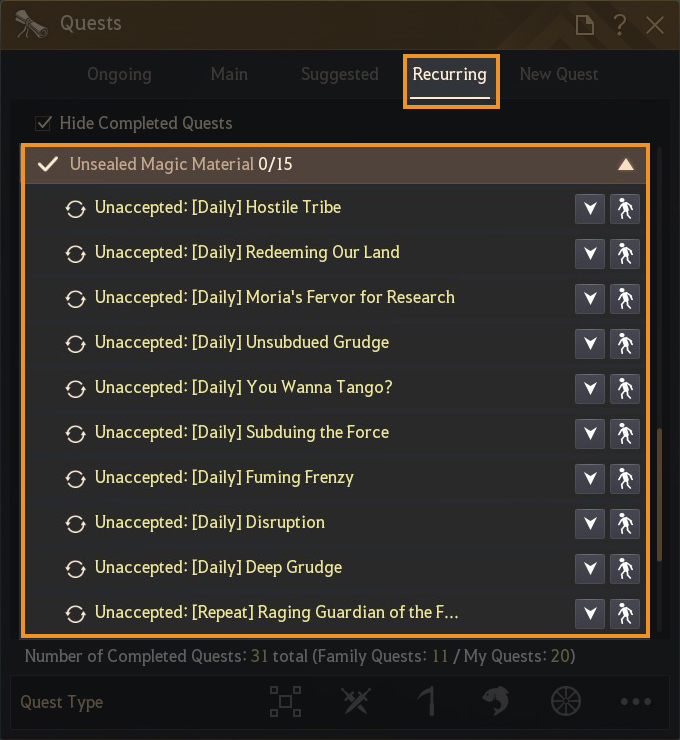 If you are a New Adventurer, we recommend you try obtaining Cliff’s Weapon, which is rewarded after completing the Calpheon Main Questline.

If you then enhance Cliff’s Weapon, you’ll be able to exchange it with the NPC <Blacksmith> Miguel Aries to obtain a vast amount of silver.

Request to Update Adventurer's Guide
How to Obtain Gear through Quests