- You can convert your season character to a normal character via graduation on a season server and have the restrictions on equipping gear lifted.

- You can either proceed with graduation on a season server yourself or automatically graduate once the Season ends.

- You can proceed with graduation yourself after a certain period of time has passed once the season server opens. (Fughar’s Timepiece and Season Pass completion)

- After graduating from a season server, you can take on quests for guaranteed PEN (V) accessories and PEN (V) Boss gear as well gaining access to the Progression Pass.

What is Season Graduation?

You can convert your season character to a normal character via “graduation” or automatically at the end of a season.

You can progress further with no restrictions on equipping normal gear or mounting Dream Horses, although you can no longer log into a season server with your now normal character.

You can convert your season character to a normal character quickly while a Season is still ongoing via the “graduation” system.

Graduation is available after a certain period of time passes after the opening of season servers. Please be careful in your decision since you cannot create a season character again nor log into a season server after graduation.

You cannot have Fughar’s Timepiece in your possession and must have received the Season Pass rewards after completing all objectives in order to graduate.

▲ You must not have Fughar’s Timepiece in your possession and must have accepted the Season Pass rewards after completing all objectives in order to graduate.

You cannot graduate if you have “Fughar’s Timepiece,” used to convert your season character, in your possession. You must either use the item or throw it away from your Inventory to proceed with graduation.
It is recommended that you graduate after using Fughar’s Timepiece, if possible.

Once you’ve completed all the requirements, you can accept and complete the [Season Server Graduation] At the Crossroad quest from the NPC, Leyla in Velia.

You can accept and complete the “[Season Server Graduation] Into the Big Wide World” consecutive quests via Fughar once you’ve completed the quest mentioned above.

You can transfer to a normal server and use the Honorable Adventurer's Certificate to complete the quest.

Your season character will be converted into a normal character upon using the Honorable Adventurer’s Certificate, and your graduation will be complete.

Please be careful not to convert low enhancement level gear if you have multiples of the same pieces of gear.


Conversion with the End of the Season Server

Once a Season ends, season characters will automatically be converted into normal characters.

It is recommended that you use or sell “Tuvala Ores”, “Time-filled Black Stones”, “Refined Magical Black Stones”, consumable items including other materials and items relevant to the season server, and gift boxes for leveling up before the Season Server ends since they will all be removed.

Once your character is converted, you will get a notice on converting Tuvala gear and rewards including the “Gift Box Full of Memories” in your mail.

You can receive season special gifts and season graduation gifts if you played on the season server.

You can receive rewards by completing the Season Special Gift quest that you can accept once you’ve reached Lv. 20 on a season character.

The quest will be added after a certain period once the Season Servers are open. You can check out the details on the notice that will be updated when the Season Special Gift quest is added.

However, you cannot accept season special rewards that you received previously.

[Special Gifts You Can Select From]

You can only accept the rewards for each Season once. 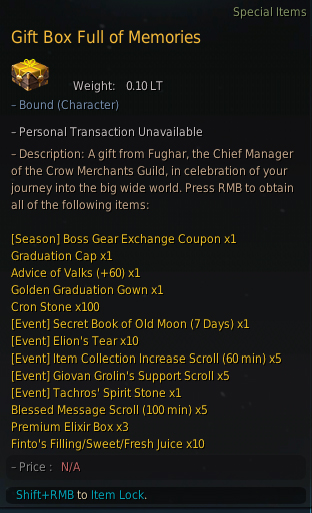 You can receive the “Gift Box Full of Memories” after graduation or once the Season ends via a quest or mail.

You can obtain many useful items from the Gift Box Full of Memories.

Contents of the Gift Box Full of Memories

You can enjoy Black Desert in your own unique way by exploring the diverse regions within Black Desert, go for stronger monsters, or work on life skills once you’ve graduated from the season server.

It is recommended that you try the quests for guaranteed PEN (V) accessories and guaranteed PEN (V) Boss gear if you wish to become stronger.  You can learn about each type of content and receive rewards via the “Progression Pass” if you want to experience a variety of content in Black Desert such as Hunting, Cooking, Gathering, etc.

You can take on daily quests to work towards a PEN (V) accessory of end-game quality at a guaranteed success rate.

You can use your PEN (V) Tuvala gear obtained from the season server to upgrade it to PEN (V) boss gear, the ultimate end-game goal, via reform stones at a guaranteed success rate.

It’s a system to guide you through a variety of content in Black Desert and receive rewards.

). (You cannot work through the Progression Pass with a season character.) 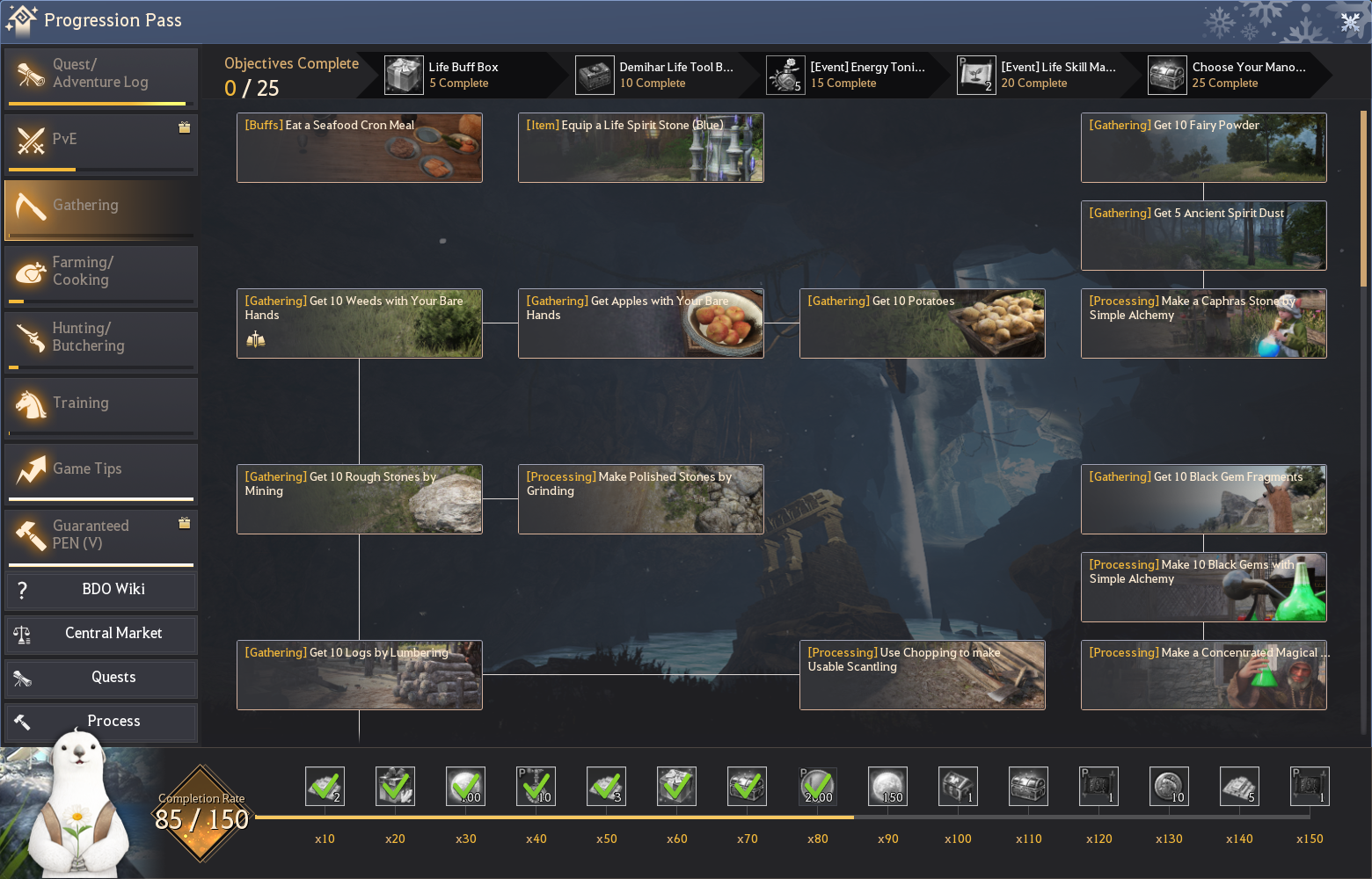