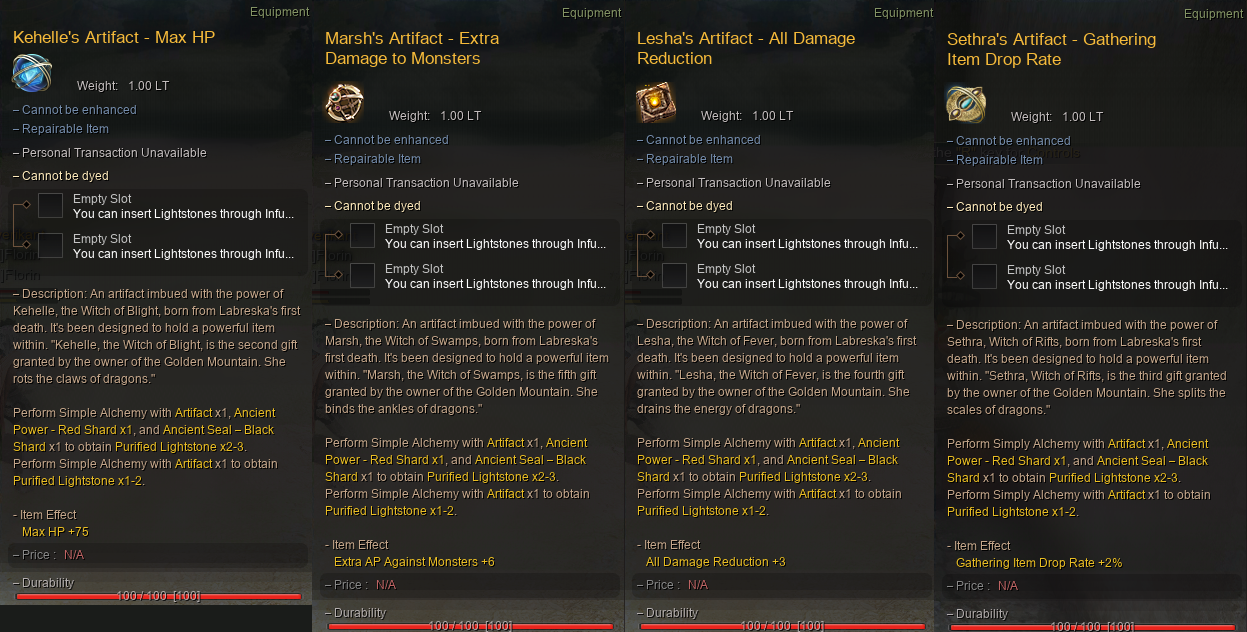 ▲ There are many kinds of artifacts with a variety of effects.

An artifact is a type of item that can be equipped by your character. It has its own effects and two slots where lightstones can be infused.

A lightstone is an item that can be infused into an artifact for additional effects. 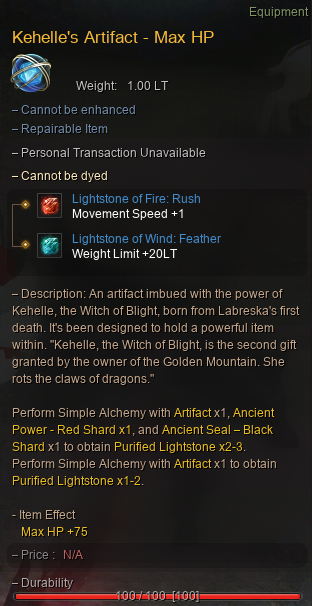 ▲ You can get additional effects by infusing lightstones into an artifact.

There are many different kinds of artifacts such as Lesha’s Artifact and Kehelle’s Artifact. Artifacts of the same kind may have different item effects. When the combination of lightstones infused into an equipped artifact meets a certain condition, you’ll get additional lightstone combination effects.

If the character you copied an artifact over to dies with negative karma, the copied artifact can get destroyed.

You can obtain each artifact via the following methods:

You can also view this information via Menu (ESC) -> Adventure (F5) -> Item Drop.

You cannot purchase or sell artifacts via the Central Market.

How to Re-use Artifacts

If you don’t need the artifacts you obtained, you can convert them into “Purified Lightstones,” which you can use to obtain Lightstones.

<How to Convert an Artifact → Purified Lightstone>

You can use the item copy function on artifacts. When copying an artifact, any infused lightstones will be copied as well. The rules for copying defense gear are applied to artifacts. There will be no costs for copying the items.

If you remove or replace the lightstones infused on any artifact after copying it, it does not affect the copy held by the other character. 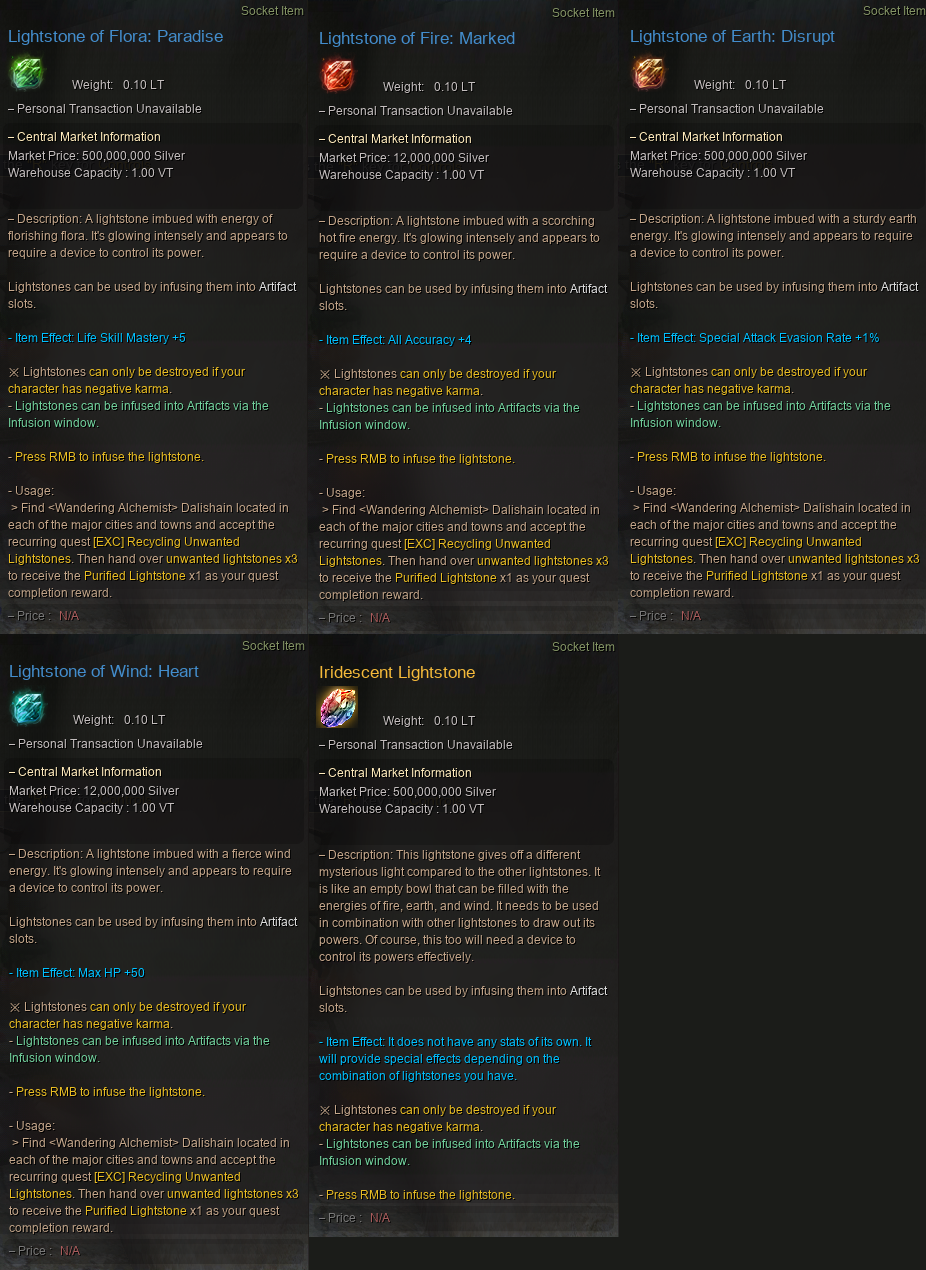 Once the combination of the lightstones infused into your equipped artifacts meet a certain condition, you can additionally get lightstone combination effects.

Lightstones can be sorted into 4 main categories.

- Lightstone of Flora: life skill type (To be updated at a later date)

Lightstones infused on artifacts can get destroyed when your character dies with negative karma.

You can hand over three unwanted lightstones for a “Purified Lightstone” via a quest you can accept from the Wandering Alchemist, Dalishain. She is in each of the major cities and towns. 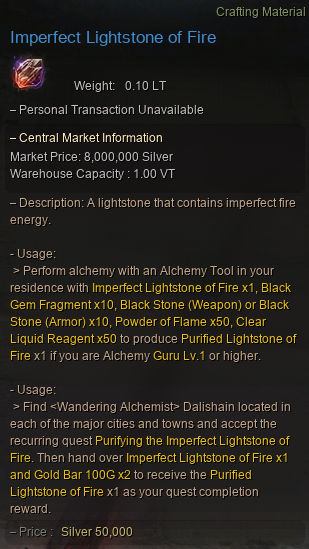 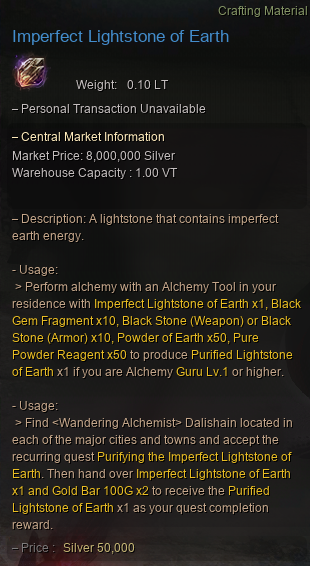 Imperfect Lightstones can be purified via Alchemy or an Alchemist and used to obtain Lightstones. You can obtain them via defeating monsters, Dark Rifts, World Bosses, Boss Summon Scrolls, guild raids, etc.

How to Convert an Imperfect Lightstone → Purified Lightstone

You can use an Alchemy Tool in your residence to perform Alchemy with the following alchemical formulas if you are an Alchemy Guru Lv. 1 or higher.

* You can additionally get a lightstone of any element at a low probability when you convert an Imperfect Lightstone into a Purified Lightstone.

* The quests become available once you complete the “Eureka! A New Discovery” quest from Dalishain.

How to Obtain Imperfect Lightstones

Depending on the monster zone, the probability of looting lightstones of a certain element may be higher than other monster zones.

* Imperfect Lightstones cannot be obtained in monster zones nor from content that are not listed above.

You can obtain Iridescent Lightstones from the following content:

[How/Where to Get Iridescent Lightstones]

You can obtain Imperfect Lightstones of Flora, that you can use to get Life Skill lightstones, via Life Skill activities and “Golden Seal - [Work Supervisor]” Exchange (10,000). However, you cannot obtain them from Barehanded Gathering, Water Scooping, nor Shoveling.

You can purchase and sell Imperfect Lightstones and Purified Lightstones via the Central Market. 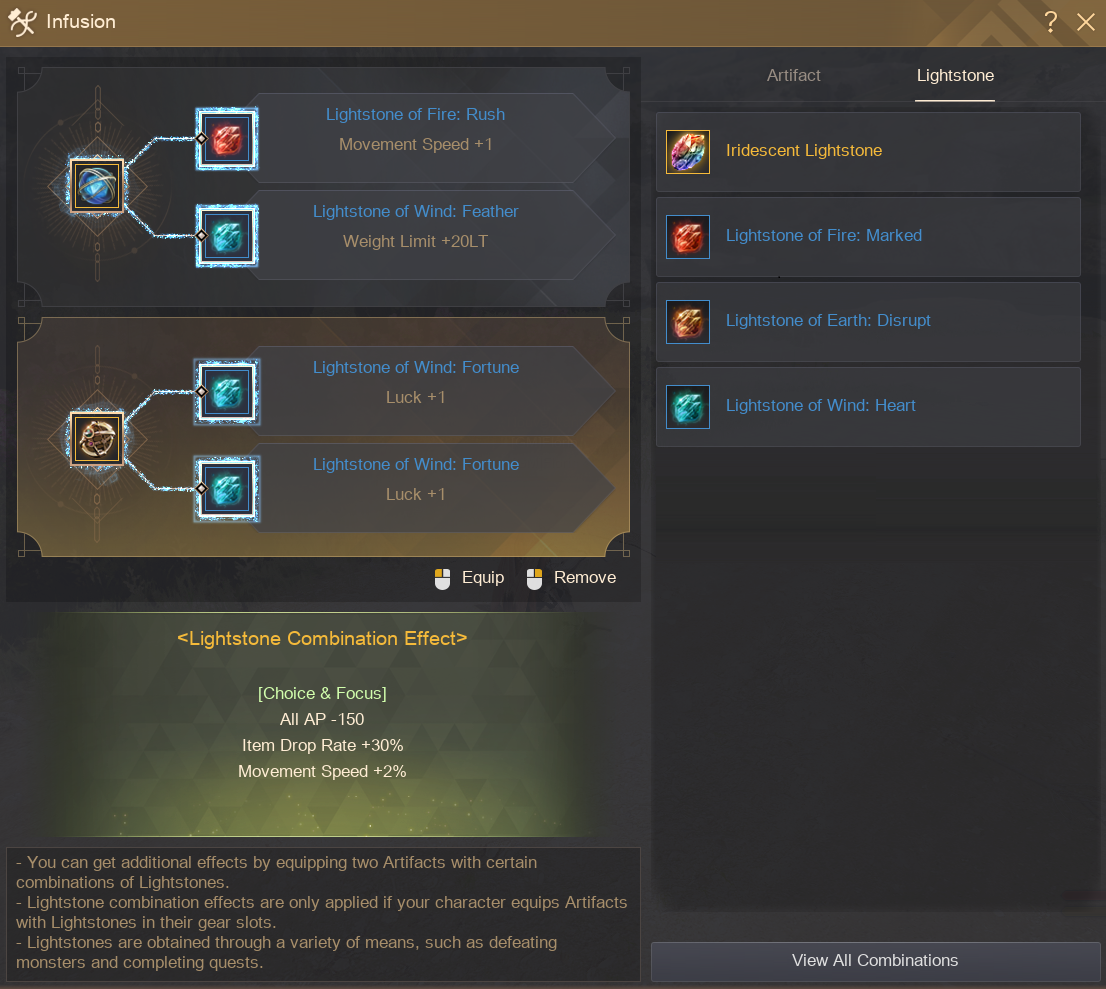 You can open the Infusion (lightstone) menu via Menu (ESC) -> Character (F2) -> Infusion or by right-clicking on a lightstone. From the Infusion menu, select an artifact, then choose the lightstone you want to infuse into one of the artifact's available slots. 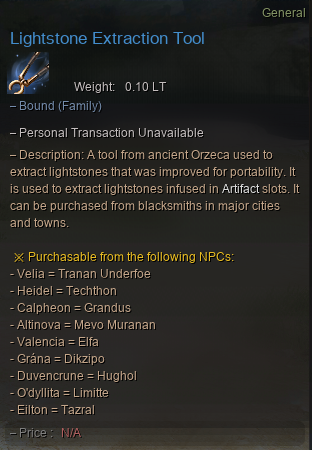 ▲ You can purchase tools for extraction from a Blacksmith and use the “Extract Lightstone” feature.

You can use the “Extract” option via a Blacksmith to extract lightstones infused in artifacts. Blacksmiths sell lightstone extraction tools needed for extraction for ten million Silver.

▲ Right-click on the Infusion (lightstone) menu to remove the lightstone.

Select the artifact and right-click the lightstone you want to remove from the Infusion (lightstone) menu.

Removed lightstones will be destroyed and cannot be restored.

Item effects will be applied immediately after equipping an artifact. You will additionally get effects from the lightstone infused into the artifact you equip.

Each character can equip up to two artifacts.

* You can check out the melee / ranged / magic combat type via My Information (P) -> Battle Stats -> Combat Type. (Regardless of Succession/Awakening)