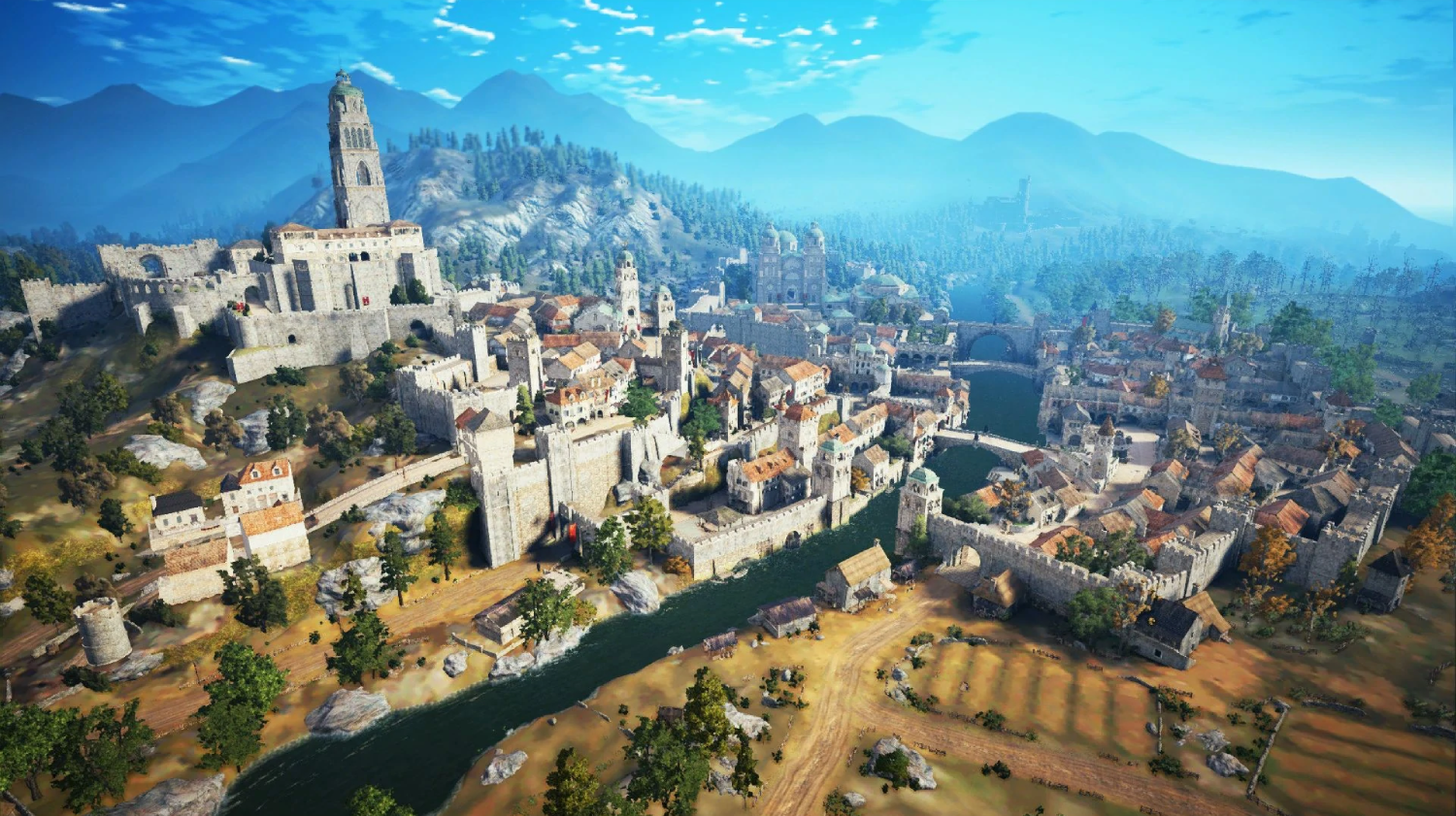 The black death pandemic, which originated from the merchants that traveled back and forth from the desert, resulted in high mortality rate wiping out more than half the population in the western continent including Calpheon, Keplan, Heidel, and Olvia.
Anyone affected by the outbreak saw their skin turn black. Everyone kept their distant to ensure that they don't contract the deadly illness. Those thought to have been affected by the disease were forced to leave the castle.

There was no exception. Even the nobles and the priests were forced to abandon their children. Those that lived outside the castle walls met a horrendous death. Their lifeless bodies were burned to prevent the spread of the disease. The pandemic that shook humanity to its core simply disappeared without a trace one day, but not before indiscriminately afflicting both nobles and commoners alike. This led the commoners to think they may actually be no different than the nobles. They prayed day and night in hopes of stopping this dreadful calamity, but Elion did not answer their prayers.
The nobles that survived the calamity urgently called for other nobles to preserve their hierarchy in Calpheon. Elionian priests began spreading the lie that the Valencians were the heathens brought this disaster upon everyone, and that they used the black crystal within alchemy for these nefarious purposes. The kings added that the Black Desert must be conquered in order to stop any further catastrophe.

They made this promise to the lower class, who were starting to realize the value of the labor that they had been doing for free up until that point. An alliance was soon established, and this is how the long, bloody war between Calpheon and Valencia first started.

Dead bodies of the Valencians on the road seemed proof enough that disaster had swept across the land. Priests were ridiculed for their accusations and the reputation of the Elionian church began to crumble. But war was all the justification needed for revenge. Repeated expeditions have damaged Mediah. Mediah is located in the middle of the continent, accumulated wealth by providing supplies to the alliance. Swords and shields gave way to guns and cannons, increasing profit alongside the massive quarries that were then established. Knowledge was power.

Black crystals were needed to endure the harsh desert night. The alliance brought back massive amounts of black crystals every expedition, as if trying to rid the Black Desert of them completely. Mediah welcomed this. They informed the alliance that they needed black crystals to melt down and make gunpowder. This satisfied Calpheon, as they were able to cover some of their expenses of the expedition by supplying black crystals. Neither Valencia nor Calpheon knew the true value of those black crystals. While black crystals were being piled up, walled cities were being built in Mediah. Imur Nesser, the King of Valencia, became well-known during that time. First described as a devil who brought disaster, he later became known for mocking the alliance among the people, as Calpheon never once stepped foot in Valencia castle despite the many rebellions that occurred. The war raged on for 30 years until the last expedition, when the sand storm buried Calpheon's King Dahad and his forces beneath the sands of the great Black Desert.

The sandstorm kicked up again, having already wiped out the desert towns, while the tsunamis devoured all the ships anchored in the port towns. Highland earth was swept away by torrential rain, and typhoons transformed the map. In tropical areas beyond the deserts, severe droughts cracked the land. The Black Death had changed people, but natural disasters reshaped the world. The Fogans drove out the Naga and claimed the swamps as their territory.

The Orcs and Ogres migrated en masse in search of lands to settle. Groups of barbarians settled down in Southern Mediah, where they easily plundered anything they could reach, thanks to Mediah's crumbling kingdom. The chaos that ensued worldwide worsened survivors' already abysmal situation. Perhaps there would've been a better outcome if the people and barbarians understood each respective languages, but without this possibility, any hope of establishing a truce or sending an expedition into the country disappeared once the barbarians and people came into contact with each other.

Mediah served as a vital crossroad that allowed Keplan, Heidel and Oliva to trade with Valencia. As resources dwindled due to the ongoing war, there was no other option but to trade with Valencia. Calpheon eventually yielded to the proposals of the Elionin priests and allowed trading. Mediah drastically changed 10 years after the war. The barbarians occupied southern Mediah, and mysterious occupants in the strongholds in northern areas of Mediah were armed with cannons and rifles, looming over the merchants. Still, Mediah bustled with life and billows of smoke from happy homes stretched as far as eyes can see. One day, merchants of Calpheon started moving about the land, but nobody in Mediah knew why,
for the answer lied in the sands of the Black Desert. The Valencian soldiers were deployed in the area, indicating that they were guarding something of high value or of great power.
Despite this effort, Calpheon alchemists managed to get their hands on the black crystal. This would explain why the weapons crafted in Mediah became stronger. The magical crystals the priests spoke of were true after all. Eventually, the real worth of these magical stones spread all across Keplan, Heidel and Olvia.

Each country began their own search for the black crystals. Although Keplan was the first to discover the black crystals at the Rocky Mountain, they also found many with impurities. Mediah actually purchased a large number of these because of its superior composition quality and higher resistance to heat. However, Valencia eventually imposed trade restrictions on black crystals, forcing Mediah to search for alternatives.
Black crystals were discovered in Serendia soon after--relatively small pebbles in the hands of the Naga. Mediah merchants traveled from afar to verify the purity of these pebbles. Calpheon grew restless and anxious with each passing day. They searched every inch of the kingdom, but to no avail. Calpheon feared that they would lose their influence without the black crystal and be relegated to a middle power. To prevent this, Calpheon turned their attention to the black crystals in Serendia. The citizens of Calpheon were exhausted from war and the frequent calamities that swept across the land. The leaders of Calpheon knew they would need a large fund in order to field a sizable, well equipped military.
The young Calpheon king Guy Seric persuaded the Elonian Priests to fund the war as it’ll bring glory to Elion. In addition, Guy Seric promised to dispatch soldiers to aid the Calpheon merchants so that they can compete against the Serendian merchants. This war of greed followed shortly after.

Calpheon launched its Road to Serendia campaign and Keplan was the first city to incur its wrath. Now well-known figures such as Cliff and Armstrong took part in the great war in Heidel. Nobody was able to challenge the two generals that were deployed at Serendia watchtower. The Calpheon king, Guy Seric, sent 300 of his finest soldiers to Balenos. Heidel Castle was situated between the river that separated Balenos and Serendia. Calpheon soldiers used light, swift boats to quickly navigate through the river and launched a surprise attack on the unsuspecting Heidel soldiers. Upon receiving word on the surprise attack, Cliff and his soldiers rushed to repel the invaders, but by the time they reached the castle it had already been set ablaze. Guy Seric was not there.

The flames engulfing Heidel Castle was only the start of Calpheon’s attack. Calpheon had secured an early advantage by capturing Crucio, the king of Heidel. Guy Seric sent an emissary to Cliff with the promise that King Crucio would be released from captivity if three conditions were met. First, soldiers could not be deployed in large groups near the watchtower. Second, Serendia must concede its economic freedom to Calpheon. Finally, Serendia was to surrender all current and future black crystals to Calpheon.

King Crucio returned to Heidel after a year had passed. The war ended before it had even started. Olvia surrendered and was under direct control of Calpheon. Calpheon seized control of the mines in Keplan and constructed an extraction mill in Serendia to extract black crystals. Guy Seric was not satisfied with the current surplus and set his eyes to the Black Desert. Guy Seric was convinced no other powers would challenge Calpheon if it seized control of the Black Desert.

However, Guy Seric’s plan of dominance would only work with proper alliances. Guy Seric knew Heidel would not challenge Mediah and that the citizens of Heidel would not yield to his wishes. As a result, Guy Seric employed a large number of mercenaries and raised taxes to fund the war effort. This unpopular move caused an uproar among the common citizens. Due to growing backlash, Guy Seric had no choice but to request aid from the Church of Elion. The soldiers who were originally dispatched to the merchants returned to the king as well.

The king's ambitions wound up being nothing more than a mere dream. The fuedal system collapsed and commoners were now able to freely participate in various economic activities, opening an era of commerce and trading. Nobles, priests and commoners alike no longer based their actions on the king's decision. Reforms were made to the existing governmental system, and a council was established, with representatives from all classes taking part.