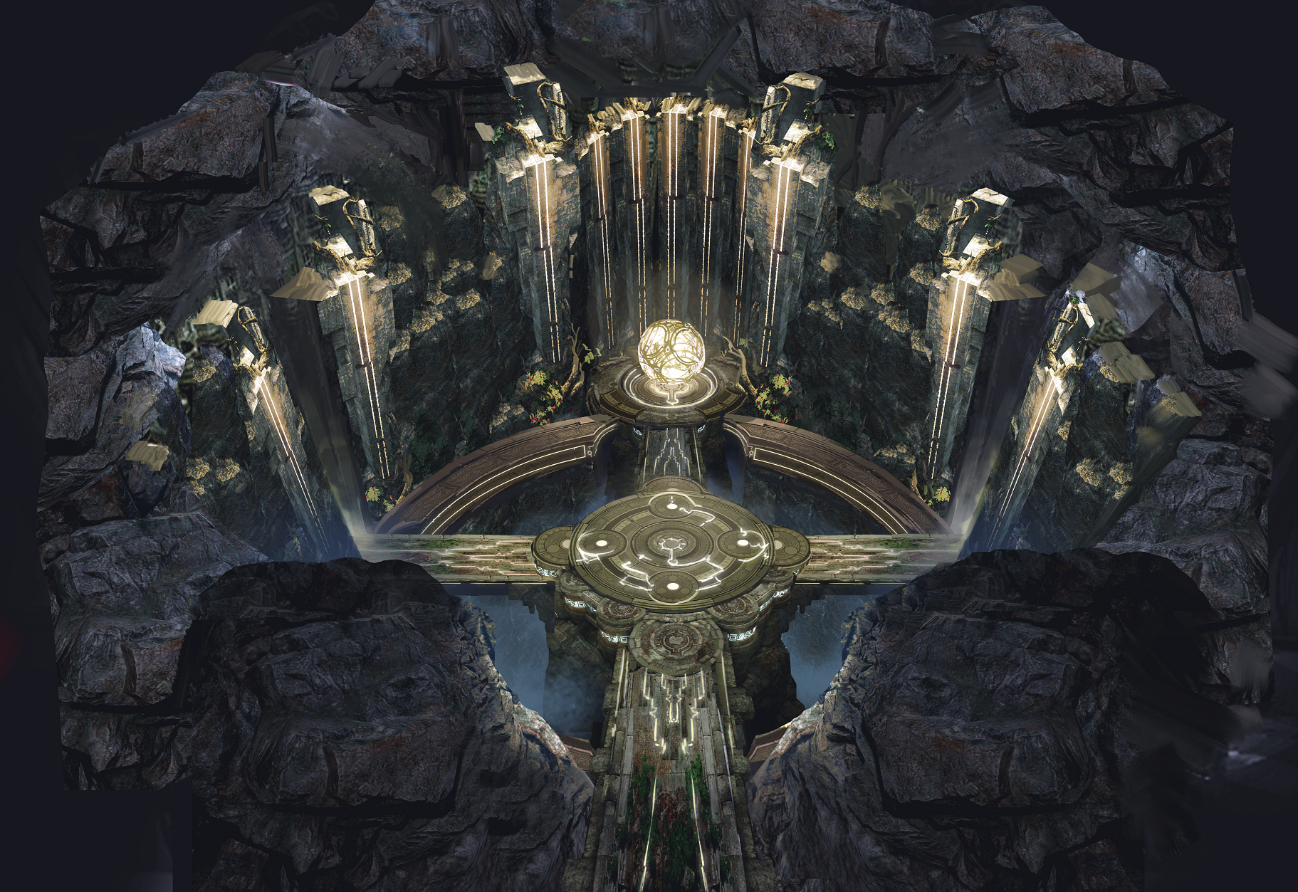 Atoraxxion: Vahmalkea is a co-op dungeon and is the first biome you can visit in Atoraxxion.
Vahmalkea is separated into Vaha’s Query, Vaha’s Sky, Vaha’s Storm, Vaha’s Heart, Vaha’s Head, Vaha’s Garden, and Vaha’s Cradle.
You can enter Vahmalkea by going to the Sol Magia in the Ancient Stone Chamber. The difficulty of the dungeon is determined by your server: season, normal, or Elvia.
Once you make it to Vaha’s Cradle, the final area, defeat the final boss, Apex Urukios, to receive rewards. (Reward are only available once a week per character / twice a week per Family)

The difficulty of Atoraxxion: Vahamalkea is separated into season, normal, and Elvia difficulties.

The appropriate difficulty level and rewards will be applied based on the server you're logged into. (Example: Season difficulty is applied when you enter Vahamalkea on a season server)

The difficulty will be scaled according to the season character’s gear score and there is no death penalty. 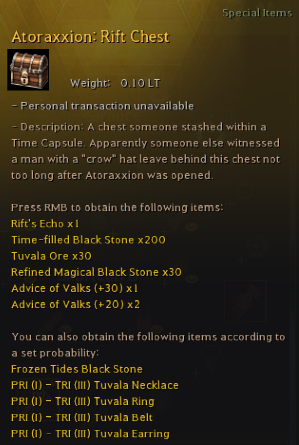 Normal difficulty is applied and there is no death penalty. (Reward - Vahmalkea: Aakmah Chest) 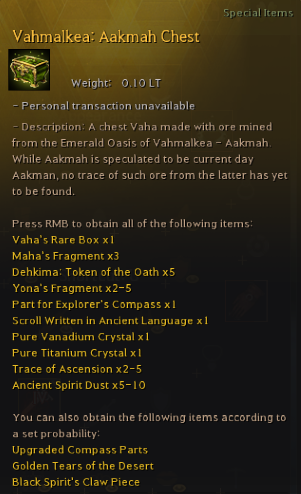 A death penalty will be applied to all areas upon death except for in the final area, Vaha’s Cradle.
The Elvia difficulty will offer different rewards depending on whether it was your first or second playthrough that week. 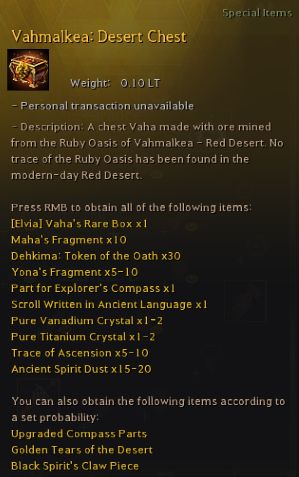 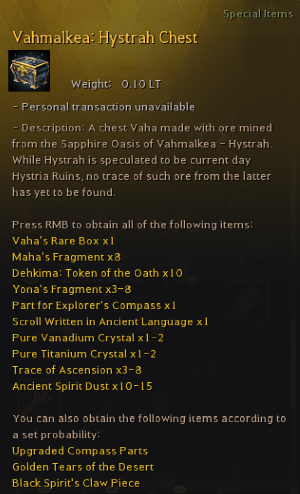 Limits on Obtaining Weekly Rewards
- You can obtain weekly rewards only a given number of times in Atoraxxion.
- Each Family can obtain rewards twice a week and the limit will reset Thursday after midnight.
- However, after your second playthrough, you must play with a character that has not accepted the weekly quest yet in order to accept the quest and receive rewards in Atoraxxion.

Season rewards earned are not affected by the weekly limit mentioned above.

- Available from Lv. 60.
- Complete [Invitation from I] from the Black Spirit’s Main Quest tab
- Complete your character’s Awakening or Succession quest
While you’re progressing through the quest [5-person Co-op] The Last Stronghold, Atoraxxion, you can interact with the Sol Magia located in the Ancient Stone Chamber to enter Atoraxxion: Vahamalkea.
TIP: If you have a character that completed [Atoraxxion] Vaha’s Time Capsule from the Black Spirit’s Main Quest tab, you can enter as long as you are above Lv. 57. 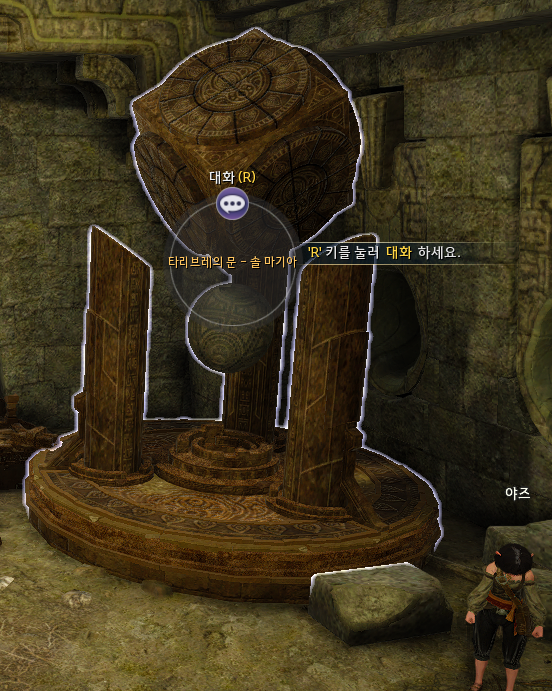 ▲ The Sol Magia in all its splendor inside the Ancient Stone Chamber. (Atoraxxion Entrance)
If you meet the entrance requirements, you can enter by choosing Vahmalkea from the Atoraxxion selection screen after interacting with the Sol Magia. 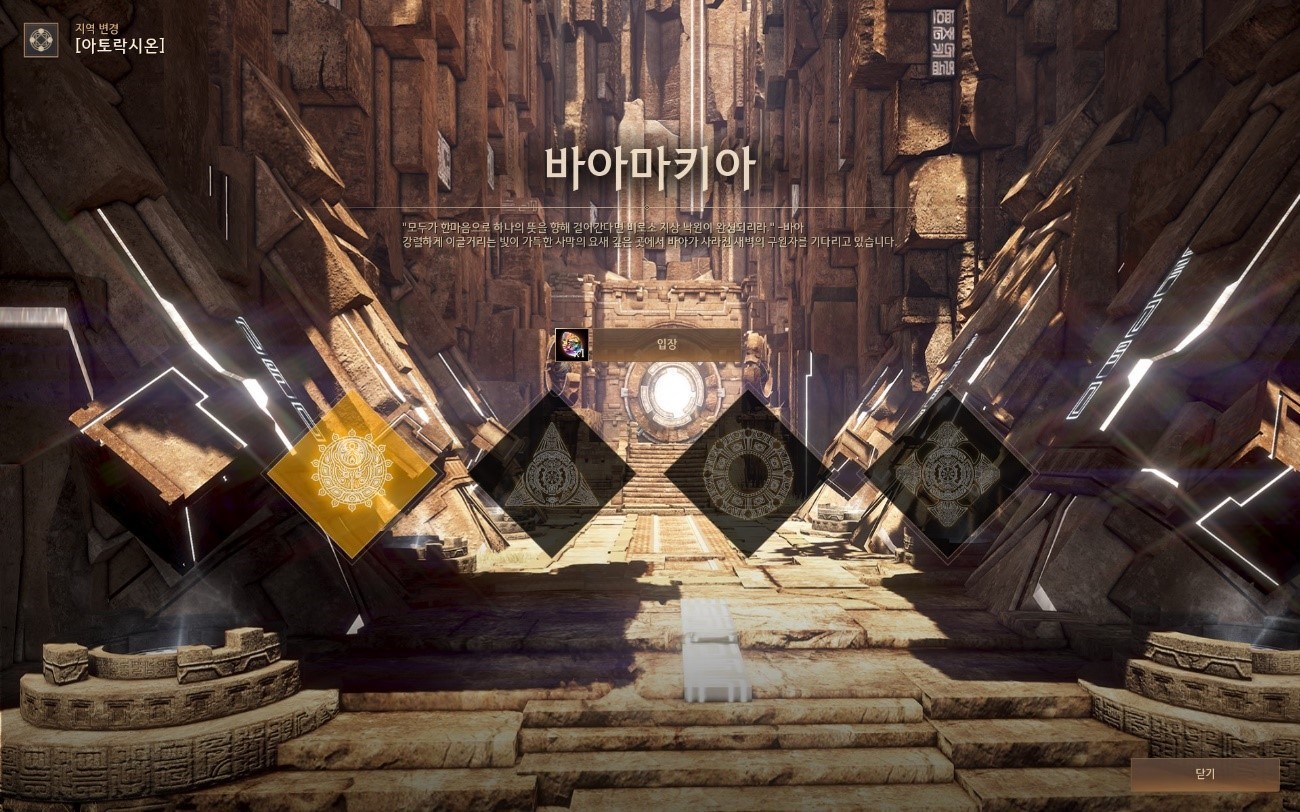 TIP: You cannot use your Maid and Butler when you are inside Atoraxxion. We recommend that you finish all preparations before you enter. (Repair and Potions can be purchased inside)

Vahmalkea is composed of Vaha’s Query, Vaha’s Sky, Vaha’s Storm, Vaha’s Heart, Vaha’s Head, Vaha’s Garden, and Vaha’s Cradle.
You need a key in order to progress from area to the next. The key can be crafted by using materials that are dropped in Atoraxxion.
TIP: The Item Drop Rate Increase Scroll effect is applied in Vahmalkea.
You can solve threads, which are like puzzles, alone or together with party members when you are inside Atoraxxion.
TIP: You can still progress to the next area if you choose not to solve the threads.
You can leave Atoraxxion by interacting with the Sol Magia located inside the dungeon.

4. All party members must craft Lucretia Dagger from Sol Magia in Vaha’s Garden and then move to Vaha’s Cradle.

6. Claim your reward in Vaha’s Paradise 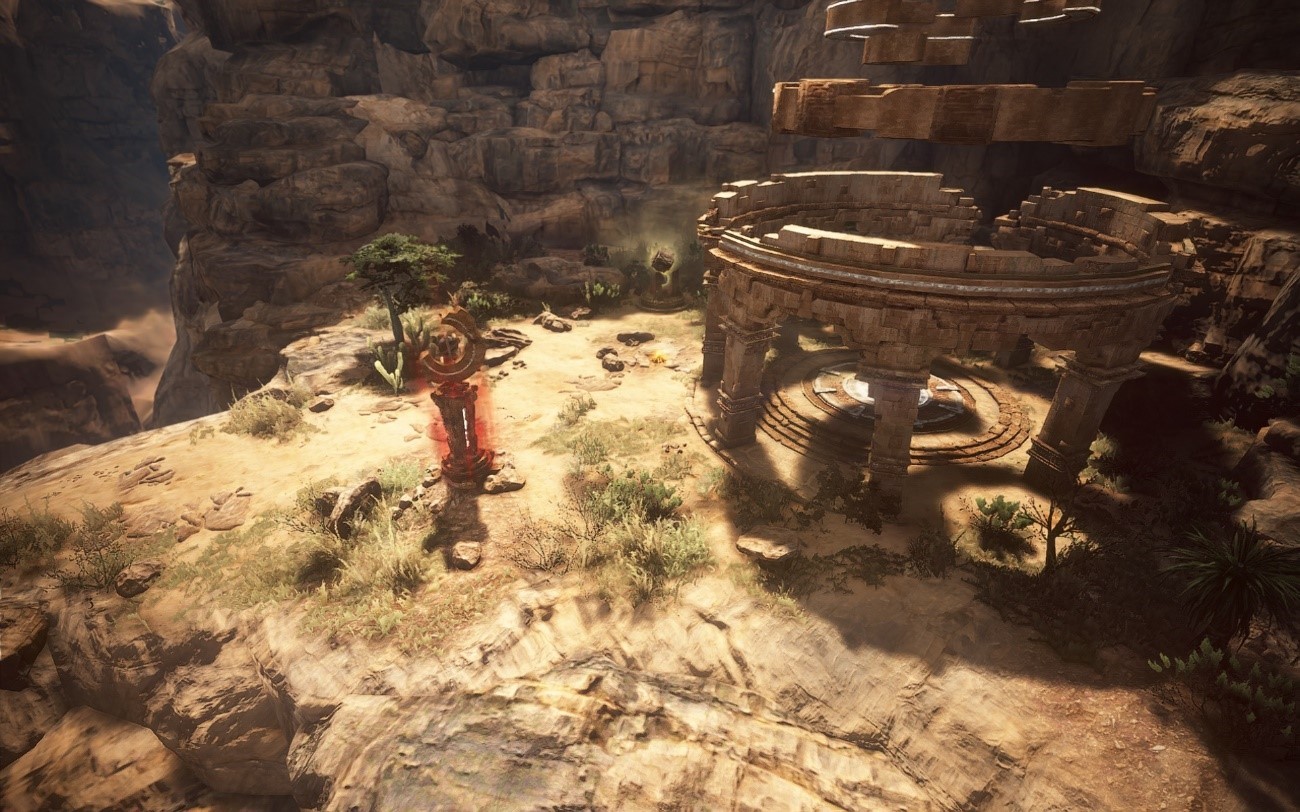 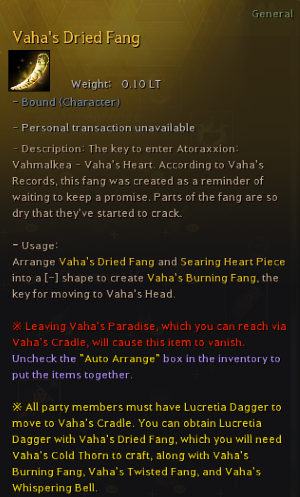 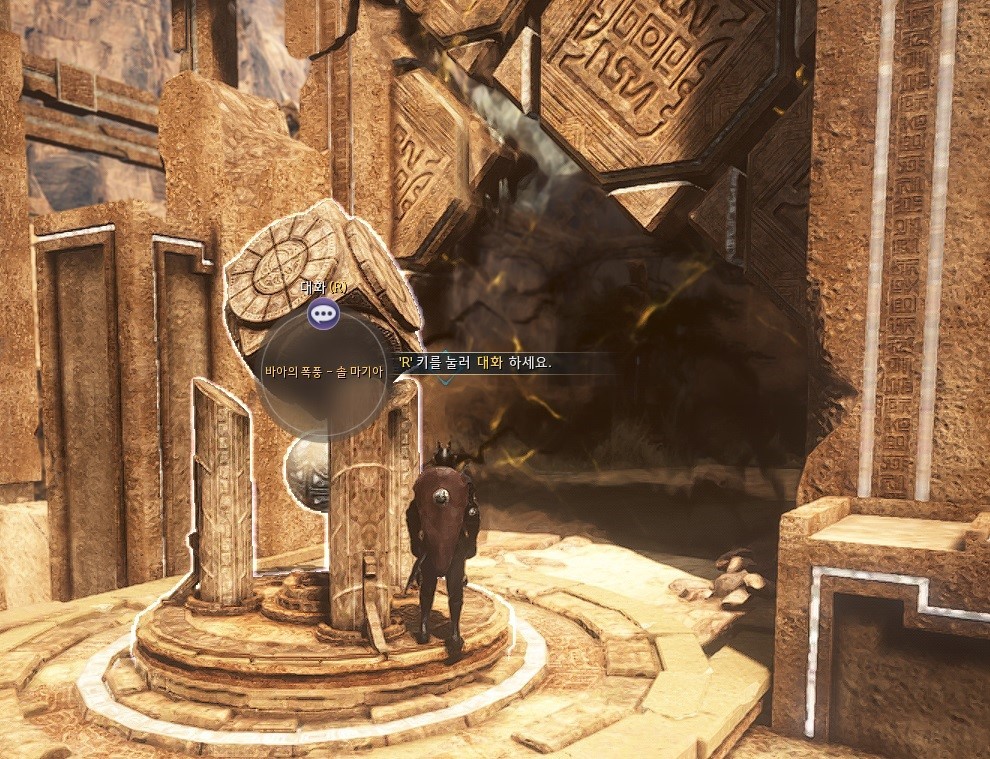 ▲ When you have Vaha’s Dried Fang, you can interact with Vaha's Storm - Sol Magia to move to the next area.
TIP: All party members must create a key in order to enter the final area. Vaha’s Cold Thorn can be obtained in Vaha’s Heart as well. 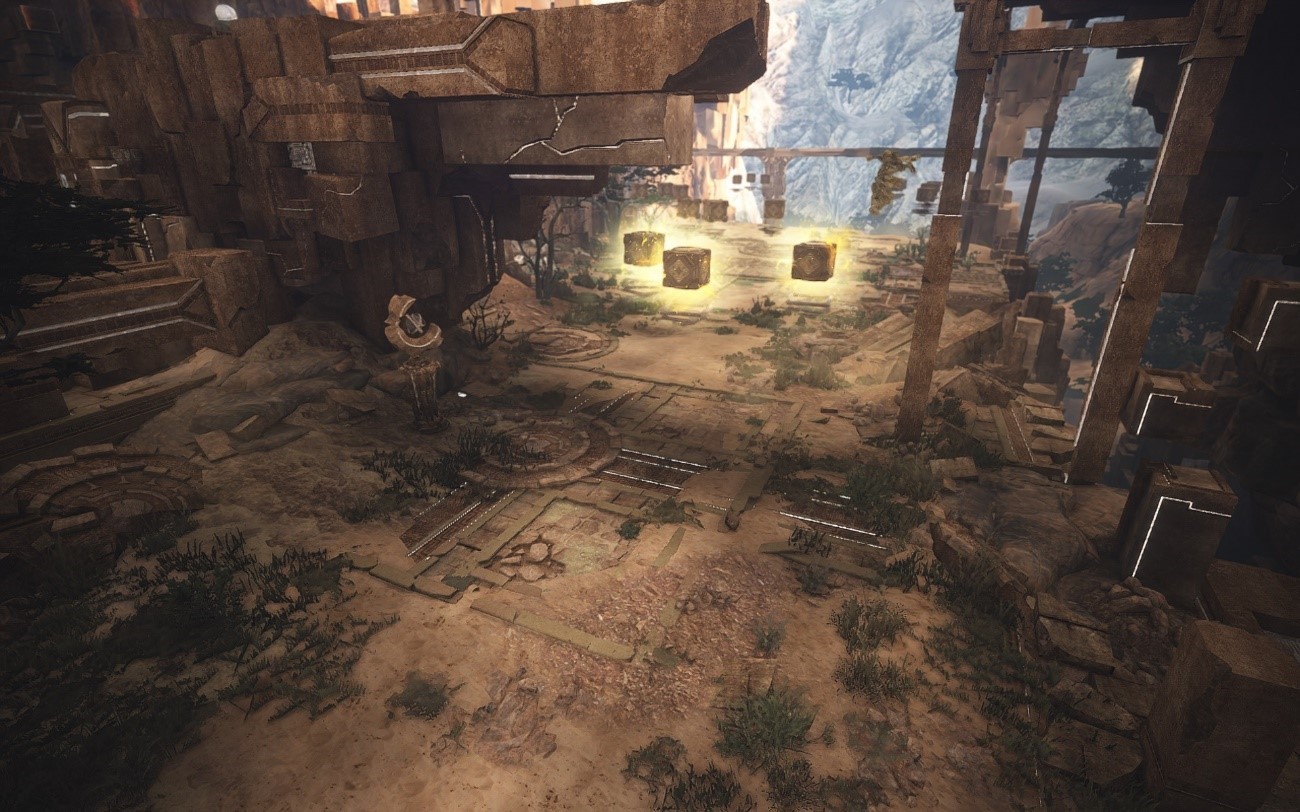 ▲ Defeat Krahten to obtain Searing Heart Piece and combine it with Vaha’s Dried Fang.
There is a chance of Krahten appearing as you defeat Ancient Weapons in Vaha’s Heart.
TIP: You can defeat the flying Ancient Weapon, Putorium, by using a matchlock that can be obtained from Vaha's Heart – Exchange. 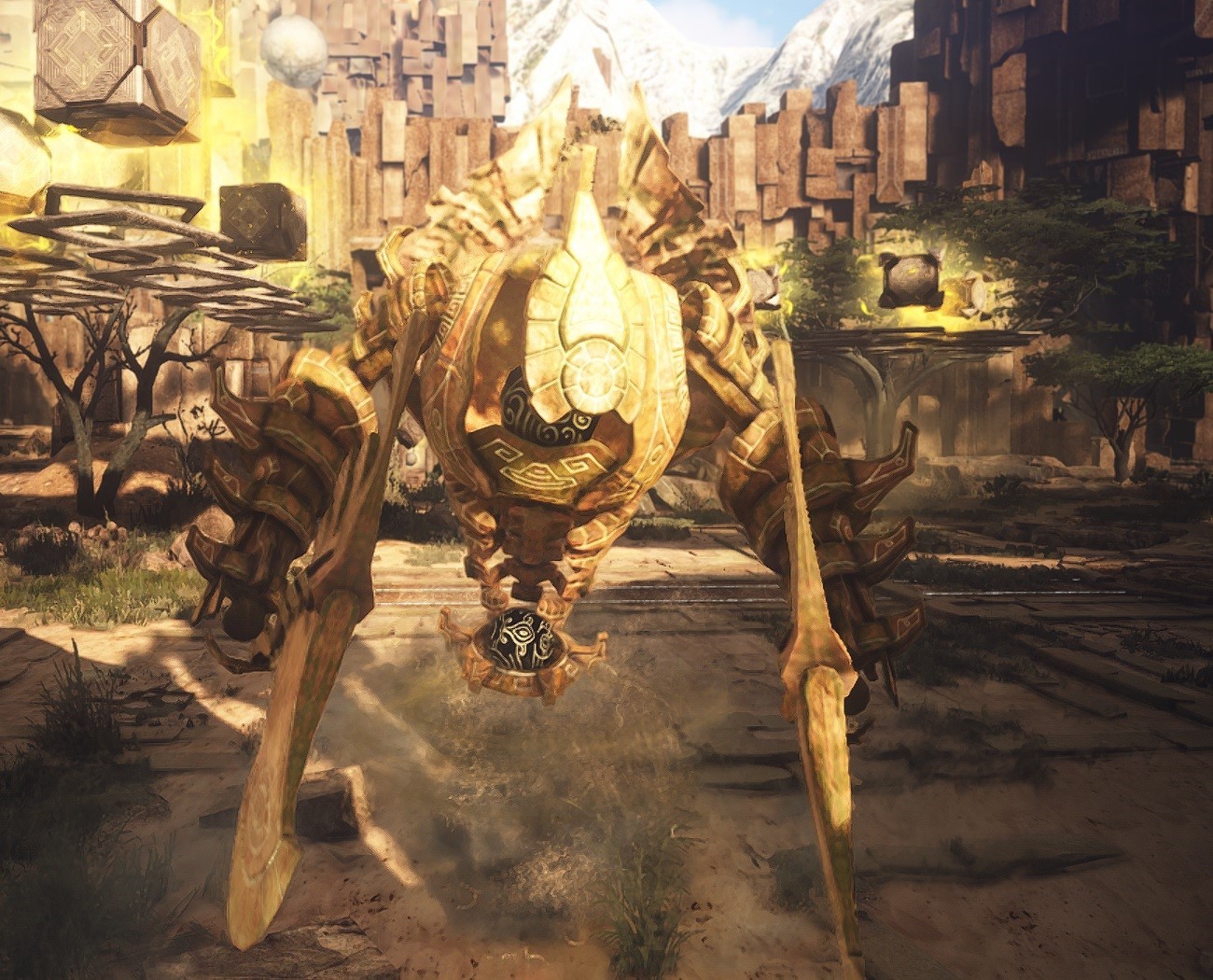 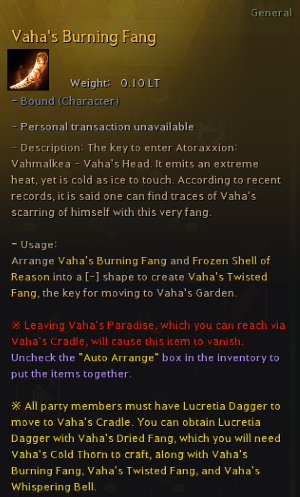 ▲ Arrange Vaha’s Dried Fang and a Searing Heart Piece into a [-] shape.
While in possession of Vaha’s Burning Fang, interact with the Sol Magia in Vaha’s Heart to enter Vaha’s Head. 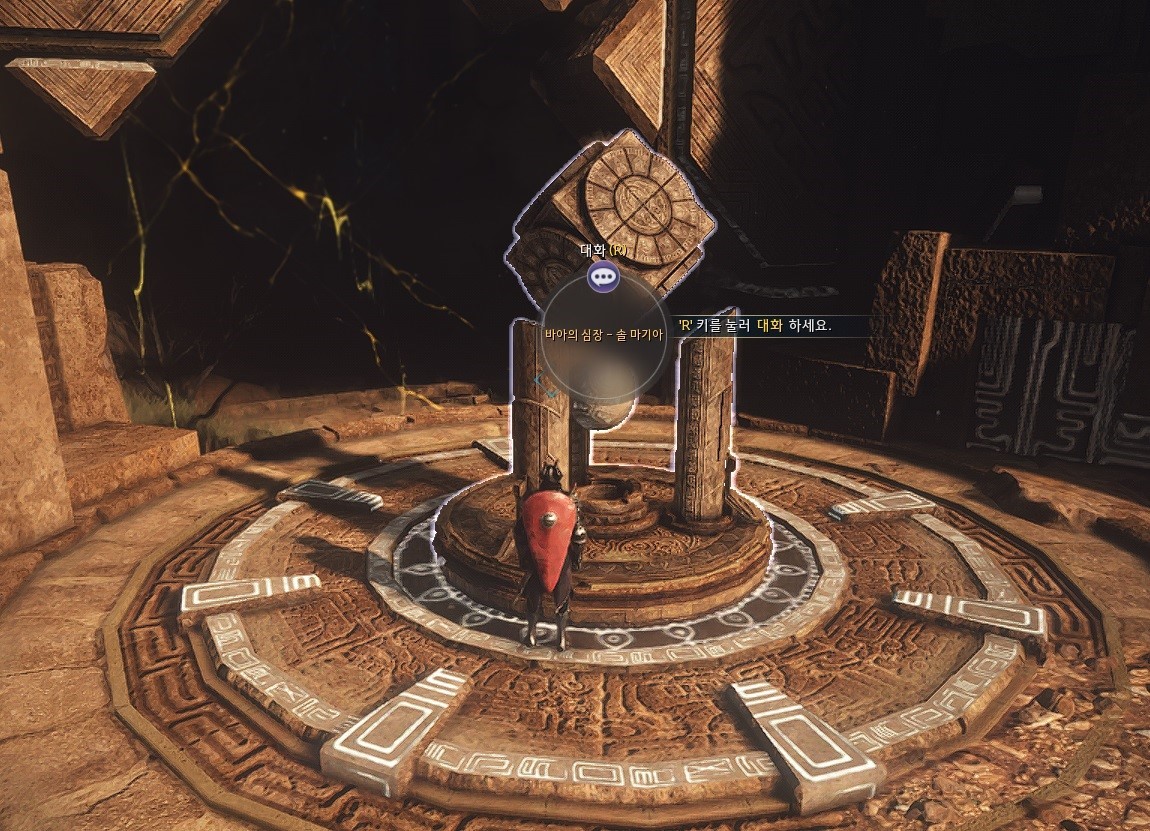 ▲ When you have Vaha’s Burning Fang, you can interact with Vaha’s Heart - Sol Magia to move to the next area. 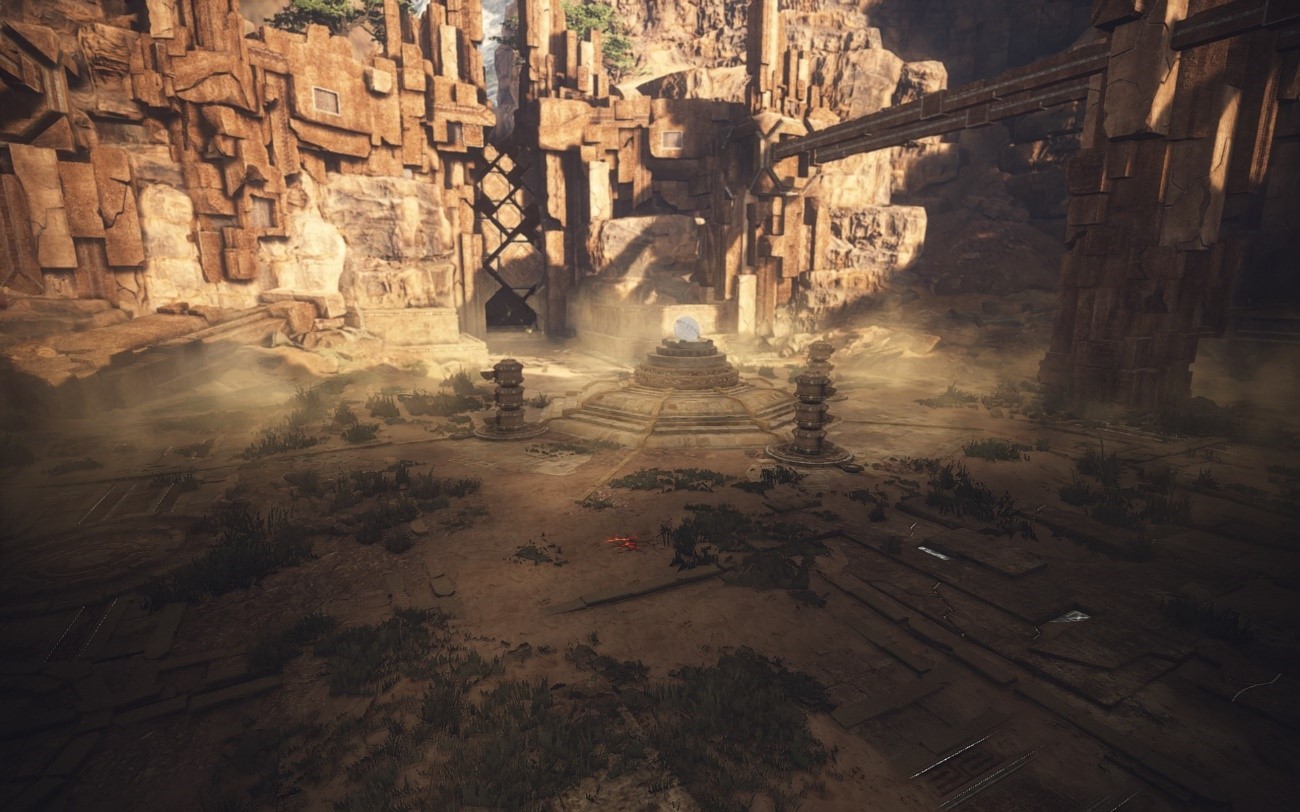 ▲Untangle the Stellagia thread and defeat Ahtenn to obtain a Frozen Shell of Reason and Vaha's Whispering Bell.
When you're at Vaha's Head, interact with the central Stellagia and solve the thread. After that, Athtenn's Fragments will appear. When you defeat enough fragments, Ahtenn will appear. 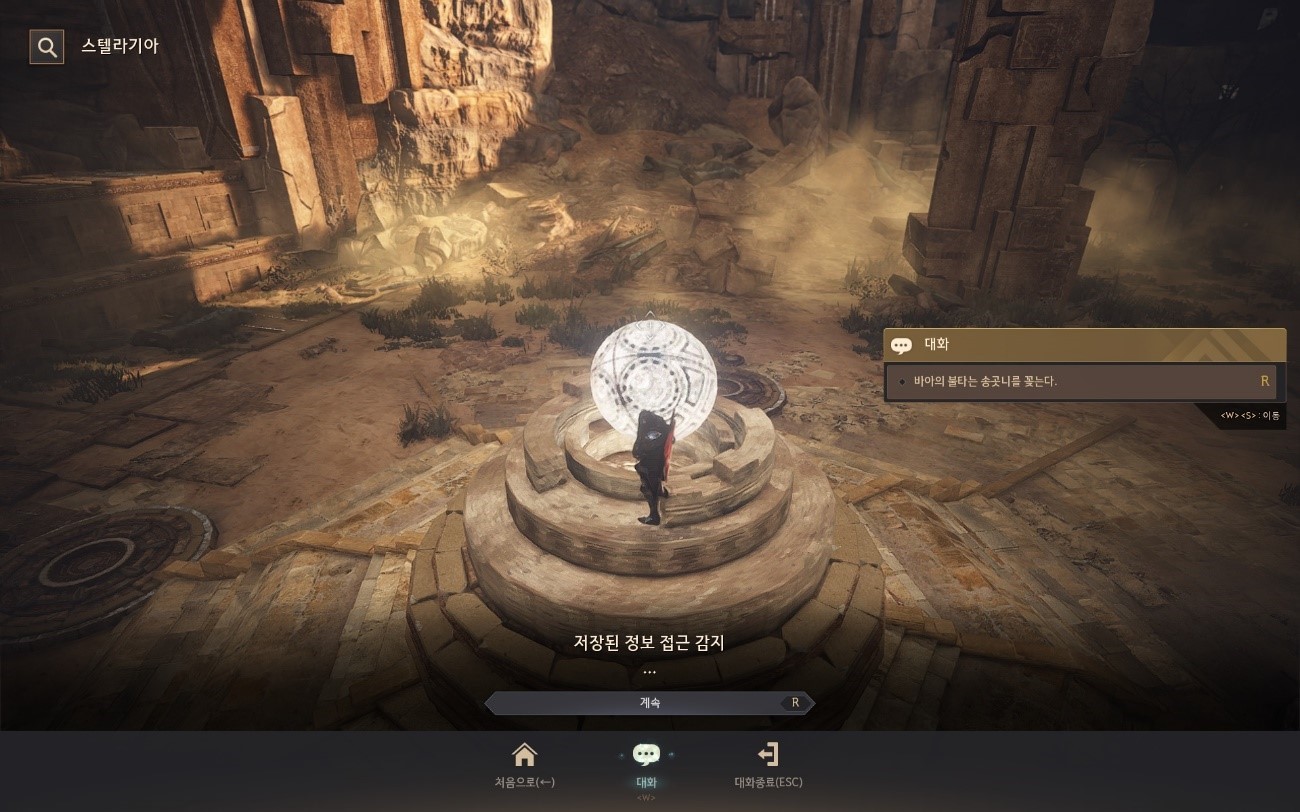 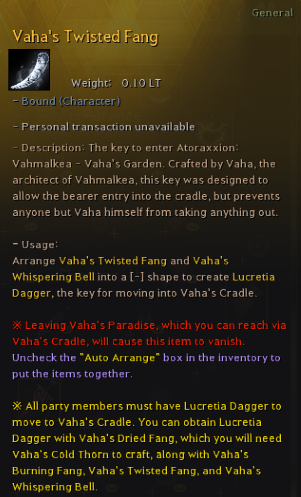 ▲ Vaha's Burning Fang and Frozen Shell of Reason into a [-] shape.
While in possession of Vaha’s Twisted Fang, you can interact with the Sol Magia in Vaha’s Head to move to Vaha’s Garden. 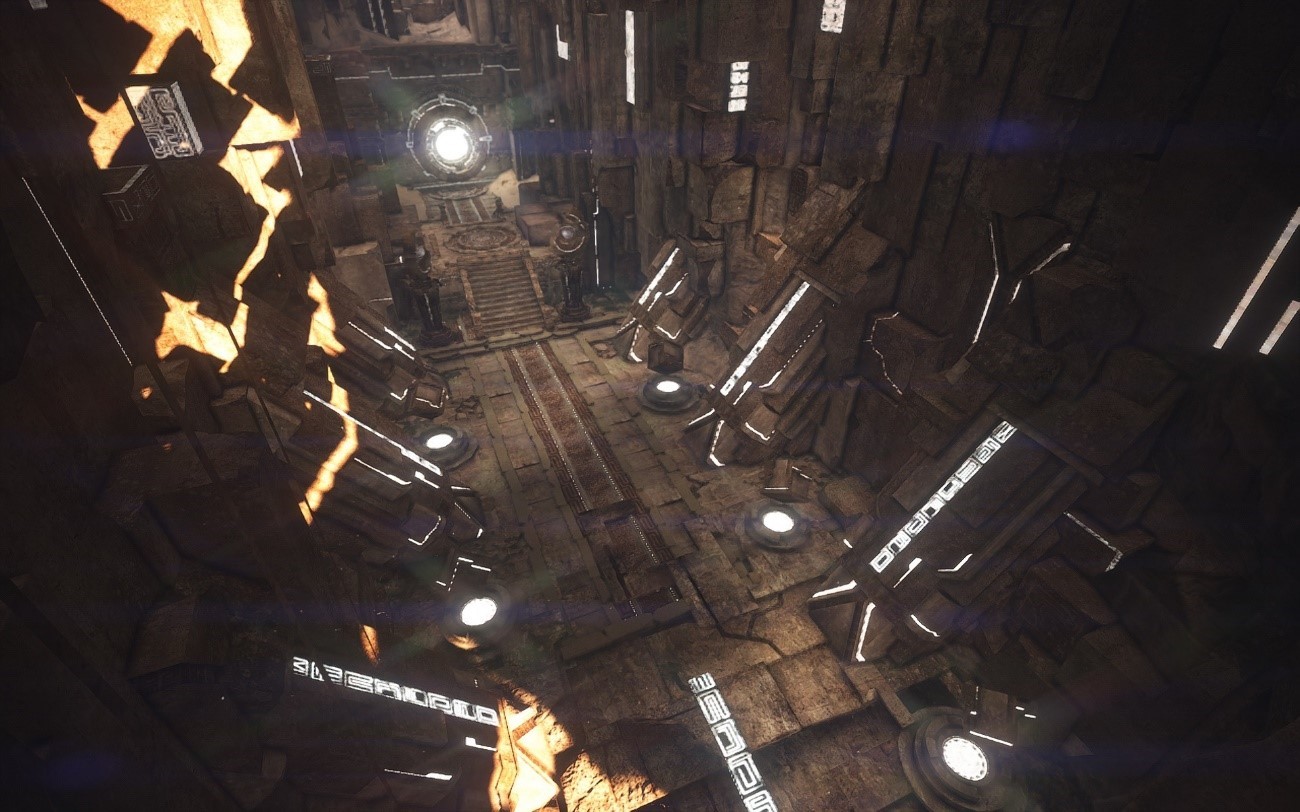 ▲ Insert the Lucretia Dagger into the Sol Magia.
Monsters do not appear in this area.
Arrange Vaha's Twisted Fang, which you obtained from the previous area, and Vaha's Whispering Bell into a [-] shape to obtain the Lucretia Dagger. 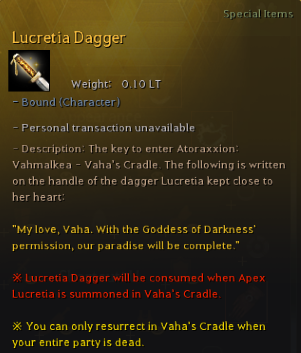 ▲ Arrange Vaha's Twisted Fang and Vaha's Whispering Bell into a [-] shape.
The party leader can proceed to the final area, Vaha’s Cradle, once all party members have placed their items into the Sol Magia. 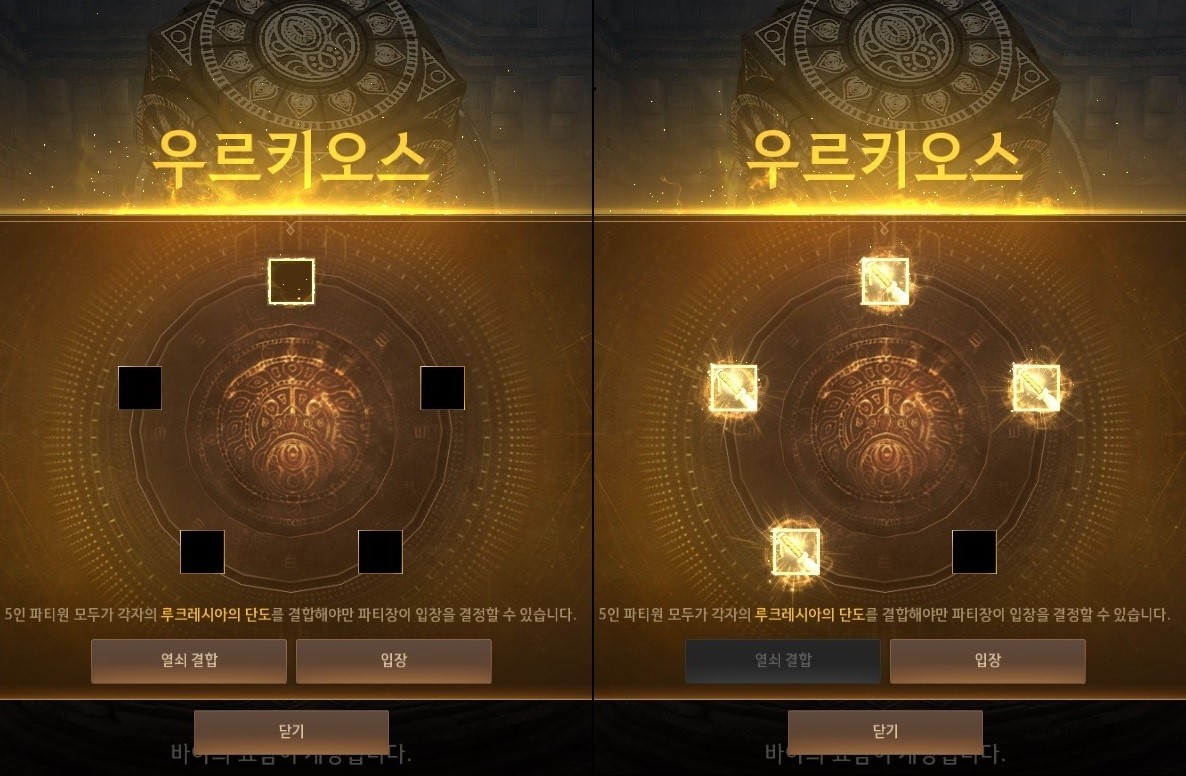 ▲ All party members must place a Lucretia Dagger for the party leader to press the “Enter” button.
While in possession of Vaha’s Twisted Fang, you can interact with the Sol Magia in Vaha’s Head to move to Vaha’s Garden. 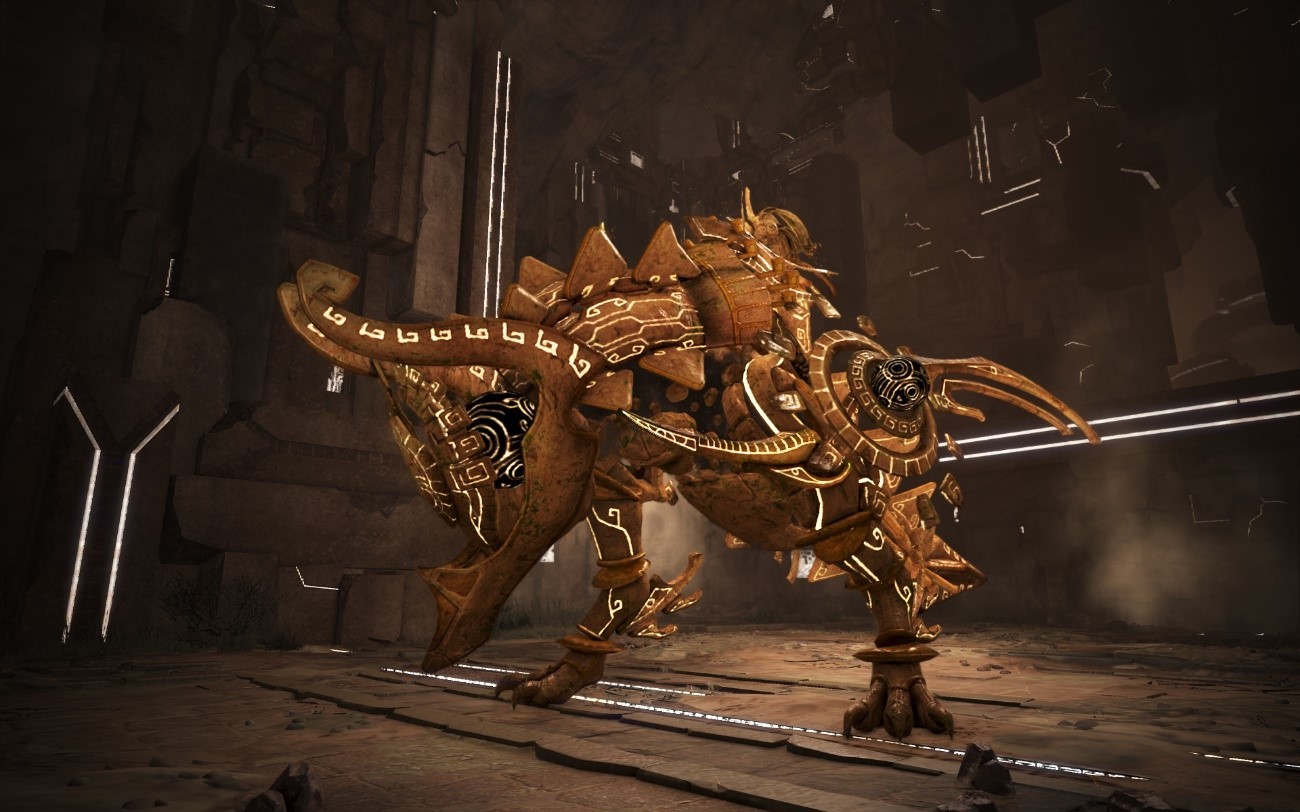 Defeat the last Ancient Weapon, Apex Urukios, to enter Vaha’s Paradise where you can obtain a reward through completing the quest “Vaha's Time Capsule” within the Paradise.
You can obtain the Key of the Sunless Dawn upon defeating Urukios on a Normal server and [Elvia] Key of the Sunless Dawn on the Elvia server.
Rewards are limited to once a week per character and twice a week per Family. On the second attempt, you can only proceed with quests that have not been completed by characters in your Family. (Reset every Thursday after midnight)
* You can obtain Key of the Sunless Dawn after defeating Apex Urukios. (Any difficulty)
* In order to claim rewards for the second playthrough of the week, you need to clear it with another character. A character that has already completed the weekly quest cannot accept another weekly quest until the weekly reset.
You can obtain an [Elvia] Vaha's Rare Box from Desert Chests when clearing your 1st playthrough of the week at Elvia level difficulty. 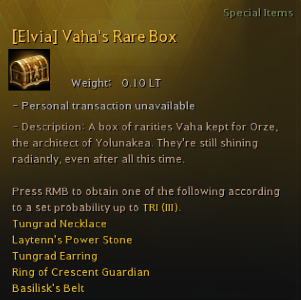 You can obtain a Vaha's Rare Box from Aakmah Chests on Normal difficulty and from Hystria Chests on Elvia difficulty after your second playthrough of the week. 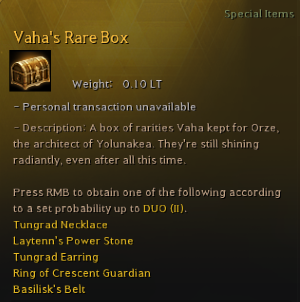 Challenges can be completed only once per Family and rewards can be claimed via the Challenge Window (Y) when logging in again after having met the requirements.

Quest for Clearing for the First Time

You can accept the [Atoraxxion] The First Savior quest with a character of Lv. 60 or higher via the Black Spirit - Main Quest (Q) once per Family.
This quest will be completed the first time you successfully clear the Atoraxxion: Vahmalkea questline. However, it can be cleared at the Normal or Elvia level.

Golden Tears of the Desert 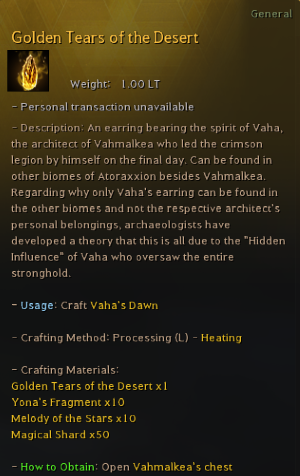 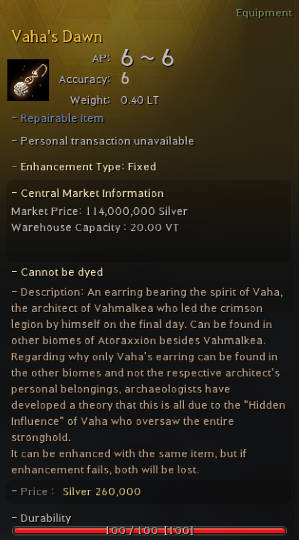 Obtain Golden Tears of the Desert from the following bosses within Atoraxxion according to a certain probability.
Request to Update Adventurer's Guide
Atoraxxion: Vahmalkea