● Discount on Packages & Bundles in Time for Black Friday! event has started.

In celebration of Black Friday, we are offering discounts up to 90%! 🎉

Check out the details below so that you don’t miss out on the chance to get a special discount on the product you’ve wanted to purchase!

[Discount on Packages & Bundles in Time for Black Friday!]

The Crimson Dragon Garmoth is appearing on Sundays during the event!

Take on the fanatical Kagtum and the ferocious Garmoth herself for a chance to claim your very own Garmoth’s Heart!

Like a night sky adorned with countless stars, watch as your Challenge (Y) menu fills Desert Star Chests the more you play!

Naru gear was really helpful for leveling from the Serendia questline to the Mediah questline and was also a sort of a tutorial gear that helped with understanding all levels of enhancement in Black Desert. The gear was designed to help you progress through Mediah with little difficulty, but Adventurers not yet used to the skill commands felt a much steeper difficulty spike than others. Due to this, we improved the stats of the Naru gear to allow for a safer adventuring experience. We will continue to provide quality-of-life updates for our new Adventurers.
● Added a feature to easily exchange the PEN (V) Naru gear (excluding accessories) obtained by a season character for PRI (I) Tuvala gear through the relevant UI.
- The button for converting to PEN (V) Naru gear will appear in the upper left of the Equipment UI when your season character has a piece of PEN (V) Naru gear equipped or in their Inventory.
- Use the Convert UI to convert your PEN (V) Naru gear into PRI (I) Tuvala gear.
- Changed the Season Pass objectives for converting to PRI (I) Tuvala gear, due to the addition of this feature.

● Added effects to each parts of the Naru gear that improves depending on their enhancement levels, PRI (I), DUO (II), TRI (III), TET (IV), and PEN (V).

● Changed the description for "Monster Damage Reduction Up," an extra effect gained by enhancing gear.

● Changed your character to display a motion where it cheers with joy when you obtain a Pure Black Stone item.
● Added a note of caution to the item description of Pure Black Stone about its duration and expiration. 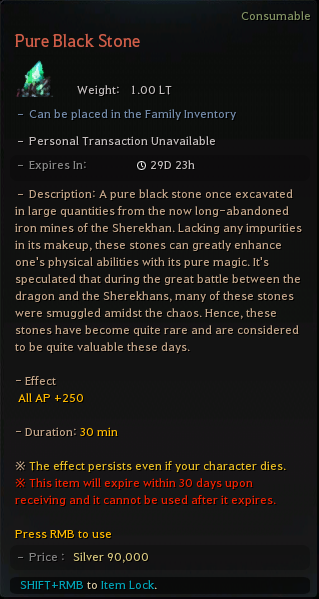 ● The third volume of Alustin's Alchemy Journal was discovered among the old books in Calpheon. It's available to Adventurers that completed the first and second volumes. You can uncover more about the story of young Alustin and Caphras, and how their paths crossed with some courageous, unknown adventurers.
● Changed the following completion requirements for the Season Pass due to changes in converting PEN (V) Naru gear to PRI (I) Tuvala gear.

● Improved the following Season Pass objectives for equipping Naru gear to be able to be completed by talking to the Black Spirit (/) when you have already exchanged Tuvala gear without having equipped Naru gear.
- The button will only be displayed when talking to the Black Spirit if you have the PRI (I) - PEN (V) enhanced Tuvala gear pertaining to the Season Pass objectives in your possession.

● Changed to no longer be immune to desert sicknesses when traversing the desert, and sailors' health will now deteriorate while they are out sailing and exploring.

● Increased the drop rates of the following items for the top 20 contributing Adventurers that help defeat the World Boss, Thundercloud Kutum.

● Changed the item required to complete the "Curing Someone" quest from a trade item to a quest item.
- Due to this change, the reward item for the preceding quest, "Craft Medical Kit" was changed to the pertaining quest item.

● Changed Node Wars so that War Heroes can participate in some of them.

● Added the function to save custom colors in the Color Palette for hair/gear (outfit) customizations in the Dye (J) and Beauty Album (F4) windows.
- Open the Color Palette UI, then press the Save Color button to save the desired color.
- These saved colors will remain even after changing servers or disconnecting from the game. You can use them for dying your character's hair or gear (outfit) whenever you please. 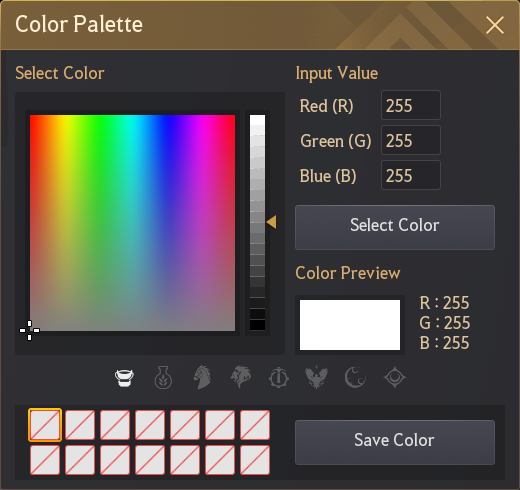 ● Changed the residence icon to not be displayed when you only own the Blue Maned Lion's Manor.
● Changed the command for switching to your Family Inventory on the Inventory UI from pressing RT to pressing and releasing RT in the gamepad UI mode.
● Fixed the issue where the background for the area of the Adventure Log's citation button would appear abnormally.

● Changed the Region of Residence section in My Page to be unable to select a region if the region was set to ETC.
- If your region is currently set to ETC, please submit a ticket to Support and request that your region information be changed to somewhere else.

- As a result, we've temporarily removed the Facebook login icon.

● Added details explaining about backup codes and how to apply to get your OTP removed on the OTP Backup Code page.
● Fixed the issue where the 3 notices at the top of Announcements page did not open.
● Improved the font size for My Page, log-in page, and sign-up page when viewing the pages on a mobile device.
● Fixed the issue where you couldn't verify your email for PC Registration when logging in with the Link an Open ID option.
● Improved the font size when viewing the Black Desert official website on a mobile device.
● Fixed the issue where the screen wouldn't scroll properly when you click the Cookie Use Policy on the bottom of the Black Desert official website.
● Improved certain notification mails pertaining to your account.
● Improved certain parts of the UX for the sign-up page.

● Changed the following terms in English:
- The Origin of Mystic Power to The Origin of the Powerful Energy.
- Desert Sickness, Disease to Desert Illness.