Unfortunately, today is the final installment of the “Learning About World Bosses” series. 😥 [GM] Daisy’s last lesson will be about Vell, the Heart of the Ocean!

Whether you’re a new Adventurer who has no idea what World Bosses are, or a returning Adventurer trying to remember where Vell spawns, everyone is welcome!

Beginnings of Vell, the Heart of the Ocean

Vell first surfaced into the Black Desert world in January 2018.

What’s the story behind Vell? 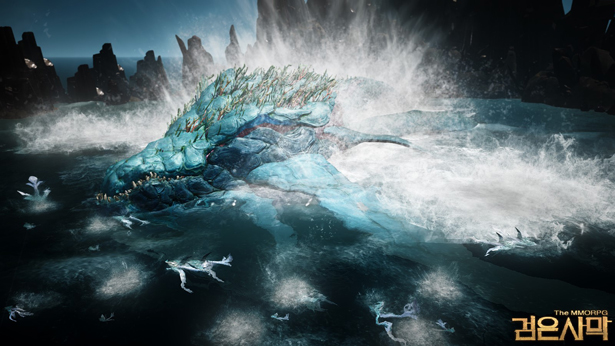 ▲ The Immortal Heart of the Ocean, Vell!

Oquilla, the goddess of the ocean, coveted the sun and moon that sat in the heavens. Her desires would bring her to try to create them within her great ocean. After devoting a great deal of time, she finally made what she thought were the eyes of the sun and moon. Yet, her creations were nothing like the blazing sun and ethereal moon. Instead, they were simply grotesque monsters.

With a furious scream, Oquilla hurled the monsters somewhere into a deep abyss within the great ocean of the human world. She then whispered, “If the enraged cries of these monsters ever reach my ears, I shall wipe the world clean with a tidal wave of darkness. Let the humans and twelve constellations know that it is their duty to ensure the two monsters never leave their resting places.”

This tale is said to be written from Oquilla’s Eye, an island surrounded by unpredictable waves and weather. It had long been isolated from the outside world, and the island’s natives worshipped the ocean’s sun and moon as gods while living in harmony with the ocean.

Once the stories of this mysterious island spread amongst the pirates, many began to dream of being the first to set foot on it. The pirates would end up forming a “pirate union” to find a passage to Oquilla’s Eye. They would eventually piece together the fragments of an unknown constellation map to reach the island. It would be Leanar, the captain of the pirate union, who would be the one to unveil Oquilla’s Eye to the world for the first time.

When Leanar saw the two “treasures of the ocean” for the first time, she unknowingly became deeply fascinated by them and spoke the following words.

“The two sea creatures that roam the tranquil abyss of the Great Ocean may have been monsters to the goddess, but the Black Turtle tribe seemed to worship them. As for us, we thought of them as treasures of the sea. The goddess, according to the myths, did not even name the two monsters but the Black Turtle tribe called them the Eye of the Sun and the Eye of the Moon. We called them Vell and Khan.

Oquilla's Eye is a quiet island in the midst of constant, raging storms as if it were in a realm of dreams that is completely disconnected from the outside world. We thought that it was a place that was meant to never be known to the rest of the world.”

Following her captain’s last wishes, Kanilla Delcas—the first mate of Leanar’s crew—would escape with Vell. She would wander the vast ocean in search of the “Luminous Abyssal Rock,” which was mentioned in the stories of the natives as the only thing Vell would eat. Eventually, they would try to return to Port Epheria to avoid the Pirate Union, but the other pirates had already spread the word that they were the “Infamous Vell Pirates.” Thus, Leanar’s crew were attacked and destroyed by the Calpheon Navy, ending the legacy of the so-called “Vell Pirates.”

This battle would be recorded as a “Glorious Day” for Calpheon, and also mark the first time Calpheon learned of the existence of Vell, the monster nurtured by the “Vell Pirates.” The same records would show that although all of the Vell Pirates had been defeated, the Calpheon Navy failed to catch Vell, and the monster had fled in the direction of Margoria.

It’s said that the following words are written in Kanilla Delcas’ Journal of the Star Chasing Vell Pirates...

“...After all that happened, rumors were spread and the people of Epheria no longer welcomed us. We became known as the vile Vell Pirates and as I am writing this, I am afraid our fine group will soon be no more. Vellalops, I pray that you swim far away, and stay safe and free.”

When Vell surfaces, an immense wave created from Vell’s rage will cover the entirety of Vell’s Realm. You’ll need to be careful as this wave will inflict massive damage.

Once the battle is in full swing, Vell will try to destroy the ships firing upon it with Lopters, fragments of Vell itself. Adventurers can use a [Hunting] Matchlock to repel the incoming Lopters. On the other hand, Vell can only be damaged with cannon fire. Make sure to avoid staying in one place for too long, as Vell will unleash powerful “breath” attacks throughout the battle.

If you’re in a party or platoon while you battle Vell, your party or platoon will share the same battle contribution for cannonballs fired by any of the party/platoon members. As a result, whether you are navigating the ship, repelling the Lopters, repairing damage, shooting the cannons, or just watching out for attacks, everyone in the party or platoon just needs to do their best.

After Vell takes enough damage, it will become enraged and unleash an incredibly powerful attack in the form of a massive tidal wave, which will wipe out any Adventurer on the surface. You can hold onto your ship or dive into the sea to avoid this attack.

Once Vell is defeated, the loot from the battle will be sent to your Black Spirit’s Safe.

Where does Vell Appear?

What rewards do you get for defeating Vell? 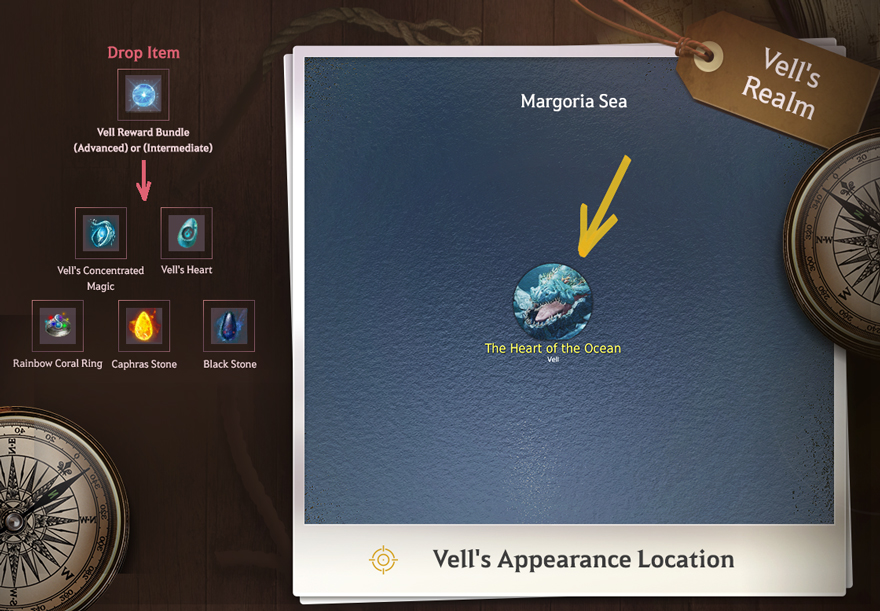 Vell, the Heart of the Ocean, appears in Vell’s Realm in the Margoria Sea.

Remember that you have a higher chance at better rewards the more you contribute to Vell’s defeat, so keep your chin up and fight with courage!

An alchemy stone with the highly concentrated magic of Vell. Right-click this item to equip it 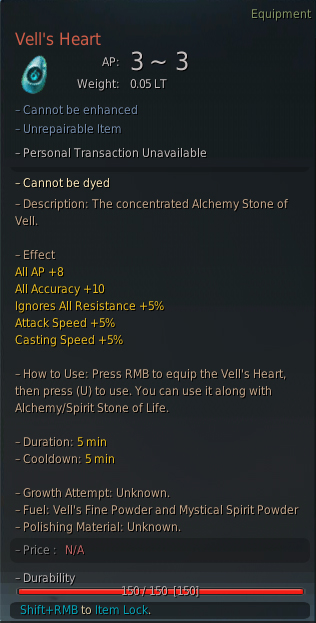 Equipping and activating Vell’s Heart will grant you the following buffs: All AP +8, All Accuracy +10, Ignores All Resistance +5%, Attack Speed +5%, and Casting Speed +5%. It lives up to its reputation, right?

A ring with the aura of the sea. It is decorated with a beautiful rainbow coral.

It said that the immortal alchemist Caphras used stones like this as the ultimate catalyst. The stone is sometimes referred to as the solar stone, because of the intense and pure energy that emits from it. It can be used to unlock the full potential of a piece of gear without the risk of experiencing any dark, corrosive side effects.

So, when does Vell appear? 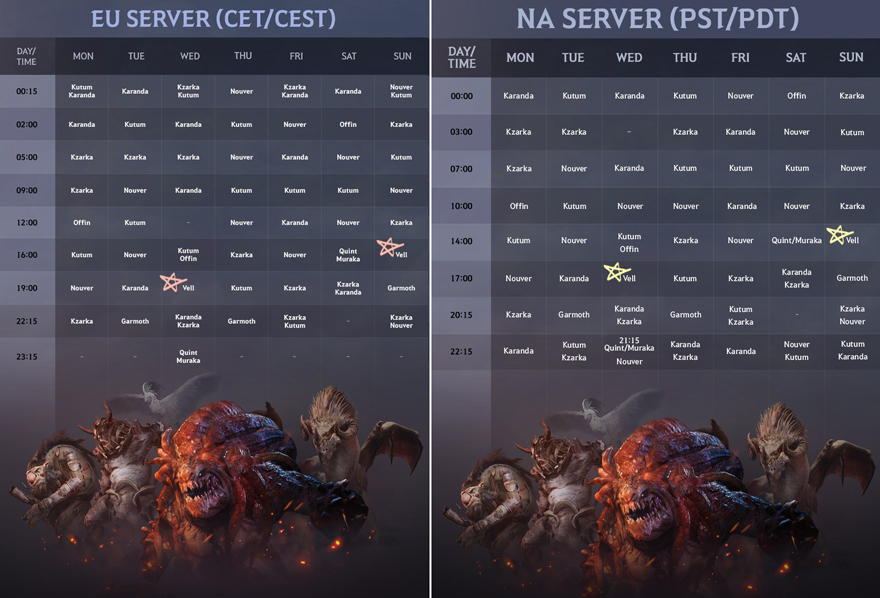 That covers pretty much everything about Vell. Now, it is time for you to go out and face Vell yourself!

Adventurers, we hope you enjoyed our “Learning About the World Bosses” series! Hopefully, our coverage of all the World Bosses helps you out as you continue your adventures in the Black Desert world.

View list
14
Otogakur
Awesome! Thanks for sharing. It's great to learn more about these world bosses. Keep it up.
Outssiderr
After few years of opening vell bundle i start thinking heart is a myth and there is only one way to obtain it, throught market place.
Quelnar
@Outssiderr Well, according to bdocodex, the odds for getting Vell's Heart are 0.01%, and the odds for getting Vell's Concentrated Magic are 1% - and of course, it's not like you get very many chances per week. Plenty of folks have been going religiously
for years and never gotten it. As with a lot of stuff in this game, the odds are just too poor, and all you can do is go and hope that you get lucky.
Squirrèl
@Quelnar I know someone in my guild that has gotten Vells heart 2 times and his Magic 3 times in the last 4 months. I myself have gotten it once. I think it's broken to be honest if the drop rate is that low how is he getting it almost every time he goes
out pretty much, is a question I ponder.
Outssiderr
@Quelnar But its still a joke when u be at almost whole time at vell past 3 years and dont get heart or event 100m goldbar heh
WW
that I have yet to get the heart after all this time is one of the things that discourages me from playing.
frozenpearl
the one thing that i don't want to waste my time for getting that heart it because u can't even repair it
Hydro
@frozenpearl You can recharge it
frozenpearl
@Hydro but its said unrepairable
QEDs
@frozenpearl Its actually rechargeable, I got it as well
Noveenia
Could you increase the weekly frequency of Vell please?
breikiji
52 weeks is 1 year i did vell 2 times a week for 1 year and didnt get it and know people from my guild who didnt miss this bos from 2018 and they still didnt get heart .My opinion is that drop chanse doesnt increase at all from each kill ,as devs said
.
WhereRNG
@breikiji Same, going to every possible vell since I started playing, never missed a Vell in almost a year and knew some guys who got Vell's Concentrated Magic two times in a row and have a total of 4-5 Vells and don't have half the times I went there,
I even wanted to ask a GM through a ticket, is the Vell event still up, cause I don't feel it. Worst thing that can happen is to have your character jump three times in a row, back then when Vell was only once a week and every damn week to be a Coral Ring,
I still don't know why they didn't remove the animation when you get a coral ring, why should someone be happy to get that. I also never missed a event where the chance to drop Vell was higher, still nothing, while others get 4+ in a shorter time.
DaddymakesmeUWU
Nice event.
Cancel Submit
Cancel Submit
1
View list