The character tag/item copy event that lasted for the past 8 weeks has ended.
The event was intended to help Adventurers select a class after the reboot, but the positive response went beyond our expectations as many of you expressed your enthusiasm at being able to try out an array of new classes.

The item copy function was first released in September of 2020, with the intent to allow our Adventurers to dabble in other classes in addition to whichever class they had chosen to main. The MMORPG genre requires significant investment in a single class, and we sought to alleviate that element of constraint with the item copy function. We also hoped this would make Black Desert's unique and varied classes more approachable.

The item copy function served its role well and this event eliminated the burden of payment required to use this function. With the barrier to entry removed, all Adventurers had the opportunity to benefit from it, and we are glad it received such an enthusiastic response.

Although the event has drawn to a close, we are planning to lower the barrier of entry to the item copy function, while maintaining careful consideration for its impact on the in-game economy, including the use of Silver, which we know is of concern to our Adventurers.

Thank you for your sincere enjoyment of this event and we hope you look forward to greater access to this content in the future.

● BDO Café Contest event has started.
- February 16, 2022 (Wed) - March 2, 2022 (Tue) 23:59 (UTC)
We have just returned from a long arduous adventure and are looking to quench our thirst with something truly magnificent. To do so, we’ve put together a contest to find the best Black Desert Online themed beverage!

● Traces of Memories event has started.

Share your most memorable stories, moments, updates, or events that you've experienced during your Black Desert adventure!
[Traces of Memories] ● Black Spirit Buffs event has started.

● Added three new skills that can only be used during Node/Conquest Wars.
- So, including the pre-existing skills that can only be used in Node/Conquest Wars (Yianaros's Light/Pilgrim's Steps/Knight's Defense), you will be able to learn one of six skills.
- Once you learn one of these skills, you will not be able to learn the other 5 skills.
- These skills can be learned by using the items [Secret Book] Guild Tactics I to V. The books can be obtained by exchanging Resplendent Medal of Honor, which are rewards for Node/Conquest Wars.

● Fixed the issue where you gained the Invincible effect if you were struck while equipped with certain items such as [Combat] Trina Demolition Axe, fishing rods, and Garnier Guitar.

● Spirit's Shackles - Fixed the issue where the skill failed to activate when used during S-block with a kamasylven sword.

● Prime: Abyssal Flame - Fixed the issue where Fragment of Darkness were not recovered when comboing into other skills quickly while the skill was on cooldown.
● Soul Harvest, Wings of the Crow - Improved the camera effects applied during these skills.

● Below the Belt, Crust Crusher - Fixed the issue where Core: Spinner's damage and defense effects wouldn't be applied when comboed into after these skills.

● Added text to the descriptions of the following skills that explains how you can instantly activate the skill of the same element via commands.
- Burning Pulse, Luminous Touch, Freezing Gaze, Magnificent Steps
● Fissure Wave - Changed the description on the skill's damage to match the actual effects.
- Attack damage 923/1029/1137/1287% x 10 → 923/1029/1137/1287% x 1, Max 10 hits
● Improved the attacks of the following skills to be applied simultaneously:
- Lightning Blast, Detonative Flow
● Fixed the issue where attacks wouldn't be applied sometimes when rotating the camera angle during the following skills:
- Lightning Blast, Detonative Flow, Barrage of Lightning
● Perfect Sign - Fixed the issue where the skill add-on effects wouldn't be updated after Fissure Wave.

● Flailing Blades - Fixed the issue where the skill's 2nd attack would activate upon reusing the skill after comboing from certain skills during cooldown.

● Fixed the issue where the buff applied to the Shai would only last for 30 seconds if your character moved while using the following skills.
- "Shout to the Sky", "Sun, Moon, Stars", "Summer Rain", "Time to Shine!"

● Constriction - Fixed the issue where the skill's grapple area was larger than intended under certain circumstances.

We originally blocked Tagged characters from accessing Imperial Delivery content in order to prevent the Character Tag system from using the content to in any way other than it was originally intended. However, we found that it was causing Adventurers enjoying the Item Copy and Character Tag systems a major inconvenience. So, we decided to enable Tagged characters to access Imperial Delivery. We will continue to improve the gameplay experience of all our Adventurers.

Narchillan gear was added so that Adventurers would have easy access to gear by trading in their Naru gear without the pressure/need for further enhancement.
However, unlike its defense gear iteration, Narchillan weapons would be converted into weapons suitable to the class of the character who opened the weapon box, thus making it difficult for Adventurers to use the weapons on other characters in their Family.
With this update, we added recipes and relevant items to convert Narchillan weapons back to their former box state so that Adventurers can easily move and use these weapons on classes they are not so well-versed in. Items required for the conversion process can be purchased from blacksmiths located in each of the major cities and towns.

We hope that many of our new Adventurers will be able to try playing with a variety of different classes.
● Added recipes to convert Narchillan main, sub-, and awakening weapons back into box form.
- You can use Manufacture (L) with the following recipes to obtain Narchillan weapon boxes.
- Narchillan Processing Stones (Main/Sub-/Awakening Weapon) are sold from local blacksmiths for 1 million Silver each.

- Once you've completed at least one of the Narchillan Main, Sub-, and/or Awakening Weapon exchange quests, a new dialog option will be available through Fughar - "[Help] Exchanging Narchillan Weapons."
● Adjusted the item drops for Kamasylvia and Drieghan territories.
- The following monster zones are affected.

- The following items that drop from the aforementioned monster zones have been reworked to drop in loot box form.

Many of our Adventurers were asking for the gear loot rework, so we condensed the gear dropped in these monster zones to now drop as boxes. This rework will help reduce the burden placed on our Adventurers' inventory slots.
● Added the "Nouverikant" title for Adventurers who have obtained both Nouverikant Armor and Nouverikant Helmet.
- You can obtain this title after completing the "Nouvermon" quest by talking to the Guest of the Mountain of Eternal Winter with both the Nouverikant Armor and Helmet equipped.
- If you've already completed the "Nouvermon" quest, talk (W) to the Black Spirit (/) to obtain the title. 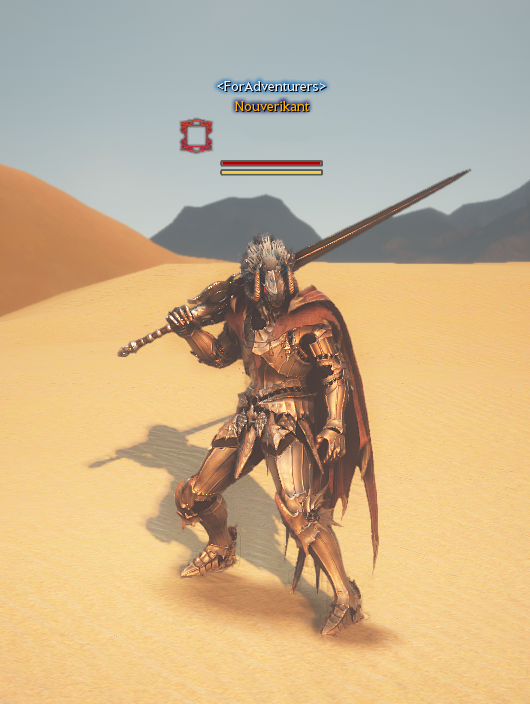 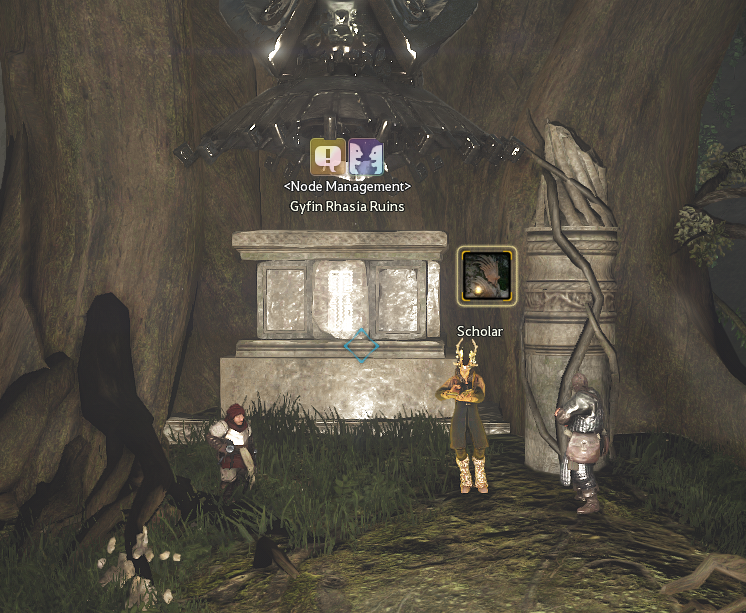 - Once you complete all six quests, you can exchange 150 Energy for each furniture design from Stella.
- The designs can be used at a Level 5 Furniture Workshop to craft the Flondor furniture items. 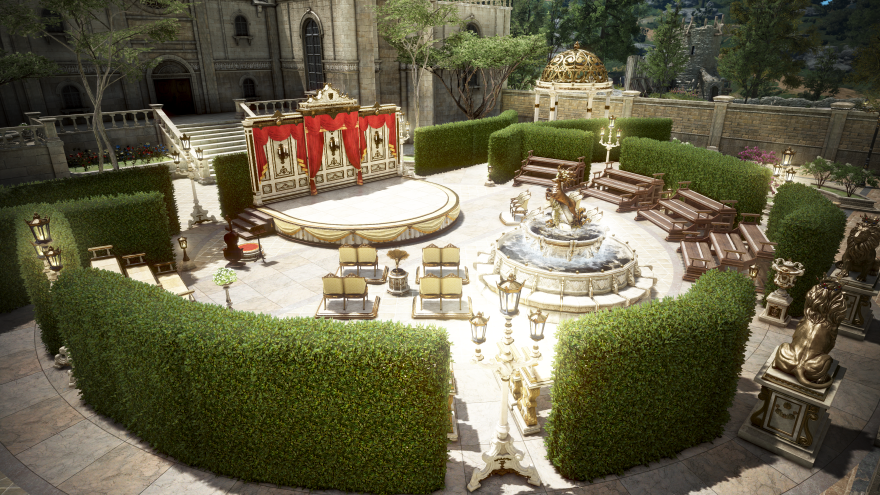 ● Changed the Guild Base Server selection UI to display one list of servers.
● Added text to the Guild Base Server selection UI informing of a 30 day wait period to change base servers.
● Added an alert message to display when attempting to use a Pure Black Stone, Devil's Draught, Mermaid's Tear, or Breath of All Creations.
● Improved the buff icons for Pure Black Stone, Devil's Draught, and Mermaid's Tear.
● Added information regarding the amount of time consumed when attempting to breed in the Stable's Breeding Market.
● Added a feature that allows you to use Reward and Reward for Repeated Completion on Black Spirit's Adventure window in Gamepad UI mode.
● Improved the Reward UI on the Black Spirit's Adventure window.

● Carried out the optimization of the database dealing with the item obtaining process.

● Improved the Music Album's to no longer scroll up to the top of the song list after pressing the "Back" button while viewing a song's details.
● Changed the Photo Gallery's Popular Photos tab to display "Recent" and "1 Year" posts as default.
● Changed to return to the page you initially accessed upon completion of logging in and signing up on the Black Desert official website.
● Fixed the issue where the guild names would differ when searching certain guilds on the Guild page.
● Changed the Best tag icon on the Forums page.
● Fixed the issue where the background of the "Replies" description on the album-type forums of Adventurer's Board would appear abnormal.
● Changed to now be able to search Family and Character names that have underscores in them from the Adventurer page.
● Added a button that allows you to move between the Adventurer Profile and Community Activities pages.
● Fixed the issue where you would move to the main page when clicking the GM icon on posts and list of posts.
● Added a function that allows you to check whether you move to the website appropriate for the connected IP when connecting to the Black Desert website of a region that does not match the connected IP.