Class Changes
● Fixed the issue where the  "Invincibility" defensive effect would sometimes be unintendedly applied when your character was slowed (either with a speed reduction debuff or as the result of being overweight), or was using another defensive effect.

● Some people have been throwing glass bottles into the rivers and seas in secret.
- You can catch "Discarded Glass Bottle" by Fishing and exchange it for the following items from NPC Crio.

- Crio's Sturdy Fishing Chair will have the following effects and cannot be registered on the Central Market.
* Durability 200, Fishing Mastery +100, Auto-Fishing Time -5% 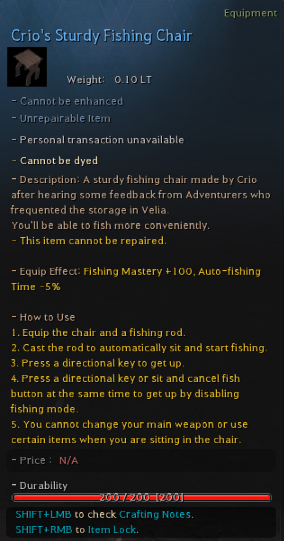 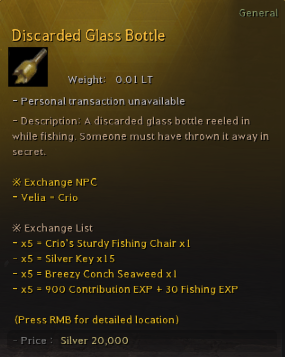 Honor to the Fishing Family Quest

● Added new Fishing Leap Quests.
- The following Leap quests can be accepted and completed only once per Family.

Improvements on some fish prices and Imperial Fishing Delivery Seal

● Doubled the selling price of fish above blue grade
- The adjusted fish types are the following: (122 fish types higher than blue grade)

● Improved the method of obtaining the item "Golden Seal - [Imperial Fishing]" which was available through Imperial Fishing Delivery.
Farmable Fruit Items
● The number of fruit items obtained from plant breeding each Mysterious Seed or Hypha has been increased by 2.5 times.
● Changed some of mysterious seed/hypha item description as follows:
- You can obtain 15-20 Fruit items through Plant Breeding but Seeds cannot be obtained.
Peridot Forest Path Wagon
● Implemented the following improvements related to the Peridot Forest Path Wagon.
- The crafting duration for "Wagon Registration: Forest Path Wagon" in the Wagon Workshop has been reduced by 4.5 times.
* If you were crafting this item in a Workshop, the in-progress worker task has been completed and any related scheduled tasks were reset.
- Prices of: Forest Path Wagon Wheel, Flag, Badge, and Cover have been increased by 2 times in the Central Market.
- Improved so that you always obtain exactly 150 "Piece of Image" items upon performing Simple Alchemy on Piece of Image crafting materials.
Adjustments in certain Life Content and Central Market Item Prices
● Adjusted the price of the following 89 items that can be obtained through Life-Skill related activities.
● The Season: Dawn of Dragons has come to a close.
- All season characters that have not been converted will be automatically converted to normal characters on Oct 5 (Wed) maintenance.
* Adventurers who have not completed either "[Season Server Graduation] At the Crossroad" or "[Season Server Graduation] Into the Big Wide World" will get Fughar's Letter of Encouragement and Gift Box Full of Memories in their mailbox (B).
- All season quests that have not been completed have been deleted.
- Tuvala gear of the highest level per slot that hasn't been converted will automatically be converted and the remaining gear will be deleted.
* Example) If you have both season PEN (V) Tuvala Helmet and season PRI (I) Tuvala Helmet, the PEN (V) Tuvala Helmet will be converted to a normal gear and PRI (I) Tuvala Helmet will be removed.
- Season items (Time-filled Black Stone, Refined Magical Black Stone, Tuvala Ore, Tuvala Conversion Stone, unconverted Tuvala gear, etc.) have been deleted.
- With the end of the Season: Dawn of Dragons, the season servers have been changed as it follows:
Item

● Changed the following Pearl Inventory items to no longer be "bound to character":

● Added a crafting method so the following item can be synthesized into a blue-grade elixir:
- Craft 1: Green-grade Elixir x3

* Ibellab's Essence can be purchased from Material Vendor in each town or Klau in Velia.
● Added so Bonfire Tool can be crafted by Simple Alchemy with Snowfield Cedar Timber.
- Simple Alchemy (L) Bonfire Tool: Any type of Timber x5

and "Dehkima: Token of the Oath"

can be exchanged from NPC Sahin in Valencia.
● Changed the [Event] Pet Appearance Change Coupon to no longer be "bound to character."

● Added the following appearance method of the Gatekeeper monster in the Valencia region.

- Changed so only one player who participated in defeating the Gatekeeper monster obtains a reward.

● Fixed the layout of wagon covers and appearance item slots in the Dye (J) window.

● Proceeded with the optimization of data related to the quest objectives.

● Changed the main video on the official website to display the Abyss One: The Magnus teaser.
● Changed so it redirects to account security page when changing your password in account security center.
● Changed accounts residing in the United Kingdom to now require you to be at least 18 years of age to play Black Desert.
● Changed the date format to match the selected language of the website.
● Improved so the password limit checks to be a minimum of 8 letters when logging in.
● Improved the issue of bottom part being blank when the subtitle of update history is too short.
● Fixed the issue of a not loaded image showing at the bottom of the website via external ads.
● Added a feature where you can enter a Content Creator Code.
● Changed the color of buttons in the Community page.
● Changed so you can now register mobile numbers for your personal profile.

● Changed and unified the following terms in English:
- Ivan → Ivana
- Odd Roks under the Sea → Odd Rocks under the Sea
- Order of the Apricot → Hwasun Valley

● Fixed the issue where the notice text regarding guilds appeared abnormally upon joining one.

● Fixed the issue where the UI status only updated the kill count for one quest when having multiple specific subjugation quests accepted.

● Fixed the text on subjugation rewards which can be checked in the Guild (G) window.

● Fixed the issue where Alliance Chat messages weren't visible for War Heroes if they were on different servers.

● Fixed the issue where while playing Marni's instrument, the imagery remained on the screen upon switching to the gamepad mode UI.

● Fixed the issue where certain regions of the Minimap appeared in black and white.

● Fixed so you cannot adjust the screen size when the screen filter is set in the "NonContrast" mode.

● Fixed the issue where the tooltip would not display properly when moving your cursor over UI buttons and icons quickly.

● Fixed so the description for Fruit Pie and Sweet Fruit Pie items are the same.

● Fixed typos for the below Items and Knowledge: