It has been just over one month since the start of the Adventurer Feedback Board, and we would like to thank all of those who are participating in the exchange of ideas to better help Black Desert.

While it may seem like only the posts moved up to the Adventurer Feedback Board are the only ones we are looking at, we would like to take this moment to reassure all of you that all feedback on the board is being collected and reviewed. We may not have an answer for them right now, but everyone's valuable feedback is being shared internally for future consideration.

And any post that reaches 200 likes will be answered here on the Adventurer Feedback Board. We want to make sure that we have a good idea of the types of things our Adventurers are looking for, so make sure that you put up your interesting ideas or things that you feel could be improved.

Lastly, remember that you can participate in the feedback board through the in-game Adventurers Board(F2) and head to the community tab. From there you can make post, comment and upvote different threads within the feedback forum!

So, without any further fanfare, let’s take a look into some of the highlights from the last month.

Please add a Seasonal-friendly Riding Crop without Mastery – by Kyrissaeane

The first post we would like to take a look at this month comes from Kyrissaeane. With the introduction of the latest season, we took steps to help improve Season Character life skilling. While we removed mastery and associated items, we increased the base item collection amounts, as well as provide large life skill EXP buffs.

Many Adventurers gave feedback on the neccessity of the Riding Crop, and due to that feedback, we added the Fughar’s Riding Crop Item for season characters. 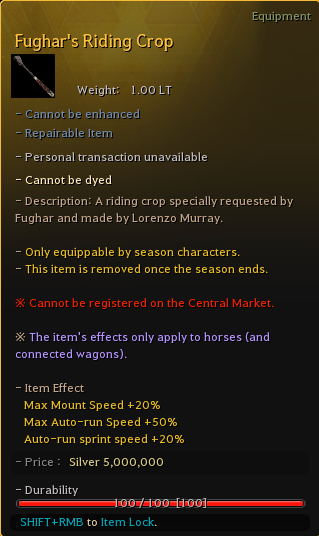 This was a sentiment shared on the Feedback board a lot and has been something that has been looked at for some time. The reduction in overall difficulty of the Training minigame has been a relatively positive thing, but there are some comments expressing that it may have been made too easy.  We will be keeping our eyes peeled on the effects these changes have had on the overall game and will see how things develop from here.

We would have liked to have raised this post earlier, however just raising the post may have caused speculation on the Central Market and caused the Manshaum Voodoo Dolls to disappear before we took them down.

The good news is, Manshaum Voodoo dolls were reworked with the 11/25 Global Labs Maintenance and will apply it to live as soon as it is ready. While we have made some changes to the mechanics of the fight, perhaps the thing that is most interesting is the addition of the ‘Stalwart Forest Step (name not finalized)’ item. This item can be used with Whale Tendon Potions and Whale Tendon Elixirs to enhance their effects.  We have also removed the effects which ignore super armor and frontal guard from Narc Brishka.

This was one of the first posts that was raised due to the sheer number of comments and upvotes it got when we launched the Adventurer Feedback Board. Once we raised it however, several players mentioned that they preferred the look of certain outfits which were enhanced with the default long pants.

It was therefore decided that a “Choose your Underwear” box would be made available for 200 Loyalties for a short period of time. This will allow all Adventurers to pick up an underwear box, and for those who open it on their Shai, will give them the opportunity to hide the long leggings that currently persist beneath their costumes. We hope that this allows Shai players a greater sense of creative freedom with their outfits, and we look forward to seeing how they will deck out their Shai.

While this post gained a decent amount of support, the Black Desert team decided against removing the spawn notifications on the boss at Abandoned Monastery. The core concept of the boss here was to promote an objective that people could engage over. This event therefore was intended to be PvP centric, and as such, will not be changed.

The last post we’ll take a look at today is a controversial one. This post gained a lot of attention, with people falling either side of the PvP/PvE divide. While some commenters would like for PvE servers to exist, others state that a core principle of Black Desert is PvP.

This sentiment has been reitereated at previous balls, and once again the Black Desert Studio has stated that open world PvP is a core pillar of the game experience. Therefore there is no change to the official stance of the Black Desert team in regards to PvP disabled servers.

Topics under discussion mean that the topic has been lifted to the Adventurer Feedback Board, and that an answer will be on its way. Depending on the issue, these can sometimes be relatively quick turn arounds, or if they are complicated may take a bit longer. While we would like to offer answers as quickly as possible, sometimes a suggestion needs to be passed around a few desks before a complete answer can be reached. We of course would love to see further feedback on these topics so make sure your opinions are heard by upvoting/downvoting and commenting on threads in the Feedback Board.

And that wraps up this month's overview. Once again, we would like to thank each and every one of you who have posted threads, and also those who upvote and downvote posts that they agree or disagree with, for their participation in this process. If you have a suggestion, please make sure to drop a post in the Black Desert Feedback Board. If you’re not particular gifted at writing, you can still participate by upvoting and downvoting posts depending on your opinions. Participation is key to making this feedback system work, and we hope that you can help improve it.