“Artifacts,” the new equipment item, and “Lightstones,” items that give Artifacts additional effects, which were introduced during the last Calpheon Ball, were added.

Unlike the pre-existing gear that affects the displayed AP and DP numbers, artifacts and lightstones were designed to give Adventurers more choices that synergizes with their class and playstyle better. Artifacts have two lightstone-only slots and, when a certain combination of three or four lightstones are infused into those slots, an additional combination effect will be applied. It is similar to the current combined magic crystals like the Hoom crystals. There is a wide variety of combination effects to choose from, so there most likely will be something for everyone.

However, the effects of the combined magic crystals were fixed. Lightstones, on the other hand, provide different effects depending on the different combinations. Additionally, lightstones can be safely removed using Silver (via a vendor-bought item) which will make them much easier to experiment with compared to crystals.

Adventurers could “complete” their artifact collection by defeating monsters, however, lightstones require alchemy to bring out their full potential. The item “Imperfect Lightstones” can be obtained as loot for defeating monsters and rewards for various content. Then, the imperfect lightstones will need to be purified with Alchemy to uncover exactly which lightstone you've obtained, and even have a small chance of unearthing a second lightstone in the process. When we first presented lightstones during the Calpheon Ball, they were shown as enhanceable items. However, we decided this will be better for two reasons. First, we can lower the stress of needing to enhance another item. Second, this allows us to make major Life Skill content, Alchemy, even more meaningful. We also did add the option of paying an NPC (like Dalishain) with Silver in each of the major cities and towns to perform alchemy on the Imperfect Lightstones for Adventurers. However, this will be more expensive to do.
* Note: Artifacts cannot be registered on the Central Market. However, “Imperfect Lightstones,” “Lightstones,” and “Purified Lightstones” all can be registered on the Central Market.

Like we mentioned earlier, our intent with artifacts and lightstones is to create greater variety of item sets for our Adventurers. Most of the effects added in this update are based on pre-existing effects. We have future plans to add a wider variety of effects, like cooldown reduction of specific class skills and increasing damage during nighttime.

● Added the new equipment type items "Artifact."
- Characters can equip up to 2 artifacts and each artifact has 2 lightstone-exclusive slots.
- There are a variety of artifacts and each of them have their own effects. Artifacts can be infused with lightstones to provide the character with even more effects.
- Artifacts cannot be registered on the Central Market.
- Item Branding Scrolls can be used on artifacts.
- Artifacts can be divided into four major types of effects. Effect of the artifact will differ depending on its type.
- Artifacts affect the stats displayed in My Information (P) -> Battle Stats -> Combat Type.
- For more details on artifacts and their effects, go to [Adventurer's Guide > Artifact/Lightstone > List of Artifacts]. 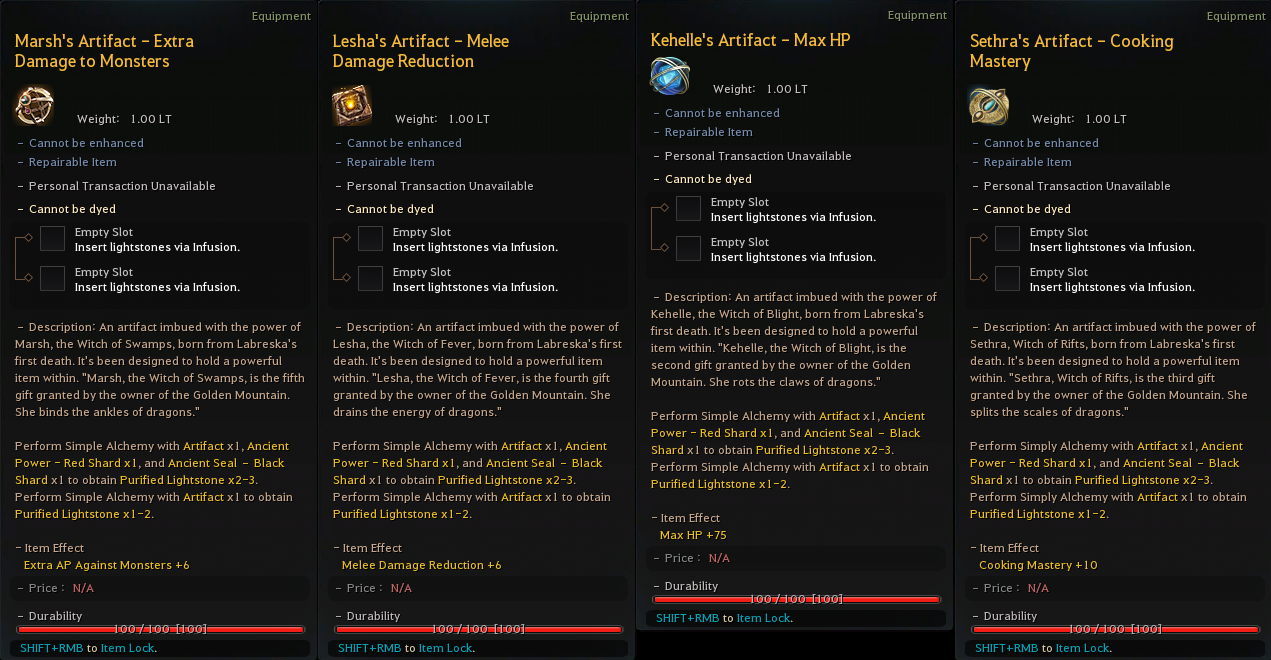 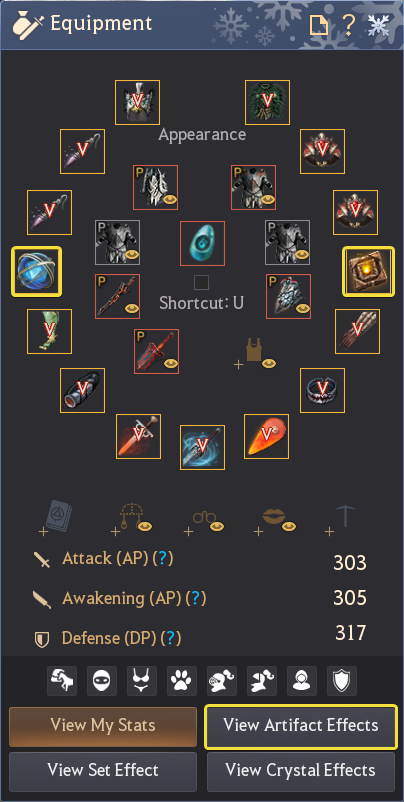 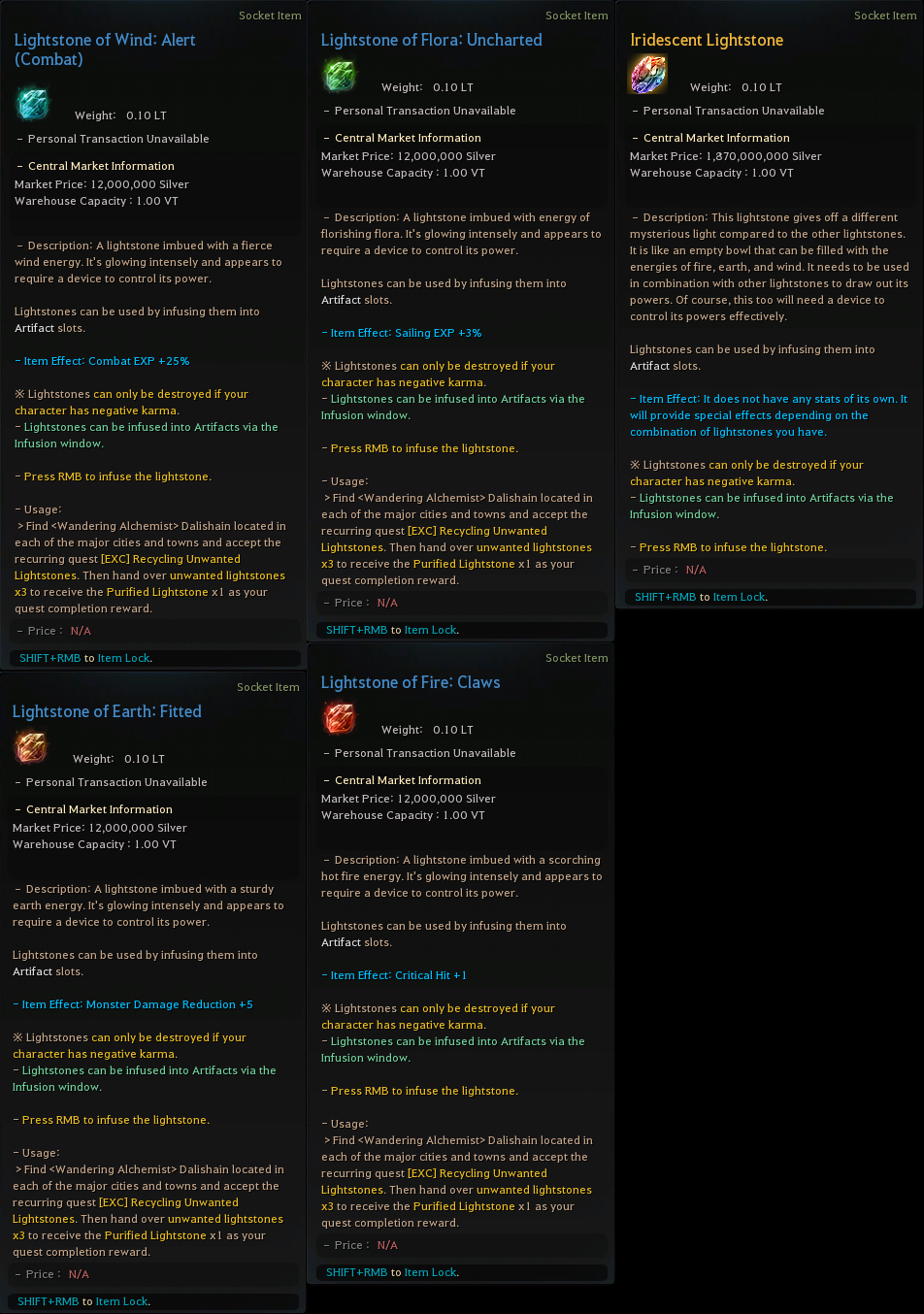 1. Find Dalishain in any city or town to transform your imperfect lightstones.
2. Install an alchemy tool in your residence and perform alchemy with your imperfect lightstones. (Requires Alchemy Guru 1 or higher)
* When you perform the alchemy yourself, there is a low chance that you can get an additional "purified lightstone" of the same type.
- You will need to open the purified lighstone to get one of the lightstones of the related type.
- You can perform alchemy via an alchemy tool installed in your residence by using the following materials (must be Alchemy Guru 1 or higher):

● Lightstones can be infused from the window that opens when pressing RMB on a lightstone in your Inventory or by going to ESC Menu > Character (F2) > Infusion. 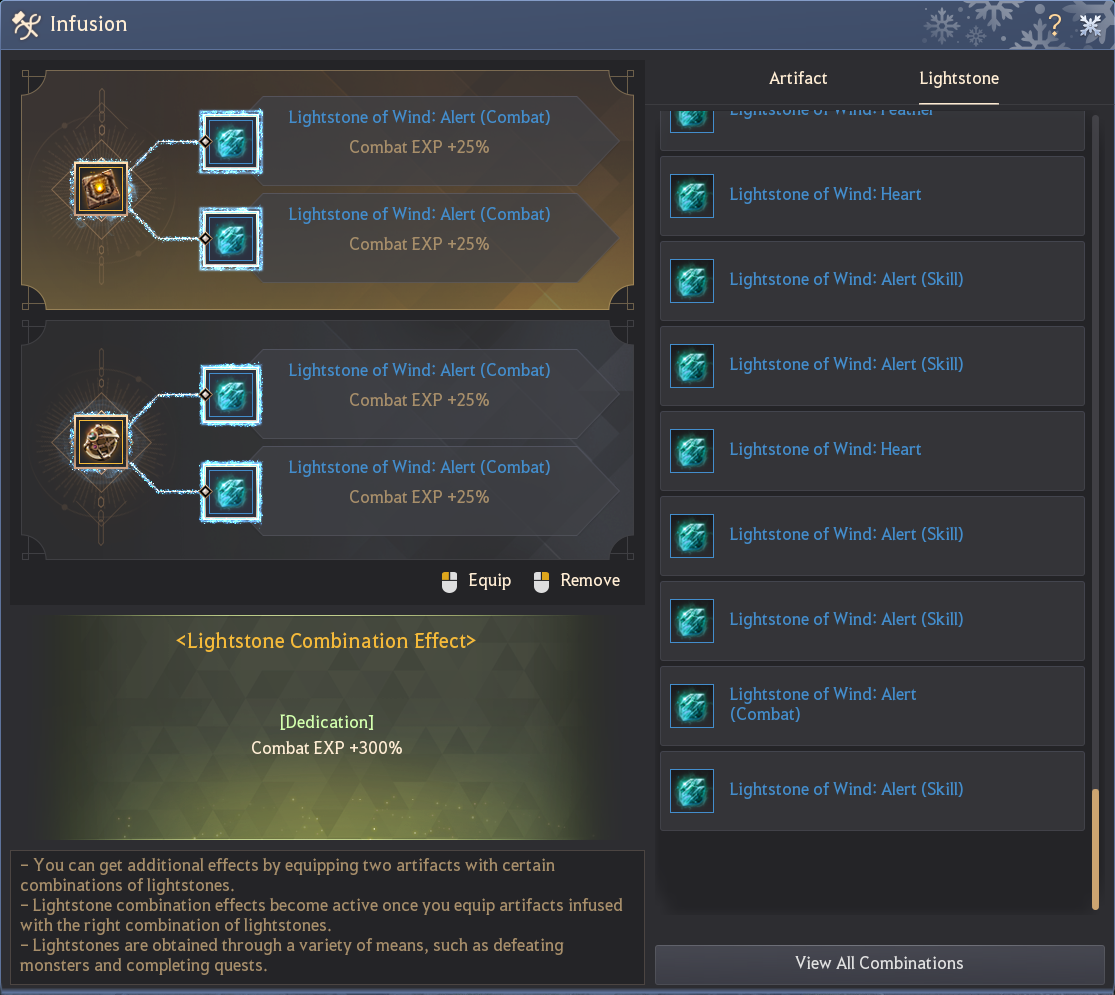 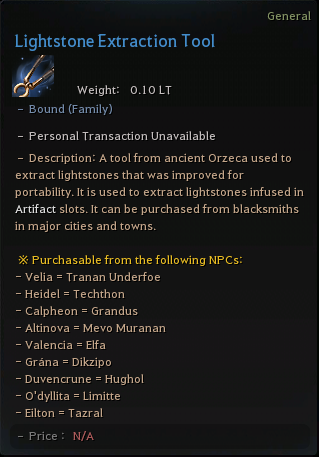 ● Due to soaring interest in artifacts and lightstones, Dalishain, the renowned wandering alchemist known to be able to make anything, announced the following research paper based on her studies of the topic.
* You can find the NPC Dalishain in the following major cities. Also, you can search via the FInd NPC function to see her location when you have the Knowledge on the NPC.

[#1 How to Purify Imperfect Lightstones]
● Complete the following once per Family quests with a Lv. 57 or higher character to accept and complete recurring quests that can be re-accepted instantly upon completion.
- You cannot proceed with the four recurring quests listed above simultaneously.
- Open the Purified Lightstone item you receive as a reward to obtain one lightstone according to a set probability.

[#2 How to Efficiently Re-Use Lightstones]
● Added an exchange quest from which you can obtain one Purified Lightstone by handing over three unwanted lightstones to Dalishain after completing the "Eureka! A New Discovery" quest.
- The following quest is a recurring quest that can be re-accepted instantly upon completion.
- Open the Purified Lightstone item you receive as a reward to obtain one lightstone according to a set probability.
● The Black Spirit has prepared a surprise gift for you, with the discovery of lightstones and artifacts that contain a variety of mystical abilities in the world of Black Desert. Talk to the Black Spirit (/) to receive your reward after proceeding with the following main quests and completing the quest objectives.
- However, all of the following 6 quests can only be accepted and completed once per Family.
* Each of the quests requirements for A Gift for Leaping Forward (I to IV) can be completed with characters under the following conditions via the main questline.
● Added the "[Bonus] Dalishain's New Route for Business" quest.
- There is a small chance of receiving this quest upon completing Imperial Fishing Delivery, Imperial Delivery (Trading), Imperial Horse Delivery, Imperial Crafting Delivery (Cooking/Alchemy).
- Complete the quest to obtain Sethra's Artifact or Imperfect Lightstone of Flora as a quest reward.
* However, you cannot accept any more quests if you already have 30 quests in progress.