"The Blackstar shall lead us all to paradise."

Hashashin is the one who has stopped the endless fragments of chaos from beyond Alyaelli, the gate north of Valencia.

He is the master of the sands who crossed the desert in search of the truth behind the Blackstar.

Hashashin is a melee & mid-ranged character who uses crescent-shaped Shamshir and Haladie which carries the power of the sand magic to become one with the sands and unleash unpredictable attacks.

He quickly disappears from the sight of his enemies to give them mortal strikes or creates an endless sandstorm to confuse them.

With his smooth yet sharp movements, Hashashin fights his enemies unceasingly

without ever being consumed by the sands himself.

Start a new adventure in search of the truth behind the Blackstar with Hashashin. 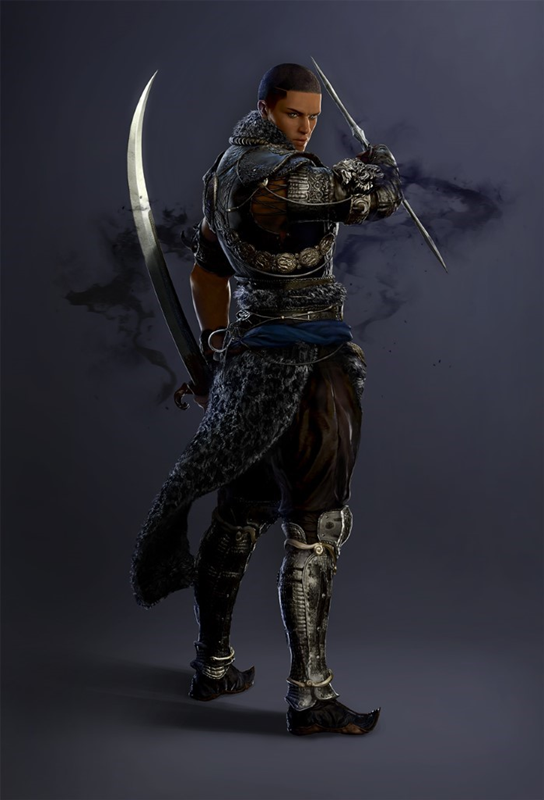 "The Blackstar shall lead us all to paradise.

Until then, we will watch out for the darkness from this place

and continue doing so to our very last day."

That was the one tenet that, along with the scattered crimson ashes, he and his comrades have surrendered to for their entire lives.

However, three years had passed since the Blackstar fell in the far-off lands of the west

yet the paradise the aged teachers desperately yearned for would never come to pass.

Only those endless monsters creeping out of that black pit were still suffocating him.

"Hear me! For I am the curved blade of Aal,

the master who shall unleash his raging winds and sands."

Because only he was able to slash the chaos, he endured the fierce training and the bodies of his fallen brothers littering the battlefields through faith alone.

The one who broke the flow of these filthy days was none other than a foreigner named Kayal Nesser.

The son of a concubine to the Nesser Royal House of Valencia and also next-in-line to be the "One at the End" or Qabal's successor, an old comrade with whom he had stopped the fragments of chaos for a long time, ran away.

"The Blackstar does not descend upon us for there are those among us who lack the faith.

The souls which can reach paradise are the ones awakened to the horrors of the battlefield.

In the end, Kayal failed to wash off the blood of a hypocrite from him."

He was pushed to the blood-covered battlefield as he had always been, waiting for redemption, but his doubts did not cease.

when everyone else in the world calls it the Blackstar?"

The flame of suspicion, once ignited, could not be extinguished.

The desertion of Kayal, the existence of the monsters, the definition of redemption, the identity of the Blackstar.

At the end of all his questions, there was only suspicion about his teachers' lessons and the truth kept within the Scripture of Aal.

In the end, he secretly boarded a boat that went to the mainland and a black energy that had been watching him for a long time started to draw near him, with its red eyes shining.

An attack that quickly advances forward and slashes the enemy.

Your movement is so fast that the enemy is slashed in the blink of an eye.

Wrap the body in a fierce, whirling tornado, then quickly spin forward to sweep everything.

The enemy who has been caught by the tornado will be sent flying.

Memorize your current location within the sands and call forth a gust of sand.

You can return to the memorized location as long as the sands' memory is preserved.

Draw forth the haladie's energy to create a giant sandstorm.

Create flowing sands which absorb everything around them.

Empower the Shamshir with the Haladie's power and release this energy to the ground.

The sandstorm created with the Haladie's power sweeps all surrounding foes.