In this guide I will talk about Guilds, their meanings, activities, perks! If you have never been in a guild before, this is where you get all important informations!

Guild is social community of people interested in same goals and activities in Black Desert Online. There is hundreds of PvP, PvE, PvX, Lifeskill, Sailing oriented. You just have to find the right guild for you!

Why would I join Guild?

Friends! Money! Group content!  Every Member has it´s own contract with Daily Pay, which can be claimed everyday. Daily Pay can be from 15K silver to 5M silver per day! that´s 150M silver per month just for logging in! Guilds also provide with group content such as Guild Missions, Guild Bosses, anything you decide to do as group!

To create a guild you will need 100k silver and talk to a Guild Manager NPC . 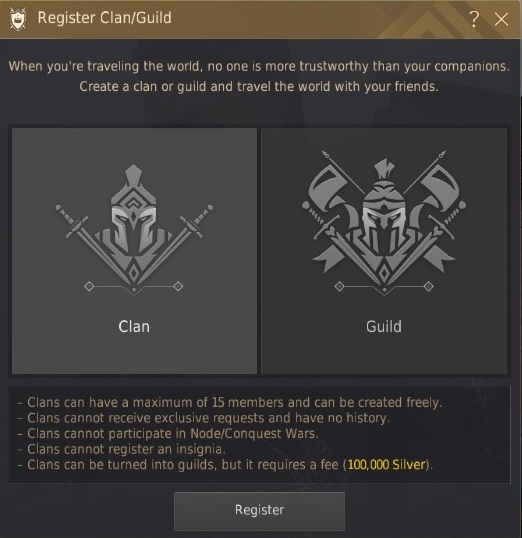 Guild names can have up to 10 characters and can not include swear words or special characters. You also will need to upload your Guild Icon, in order to do so, you will need to buy a [Guild] Emblem Certificate from the Guild Manager NPC.  Guild Icon can be changed  only on Mondays.

Guilds start off with 80k silver in the guild bank. These funds can only be controlled by the guild Master/Advisor and can not be used for personal use.

Every Member of the Guild has it´s own contract. Contracts include Penalty, Term and Daily Pay. You can start off with 1 day contract up to 365 days contract and 1k Daily Pay up to 5M (same applies for Penalty). Once the Term runs out, member is not getting any buffs, bonuses and cannot participate in Guild Missions. 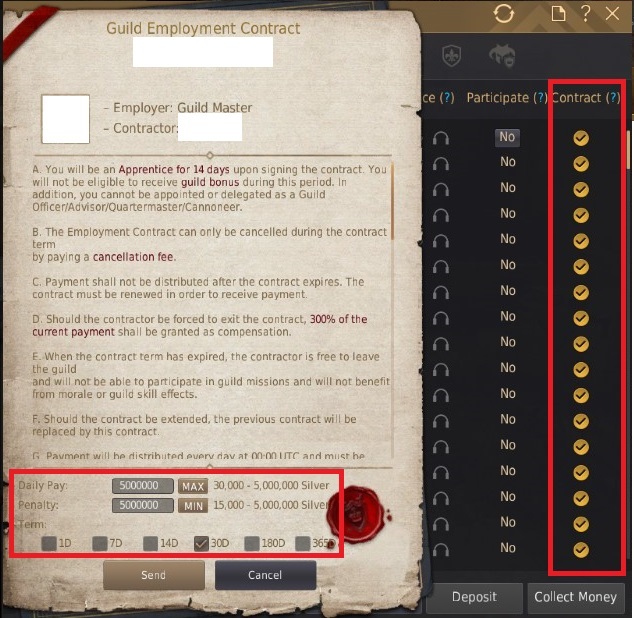 Contract can be renewed 24 hours after they were given  by Guild Master/Advisor/Officer.

Given automatically when first joining the Guild

Lasts for 14 days, then automatically turns into General

Cannot receive Guild Payout, can´t get promoted to any other rank

Normal Member of the Guild

Ranks given for Node Wars matters.

Can install annexes, use cannons for Khan Guild Boss.

Has the same Permissions as Guild Master except Advisors cannot disband Guild or Destroy Guild Mounts.

- Change the Guild name or Emblem

- Bid on a Guild Auction House

- Recruit members and promote them to higher ranks

- Learn Guild Skills and use them

- Give members protection buff and set the capacity

- Use the guild storage

Each Monday  a support payment is automatically given to the guild.

The larger the guild size, the more funds will be paid to the guild.

Guild support funds are only paid if there are more than 10 guild members online.

However there is also tax for having too much Guild Funds. Tax will be taken each  Monday depending on the amount of Silver in Guild Funds

Guild Bonus Payout  is only available for guilds with at least 30 members (excluding apprentice members). The Guild Bonus can be used weekly (resets every Sunday at 00:00) and must be between 10% – 40% of the total Guild Funds. If the bonus is over 500 million, then a 50% tax is applied. If the bonus is over 1 billion silver, a 70% tax is applied. 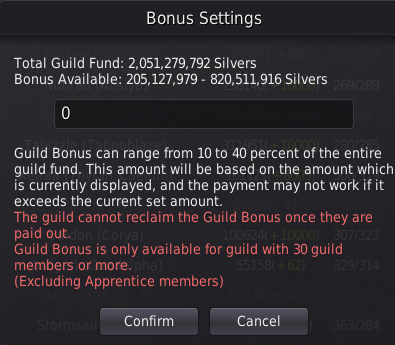 Once you have selected your Bonus Payout, you can distribute it to members in your guild. Each member can be set a level between 1 and 10 and this is used to calculate the amount of silver each player receives. The higher level, the higher cut they receive out of the total bonus.

All members (excluding apprentice members) will be paid.

In the Guild Member Status window, there are two numbers in white and green which indicate a members activity points in the guild.

Guild Missions are quests exclusive for Guilds. Only Officers/Advisor/Guild Master can accept them, but everyone is able to participate (as long as their contract is not expired). There are 3 groups of Guild Missions:  Combat, Life, Trading

The available quests will change every 10 minutes and are different on every channel. A guild can only take maximum of 10 misisons a day and must be online to accept and complete them. You can only do one guild mission per channel at a time.

Guild members can gain individual rewards by contributing towards a guild mission. Guild activity is earned to upgrade your guild contract, and you can also earn extra silver depending on your contribution to the mission.

For the silver reward, you can obtain up to half of the silver of the guild funds set for guild mission rewards. The silver will be divided between all the guild members that participated. This silver reward is deducted from the Guild funds and can be collected using the “Collect Wage” button on the Guild Missions tab.

Each time a guild member earns Contribution experience or completes a guild quest, the guild earns experience as well. When the guild levels up, the Guild Master can invest points into guild skills and unlock them.

There are passive skills which are applied immediately (+AP bonus, +3 Fishing, +100HP, etc) and there are also active skills which require an item called “Pledge of Blood”. The item can be bought in the guild store for 3k silver each and can only be used by Guild Officer and up. All members with an active guild contract will receive the buff as soon as points are put into the skill. 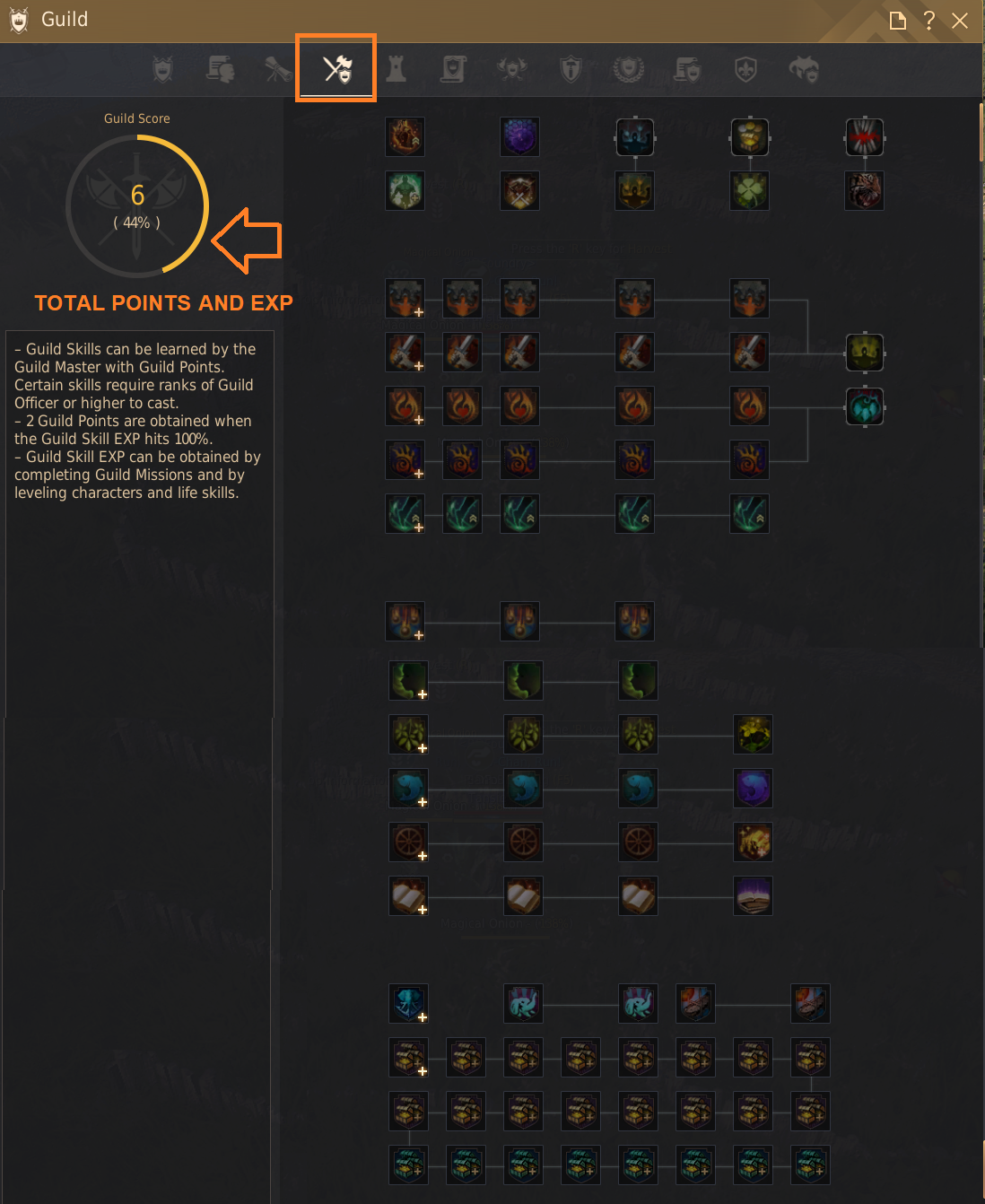 Guild Houses are obtained by participating in the Guild House Auction.

A guild house auction takes place every 2 weeks on Fridays . The auction lasts 24 hours and the guild Master must place a bid at the Guild Manager NPC using the guild funds. You can place up to 3 bids but it is a blind auction, meaning you can’t see what price other guilds have set. If you are the highest bid, you will get a message saying “Your bid of x Silver has been placed as the highest bid”.

Owning a guild house allows you to:

Accepting Boss Subjugation Guild Missions depends on the size of the Guild. If Guild size is Large, guild can activate only Large, not higher nor lower. Keep this in mind to avoid any missunderstandings with members and officers. 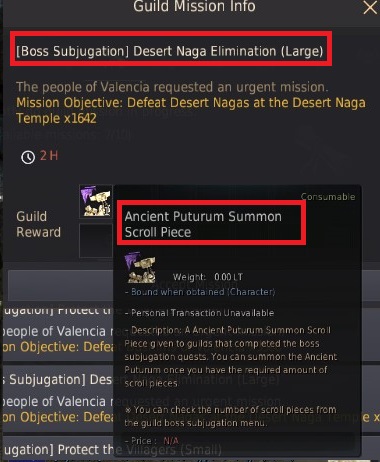 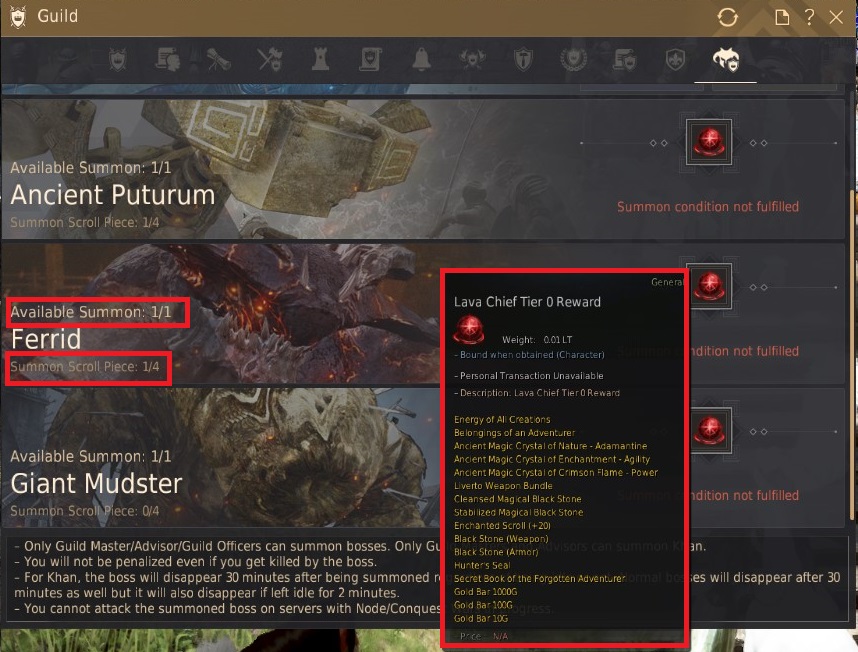 There are of course more PVE activities that can be organised such as Khalk or Blue Whales Hunt, Fishing trips and of course I cannot forget to mention trip to Vell with Guild Galley!  But this is of course up to the guild and managment what they plan to do!

Guilds can own and fight over Nodes and Regions to control them and will earn silver for controlling a node. These are known as “Node Wars” or “Siege Wars”.

To compete for a certain territory, a guild must build a fort inside the node territory. The Guild Master or Officers can buy the design for the tower at a Guild Manager NPC.

The winning guild of a Node War is the last to have their siege tower still standing. The guild will then receive the bonuses of controlling a node until the next Node War begins and they will automatically take part to defend their node.

To participate in a Node War/Seige, each member must change their “Participation” to Yes in the guild member list window. Afterwards, you can collect your reward by clicking “Collect Reward” at the bottom of the window. You will receive Shining Medal of Honor x1 – x5 depending on if you win the war or not. These can be exchanged for various items.

If you have space in your guild for more members, you can hire “War Heroes” to fight for your guild during Node wars and conquest wars and receive rewards. For example, an Extra large guild that has 80 members can hire a maximum of 20 War Heroes, which means it cannot exceed the maximum of 100 members total.

When you join as a War Hero, a certain percentage of the guild funds are given to you as a down payment (up to 10 million silver) when you leave the guild. If you win, a victory reward will be given as well (up to 20 million silver).

Members can leave their Guild at anytime they wish to. However there are some Penalties in certain situations.

If member is kicked :

- while having active contract, Guild must pay 300% of Daily Pay

- while having expired contract, Guild doesn´t pay anything

- while having active contract, Member pays Penalty which amount is written on the contract

- while having expired contract, Member doesn´t pay anything

After leaving a Guild, there is 24 hours cooldown before you are able to join another guild!

I hope this Guide helped you to understand how Guilds work and how much fun you can have!

If you are new to the role of Officer, don´t forget to check my other guide exclusive for Officers – Guide for Guild Officers!

Have fun with your fellow Guild Mates!

This guide is extremely well-written and it motivates me to join a guild, I hope my friend comes along too.

This guide is extremely well-written and it motivates me to join a guild, I hope my friend comes along too.

thanks for your feedback! I am happy that this guide motivates you to join one guild too ^^ I for sure recommend it! If you find guild that suits you perfectly, I am sure you will not want to leave them :)

PS: haha thanks :D I changed that

Hope you have a wonderful day and find the perfect guild for you and your friend!

I have a very small guild and I am looking for information on the Daily contract payouts. I was previously in a larger giuld and to collect the larger daily pay (5mil/day) we had to have at least 10 active players on line, is this still in effect? Is it listed somewhere the stipulations that need to be met in order to get certain daily payouts?

Mostly I want to make sure my guildies are getting the maximun they can without having to rely on making sure everyone is on line! *We do not even have 10 active players!

Thank you in advance for ytour guidance :)

I have a very small guild and I am looking for information on the Daily contract payouts. I was previously in a larger giuld and to collect the larger daily pay (5mil/day) we had to have at least 10 active players on line, is this still in effect? Is it listed somewhere the stipulations that need to be met in order to get certain daily payouts?

Mostly I want to make sure my guildies are getting the maximun they can without having to rely on making sure everyone is on line! *We do not even have 10 active players!

Thank you in advance for ytour guidance :)

Hey!  Daily payouts that are over 1M silver can be received only if 10 members are online at the time. So unfortunately yes this is still in effect.