Suggestion/Comments: Right now there are sitting way too many Dolls in the central market at the lowest price. You cannot add the profit of these dolls from your grinding sessions in Kamasylvia, since they will never sell at all. I think the Voodoo Dolls should give memory fragments and be valuable like the "Scrolls written in Ancient Language", since Valencia spots are very profitable anyways. Also memory fragments are in need all the time, especially for newer players which work on their Safe PEN items from the Jetina Quest.
Having items in your grinding item pool that wont sell at all does not make sense to me. There might be a few players which do these dolls, but many Content Creaters tested these already and the profit is not that high, which wont be appealing to the majority of the player base.
A change to the loot table of these Voodoo Dolls would increase its sells and they wont get dusty in the central market anymore.
Edit: Since many players including myself are not satisfied with the Boss itself, my suggestions would be the following:
1.) Let the Boss stay like it is, but increases its loot significant (including memory fragments).
2.) Make the Boss more easy like the Pila Fe summoned bosses and changes it loottable , similiar to Pila Fe scrolls.
3.) Let the players choose if they want to do it as party (like Pila Fe) or do it solo, change the boss accordingly.
4.) The summoning process of all the scrolls takes way too long. A change would be needed aswell, especially for the easier bosses you spam a lot! Also remove the quests for it, just let the loot orbs drop from the boss itsself and your pets can collect it.
5.) A lot of players stated that players could make too much silver out of the old ones if the new ones become valuable again and that it could cause inflation,

my suggestion would be that they make an improved version of these and people that stacked the old ones can use simply alchemy i.e. to combine 5 of the old ones to a new one with more profit and the ones that are already registered in the CM get removed. Players that put them in before the buff would get them in their ingame mail after the change and they wont be sellable anymore.

The Boss mechanic itself should be like the Pila Ku Boss mechanic but spammable / easier to summon. Also it should have the group method, where the boss is much harder which should reward players in a party with for example 10% more Loot than doing it solo. This way players would form groups more frequently for this and get rewarded more. 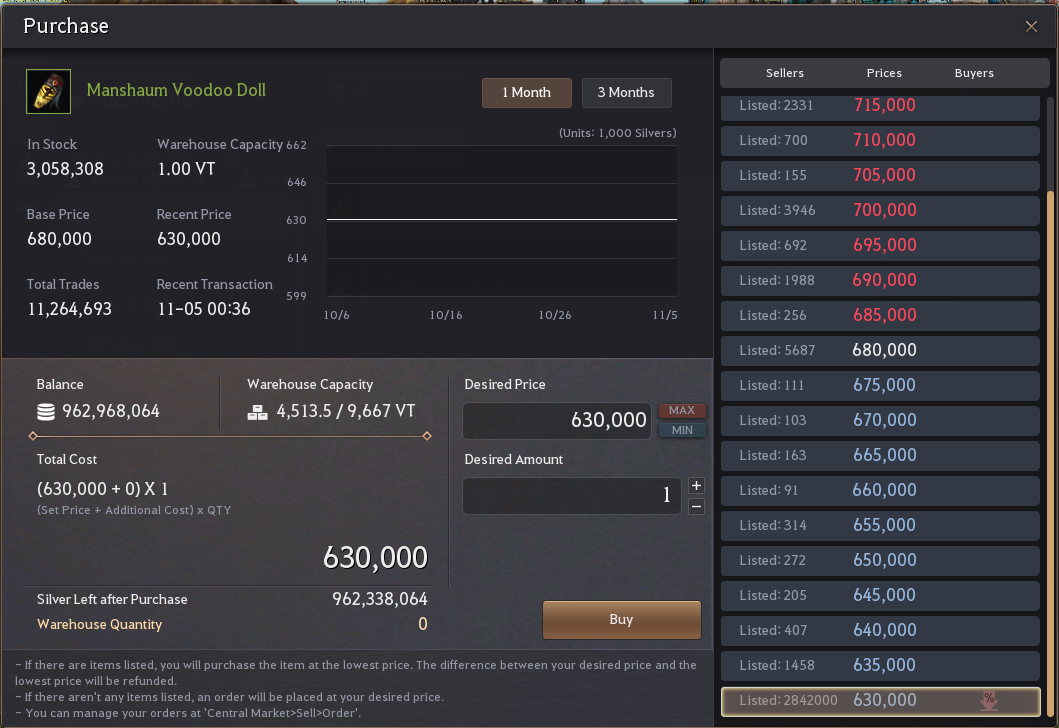 Yeah or they could just delete these pointless items, we have more than enough boss scroll items already...

Yeah or they could just delete these pointless items, we have more than enough boss scroll items already...

Well i get your point but if you look at valencian spots, the scrolls there are easily sellable and you get much profit of it, while these dolls in kamasylvian region are worth nothing. If PA removes them they should add other things which add up to the grinding profit atleast. But i think if you will get lot of memory fragments from these voodoo dolls , then they would be valuable again, because many players need these memomory fragments , i.e. Jetina Questline where you need like 1000. Right now they are on highest price and you can only preorder.

PA nerfed loot from this boss, and additionally increased difficulty. Yes, he won't kill us (he deals too little damage in solo mode), but he has a huge amount of health and def. You practically have to attack his back all the time so as not to get bored with this fight to death.

Especially considering that this fight is a grind ball ache compared to the other scroll fights. Pila fight is couple of hits for loot, biggest grind on that is waiting for it to spawn

PA nerfed loot from this boss, and additionally increased difficulty. Yes, he won't kill us (he deals too little damage in solo mode), but he has a huge amount of health and def. You practically have to attack his back all the time so as not to get bored with this fight to death.

Yeah i agree. If the loot would be atleast decent... Check my Edit above. Might be a solution to it.

Especially considering that this fight is a grind ball ache compared to the other scroll fights. Pila fight is couple of hits for loot, biggest grind on that is waiting for it to spawn

Yeah true. The spawning time of these scrolls is annoying too. See my Edited post.

I agree these need a major buff. I was excited when they made a party version, thinking it would be very worth it like the other scrolls, but it's not.

Occasionally I torture myself by running 20-30 at a time. The only reason I do is for dream horse mats (the only other way to get peggy mats outside farming)...otherwise there's no point. They're a profit loss for the time it takes even in solo mode. The stone shard frags are useful for very specific things like Krogdalo, but you get so few of them it's not worth it, over just grinding.

If they buffed accessory drops significantly, it could be good profit, but otherwise, something else needs to be added. Mem frags, caphras, something.

Am totally for it, I've been sitting on them for years.

Displays posts with many Likes or those that are being discussed or trending in the Feedback forum.