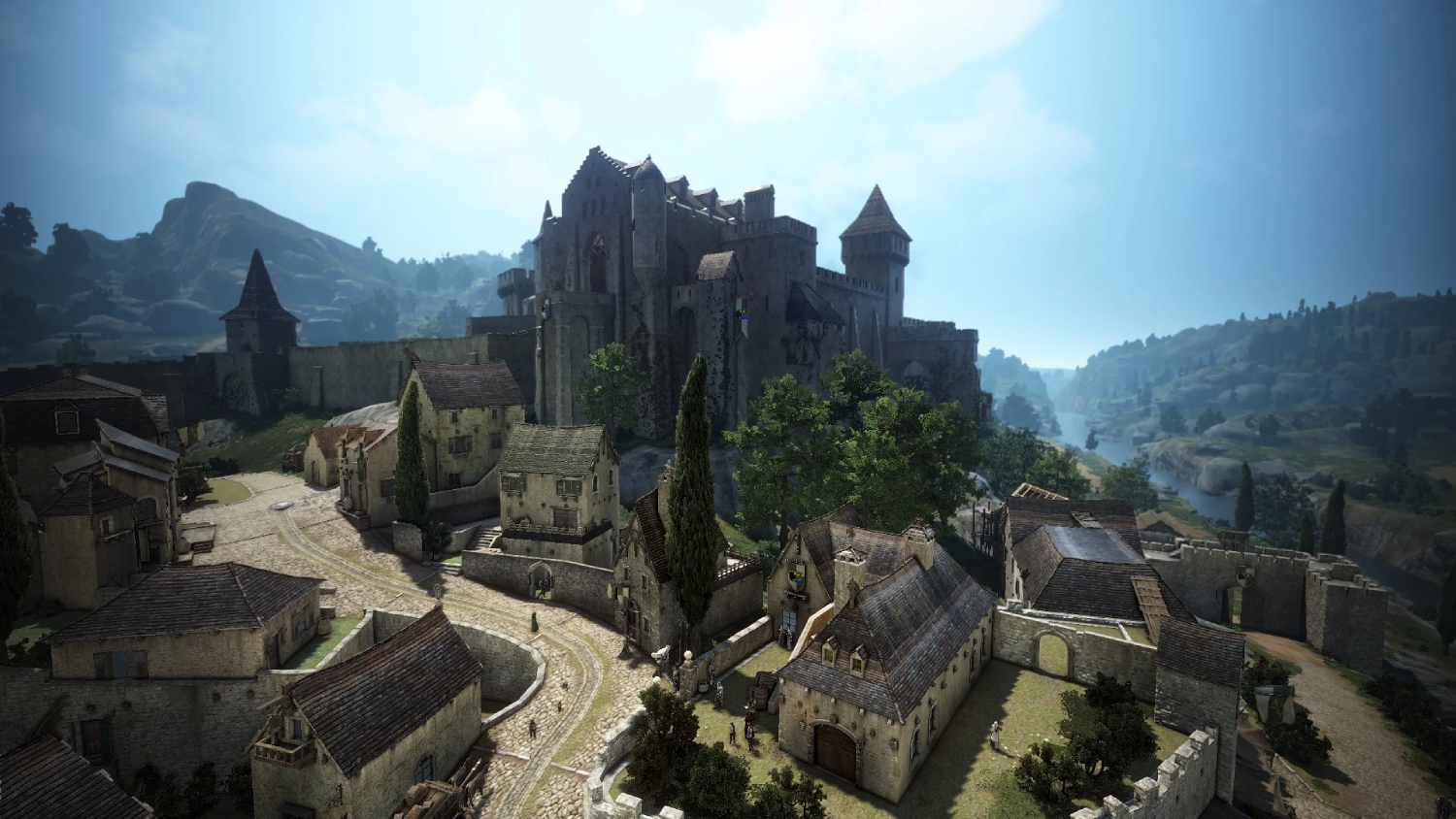 Crucio Domongatt found no reason for war. He did not view himself as a servant of Elion unlike his father. Though commoners seemed to have recovered from the restlessness of war, Crucio was not pleased with the way King Dahad treated them.

Crucio was crowned King of Heidel when he was 27 years old, and announced to Calpheon that they would not be assisting in the expedition. The priests of Calpheon were frustrated with the situation,
and they feared that they would lose their influence if the expedition came to a halt. There were Elion Chapels wherever the expedition went. The priests originally planned to spread Elionism all throughout Balenos. The priests criticized Crucio’s decision, but Dahad remained silent. King Crucio carefully reviewed his options. He knew waging a war against Calpheon would be unwise, as there were many followers of Elion in the Heidel military who remained loyal to his father. After countless meetings Crucio failed to make any headway. he was unable to overcome the pressure and reluctantly agreed to the wishes of Calpheon. Dahad welcomed King Crucio’s decision, and suggested Crucio should prepare an expedition to see Valencia Castle. This took 2 years to prepare.
Domongatt already knew the road to the Black Desert like the back of his hand. However, a powerful wind blew all across Mediah making it difficult to travel. Sand storms also made it difficult for the expedition to advance. The expedition hid and waited for the wind to die down, though it was a week before Mediah even became visible.

Although they heard stories from the merchants, no one realized how much Mediah had changed. Walls armed with soldiers surrounded the city and dark black smoke rose up from within. Dahad ordered the expedition to pick up the pace so there would be no delays in the distribution of supplies. As the long line of expedition soldiers marched in the Black Desert, strong winds began hindering their path, and they noticed that, quite mysteriously, there were raindrops in the wind as well. Why would there be rain in the desert?
That’s when one of the soldiers saw a red flag in the distance, signifying they were near a Valencia camp. The expedition had entered the Black Desert. The Elionian priests that accompanied the expedition looked up to the sky and prayed. They built the camp despite the strong wind to confront their old enemy. Shortly after, darkness covered the land and a rainstorm came upon them. Dahad was missing when Crucio awoke from a hole in the sand. A red flag sat in tatters next to him, perhaps indicating that Valenica had taken a bigger beating than they had.

What about the expedition? Despite the significant loss, Crucio was glad to be alive. Dark clouds started to form around their position once again. Crucio and the remaining survivors hastily retreated. However, the frequent sandstorms that battered them made it difficult for them to return. In addition, the waters from the Demi River rose to abnormal levels, effectively blocking their path. A month had passed before a large river delta formed, allowing Crucio to cross the Demi River. The defeated soldiers were exhausted from the disastrous event that marked an early end to their expedition. In spite of this, the religious body of Calpheon adorned the soldiers with awards. They made claims that Calpheon secured great victory and utterly defeated Valencia. In truth, this may have been what they needed after such a disastrous event, and this did not affect Heidel Castle and Serendia much at all. However, the wetlands increased in the southern areas.
Nature’s wrath had put an end to the war, something that man could not do on their own. Peace came, allowing those affected by the war to recover. After the loss of their king, Calpheon crowned the young Guy Seric as its successor.

The Heidel merchant guild traveled to Mediah, impressed with how much the city had changed 7 years after the last expedition. Domongatt read the reports from the merchants and ordered them to find out what allowed Mediah to develop so quickly. They soon discovered the significance of the black crystal.
Domongatt later rushed to the wetlands upon learning that the small pebble the young Nagas held were actually black crystals. Domongatt strongly believed that the black crystal was the key to Heidel gaining political independence and free itself from years of suffering under Calpheon. However, what lay ahead of Domongatt was only misfortune.

After securing victory over Keplan, the armies of Calpheon attacked the area near the Heidel watchtower. Heidel had a powerful, well-equipped military. As evening settled, Guy Seric ordered his soldiers to attack Heidel Castle, and an unsuspected ambush made for a quick defeat for Domonogatt. Domongatt dreaded capture, but he nonetheless refused to surrender. Domongatt told the Calpheon emissary that he would rather face death than defeat from his enemy. Cliff and his soldiers established a defense line in Keplan and Armstrong led his soldiers along the Demi Stream to attack the Calpheon soldiers. In response, Guy Seric deployed his heavy cavalry to the battlefield. Both sides suffered heavy losses as the war between Calpheon and the two brave generals raged on. Calpheon knew that even if they were to secure a victory, the casualties from this battle alone would rival the total casualties the Black Death itself.

Guy Seric realized that the purpose of this war was to gain control of the black crystals. As a result, instead of surrendering, Guy Seric offered a proposal. Although it would ensure Domongatt escaped death, he was hesitant, but eventually conceded to Guy Seric's demands. Domongatt was able to return to Heidel a year after the conditions of the proposal were met. The citizens of Heidel understood the reason behind Domongatt’s decision, and Cliff and Armstrong respected Domongatt’s decision to move the camp from the main watchtower to the southern area. There were those who dismissed Domongatt as a coward, but he was unfazed by it. Instead, Domongatt was more concerned about the extraction mill constructed by Calpheon in the wetlands of Serendia. It was around this time when Domongatt starting becoming mysteriously ill.

Uneasiness settled in the western continent with the abrupt death of Guy Seric. The officials announced that Guy Seric died from terminal illness, to the suspicion of many. They thought no healthy, young man would so easily succumb to illness, especially the king. Rumors started going around that Guy Seric was actually poisoned. Regardless, Crucio saw the sudden death of Guy Seric as an opportunity. Internal strife and power struggles would weaken Calpheon’s influence. Crucio arranged a meeting with Cliff, the captain of the Western Camp, in regards to terminating the treaty. Cliff was uneasy about Crucio’s plan, stating that tensions between Calpheon could immediately escalate if this was not handled with utmost care. The high chamberlain Jordine joined their conversation as well. Cliff recommended Jordine after hearing the news about Crucio’s illness. Jordine had a good sense of judgement and helped greatly in managing internal affairs. Jordine stated that the power struggle was not for the throne, but between the Church of Elion and the merchants loyal to it. Jordine added that Heidel would not have any influence over Calpheon’s political affairs. Crucio agreed with Jordine, but he decided to listen to Cliff’s suggestion and observe the situation. The Calpheon council quickly the resolved the political tension and pushed for reforms, effectively establishing a new Calpheon that was more powerful. Jordine also became the Grand Chamberlain at 25. Jordine lost all of his family members to Calphone soldiers that pillaged his town. Due to this, he sought revenge and enlisted in the military, leading to his eventual promotion to chamberlain. He was tasked with handling all internal political affairs, and functioned closer to a prime minister. When Calpheon built an extraction mill, King Crucio demoted himself to the title of Lord in defeat, stating he failed to carry out his responsibilities as a king. This is also the reason why Cliff was demoted a rank from general to a captain. Jordine assured Crucio that the Calpheon would eventually lose its power within 5 years. He posited the power struggle between the merchant guilds will continue, and the Church of Elion will focus on increasing its religious influence, which will eventually exhaust Calpheon’s financial system. Jordine persuaded Crucio that they must take this opportunity to collect more taxes to strengthen its military, while Crucio felt this to be the right time to rebuild Heidel Castle.

The peasants took up arms and rebelled--taxes didn't even change like this after a bad harvest! Barbarians had also recently grown violent and damaged many of the harvestable crops. After observing the changes in Calpheon, Al Rhundi went to the castle as a representative of the peasants. However, the lord forcibly imprisoned Al Rhundi and tortured him. After a few days in captivity, they released Al Rhundi at the Neutral Zone. The peasants were furious. However, they knew they could not fight head on with well-equipped, battle ready soldiers. The peasants fled en masse when they saw the soldiers, and others also refused to go back to their daily lives, including Al Rhundi. he eventually became the leader of the rebellion and had to hide in the Castle Ruins for protection. The situation worsened and Jordine found even more reason to increase taxes. However, the rebellion from the peasants was not the real reason Jordine decided to increase taxes again. A light from the sky fell to the ground that same year. Soon after that incident, enraged monsters appeared and went on a rampage among the barbarians. There were reports that rocks began to move as well. This was known as the Tower of Will incident.
It’s been said that the ancients experienced a similar event when they initially built the Tower of Will.

According to the rumors, the number of outsiders increased greatly in Velia.