Node is an essential element for trade and production.

Nodes should be connected first to proceed with trade and now you can organically enjoy a number of interrelated contents such as gathering various ingredients by sending workers etc.

In order to connect Nodes, you will need to invest Contribution Points, so make sure that you have good management of it.

If a town and another town are connected, you can send items on a Loop Wagon.

You can send items or sell trade goods even if Nodes are not connected, however, you will suffer a loss by Transport Fee being tripled or sales price being 30% lowered.

Nodes are largely divided into Exploration Node and Production Node

Exploration Node is the node you can invest with contribution points, depending on features, is classified into six categories: Central Town, Town, Trade, Gateway, Danger Zone, and Empty Node.

Central Town and Town are Safe Zone, the rest are Combat Zone.

Production Node is a Satellite Node affiliated to Exploration Node. There are 4 types of Production Node where you can collect materials: Farm, Mining, Lumbering, and Excavation.

The features you can make good use of in each Node are as follows:

In order to invest in Exploration Node, there should be other surrounding nodes you have already invested.

But, large cities such as Heidel or Glish etc are available right away even if surrounding nodes are not invested.

For Danger Zone and Empty Node, there are cases where an object plays the role of Node Manager.

How to invest in Node

You can invest in a node by contacting Node manager.

However, in order to invest in a node, you need knowledge of the corresponding region, and there should be ‘surrounding node’ already connected to the node you want to make a connection.

If you don’t have the knowledge, even if you meet the manager, the 'Node Management' menu won’t show up.

The knowledge of the corresponding region can be learned by Node manager or through discovery of the region.

If you right-click the Node icon in the World Map, light pillars will indicate all the nodes you can invest and connect to the corresponding Node.

The nodes you have already invested will not show up.

Therefore, you can easily connect a Node by navigating to the location and make the discovery of new area, then find the manager near the point.

Sometimes the manager requires some preconditions such as amity points, so please look around the contents closely. 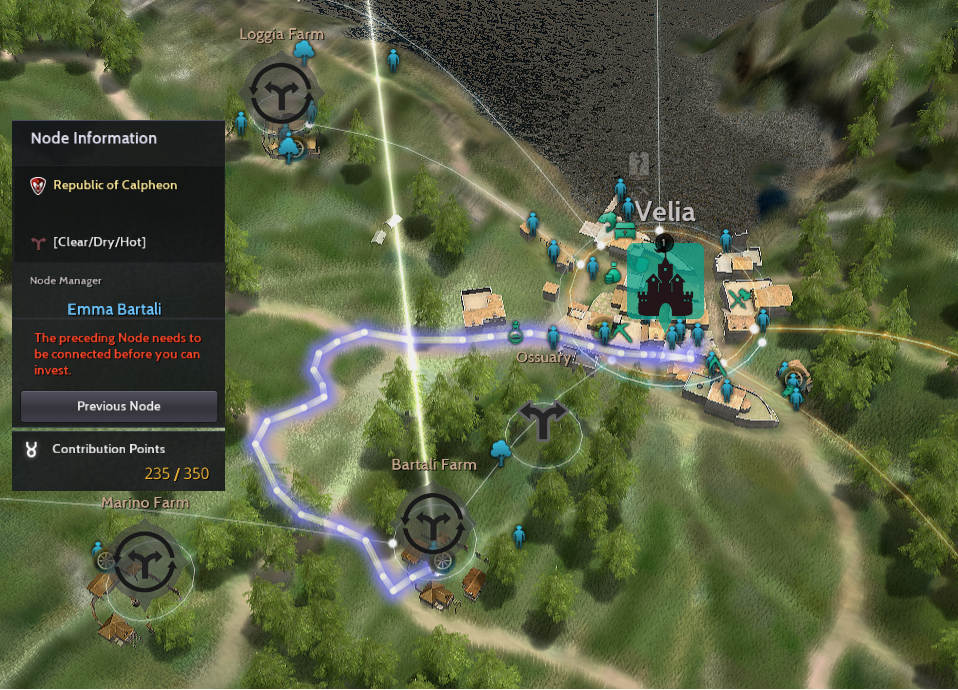 ▲ Click Previous Node to indicate the surrounding node you have not invested.

The Node connection seems to be a bit complicated, but it's easy to learn once you actually do it.

Because you already have the knowledge of the Bartali Farm Node adjacent to Velia town, there is a white line between Velia and Bartali town.

In this case, you can immediately go to the Bartali Farm Node Manager and make investment in the Node. 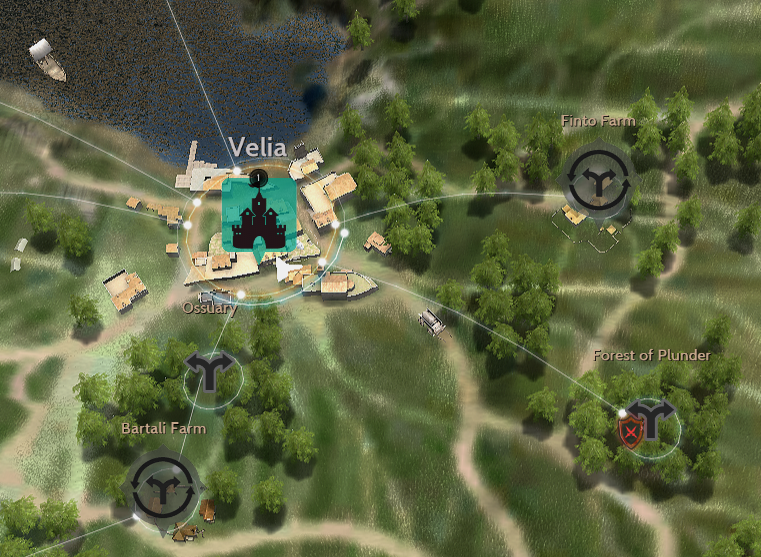 ▲ If there is a white line between two nodes, it means the adjacent node can be invested with contribution points and connected with each other immediately.

Go to the Bartali Farm on the World Map and find the NPC labeled .

The Node manager at Bartali Farm is 'Emma Bartali'.

It is not hard to find the Node manager because there is a Flag object around the NPC. 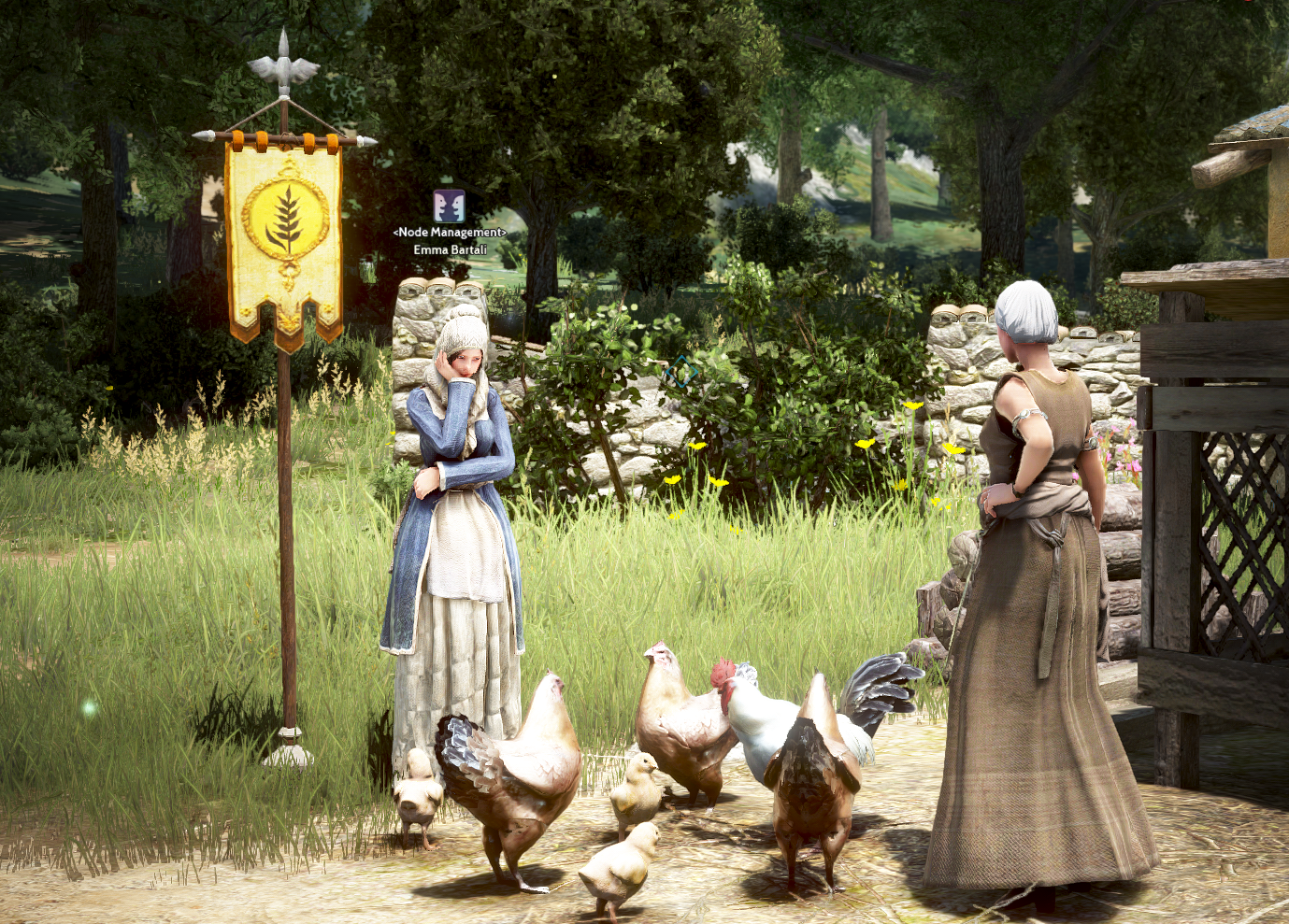 ▲ It is not hard to find the Node manager because there is a Flag object around the NPC. 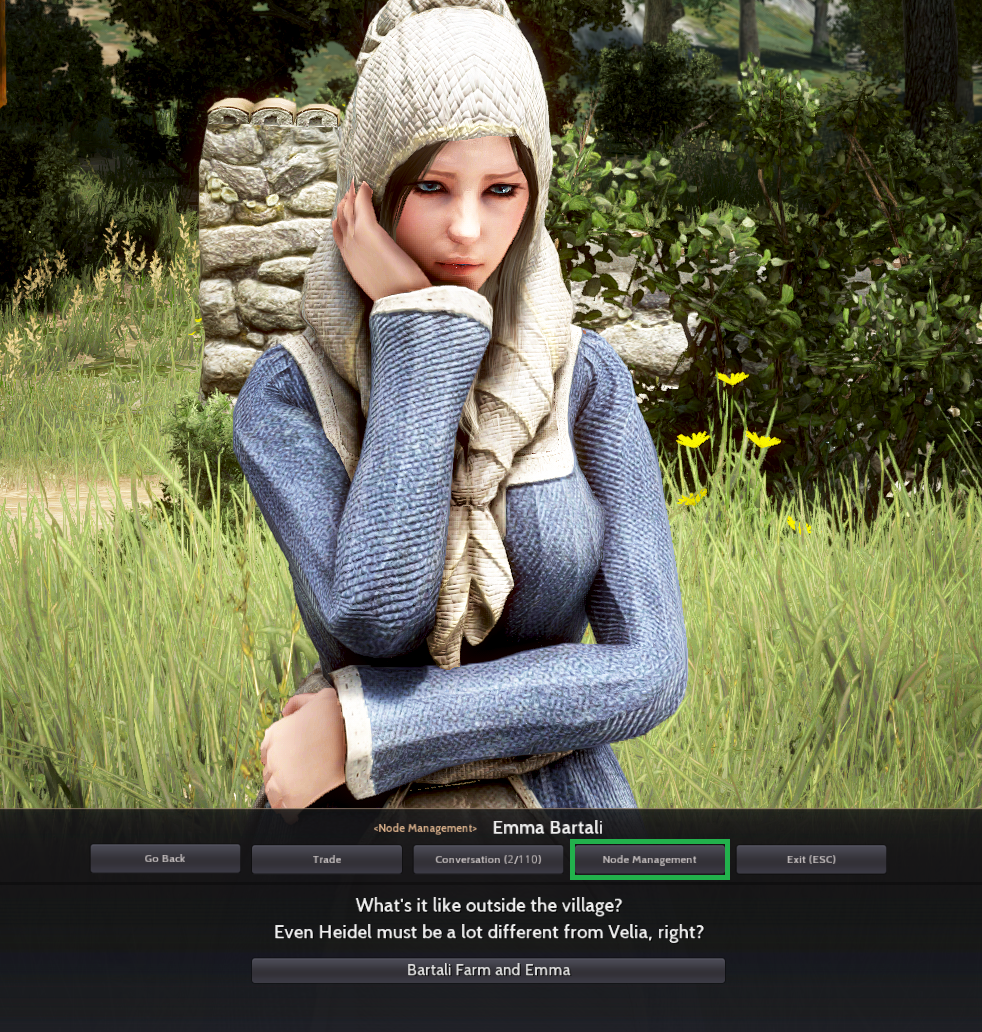 ▲ While interacting with Emma Bartali, press the 'Node Management' button. 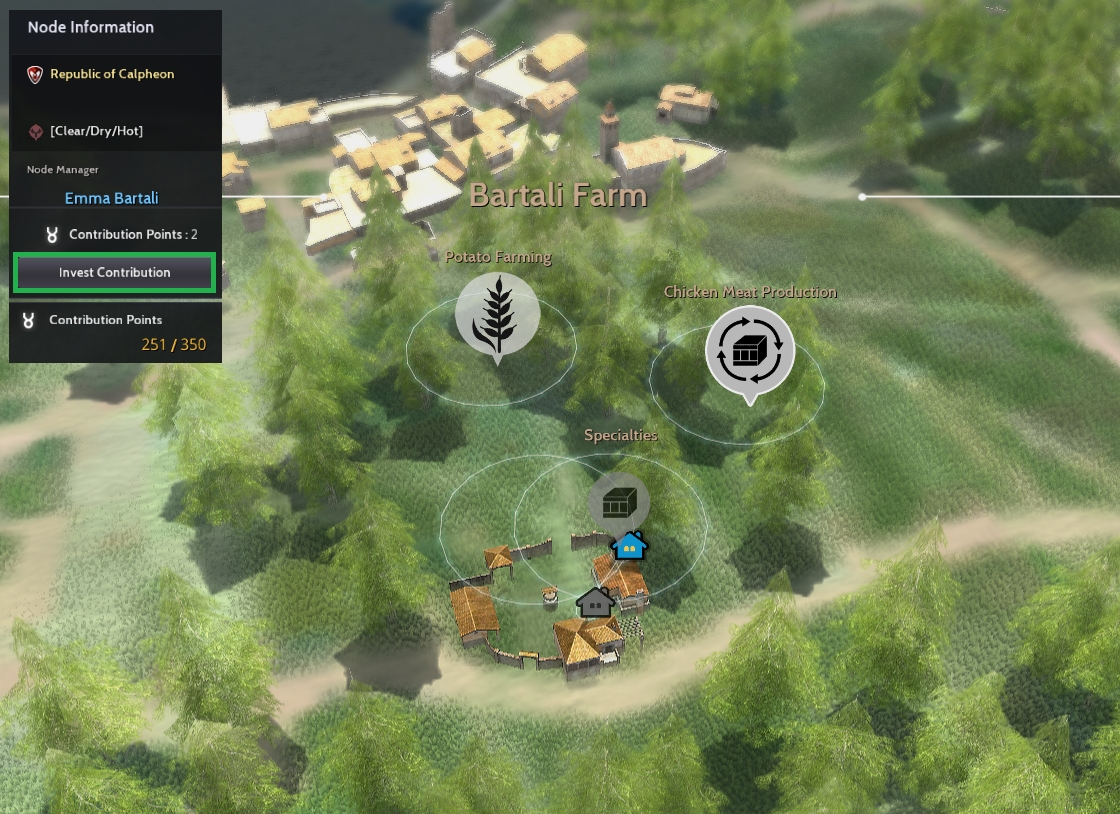 ▲ If you press the 'Invest Contribution Points' button on the screen that appears when you press the Node Management button, activation is now completed! 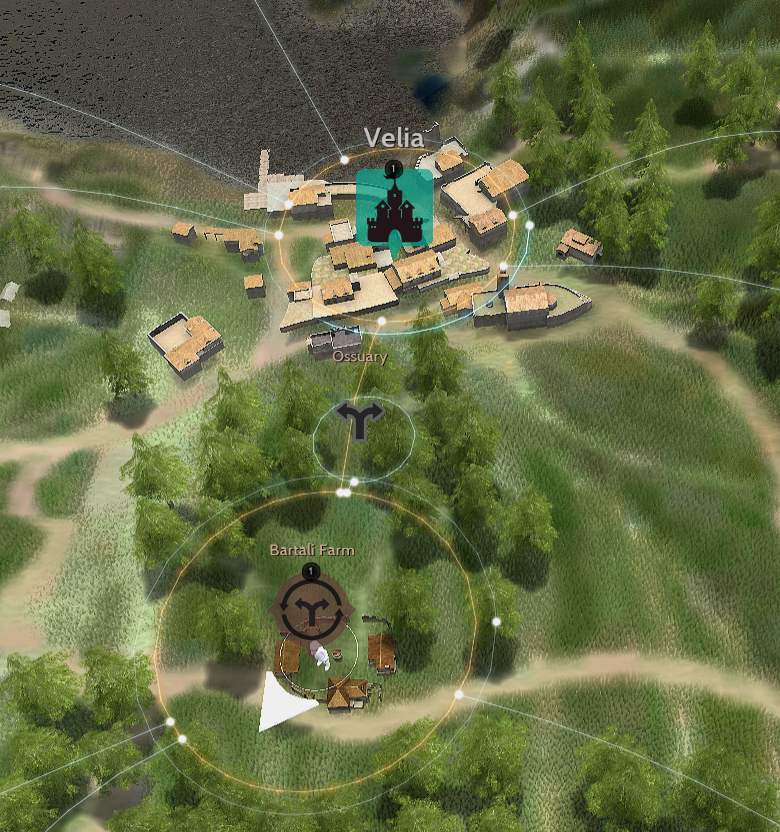 ▲ Velia and Bartali Farm are connected!

When you invested contribution points in Bartali Farm, a connection was made between Velia and Bartali Farm.

Now that Bartali Farm and Balenos Forest Node can be connected, a white line appears between two nodes. 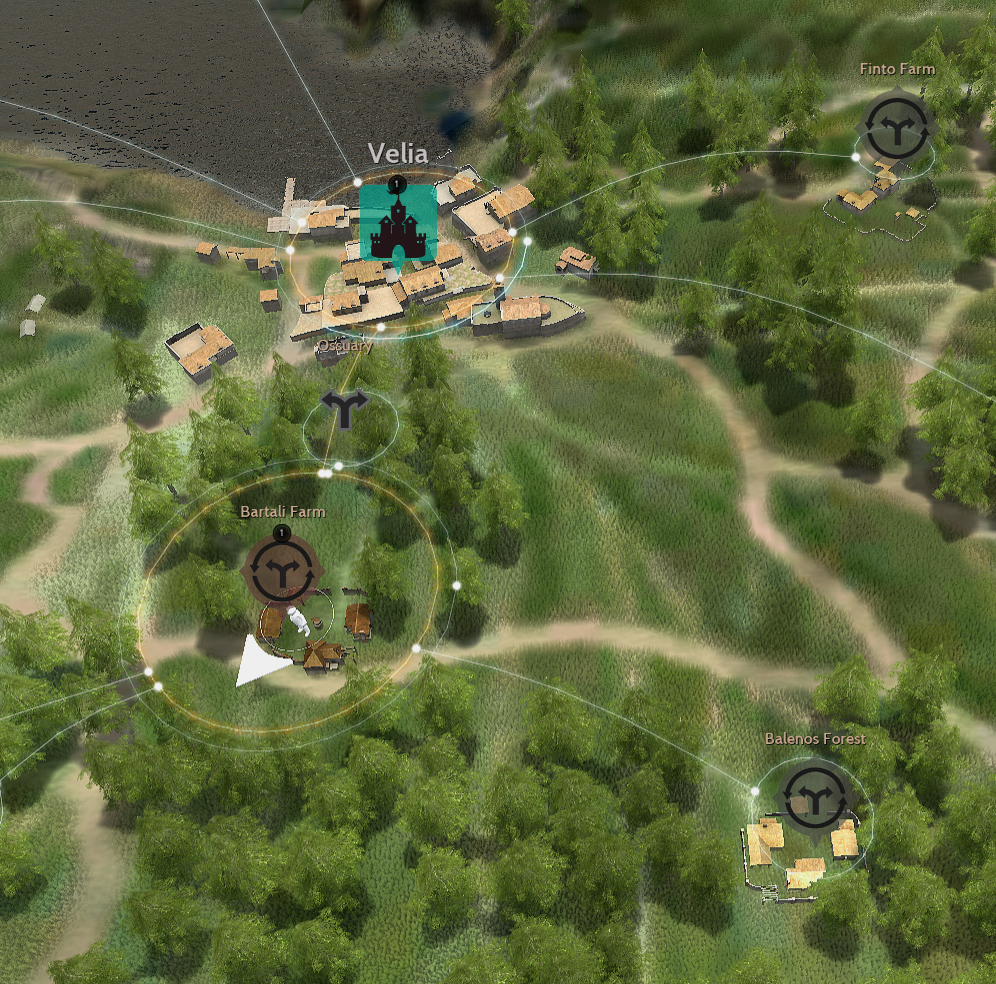 Since all local names and node names do not correspond exactly, refer to the Node information displayed on the mini map at the top right of the screen. 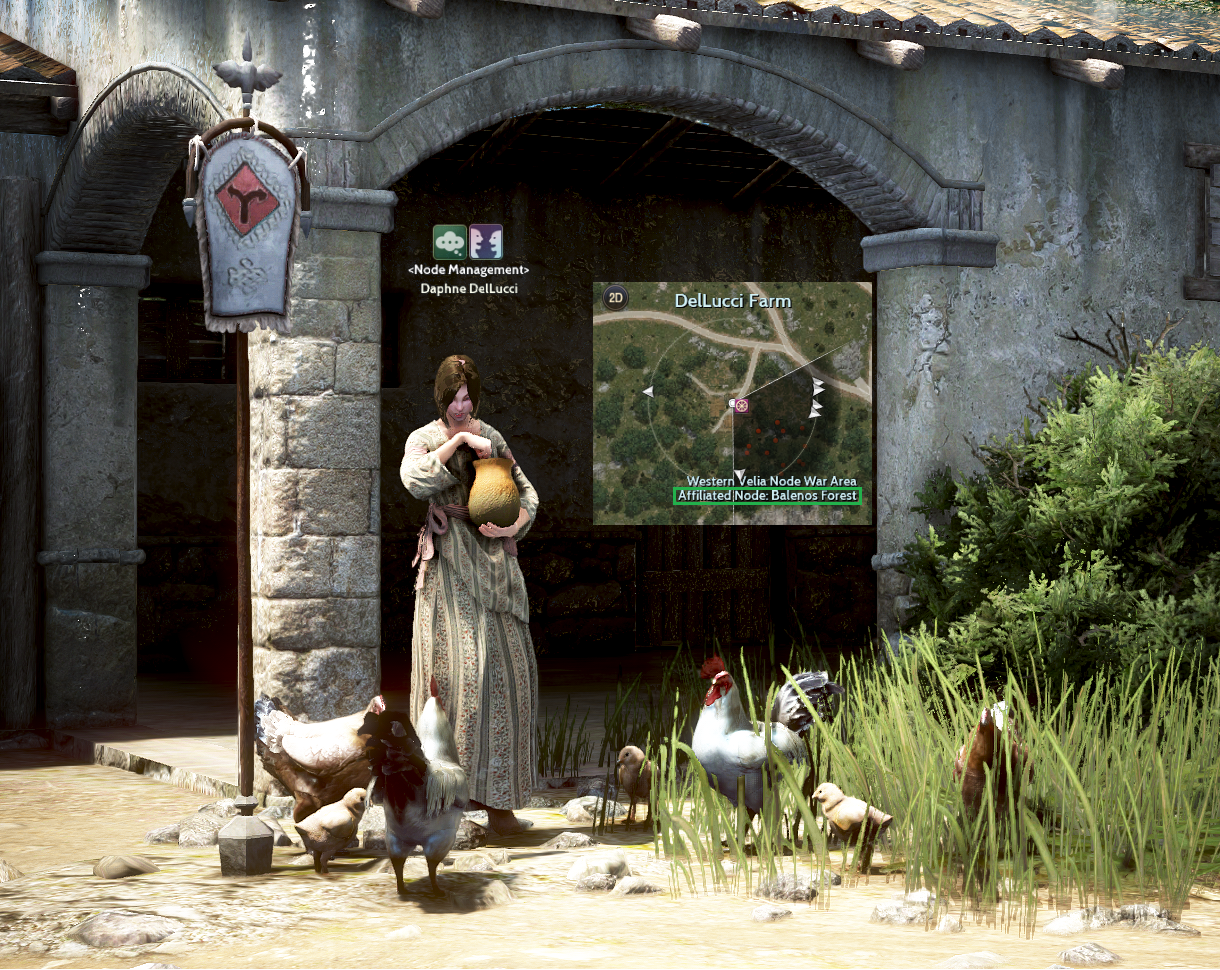 The way to activate Node is the same as the way you made Bartali Farm activated previously.

Click the Node Management button to invest contribution points, then you can see that a connection is being made among Velia - Bartali Farm - Balenos Forest. 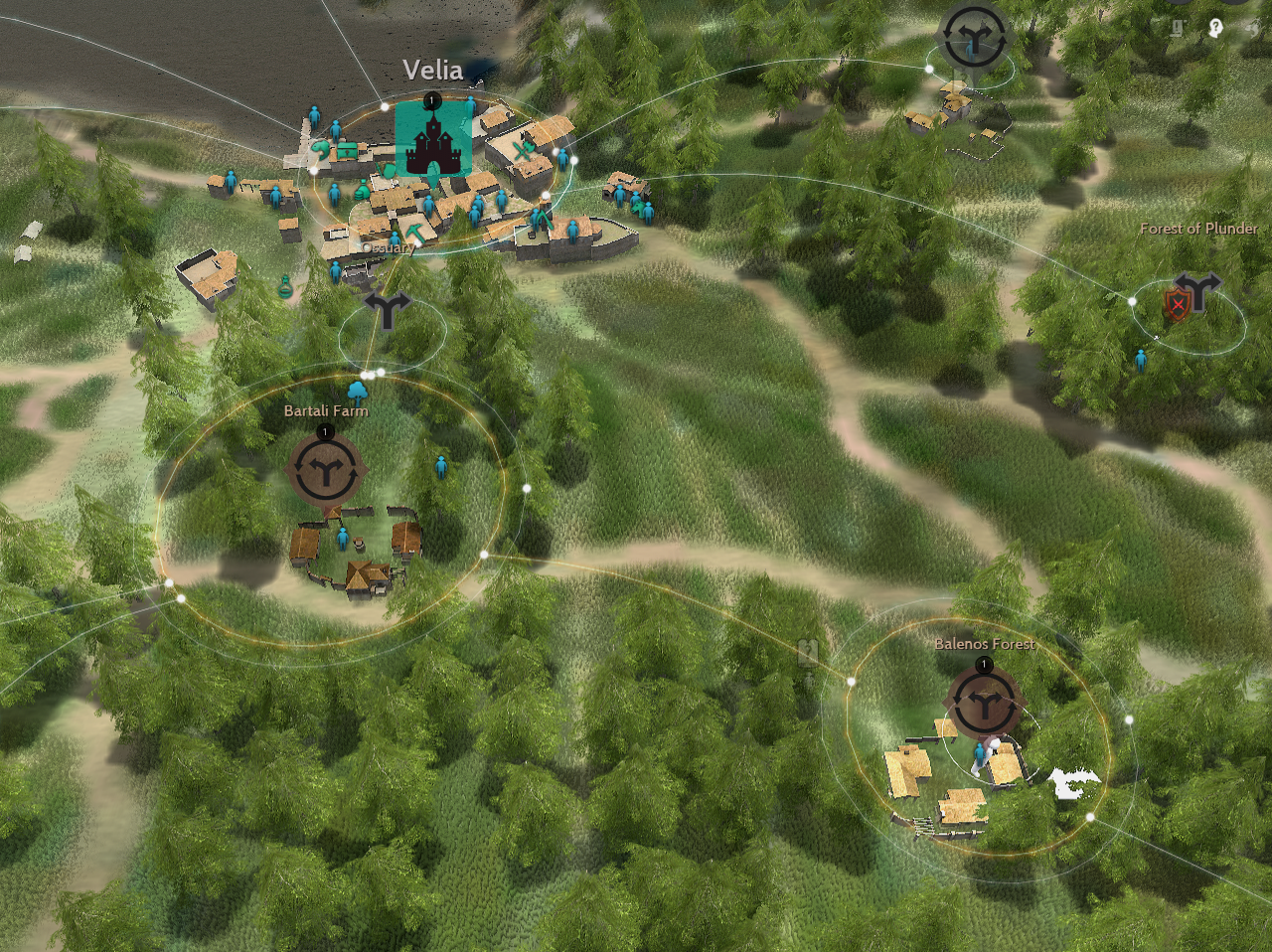 ▲ Velia - Bartali Farm - Balenos Forest, three nodes have been connected to each other.

By the way, there comes a trouble. Balenos Forest was connected, but you can’t find any new node connectable from the Balenos Forest.

In this case, you have to explore the area where the new Node is likely to be.

While walking along the road from Velia, you meet a new node manager.

Complete the investment in the Node and now you succeed to connect a Node from Balenos Forest. 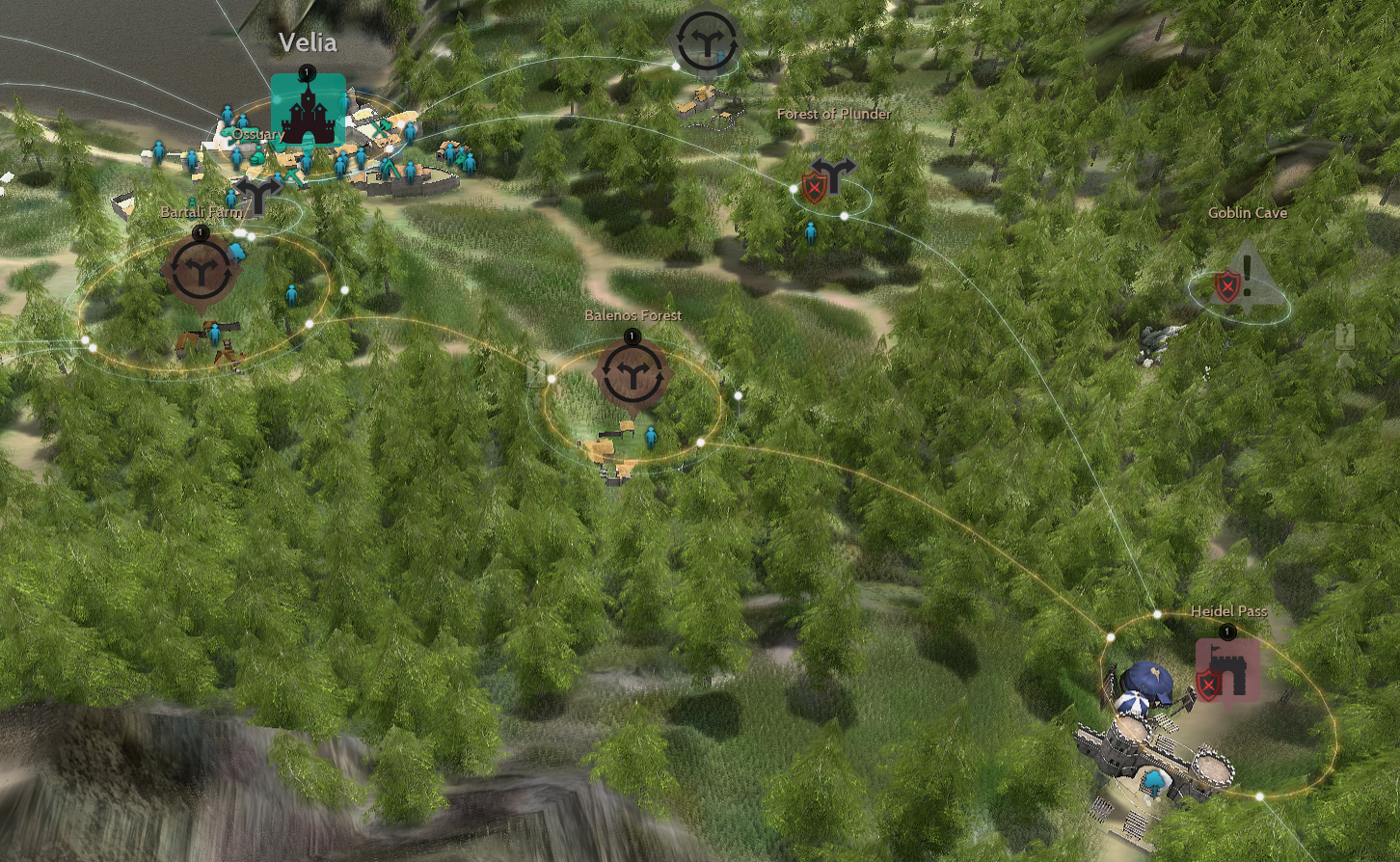 ▲ A scene of connections from Velia to Heidel Pass.

There is now only one Node with white lines in between.

It is the Northern Guard Camp located at just north of Heidel.

If you activate this node, the two towns are connected to each other as nodes.

When you connect the nodes like this, as you move between Velia and Heidel, you can buy and sell trade goods sold by the traders of each town.

It is also possible to send a worker belonging to Heidel to the Production Node at Bartali Farm, which is close to Velia town. 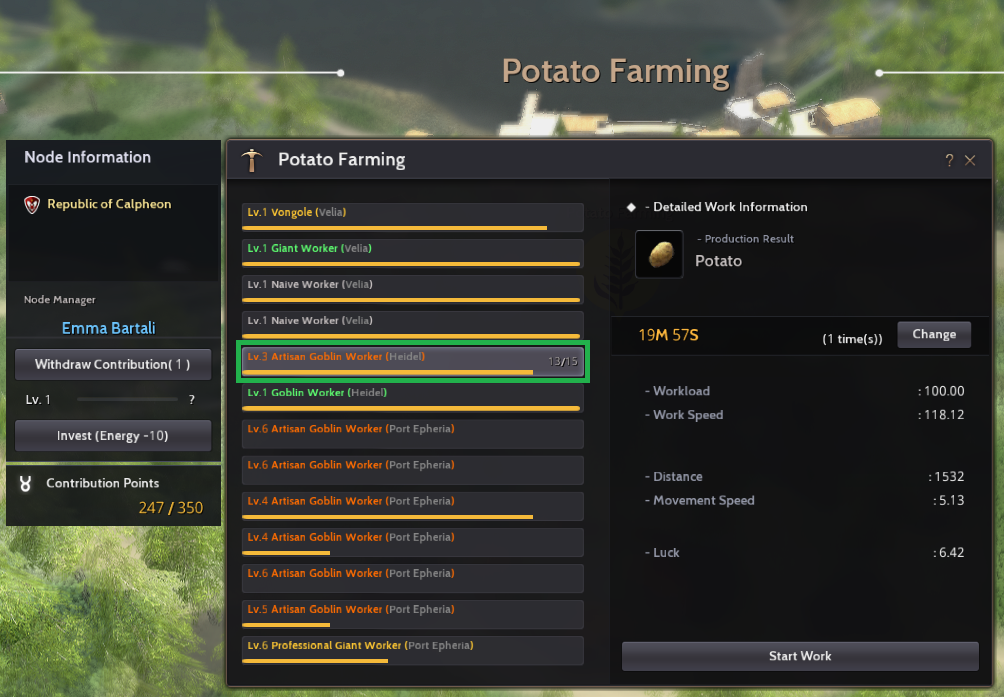 ▲ If the nodes are connected, you can send a worker from a long distance town.

When you do not know which nodes are available for connection?

If you have already acquired knowledge about a node and know the location of it in the world map, but you do not know the order of connection because the white line is not connected, select the Node and press the 'Previous Node' button.

It is helpful to find the connection order because the corresponding node and the surrounding nodes are all displayed with light pillars. 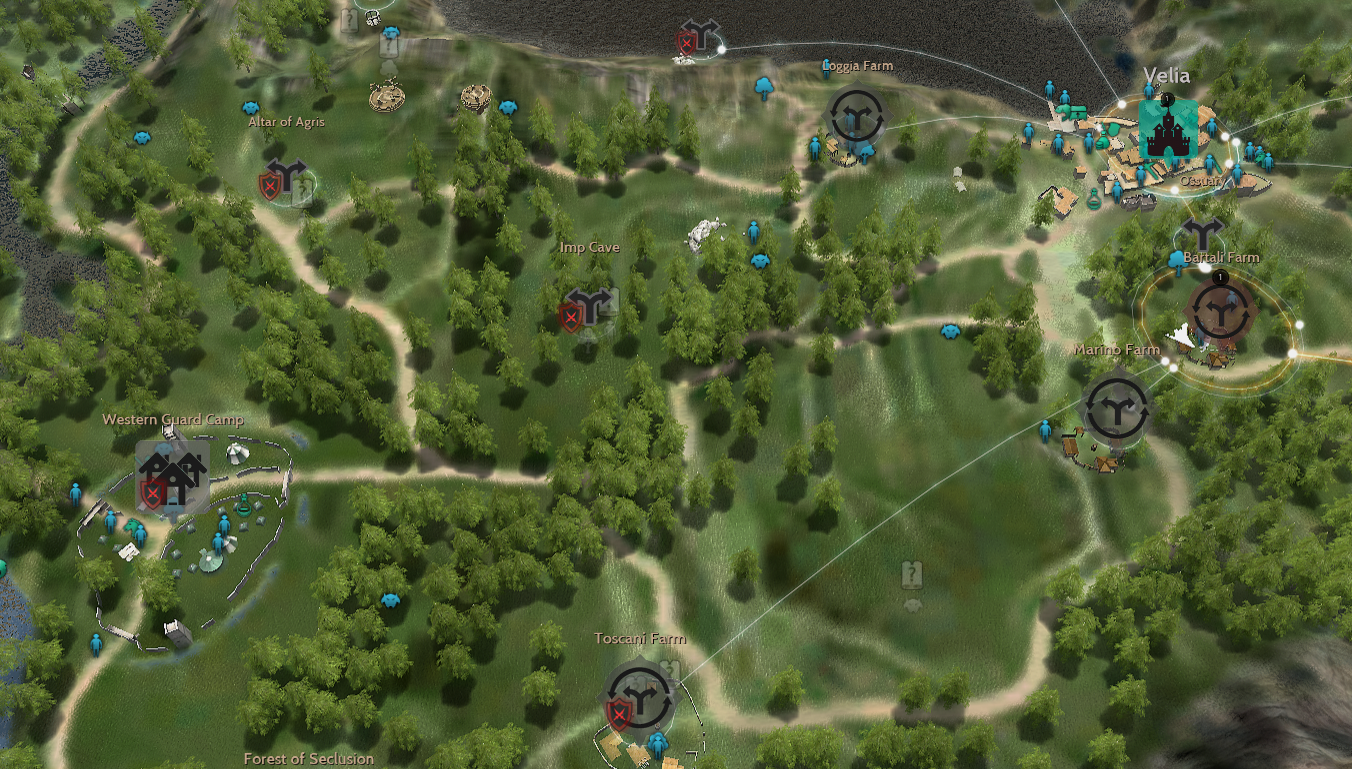 ▲ If you want to activate the Western Guard Camp, what should you do? 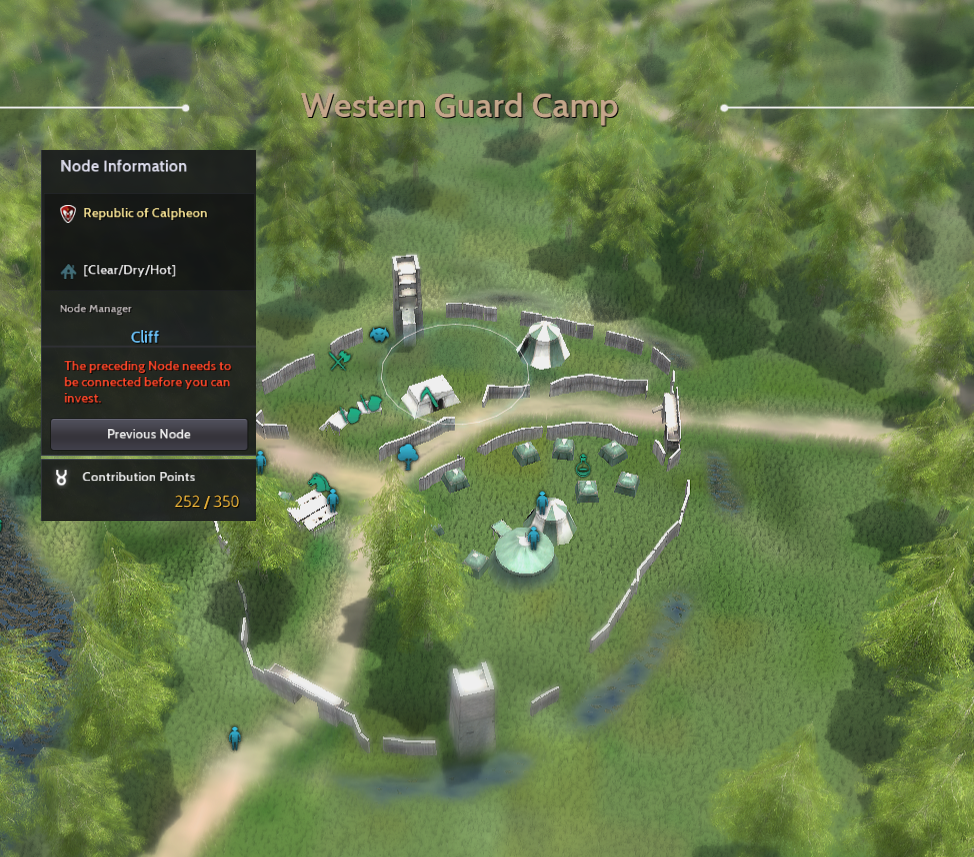 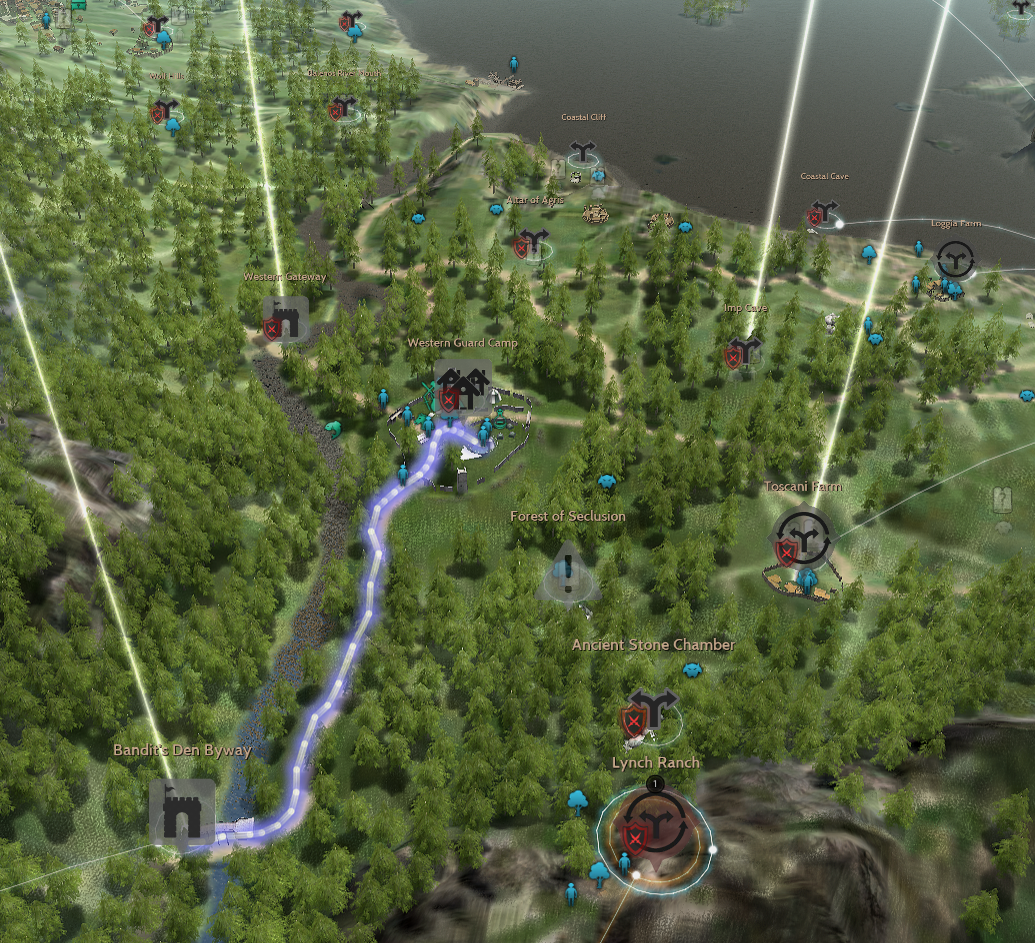 ▲ The surrounding nodes connectable to Western Guard Camp are all displayed with light pillars!

Production Node is a satellite Node that belongs to the preceding Node.

If you invest in Production Node, you can send workers to produce resources. 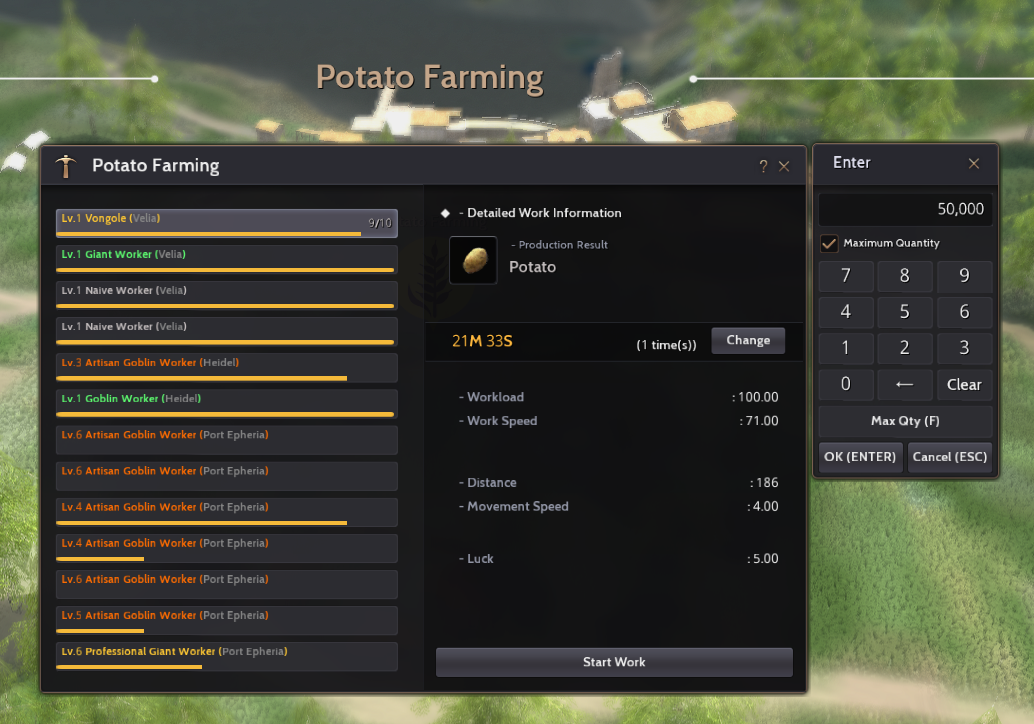 ▲ Invest contribution points to activate Production Node, then you can command the workers to make production.

But, only the workers from the area where Node is connected can be sent.

Items produced or crafted by workers are sent to the town warehouse.

If there is no room in the Warehouse, you cannot send a worker.

How to Retrieve Node Investment

You can retrieve your investment in a simple way.

Open the world map and immediately retrieve the investment from the invested node.

However, if a node is connected only to itself, it will not be possible to immediately retrieve the investment because there will be a node that is not connected to any other nodes.

You must first retrieve the investment from the Node that is connected only to itself. 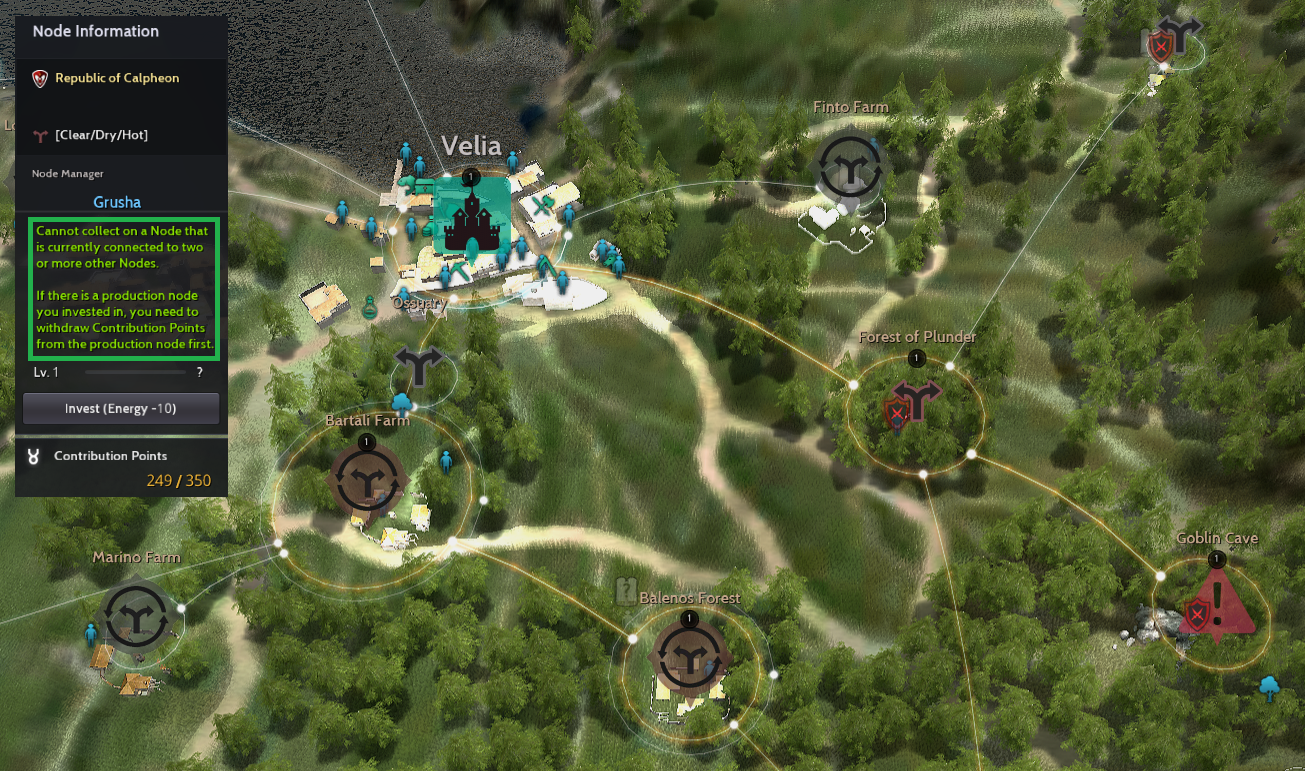