When you log into Black Desert, you’ll see the Server Selection screen.
It doesn’t matter which server you select, as barring season servers, you can freely switch between servers and access all your characters in Black Desert.

However, it is recommended for new Adventurers to use the Season-1 (Novice only) server, which provides a variety of benefits for your progression.

▲ Connect to the Season1 (Novice only) server on the very top.

After you select a server, you can create a character. Select an empty slot on the right, then press the “Create Season Character” button. 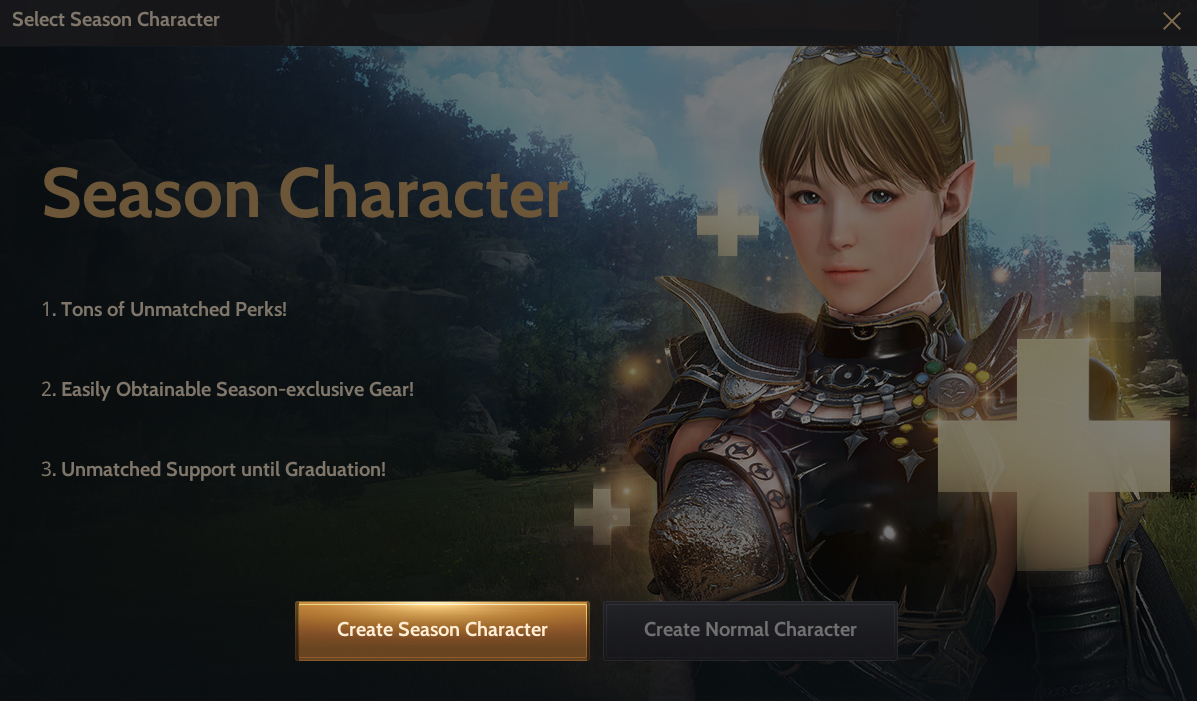 ▲ It is very important that your first character is a season character.

In the next step, you have to decide which class to begin your adventure with.
Before you select a class, refer to each of the videos for each class’ main weapon and awakening weapon from the screen.

Looking into the details on the Class Introduction page and class introductions on the Adventurer’s Guide on the official website may provide additional helpful information.

Additionally, your season character will be able to use an item called “Fughar’s Timepiece” once. This item is used to copy your current character’s level and Skill EXP over to another character.
By doing so, this function allows you to easily experience the gameplay another class offers without having to stop experiencing the seasonal content. 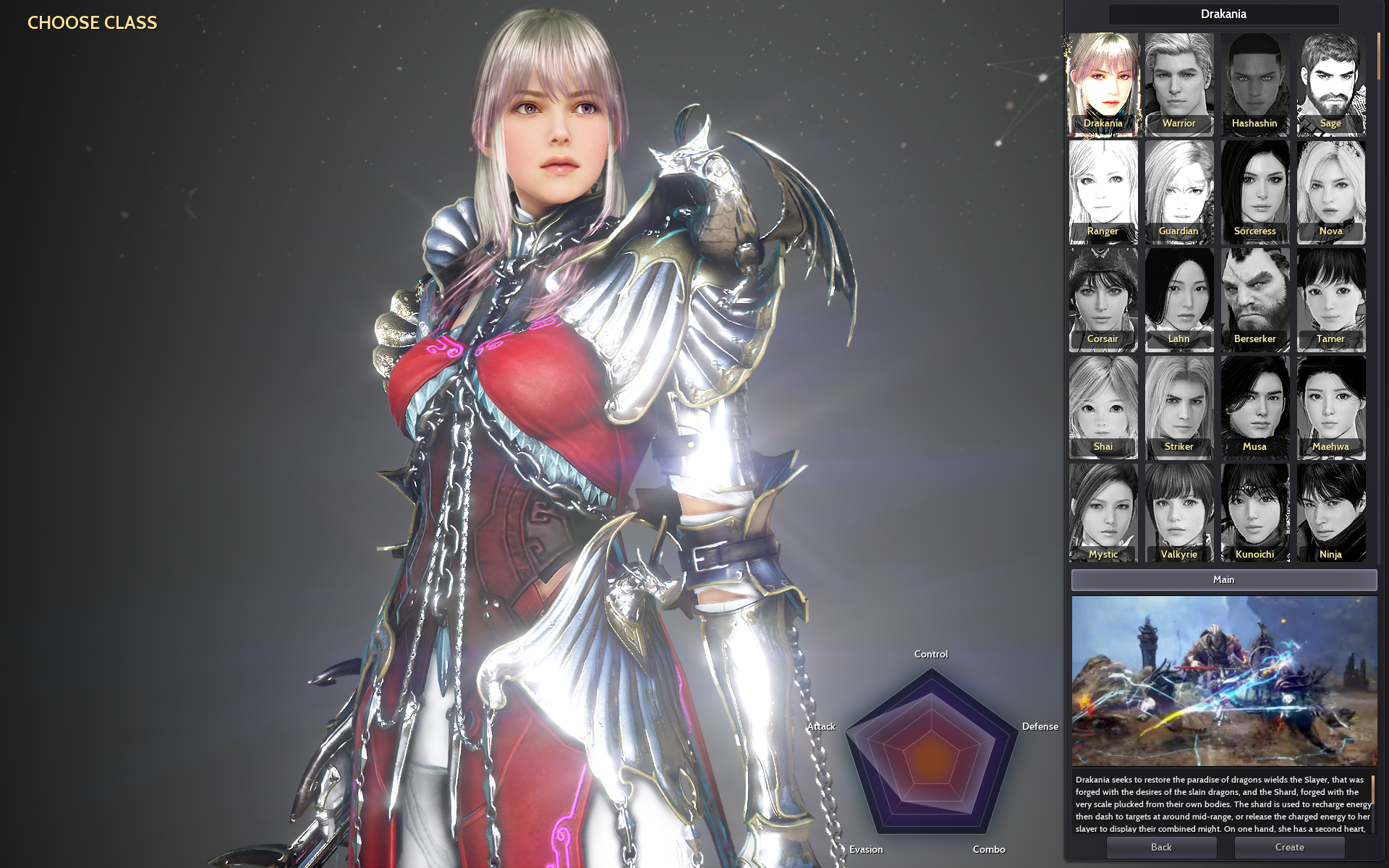 ▲ Select a class of your preference, as each class has its own unique appeal.

After selecting a class, you can start customizing the character. You can customize the details of its face type, hairstyle, body shape, and a variety of other features.

You should take the time to customize your appearance exactly to your liking, since you can only change it via Appearance Coupons and Value Packs, which are most of the time only obtainable via the Pearl Shop.
Press the Beauty Album (button shown in the picture below) on the bottom of the screen to check out the works of other Adventurers who are skilled at customizing, and apply their designs to your character right away. 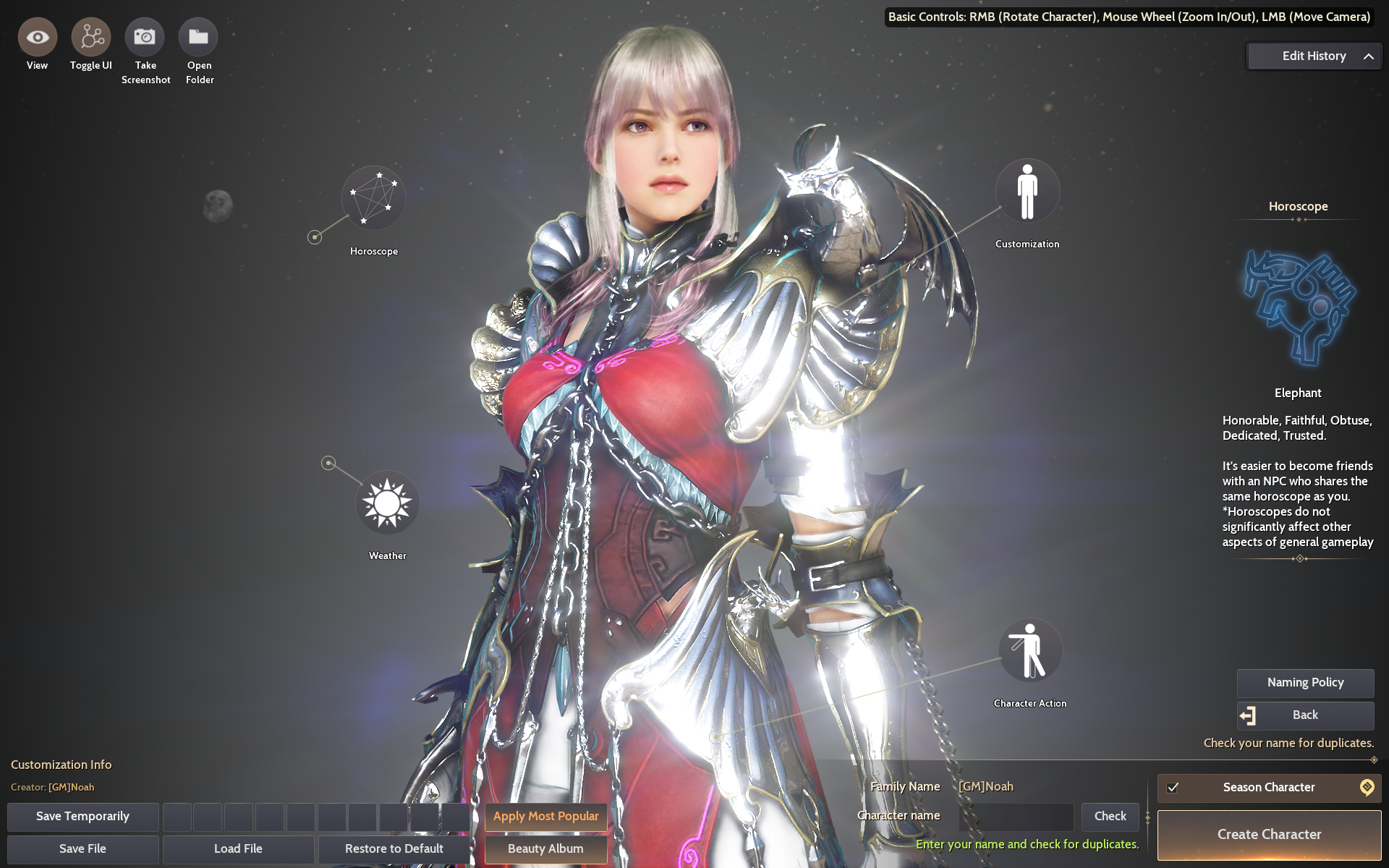 ◈ The Start of an Adventure

Once you start the game after you finish creating your character, a cutscene like the one shown below will mark the beginning of your adventure. 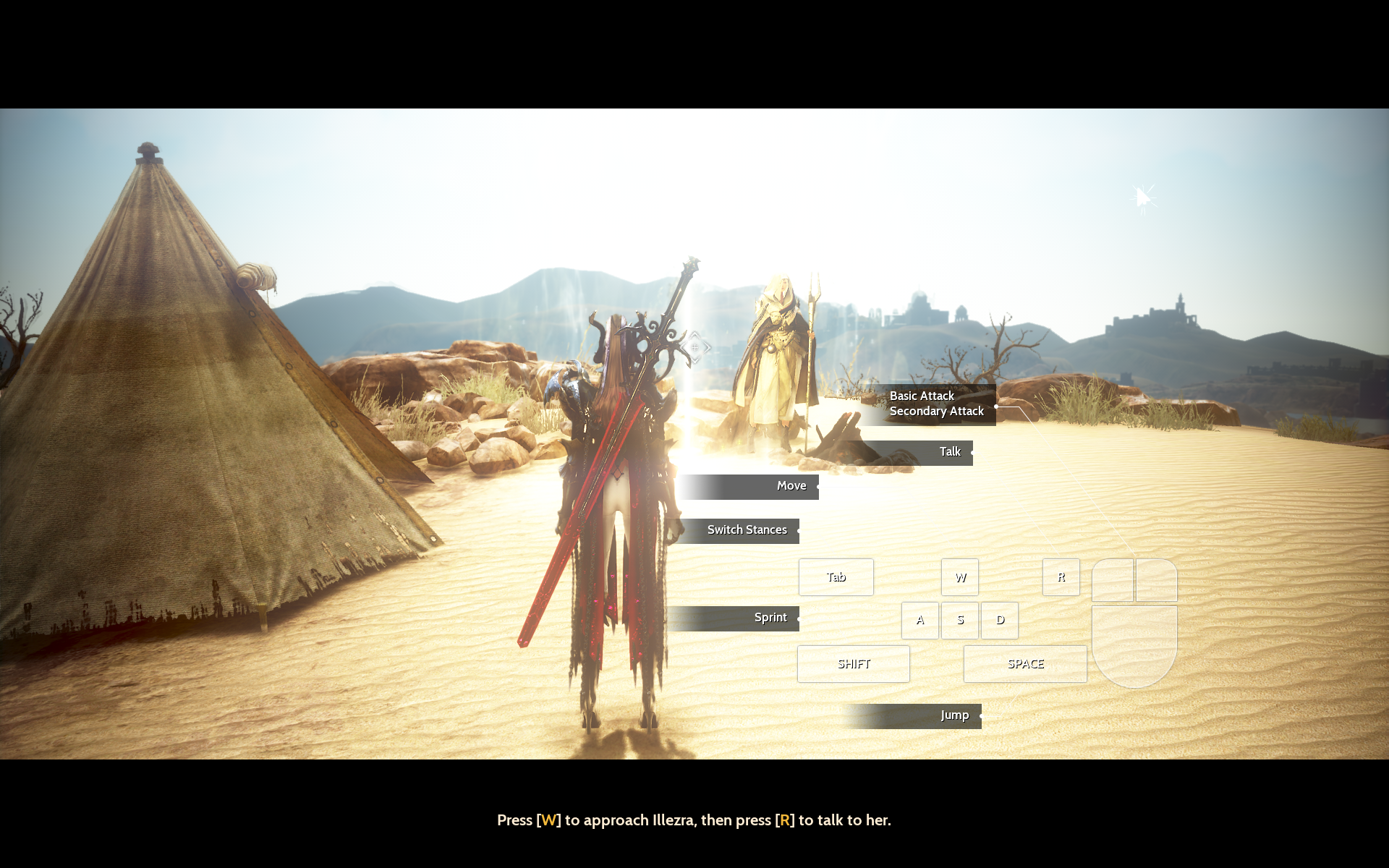 After a series of cutscenes and tutorials, the screen where you choose between one of the two main crossroads questlines, either the Ancient Stone Chamber questline or the Mountain of Eternal Winter questline, will be displayed.
If you are an Adventurer playing Black Desert for the first time, it is recommended that you start at the Ancient Stone Chamber to experience the full storyline, and for faster progression.

With another character, if you select the Mountain of Eternal Winter questline, you’ll begin your adventure in a recently added territory of Black Desert’s world and go through a more story-driven experience. 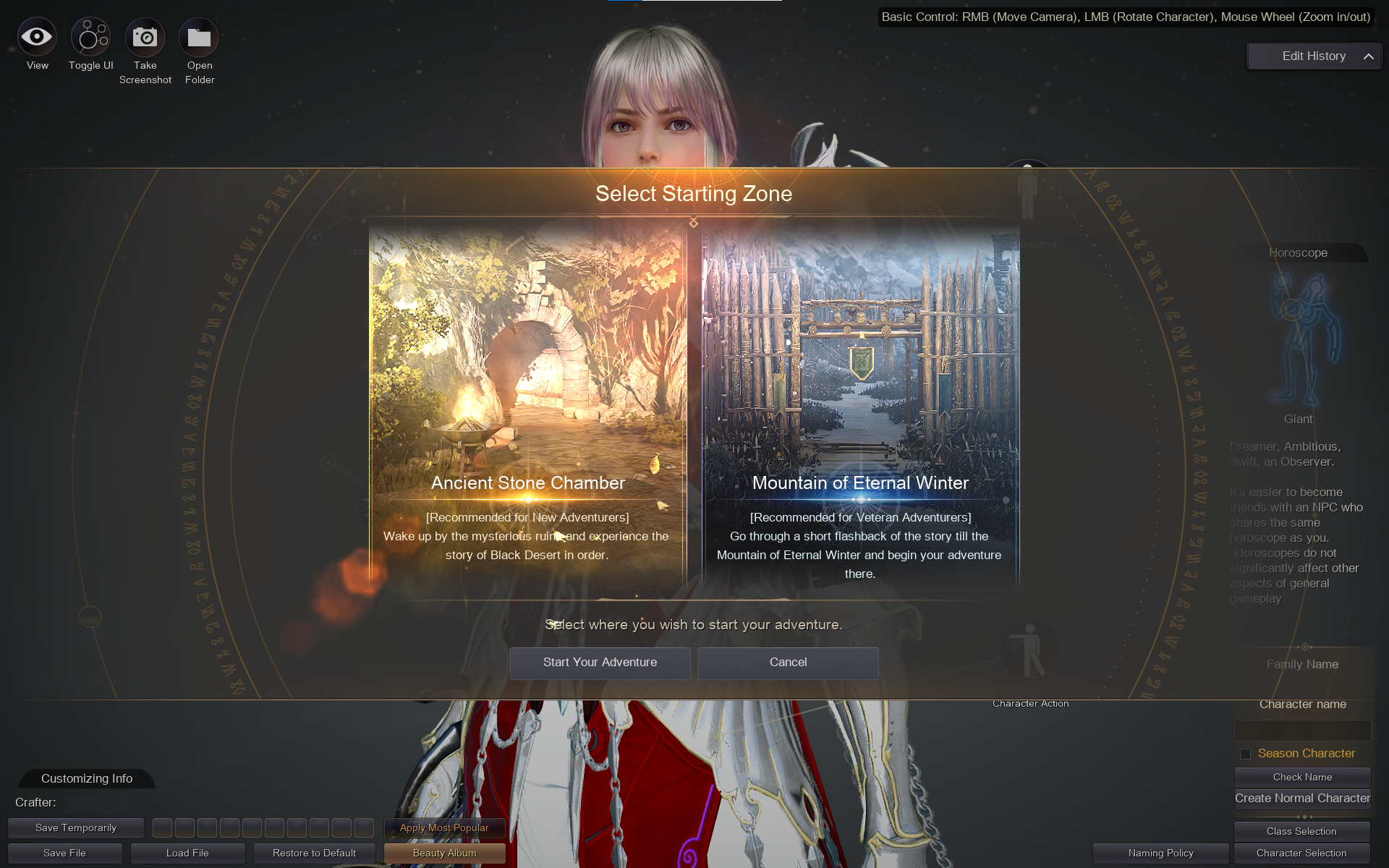 Progression as a Full-fledged Adventurer

◈ Progress via the Main Questline

The first goal to keep in mind for fast progression after stepping into the world of Black Desert with a Lv. 1 character is the completion of the Reliving the Darkness segment of the Mediah main questline, ending with the quest Apocalyptic Prophecy.

As you complete main quests, you’ll be able to obtain weapons and enhancement materials required for your character’s progression. You can also quickly reach the mid-50's in level with ease. When you are confused about which quests are the main quests, press the “O” hotkey to open up the Quests window and check the currently active quest on the “Main” tab. 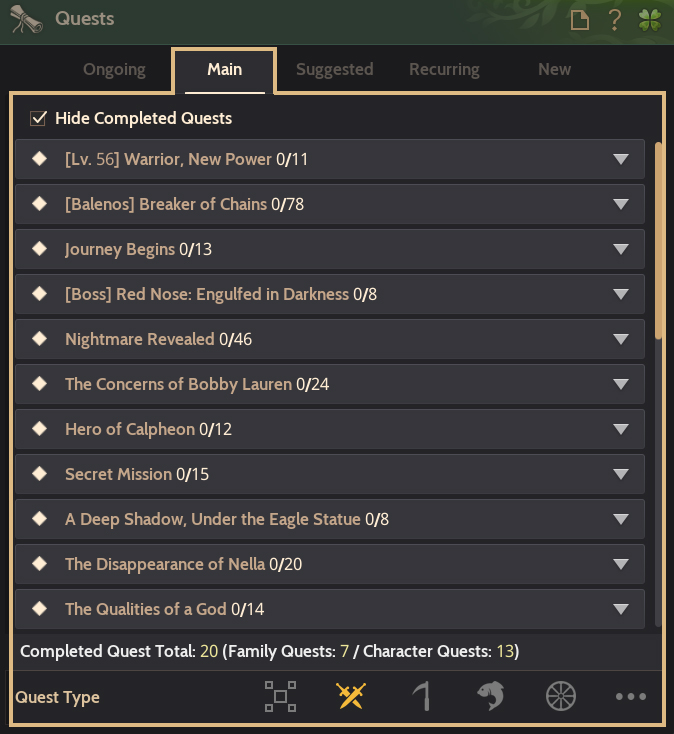 ▲ Check out the Main tab and continue your adventure in order.
(You can change the Quest Type at the bottom of the screen once you reach Lv. 20.)

You must focus on enhancing your gear (equipment) to defeat enemies that grow increasingly stronger as you progress. A good initial goal would be to enhance the Naru gear you obtain from the main questline step-by-step and up to its final enhancement level, PEN (V). For more details, refer to the gear guides.

Tip: During your adventure, if you have a lot of items piled up in your inventory, use an NPC vendor’s “Sell All Junk Items” function. It is recommended to use the storage in each town if you aren’t sure of what to do with the remaining items in your inventory. 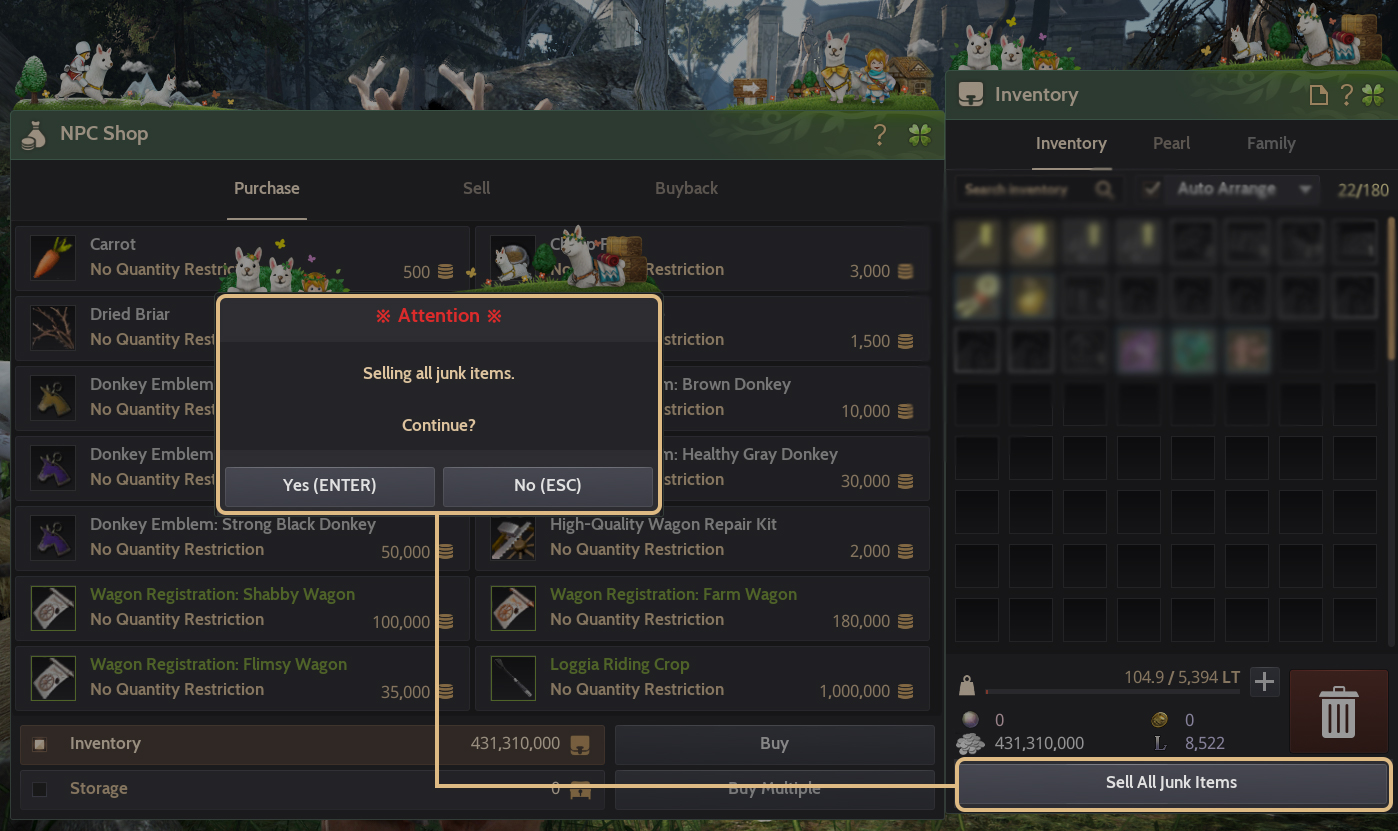 Once you complete the Apocalyptic Prophecy quest, your level will likely be in the early to mid-50s.
Once this is done, you should then aim for reaching Lv. 56, at which time you can proceed with the Succession and Awakening quests for your character.

Open the World Map (hotkey: M) screen or check the Monster Zone Info window from the game’s main menu (hotkey: ESC) to view other monster zones with recommended AP ranges that are either similar to or slightly lower than your current AP. It is recommended for you to have DP stats that equal around 1.2 to 1.4 times the zone’s recommended AP.

For example, the currently recommended AP for Polly’s Forest is 160+, while the recommended DP is 250+.

For most classes in Black Desert, you can select the combat type through Awakening and Succession.

Upon selecting Awakening, your character will use its awakening weapon and learn unique skills that are new and more powerful for a different type of combat.

On the other hand, if you select Succession, the current combat type and skill type will be maintained. However, you can learn higher level skills versions of skills and become more powerful just like as in Awakening.

Once you’ve completed Succession and Awakening, set your final season goal to be reaching Lv. 61.
There is no max level limit in Black Desert, but your combat strength depends more heavily upon your gear than your level, which is why it is recommended that you defeat monsters in monster zones appropriate for your current gear or enjoy a variety of other content once you reach Lv. 61.

There are three major ways to reach Lv. 61.

The first is leveling by defeating monsters, which is the most basic way. Level up quickly after checking out the various buffs that boost your combat strength and EXPs from the section on defeating monsters in the guide mentioned in the "Progress via the Main Questline” section of this guide.

The second way is known as the “Chenga Run.” The Chenga Run refers to leveling up quickly with the EXP you obtain from completing the quests of a certain territory from Lv. 59 to Lv. 61. You can normally reach Lv. 61 more quickly this way than from defeating monsters. Please refer to the guides posted by our Adventurers for more details on the Chenga Run. (Prior preparations ㅣKamasylvia region ㅣDrieghan region ㅣ Northwestern Calpheon region)

The third way is leveling up via the main questlines. Black Desert’s main questlines continue on to the Valencia, Kamasylvia, Drieghan, O'dyllita, and Mountain of Eternal Winter territories after you complete Mediah’s quests. Although this may be the best way to experience interesting storylines within the world, it can be a longer and tougher process in comparison to the prior two methods in regards to the rate at which you level up and level of difficulty.

Into a Wider, Freer World!

You should complete the challenges on the Season Pass and enhance your Tuvala gear up to PEN (V) with your season character.

If any classes other than your current class catch your eye, try using Fughar’s Timepiece. You can copy over your current character’s Combat and Skill EXPs to another character, and as a result, you'll have two Lv. 61 characters.

Please refer to the guides on enhancing your gear for more details on how to improve your gear beyond PEN (V) Tuvala. At this point, we would also like to recommend checking out another appealing aspect of Black Desert: Life Skills.