There are various life contents in Black Desert.

Workers can be a great help when you want to enjoy these life contents.

Their most important role is to gather ingredients from Production Nodes or to craft items in the Workshop.

Workers are NPCs that does certain types of work for your character.

In order to hire a Worker, you need to buy a Worker Contract from the Administrator.

You will spend 5 energy when you click ‘Worker Contract’, and one Worker will randomly show up. You can hire this Worker by clicking the ‘Hire Worker’ button, or you can spend additional 5 Energy to choose another worker.

When you’re hiring a Worker, you need to have certain amount of money in the storage of that town. You can’t hire a Worker if you don’t have enough money.

On top of that, you’ll have to click ‘Worker Contract’ and spend energy until a Worker your preference shows up. 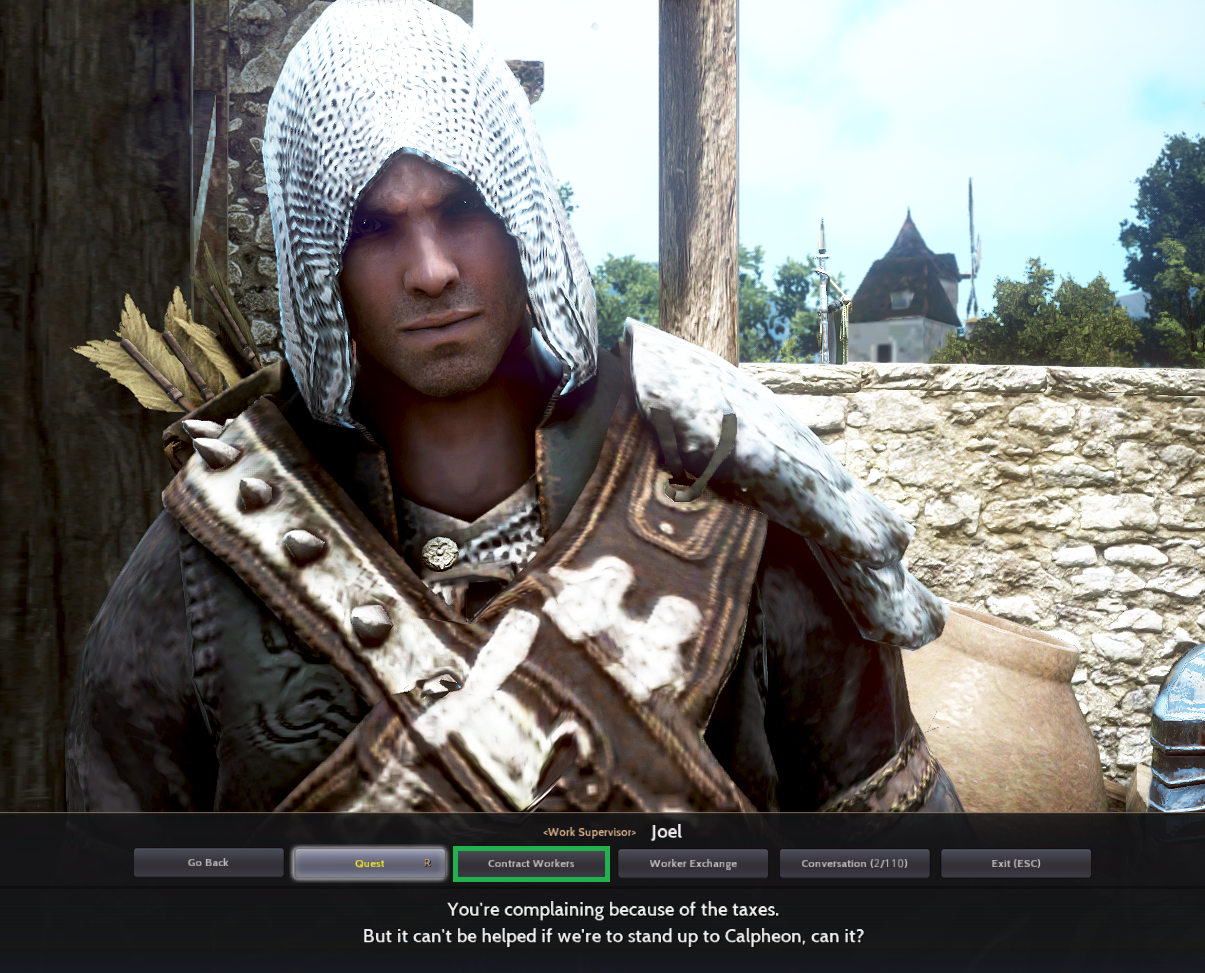 ▲ Hire Workers from the Administrator or Worker Manager

There are NCPs who sell yellow grade Worker Contracts near the production sites such as farms.

The Workers you can hire from the Amity Shop are limited to yellow grade, and the species, stats and talents are fixed.

You can fire a Worker by opening the World Map [M] and selecting the town the Worker is working at, or through the Worker managing window.

If you want to fire a Worker through the World Map, click [Fire Selected Worker] button from the [Manage Workers] list.

There are three types of Workers: Goblin, Human, and Giant Workers.

Goblin Workers have the fastest working speed and movement speed, so they get the job done quickly compared to other workers.

But they can’t repeat the work several times because their Stamina is quite low.

Giant Workers have high Stamina so they can repeat the work many times, but they are slow. Human Workers has balanced stats between Giant and Goblin Workers.

They work and move at a moderate speed, and their Stamina is higher than Goblins Workers but lower than the Giants Workers.

These three types of Workers are categorized into five different levels depending on their stats.

The ‘Naive’ Workers white grade, and they have the lowest stats. The title ‘Naive’ is only applied to Giant Workers.

Goblin and Giant Workers without any titles are green grade, and their stats are a little bit better than the white grade workers.

The Workers with ‘Professional’ title are yellow grade, and their stats are quite high.

The workers with ‘Artisan’ title are orange grade and they have the highest stats of all. 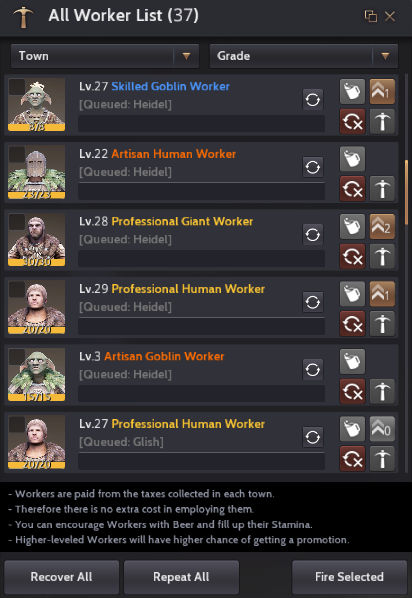 ▲ Workers have different stats depending on their grade.

You can hire some of the NPCs near a farm if you increase the Amity.

These Workers are set as ‘Professional’ Workers (yellow grade). When you hire them, you will get to keep the species, stats and talents.

The advantage of hiring these Workers is that you’ll get Profession Workers just by increasing the Amity. But keep in mind that they can’t be promoted to Artisan grade since they can’t take the promotion test. 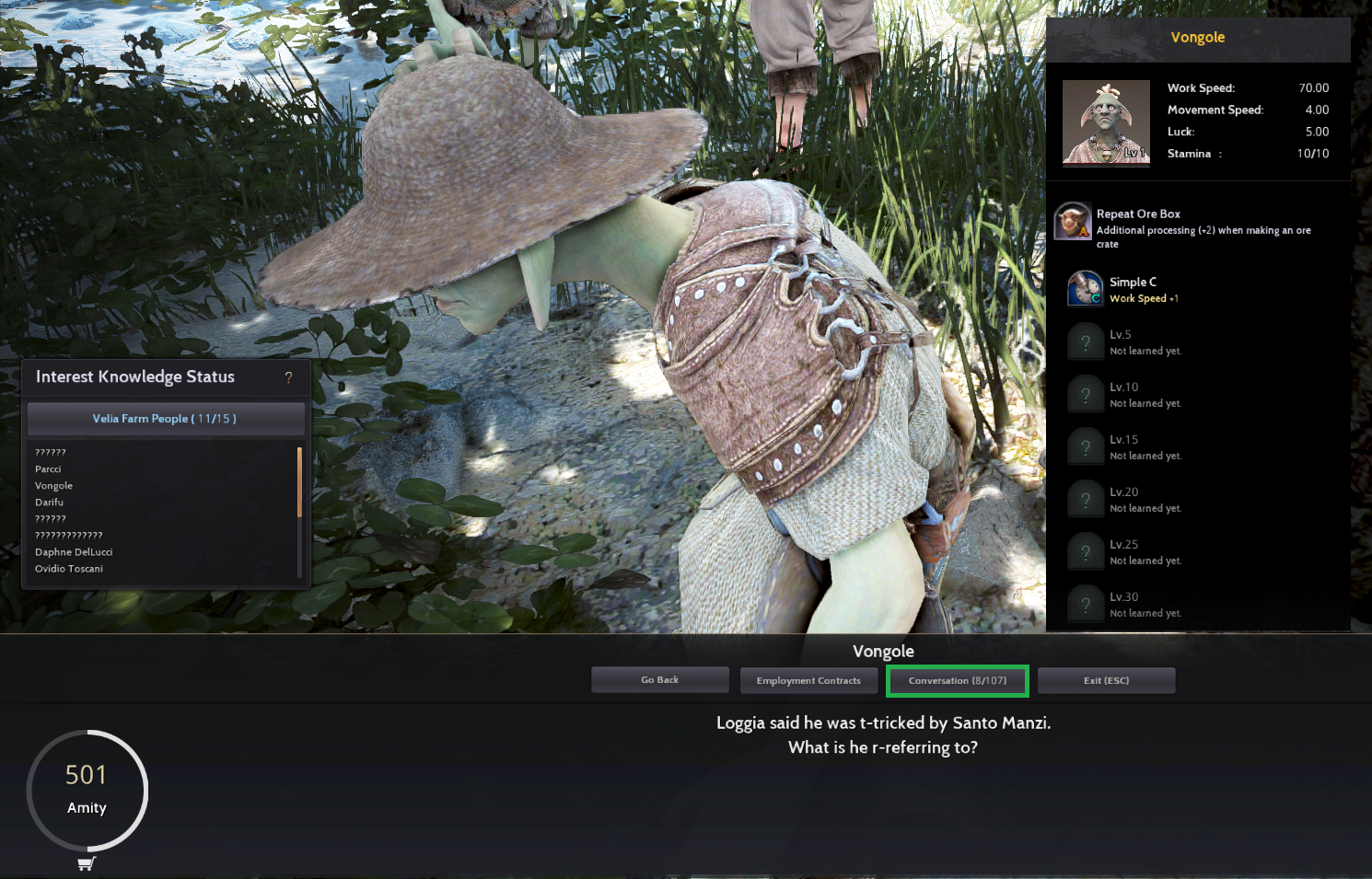 ▲ You can always hire some workers with high Amity.

There are five ways to assign tasks to Workers.

First, send the Workers to Production Node and let them collect the resources.

If you send the Worker to a Node that has been activated with Contribution Points, your Worker will repeatedly collect resources from that area.

You can repeat the work 50,000 times, but the Workers have a limited amount of Stamina. You’ll have to restore their Stamina from time to time. 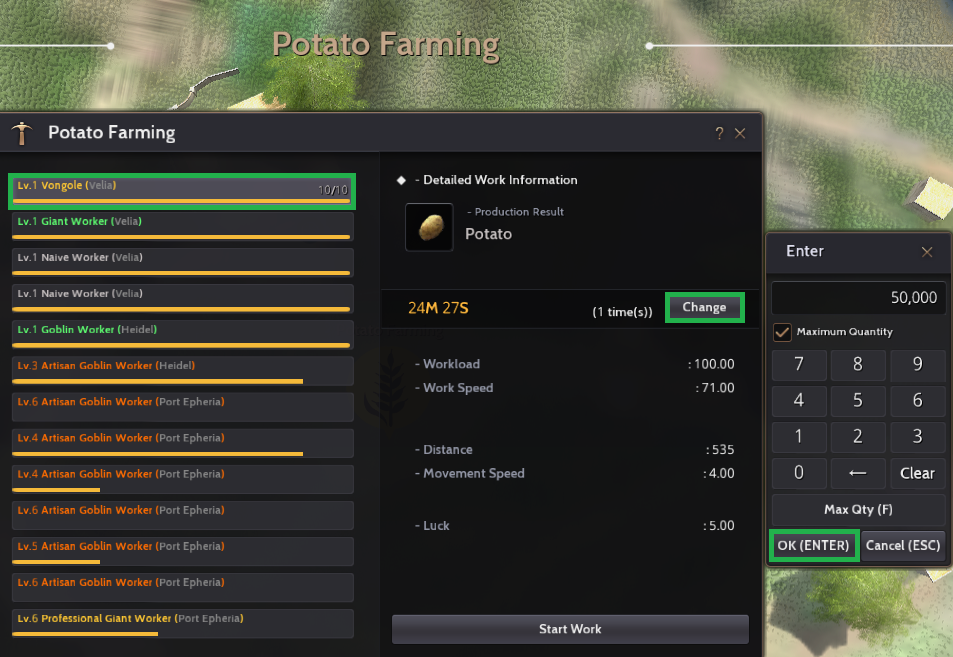 ▲ Activate a Node, select a Worker, set number of repeats and start working!

Second, you can make the Workers to craft at the house.

In order to send Workers to the Production Node, you need to invest in it.

On the other hand, in order to send the Workers to start crafting in your house, the house must be set as a Workshop.

In order to craft, the materials need to be in the town where the Worker is at rather than when the Workshop is located. 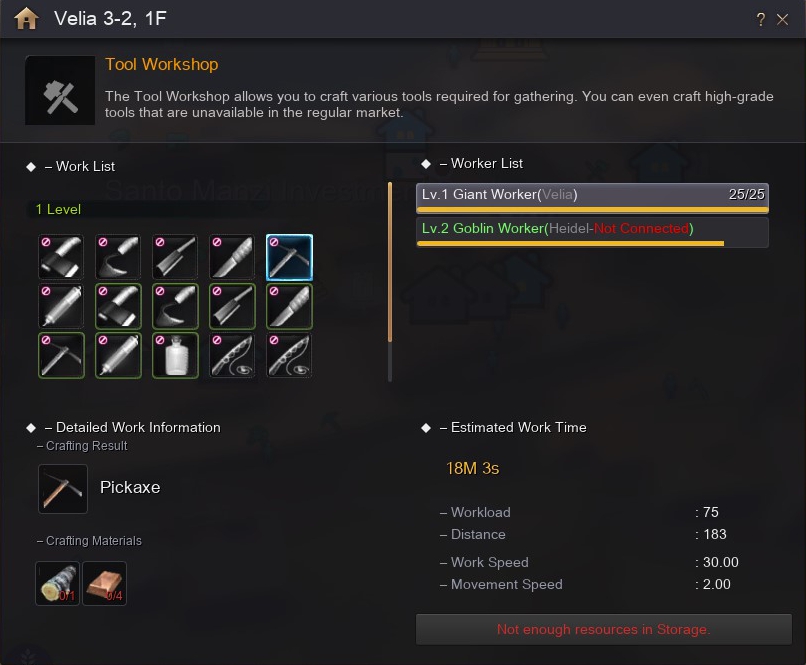 ▲ You need to have enough materials in the storage of the town where the Worker is included in.

Third, you can earn money by sending Workers to the Investment Bank located at the major cities.

You don’t need to make an investment since the bank belongs to the city, but you’ll need Gold Ingots in order to send Workers there.

You can buy the Gold Ingots from the Currency Exchange. Unlike other items, you will retain almost the full price of the original item except a small amount of tax.

Fourth, you can send the Workers to the garden to take care of the crops.

When crops grow, they get tangled with each other or insects grow by a certain probability. This will slow down the growth rate of your crops.

If you send Workers to the garden, they will prune the branches and catch the insects. This way, you’ll grow healthy crops.

▲Send Workers to the garden let them take care of the crops.

Fifth, you can make the Workers to build a Command Post or a Fort for the Conquest War or Node War.

You can join the Conquest War or Node war only when you finish building the Command Post or the Fort within a given time. So the guild members might send a handful of their Workers.

When you assign work to your Worker, Stamina will get spent. You can’t order them work when their Stamina hits 0.

In this case, you need to press the ‘Recover’ in the Manage Workers menu or fire the Worker and get a new one.

You need certain type of food items such as Beer or Cheese Pie in order to restore their Stamina.

▲You can restore the Worker’s Stamina with foods such as Beer or Cheese Pie.

You can check the list of your workers at the bottom right corner of the World Map or from the Worker List of ESC menu.

You can make the Workers to stop or repeat their work. You can also look at types of work they are doing at the moment, the remaining time, and how many times they are going to repeat the work.

If you have a Worker with level 30 or above, and their EXP is more than 50%, you can consume 50% of the EXP to change one of its skill to another random skill. 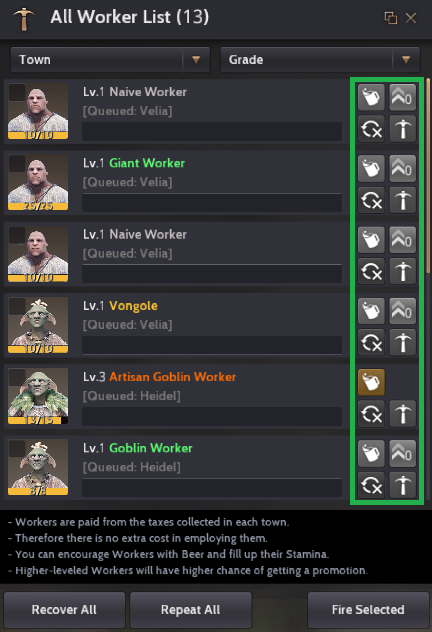 ▲you can control various function through the Worker List pop-up.

They will level up by repeating their work, and each time they increase 5 levels they will learn skills.

When they reach Level 30, they will have a total of 7 skills. The Workers learn skills at random, so it is difficult to obtain Workers with the skills you want.

The workers who gather materials from the Production Node will be more efficient when they learn skills related to work speed or moving speed.

On the other hand, if you care about work efficiency in comparison to Stamina, additional Stamina recovery skill as ‘Innate Stamina’ can be useful.

Packaging skills allow you to produce trade items quickly with additional processing. You can package items such as herb, ore, mushroom, fish and much more. This is a skill that everyone wishes to learn since it has great efficiency. 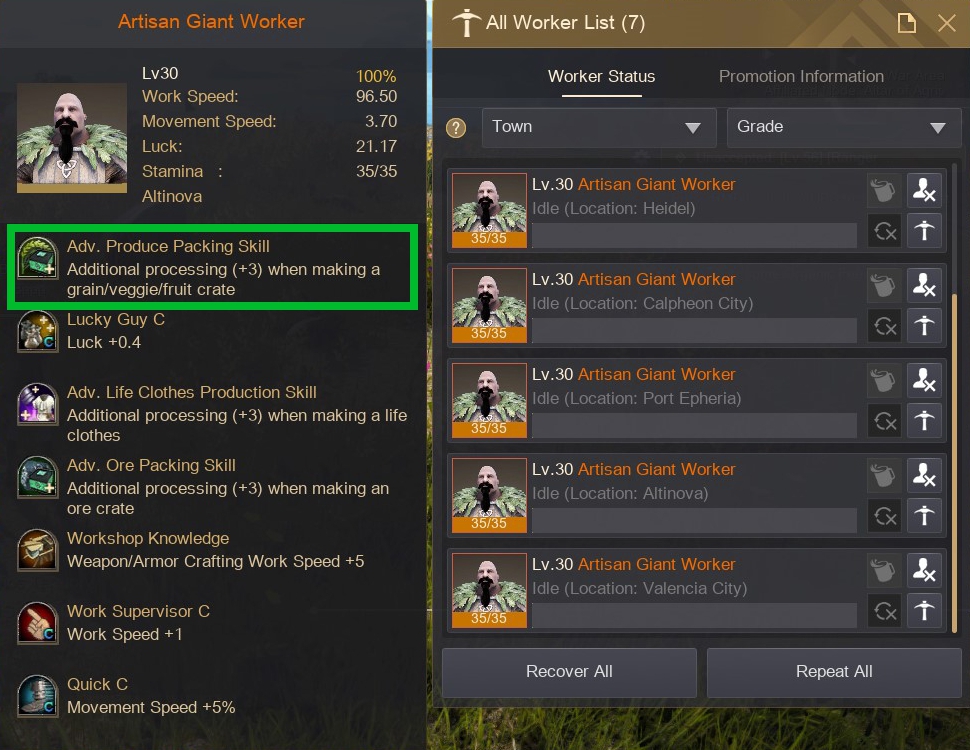 ▲ It’s difficult to make your Worker learn a particular skill.

If a worker passes the Promotion Test and becomes a higher grade Worker, it will go back to Level1. So they will know only 1skill at this point, and they will learn new skills when they level up.

The talents of the yellow grade Workers that you hire from the Amity Shop are already set, so you should check which worker has the skills you need. 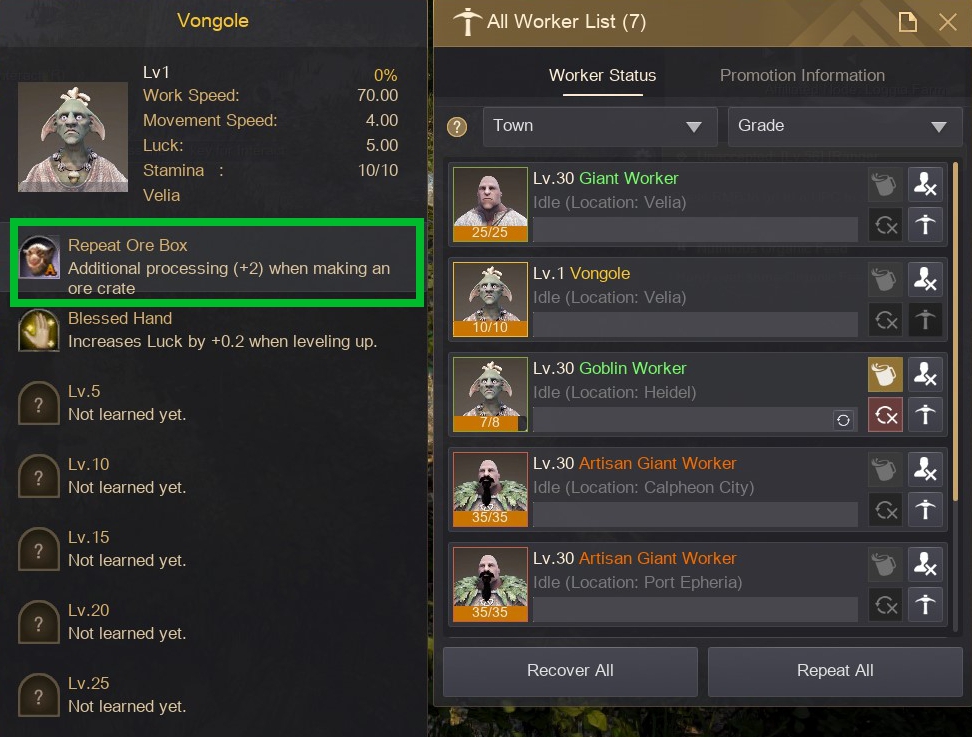 ▲ The Workers you hired from ‘Vongole’ near the Loggia Farm will have ‘Repeat Ore Box’ skills.

When their level reaches 30 or higher, you can spend 50% of their EXP to change one of the skills that he has.

The skills you learn will be decided at random, and you can try changing the skills again when your Worker reaches Level 30 with 50% EXP. 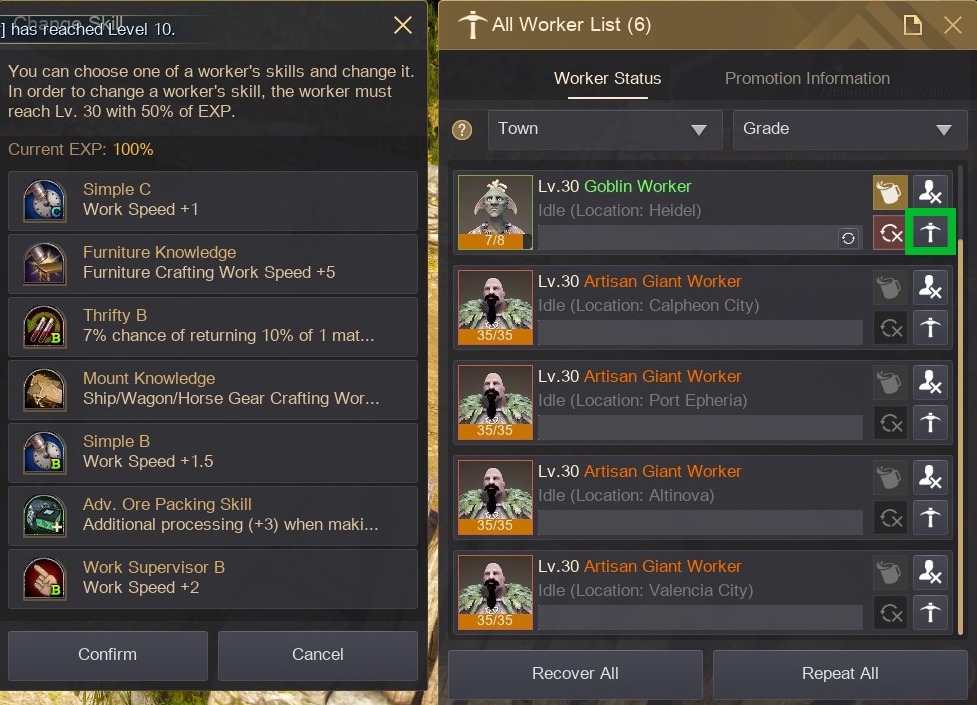 ▲ If your Worker has more than 50% EXP and is above level 30, you can change skills.

You can use the Worker Exchange function through the Work Manager NPC.

You can register the Worker who is on standby or hire other Adventurer’s Workers.

Their basic cost is different depending on their level, and the cost goes up with their skills and levels.

When you hire a Worker from the Worker Exchange, you need to check what kind of skills that the Worker has and which town they are affiliated with.

When you hire a Worker below Artisan level, you also need to check how many Promotion Tests the Worker can take in the future. 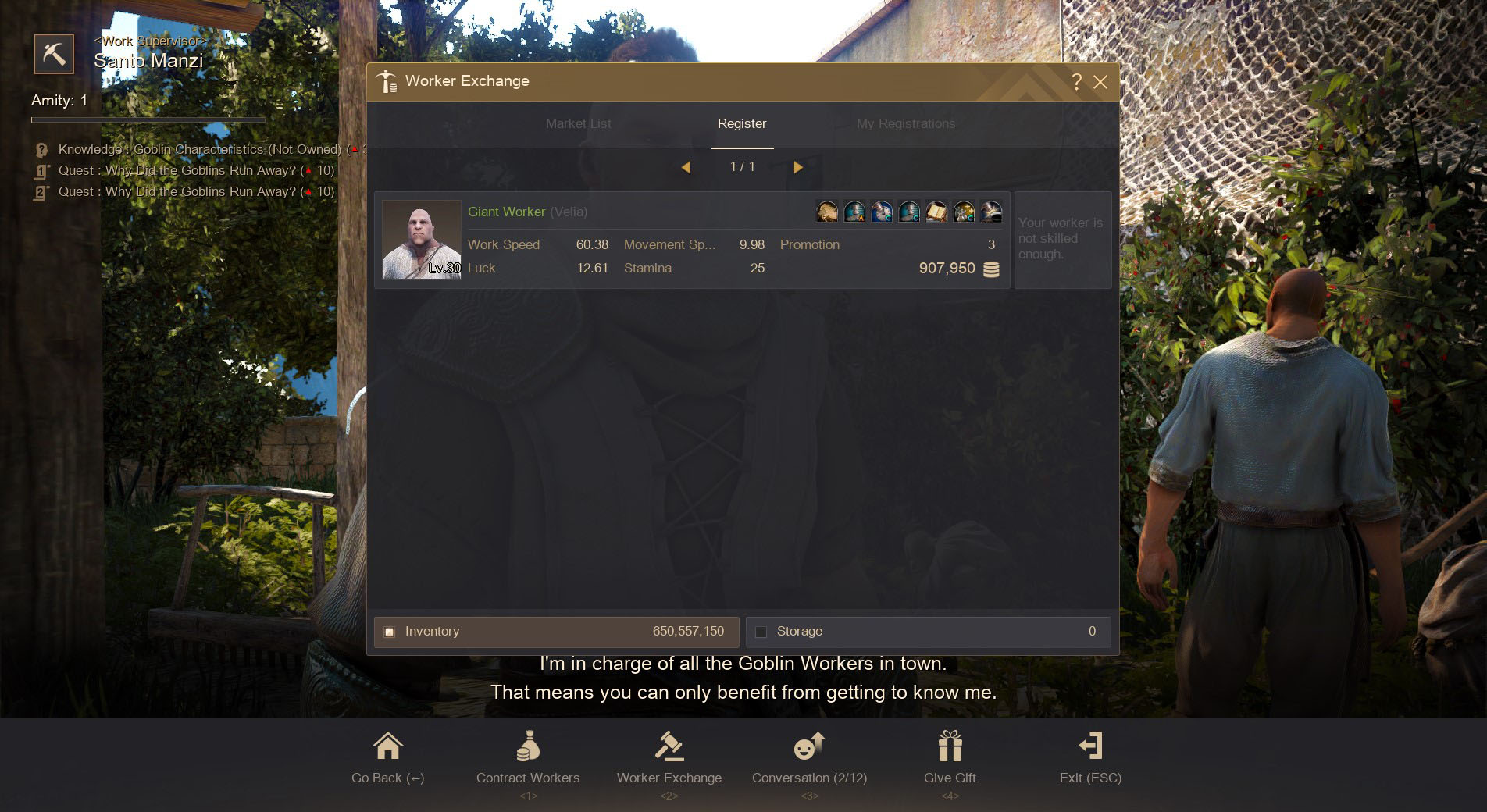