Last Edited on : Oct 7, 2022, 14:35 (UTC)
Black Desert’s minimap looks like a miniature version of a satellite map, and it offers useful information.
Just by looking at it, you can see your surroundings at a simple glance. 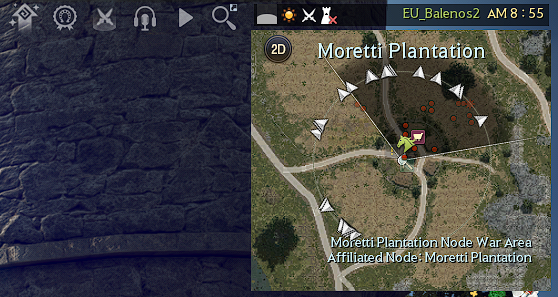 ◈ What Can Be Seen in the Minimap?
The minimap displays all NPCs, including villagers, guards, monsters, animals, and much more.
There are approximately 40 kinds of NPC display icons, and you can see their names when you hover over the icons with the cursor.

If you have a quest active, the region where the quest can be done is also displayed in the minimap. For NPC icons, the frontal 120 degrees you’re facing, the camera’s point of view, can be seen clearly, but everything else will display the icons faded out.
In the picture above you can see the icons for a mount and an NPC are seen clearly, while the ones for an NPC vendor and a quest are not.

The types and shapes of the icons displayed on the minimap are as follows.

In the Minimap UI you can adjust its scale and visibility.

To adjust the scale of your minimap, put the cursor on it and scroll with the mouse wheel or press the ‘+’ and ‘-‘ buttons in the top right of the UI.
Press the small button above those to reset it.

You can adjust the transparency with the slider on the right side, below the scale buttons.

The triangle shape on the lower left is used to adjust its size, and it can be adjusted by dragging the cursor after pressing it.

The magnifying glass icon on the upper left opens the Find the NPC window.
The NPCs you've met so far are organized by territory, and you can easily find them by using the search function.

If you hover over the NPC name, you can see the time of the day they’re active, your amity with them, amity goals, contribution point rental items, and more. If you click on the name of an NPC the navigation path to it will be displayed. 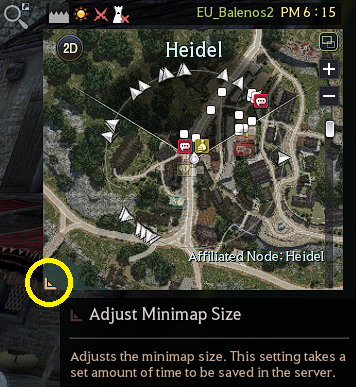 ◈ 3D Minimap
At the top left one can see a circle with 2D inside. Press it and the minimap will change to a 3D form.

Press it again, now when it says 3D, to change it back to its traditional 2D form.
When crossing elevated terrain such as mountains, the 3D map will automatically change to a top-down view to make sure you can continue to keep track of the terrain you’re traversing. 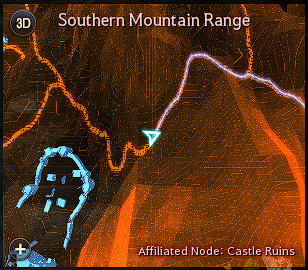 The ‘+’ button on the bottom left will expand the 3D view. While the 2D one can be expanded to the desired size, the 3D minimap only allows two set sizes.

The bar above the minimap displays information about the area you’re in, the server, and the time of the day within the game. The following information can be found there:

• Weather: Displays the current weather of the area you’re in. Depending on the weather, your character’s performance in combat may be affected.

– Clear: The skies are clear, and the weather has no effect on combat.

– Snow: AP is reduced in the snow. Drying processing is unavailable in the snow, and garden crops will not grow.

• Terrain: Displays the terrain where the character is standing. Movement speed and behavior can change depending on the terrain.

– Midair: While airborne, you will move as fast as your base speed.

– Desert: Movement speed of certain land mounts such as horses and wagons is reduced. It is recommended to employ camels and miniature elephants in the desert.

– Underwater: Movement speed is reduced to 30%.

• Area State: There are four types according to PvP status and penalty.

– Safe Zone: This area is not affected by PvP, and it is one of the main areas to revive your character in.

– Combat Zone: This area is where monsters appear and PvP is enabled. Death penalties are applied.

– Arena: The death penalty is not applied even if PvP is carried out, and this area state can be found in the arenas located in some of the main towns and cities. Instant resurrection is freely available without reduction of equipment durability. 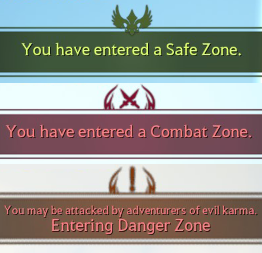 If you have the zone change alert activated, the game will let you know when you move from one to the next. Alternatively, you can check the difference between a safe zone and a combat zone by the area name seen in the minimap.

• Server Information: Displays the name of the current server where you are located. When you click it, the server list window will appear. From here you can move to other servers.

• Time: Displays the in-game time. This allows Adventurers to know whether or not an NPC is active, if certain monsters are out in the fields, or if Patrigio’s secret shop is open.

* The content of the game guide may differ from the actual game content, depending on the update and content changes.
Request to Update Adventurer's Guide
Minimap