In order to fight against the endless hordes of enemies in the world of Black Desert, the process of enhancing gear is very important.

This guide will provide information on gear from the most basic Naru set to the end-game gear, Fallen God's Armor and Labreska's Helmet, and even information on the best methods normally used by many Adventurers to enhance the quality of their gear.

You can obtain Naru gear as rewards in the beginning of the main questline to help new Adventurers adapt quickly. It is an essential type of gear required in your journey of gear attainment and enhancement, especially if you are a new Adventurer.

It is recommended for Adventurers who’ve obtained Naru gear to equip them and gather Beginner Black Stones, a material for their enhancement, to aim for a full set of PEN (V) enhanced Naru gear.

Also, you can exchange your PEN (V) enhanced Naru gear for either the more powerful Narchillan gear or PRI (I) Tuvala gear.

※ Check out the details on the guide on Naru gear.

You can exchange your PEN (V) enhanced Naru gear for Narchillan gear once per Family. They have stats comparable to TRI (III) to TET (IV) boss gear.

Equipping gear and accessories at the level of Narchillan gear and Capotia accessories will take you to the level at which you can defeat monsters in monster zones with a recommended AP of 240 such as Aakman Temple in Valencia or Forest Ronaros in Kamasylvia.

※ However, it’s normally recommended for season characters to exchange PEN (V) Naru gear for PRI (I) Tuvala gear. Check out the details regarding this from section 2-2.

Follow the steps listed below to obtain your Narchillan gear:

2. Reach Lv. 56 with your character or complete the Calpheon main questline.

3. Accept the quest, “[Special Aid] Fughar's Letter,” from the Black Spirit, then go to the NPC Fughar located in each town.

4. Accept and complete the consecutive quests relevant to the quest from Fughar, then exchange each equipment piece.

※  However, you must complete the Awakening questline to obtain the Canon weapon and to be exchanged for the awakening weapon piece.

※ You cannot exchange for Narchillan gear with a season character.

※ You can only exchange for Narchillan gear once per Family.

As long as you meet these requirements, you can obtain Narchillan gear from Fughar with ease.

If you can no longer equip the gear due to switching to and progressing another class, you can change the Narchillan gear into a box via the following method:

1. Purchase Narchillan Processing Stones from a blacksmith located in each major city (1 million Silver each)

2. Use Manufacture with Narchillan Processing Stone and a Narchillan weapon you want to convert into a box.

3. Open the Narchillan weapon box with another class to obtain weapons suitable for that class.

Tuvala gear is season-exclusive gear that can only be equipped by season characters.

However, after season graduation, you can use Conversion Stones on the gear to make them equippable by normal characters and can even exchange them for TET (IV) boss gear.

You could say the main goal for season characters is graduating after getting all Tuvala gear pieces to PEN (V) enhancement level.

The following UI will be displayed when you have succeeded in enhancing Naru gear up to PEN (V) enhancement level with a season character, and you can use it to exchange your Naru gear for PRI (I) Tuvala gear.

Also, you can obtain PRI (I) Tuvala gear via the following UI by opening the Equipment window. 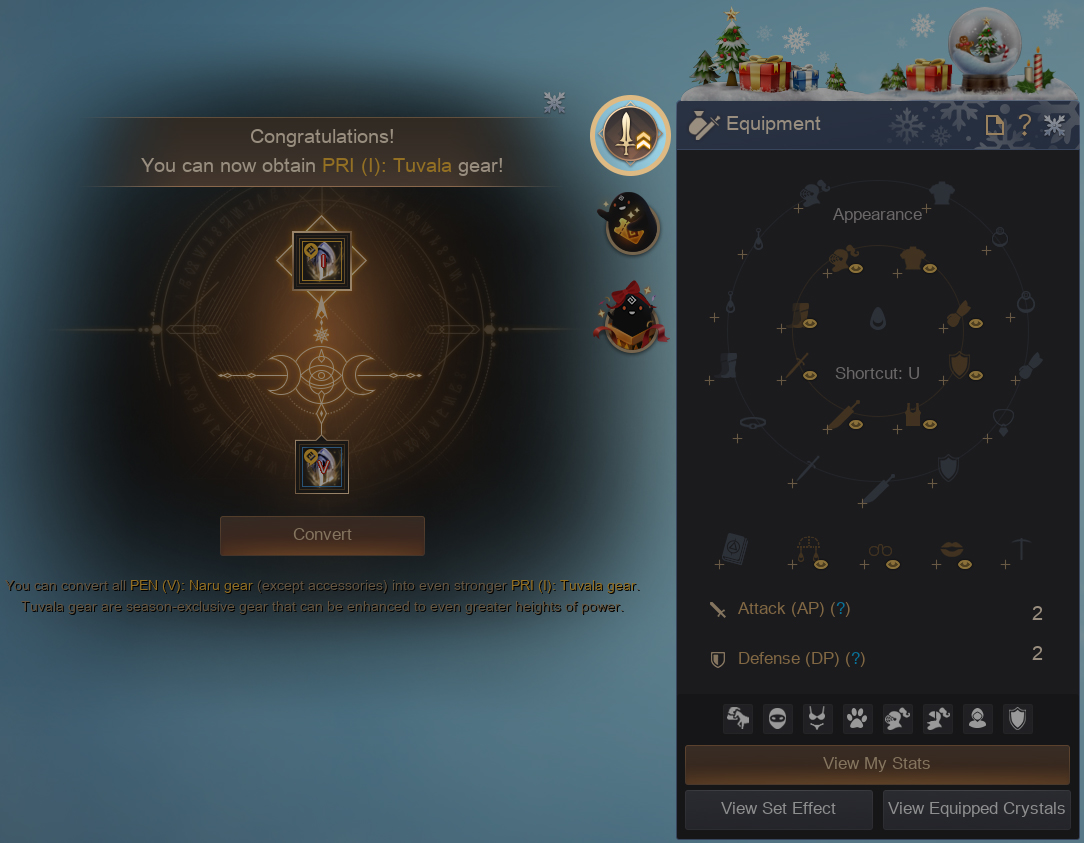 However, you cannot exchange a Naru accessory for a Tuvala accessory and can only obtain them by trading 5 Tuvala Ore to blacksmiths in each town.

- Tuvala Ore? An item used for exchanging, repairing, and enhancing Tuvala gear. You can obtain ore from defeating monsters on season servers and via season quests and challenges.

What is boss gear?

Boss gear is gear that can be obtained from a variety of World Bosses and Field Bosses and include the bosses’ name in the item name.

These types of gear have fairly high stats. Roughly speaking, it can be said that the performance of TET (IV) boss gear is either equal to or a little better than PEN (V) Tuvala gear previously mentioned. 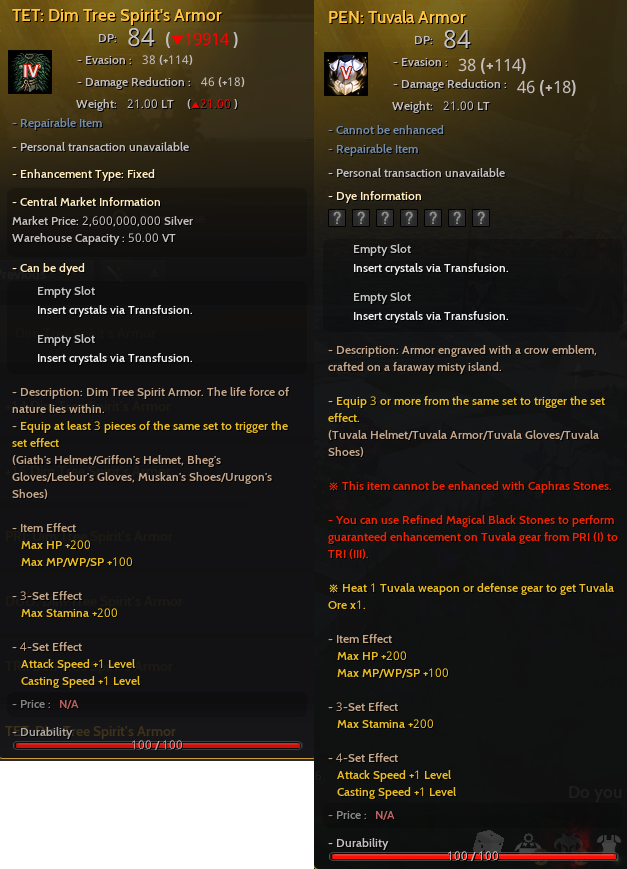 If you are an Adventurer with all the PEN (V) Tuvala gear pieces, first get TET (IV) boss gear, then aim for enhancing them up to PEN (V) enhancement level.

Does it feel like a very difficult goal to achieve beacause of the pressure you feel from the title, “boss gear?” It isn’t that difficult if you go through the process step by step.

First, if you’ve graduated from the season, you can obtain Conversion Stones for Tuvala gear, which you can use for each piece of gear.

Boss gear obtained from the quests for guaranteed PEN (V) boss gear are Family bound and cannot be registered on the Central Market or be sold. However, for armor and helmets, they will be converted into the Fallen God’s Armor and Labreska’s Helmet, which are top-tier gear, and will no longer be Family bound and can be registered on the Central Market.

How should you enhance the performance of your accessories that come after PEN (V) Tuvala accessories?

Accept and complete the quest for a guaranteed PEN (V) accessory.

It is recommended that you constantly accept and complete the quest for guaranteed PEN (V) accessories as a long-term task. This is a quest from which you can obtain one PEN (V) Ring of Crescent Guardian, Narc Ear Accessory, or Tungrad Earring once per Family.

However, as they are very valuable items that takes a while to obtain, you should be a little more patient and constantly make attempts. Take note that the three types of accessories to choose from can be exchanged once during the quest. It should also be noted that the most popular choice is the Ring of Crescent Guardian.

You can obtain one of the PEN (V) Capotia accessories as a gift for graduating from a season. They are items that perform as well as regular TET (IV) accessories and can be considered a tier higher than the PEN (V) Tuvala Ring.

You can obtain a special season gift by going to the NPC, Fughar, with a Lv. 20 or higher season character or a character that has completed the “[Season Server Graduation] Into the Big Wide World” quest.

Adventurers receiving the special gift for season graduation might not be sure which item to accept, but we strongly recommend selecting the PEN (V) Capotia Necklace. The Capotia Necklace has the greatest AP increase compared to the earring, ring, or belt.

Blackstar gear is more powerful than boss gear. Specifically, the gear has stats specialized for PvE.

You can purchase Blackstar gear from the Central Market or craft them via certain quests.

The Fallen God’s Armor and Labreska’s Helmet are known for having the highest stats in Black Desert and are the so-called “end-game” gear. 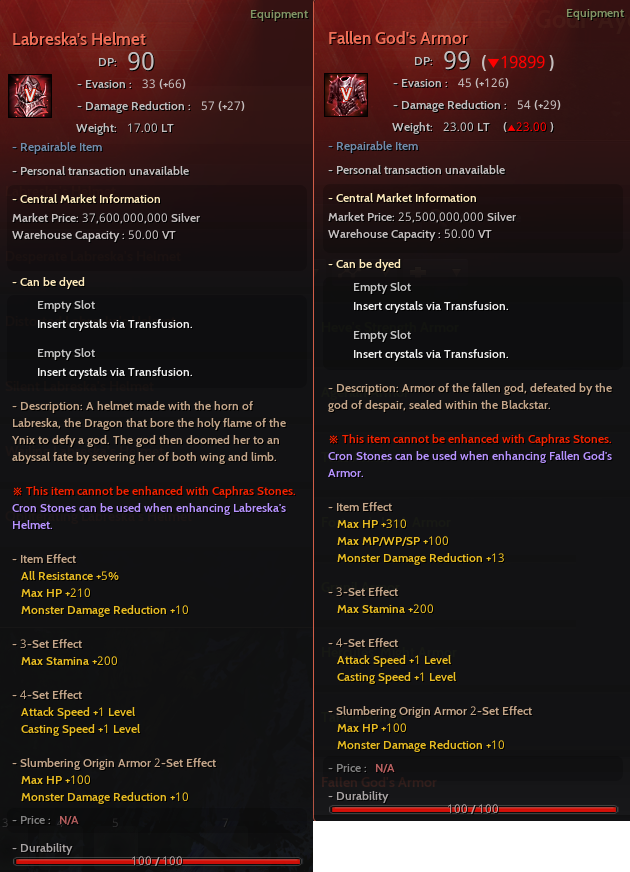 If you have come to the point where you have to either purchase or craft these items, you can consider yourself a fully-adapted Adventurer.

In order to craft them, you need very valuable items such as a PEN (V) boss defense gear piece enhanced to at least Caphras Level 10, PEN (V) Blackstar Armor or Helmet, Flame of Despair, Flame of Frost, etc.